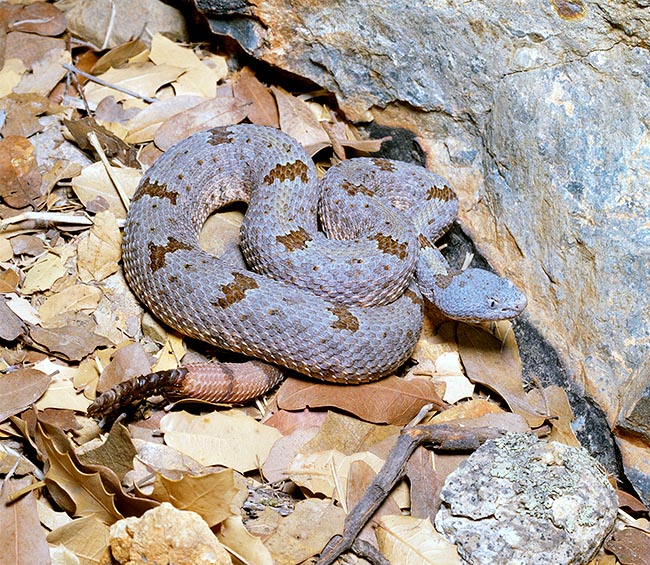 The Rock rattlesnakes, labelled with the scientific name of Crotalus lepidus Kennicott, 1861, are small viperids (Viperidae), afferent to the well known subfamily of the crotalides (Crotalinae) having an elegant look, as suggested by the Latin scientific name, “lepidus”, which, besides being a proper name of the old Rome, means something like “graceful”, “elegant”, or “coy”.

There are four subspecies.

Two of them are at home in Mexico: the Tamaulipan rock rattlesnake (Crotalus lepidus morulus) and the Durango rock rattlesnake (Crotalus lepidus maculosus) and two in USA: the Mottled rock rattlesnake, or Mottled rock rattler (Crotalus lepidus lepidus), a subspecies living in the eastern part of its range (southern and central Texas, Trans-Pecos), rightly characterized by a mottled livery, thanks to small pigmented dots, which, at times, get the shape of striae, and by a background colour often tending to the blue, grey-blue or green-grey, and the Banded rock rattlesnake (Crotalus lepidus klauberi), here shown, whose range is located more to the west, including the south-western part of Texas, a south-eastern part of Arizona, southern New Mexico and northern Mexico. Both subspecies, but, more specifically, the klauberi, are however present in small or medium sized mountain enclaves and not widely over all the territory, with a “leopard spots” distribution, as they are “enthusiasts” of rocky areas and predate on a relatively restricted variety of animals, primarily among all saurian belonging to the genus Sceloporus or American spiny lizards and on small rodents, such as mice, voles and young chipmunks.

Nevertheless, as it appears that when captive they accept a huge variety of foods and since the habits “in the wild” are fairly little known, it cannot be ruled that they may accept also other preys. They are small, from 40 to 60 cm, with record highs of 80 cm, and the background colour varies a lot, also depending on the area.

The herpetologist James Bear, tragically passed away in 2008 due to the bite of a Crotalus horridus, reported the following variants: in the Chiricahua zone, a marbled or mottled livery with silver and black shades, a black predominance on the Franklin Mountains, whilst other specimens show light blue, or lavender, or pink or green colours.

On these background colours stand out some well spaced bands, of dark colour, black or brown, and, among them, are often spread small dark spots which, however, are never so thick and close as is the case of the subspecies Crotalus lepidus lepidus. In any case, the overall appearance is always much elegant, similar to a jewel, and this has made this species much sought for and appreciated by the terrarium lovers specialized in venomous reptilians.

The head of the lepidus is triangular and distinct from the neck, also if less evidently than what happens in other crotalides, the eye has elliptic and vertical pupil, and, in fact, this serpent is of mainly crepuscular and nocturnal habits, even if it may be met during the day. 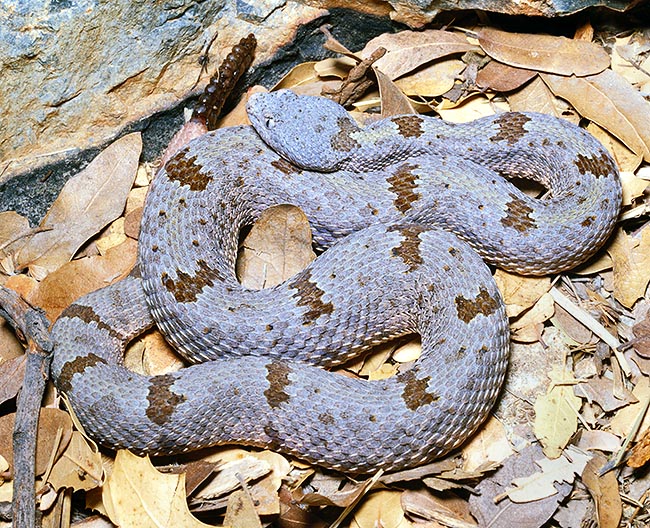 Shy and retired, it eats saurians and small rodents, reaching, calmly, even the 25 years © Giuseppe Mazza

A characteristic distinguishing it quite well (apart from the livery) from the Crotalus lepidus lepidus is the absence of the typical dark line going, in this last one, from the buccal rima to the eye.

The apex of the tail is often brightly coloured in yellow and perhaps such characteristic, as it happens in other species, might be useful for serving as bait for attracting within bite saurian of the genus Sceloporus, which often go around looking for brightly coloured caterpillars.

They are serpents with rather sedentary habits and rarely move more than a few tens of metres from the place where they were born, the spend often their whole (long) life on a single ridge, relief or slope, spending the day hours in a crack of the rock or warming up on stony grounds and often of the trails or on dirt or gravel roads, so much that the patrolling of these roads (also by night time, when the soil is still giving the sun heat) seems to be on of the research and seizure methods preferred by the lovers, and also the most profitable, seen the reserved habits of the concerned reptilian. It is especially after a rainstorm or a strong shower that these serpents get out in broad daylight, but, usually, they are shy animals and rarely emit the classical sound warning. Nonetheless, apart the size and shyness, they are animals not to be lightly taken, as their bite may reveal dangerous.

The venom, besides the cytotoxins, which cause skin and muscular necrosis, has an haemotoxic action, with possible seemingly paradoxical and opposite phenomena of haemorrhages and thrombosis, but it has also neurotoxins which, even if not so much strong as in other species of rattlesnakes (Crotalus durissus o Cascavel) and of many elapids, may worsen the symptoms and cause breathing and cardiac problems.

Particularly serious poisonings can be treated with polyvalent serum active also on other species, but the reported cases in medical literature are rare, due to the shyness of these serpents and probably concern more often specimens in captivity and persons handling them as a hobby.

Their reproduction is ovoviparous, therefore the female “delivers” young alive and active at the birth. The mating takes place once a year, and after 4-6 months the mother gives birth to 6 to 10 young, already endowed of venom and of an efficient venomous system.

A further odd and interesting characteristic is the longevity of these small viperids: often bigger animals do have a longer life than the small ones, but it is not always the case, and the Crotalus lepidus may live up to 25 and more years, third in ranking, among the crotalides, after Crotalus atrox and Agkistrodon contortrix (30 and 29 years respectively)…. maybe thanks to its retired and monastic life, as a hermit of the mountains, little prone to the stress and lover of its own privacy.