The Dactyloptena orientalis (Cuvier, 1829)  belongs to the class of the Actinopterygii, the ray-finned fishes, and to the order of the Scorpaeniformes: , that of the Scorpionfishes such as the well known Scorpaena scrofa,  often served in the restaurants, of the Red lionfish (Pterois volitans), frequent guest of the public aquaria, or of the extremely dangerous Starfish (Synanceia verrucosa) at times fatal for the divers.

It belongs to the small family of the Dactylopteridae  counting only 7 species, of which 6 belong to the genus Dactyloptena, and one, the Dactylopterus volitans,  present in the Atlantic Ocean and the Mediterranean.

The name of the genus Dactyloptena  comes from the Greek “δάκτυλος” (dactylos) = finger, and “πτενός”  (ptenos)  = winged, with reference to the big pectoral fins, whilst the specific name orientalis  = eastern, in Latin, refers to the geographical location, east to France, where lived Georges Cuvier, the famous French naturalist who described it. 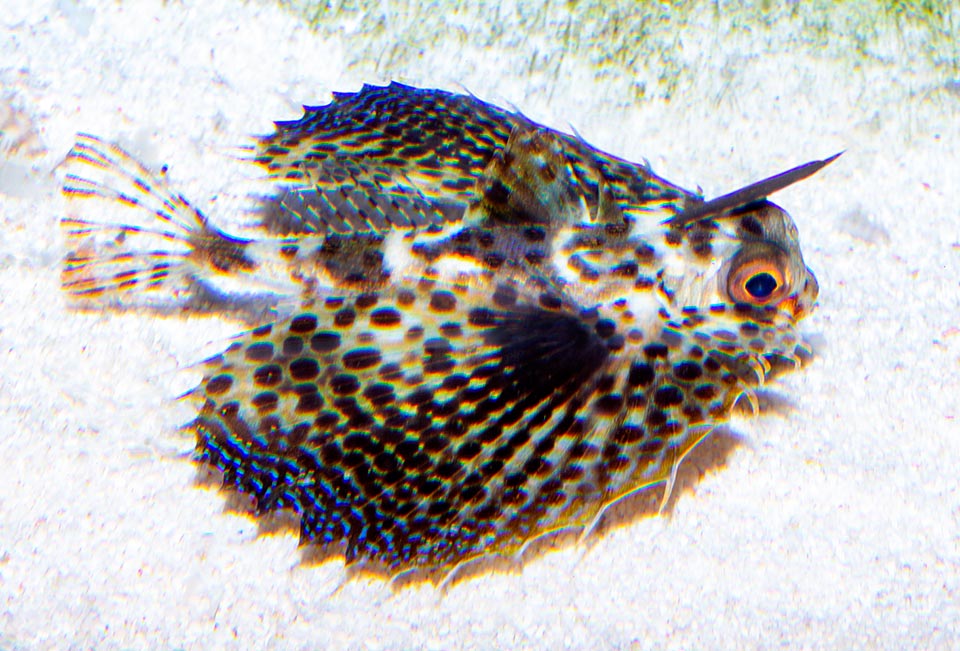 The Dactylopena orientalis is a benthic fish, that is, moving on the bottoms up to 100 m of depth in the tropical Indo-Pacific waters © Giuseppe Mazza

The Dactyloptena orientalis   has a very vast distribution in the tropical Indo-Pacific.

Indicatively, starting from the Red Sea, it is present along all African coast, from Somalia to South Africa, including Madagascar and the adjacent islands of Comoros, Mayotte, Réunion and Mauritius. Then, we find it in the Seychelles, Maldives, India, Thailand, Malaysia, Indonesia, Vietnam, Philippines, China, Taiwan and even further north, up to Korea and southern Japan.

In Oceania, after Papua, New Guinea, Australia and Vanuatu, then southwards, it reaches New Caledonia and New Zealand. Eastwards, after Fiji and Samoa, has colonized French Polynesia, the Marquisas, Hawaii and Pitcairn islands. 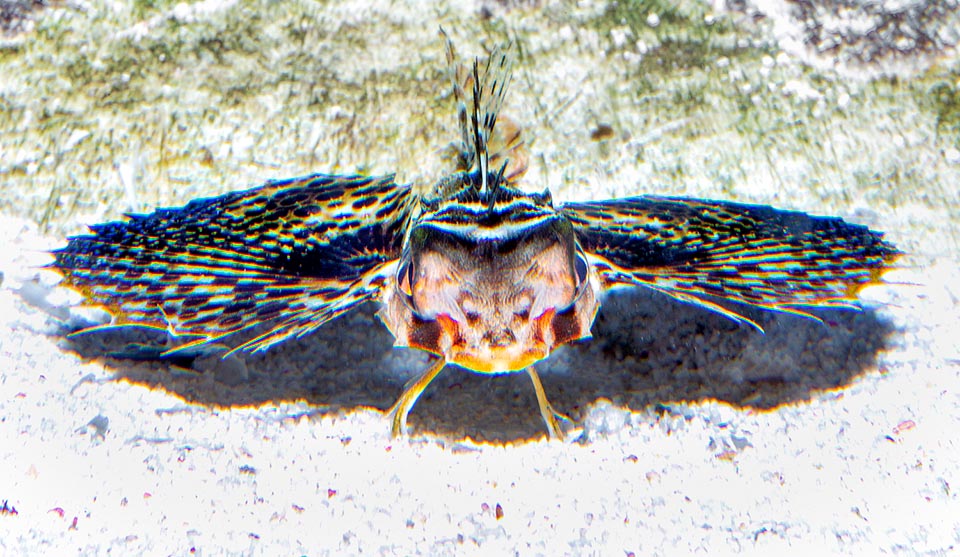 The pelvic fins, as occurs in Dactylopterus volitans, a Mediterranean and Atlantic relative, have transformed in legs © Giuseppe Mazza

This is a benthic species, that is living on the bottoms up to 100 m of depth, but usually goes down much less, so that it’s possible to find it even in only one metre of depth.

It usually loves the clastic and sandy places. The presence of madrepores and algae matters little, provided that the zone is rich of crustaceans, molluscs, especially bivalves and of small bottom fishes belongiong to its diet. It often fequents also the estuaries waters.

The Dactyloptena orientalis  can reach the length of 40 cm, but generally measures 20 to 30 cm. 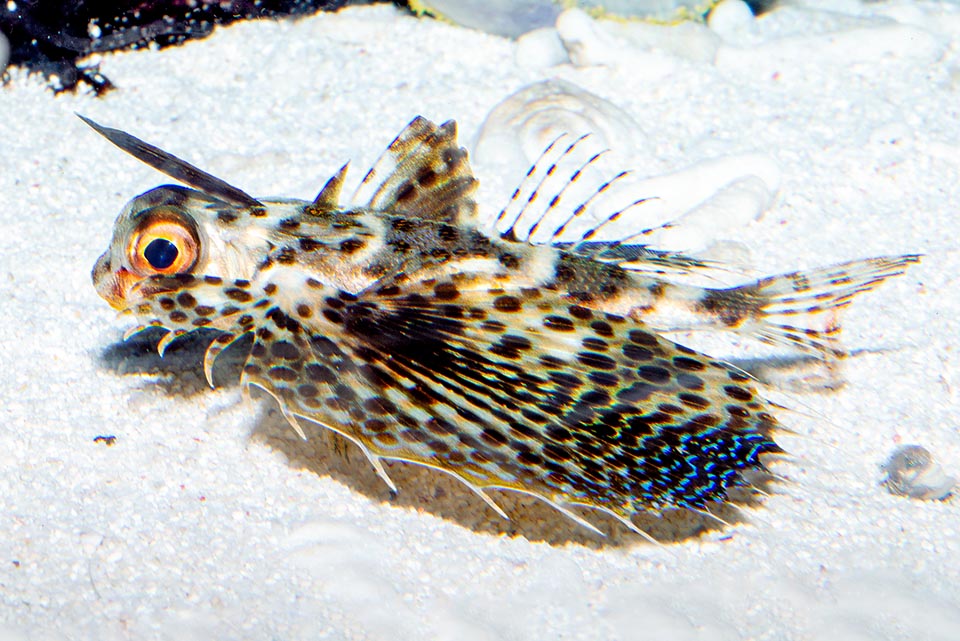 The head is massive, stocky, with bone plates and big protruding eyes, with under a red dot, more or less wide, that may extend up to the pointed snout. The mouth is protractile and the conical body is protected by hard scales quite spiny. Close to the gills we note rwo hooked spines.

The back has 4 fins. The first is a sort of vertical antenna just behind the head, then follows a low spiny fin and then two more showy ones: the first one has 6 spiny rays and the second 8 soft ones. Totally, we count then 7 spiny rays and 9 soft.

The big pectoral fins, folded back to rest on the body, can open like a folding fan to form 2 semicircles. They have 32-35 unarmed rays with an elegant final thin extension that breaks the contour of the fish. The first 5 rays are separated from the rest and form multipurpose appendages, sensorial organs that help the long and solid pelvic fins in the movements on the bottom. As a matter of fact, these have 1 spiny ray and 4 unarmed dissociated, used like legs. 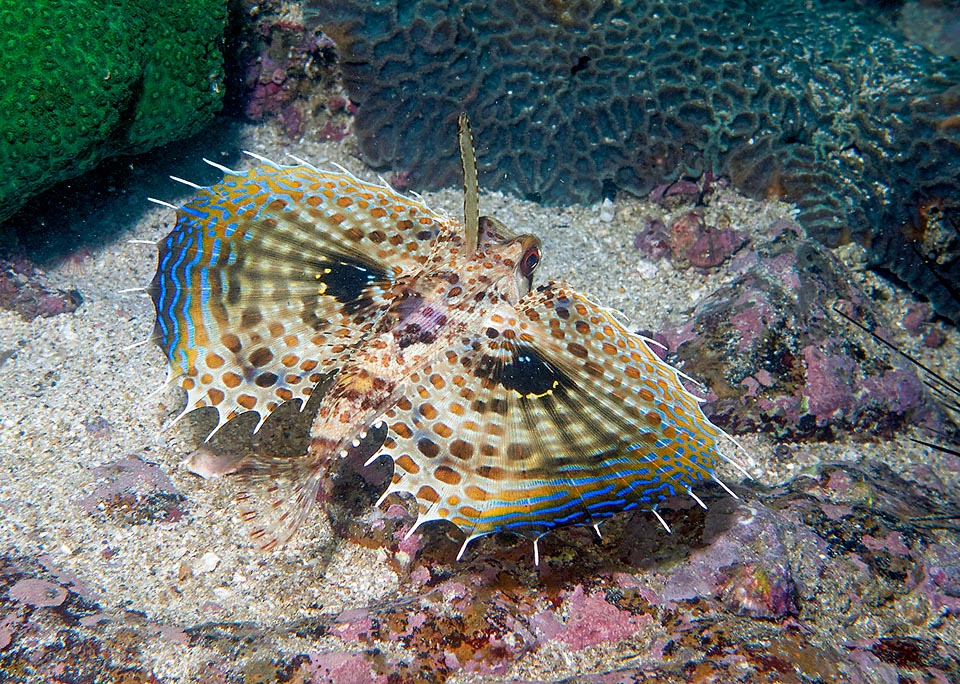 If facing a danger, it fully opens the surprising pectorals to look bigger and if not enough, using them as wings to quikly glide to deeper waters © 114°E Hong Kong Reef Fish Survey – Gomen See

The Dactyloptena orientalis  practically does not need to swim, as to catch the small crustaceans and fishes moving around on the bottomit is sufficient to wait for them passing by. It spreads the pectoral ones in circle only in case of danger to look bigger in the eyes of the eggressor, and, just in case, to run away in deeper waters using them mainly as wings for rapid glidings.

The livery is decidedly mimetic. On the background colour of the body, greyish brown at times with red shades, in fact we note several pale and dark spots, present also on the translucent caudal fin and the great pectoral ones that have even several brown ocelli to end in the second half with a wide elegant border formed by wavy brown lines, brown, blue and black near the filiform extensions.

Active during the day, but also the night, the Dactyloptena orientalis  is mainly a solitary species, at times coupled, especially during the reproductive period. 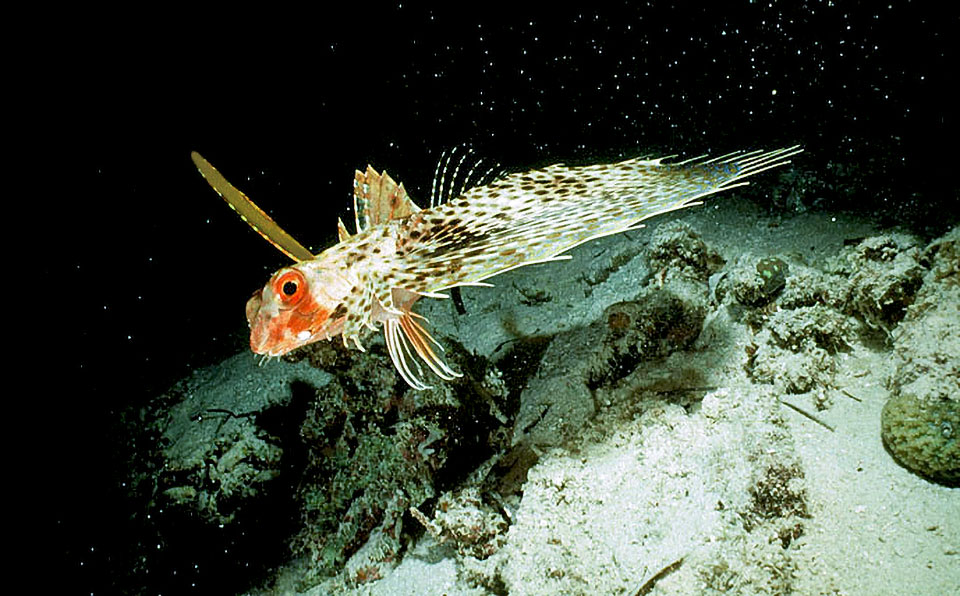 Swimming adult seen from side. It’s a fish that can reach 40 cm of length, though usually does not exceed 20-30 cm © Robert Yin

After the fecundation, the eggs go up fastly to the surface, because they contain a floating oily liquid. The larvae, carried by the currents, grow among the waves in small schools. The pectoral fins are then very active, so much to allow the small fishes to quickly dash out from the water to escape the predators.

Even if at times it goes into the nets or is fished young for the aquaria, the Dactyloptena orientalis  is not an endangerd species. The resilience is excellent with populations that may double in less than 15 months the vulnerability index is nowadays (2020) very low, marking only 18 on a scale of 100.