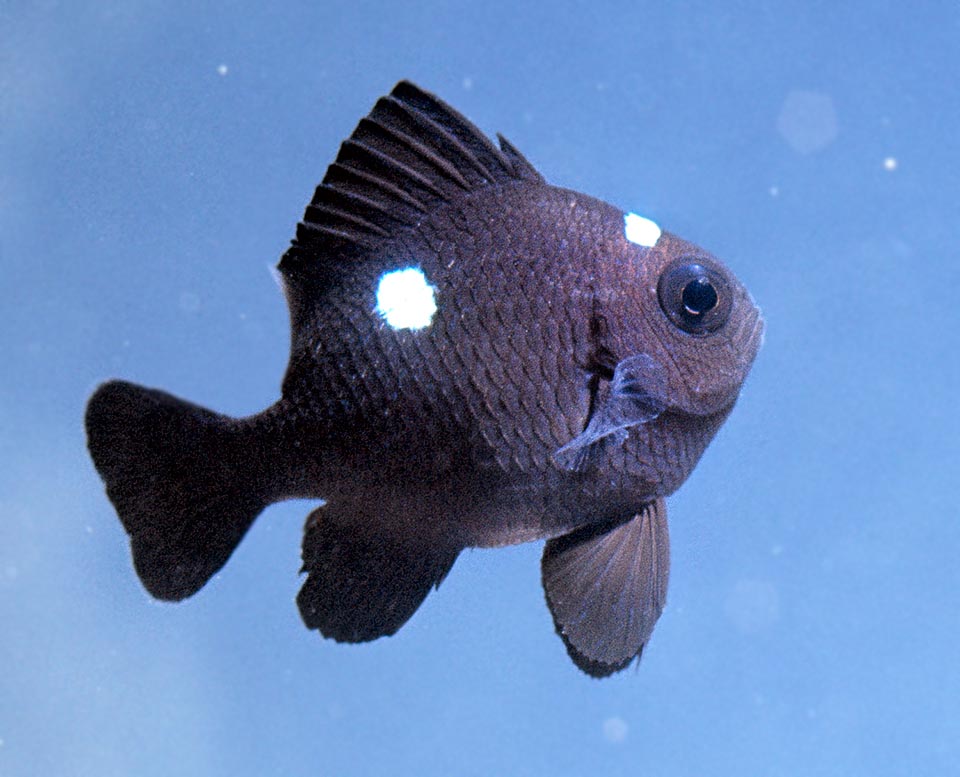 The young Dascyllus trimaculatus, with 3 showy white spots on black background, ressembles to the clownfishes and like them live among the sea anemones tentacles © Giuseppe Mazza

The Dascyllus trimaculatus (Rüppell, 1829) known as Threespot dascyllus, belongs to the class of the Actinopterygii, the ray-finned fishes, to the order of the Perciformes and to the family of the Pomacentridae that counts 29 genera and more than 400 species, among which the Damselfishes and the well-known Clownfishes.

The name of the genus Dascyllus comes from the Greek “δάσκιλλος” (daskillos) = a fish of which Aristotle talked, whilst the specific name trimaculatus = with three spots, in Latin, refers to its livery. 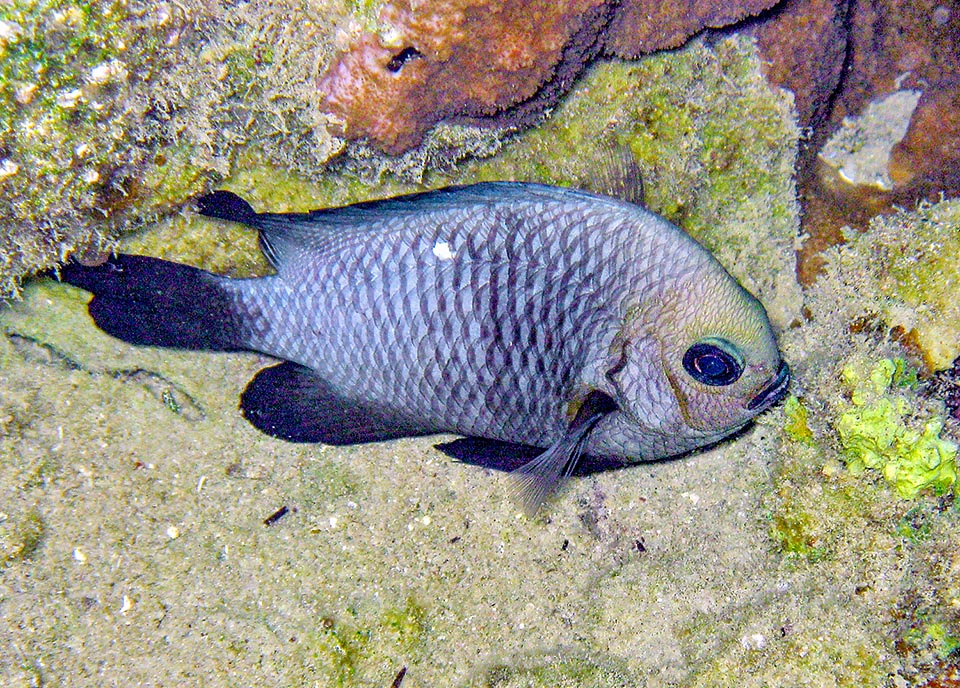 The adults, with brown or greyish livery, are surely less attractive. The spot on the back has disappeared and the lateral are just bigger than a scale © Gianemilio Rusconi

The Dascyllus trimaculatus has a very vast distribution in the tropical Indo-Pacific. Indicatively, we find it in the Red Sea and then along the African coasts up to South Africa, Madagascar and adjacent islands including the Seychelles. Then, in the Maldives, in India, Sri Lanka, Thailand, Indonesia, Papua New Guinea, and northwards in the Philippine islands, Vietnam, Taiwan, China and Japan. Finally, it has colonized also all Oceania, from Australia and New Caledonia to the Cook Islands, Fiji, Kiribati, without however, reaching the Marquesas islands and Hawaii. 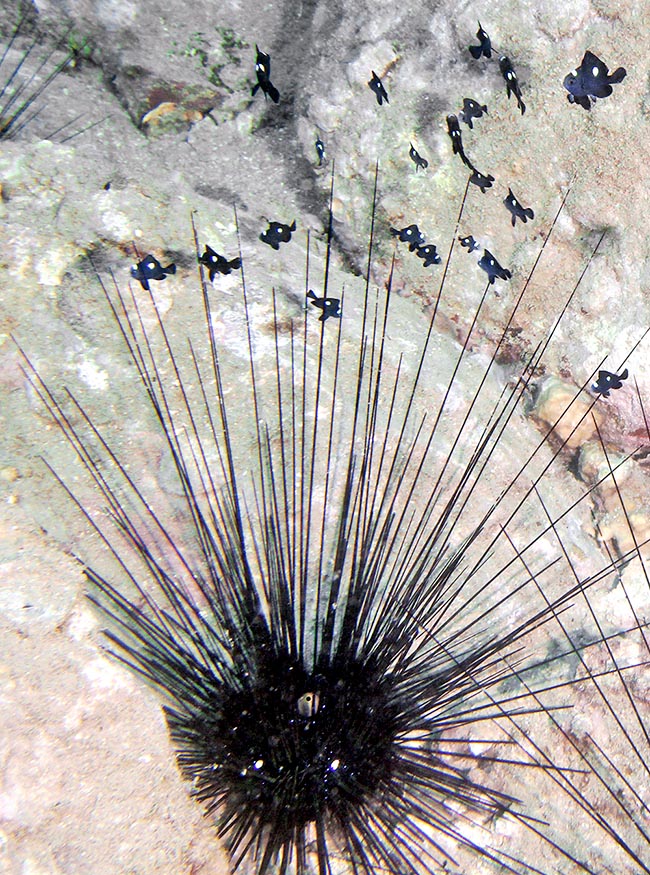 This fish swims between 1 and 55 m of depth. It lives among the madreporic formations and along the rocky coasts, in the calm waters of the lagoons but also in the inner side of the reefs. The adults escape the predators often getting shelter in the sharp ramifications of the Pocillopora damicornis or similar species of the tropical sea urchins, like the Acropora setosum, or growing symbiont, like the Amphiprion among the vertical arms of the sea anemones. They are by sure, not difficult and well regarded by 8 species of anemones belonging to the genera Entacmaea, Heteractis, Macrodactyla and Stichodactyla.

There is a remarkable difference between the juvenile livery, black with three well visible white spots, and the adult where the frontal spot is absent and the lateral ones are often so small to be barely seen. In the adults the colour can rapidly change depending on the mood. They are mostly brown but there are forms with yellow head and the chest orange and in the reproductive period are present greyish males.

The Threespot dascyllus is a gregarious diurnal species that swim even in schools of 60 individuals. It nourishes of plankton, small invertebrates and algae, without ignoring, if it’s the case, the eggs of other fishes, including larvae and fry.

Though in a quite less strong way than the Hypsypops rubicundus, as indeed other Pomacentridae, the Dascyllus trimaculatus can emit sounds to defend itself or to attract the attention of the females during the reproductive period, when is swimming in a characteristic way, leaping, showing the zone cleaned for the nest. The female lays even 25.000 eggs stuck to rocks or branches of coral, as usual in this family of fishes, keeps them the watch until the hatch, for 3-4 days, aerating them with the fins to avoid the outcome of molds. 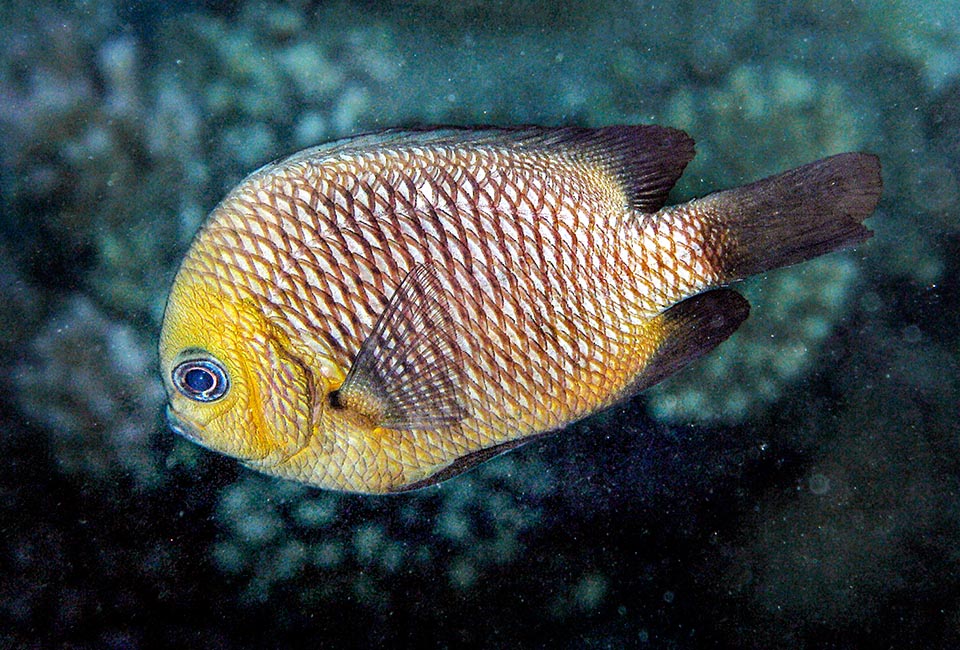 There is a colour variant with yellow head and orange chest. The Dascyllus trimaculatus is easy to feed and reproduces in captivity © Gianemilio Rusconi

Inexpensive, robus and easy to feed, the …. is a frequent guest of the domestic aquaria and has often reproduced in captivity. There is even a report about a couple that in 7 months has laid eggs 17 times. In nature the populations decimated by the events can double their members in less than 15 months and therefore it is not an endangered species today (2020). The vulnerability index presently marks 24 on a scale of 100.