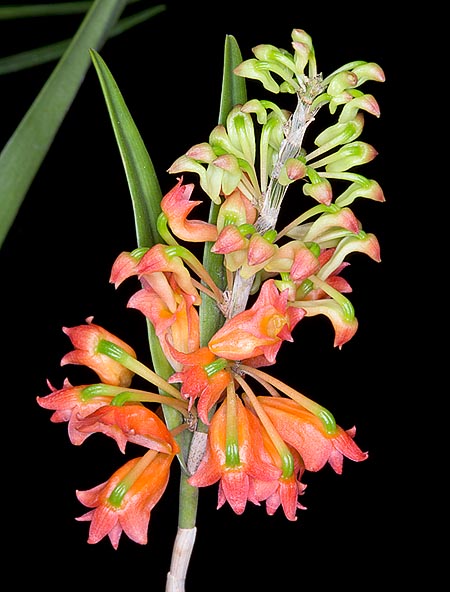 Rare in cultivation, Dendrobium faciferum is at home in the Moluccas, Lesser Sunda Islands and Sulawesi. The sessile inflorescences, with 2-5 flowers, follow each over the other at the upper nodes of the ripe pseudobulbs © G. Mazza

The species is native to Lesser Sunda Islands, Moluccas and Sulawesi where it grows in the coastal forests and at the margins of water streams at low altitudes.

The name of the genus is the combination of the Greek substantives “δένδρον” (dendron) = tree and “βίος” (bios) = life, with reference to the numerous species of the genus living on the trees; the etymology of the name of the species is not clear.

The Dendrobium faciferum J.J.Sm. (1908) is an epiphytic species with erect cylindrical pseudobulbs, up to about 60 cm long, which have over the base a fusiform grooved enlargement without leaves, acting as water reservoir for the dry periods, then thin and provided of lanceolate, alternate, distichous, coriaceous glossy green leaves. Sessile inflorescences from the upper nodes of the ripe pseudobulbs, with and without leaves, carrying 2-5 orange red flowers, 3,5 cm long and of 1,5 cm of diameter, with oblong-triangular sepals, the two lateral ones, merged at the base of the column form a sort of long spur (mentum), oblong petals and trilobed labellum.

Fairly rare species in cultivation with small flowers, produced in abundance along the pseudobulbs, lasting about 10 days. Requires high luminosity and medium-high temperatures, 25-32 °C, in summer, slightly cooler in winter, with minimum night values not under the 16 °C, high humidity, 65-80%, and a good and constant ventilation.

The waterings must be regular and abundant during the growth period of the pseudobulbs but leaving to dry up before giving water again, moderate and spaced during the vegetative stasis. For the waterings and nebulisations is to be utilized rain water, from reverse osmosis or demineralised; the fertilizations, duly distributed and alternated, in way to avoid salts accumulation at the roots, are to be done during the vegetative period preferably with hydrosoluble balanced products, with microelements, at ½ - ¼ of the dosage suggested on the package. It can be mounted on bark, trunks, rafts of cork or of arborescent ferns roots, or cultivated in pot with much draining and aerated compost in order to allow the roots to quickly dry up after each watering, which may be formed by medium sliced bark fragments with possible addition of inerts for improving the drainage. Transplants and repottings are to be done, when necessary, by the vegetative restart.