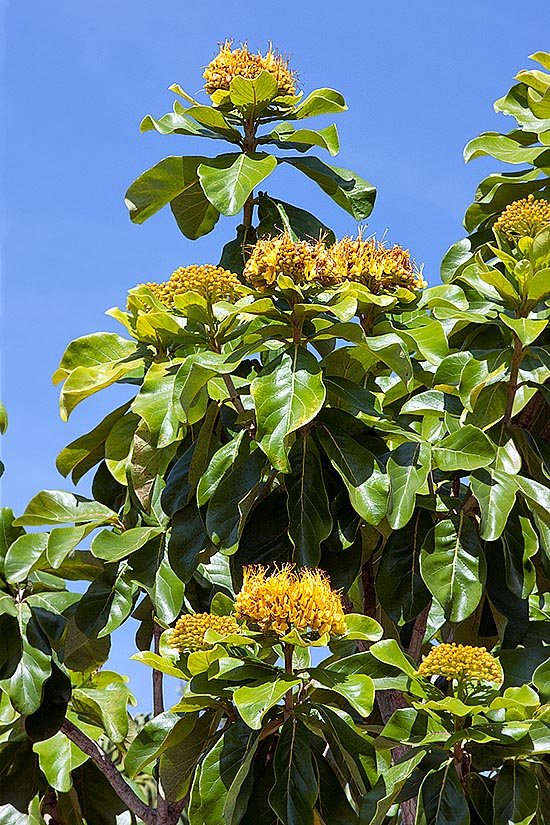 The species is native to Australia (Queensland) and New Guinea, where it usually grows along the sandy coasts and at the margins of the pluvial forests, from the sea level up to about 800 m of altitude.

The genus is honoured to the French naval physician and botanist Émile Deplanche (1824-1874); the name of the species is the combination of the Greek epithets “tettares” = four and “phyllon” = leaf, with reference to the leaves often placed in whorl of four.

The Deplanchea tetraphylla (R.Br.) F.Muell. ex Steenis (1927) is a shrub or a tree tall in the wild up to 20 m with tomentose branches and leaves, on a 3-5 cm long petiole, grouped at the apex of the branches, opposite or in whorls of 3-4 (circularly inserted on the same node), simple, obovate with wavy edge, up to 30 cm long and 15 cm broad, coriaceous, of glossy intense green colour on the upper page, opaque yellowish green with veins in relief and two glands at the base, below.

Terminal inflorescences with compound raceme, round, up to 30 cm of diameter, flat, with a crowd of bright yellow flowers having a particular shape, the corolla is funnel-shaped, laterally compressed and bilabiate, obcordate upper labellum, trilobed lower labellum with lower concave lobe, and 4 long stamina, erect or slightly reclined; the flowers are rich of an amber to dark brown coloured nectar which gathers in the lower lobe of the corolla and attracts mainly birds, bats and small animals who act as pollinators.

The fruits are flattened woody follicles, up to about 15 cm long, greenish when ripe, containing several roundish seeds surrounded by a thin semi-transparent papery wing, of about 1,8 cm of diameter, which fosters their dispersion through the wind.

It reproduces by cutting and by seed, which is to be interred as soon as possible, having limited germination duration, in sandy soil, or added of perlite, kept humid and at a temperature of 22-24 °C, with germination times of 3-6 weeks.

One of the most ornamental trees of the Australian spontaneous flora due to the huge leaves and the typical inflorescences, fast growing, it can be cultivated exclusively in the tropical and humid subtropical climate zones, being fairly sensitive to the low temperatures, in full sun and sheltered from the strong winds which would cause damage to the foliage. It requires well drained soils, preferably sandy, from slightly acidic to slightly alkaline, rich of organic substance; adult plants may stand drought periods. Utilizable as isolated specimen, in group or in rows, of great effect as road tree, it tolerates well the prunings and the sea sprays, it can be employed therefore also close to the sea.