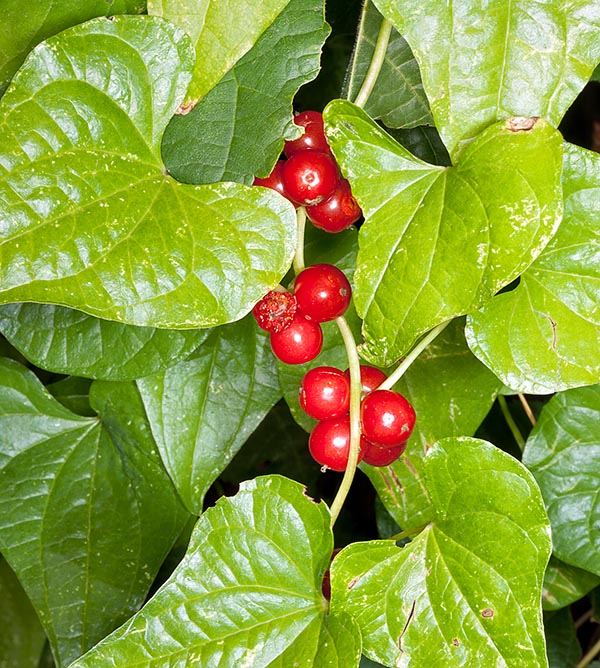 The Black bryony (Dioscorea communis (L.) Caddick & Wilkin, (2002) ex Tamus communis L. 1753) is a geophyte with Euro-Mediterranean distribution, with home range corresponding to the distribution of the vine, that is, mainly of the countries facing the Mediterranean but widened north and eastwards. The genus Dioscorea includes more than 600 species distributed in the tropical and warm-temperate regions of the world, much known under the name of yams due to their alimentary importance.

The origin of the previous name of the genus Tamus (nowadays the plant is placed by the systematic botanists, seen the results of morphologic and molecular analyses, into the genus Dioscorea) should date back to the time of the ancient Rome: Pliny the Elder (23-79 AC) and later on Columella (first century AC) did indicate with “tamìnia” a climbing plant or a vine (black bindweed, blackeye root).

The name of the species comes from the Latin “communis”, and means common, diffused, known.

Conversely, the genus Dioscorea is honoured to Pedanius Dioscorides Anazarbeus (from Anazarbus, city of Cilicia, Asia Minor), famous botanist, and herbalist physician of Greek culture who lived in the first century BC.

The fruits, merged on ornamental garlands, are spherical (poisonous) 1 cm berries, permanent till the winter season (if they are not predated by the birds which provide for the dissemination on a vast extent of this species) with persistent residuals of the perigonium, glossy, initially green, scarlet red when ripe. Each berry contains (3) 6 globose seeds of red-brick or brownish colour. 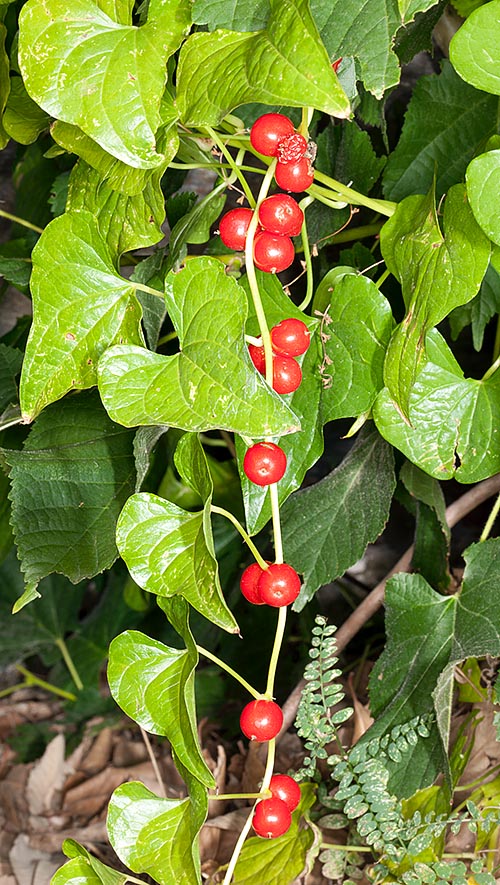 It’s a toxic species, but precious for the beats © Giuseppe Mazza

It is a species diffused in the thick woods, coppice, thickets, clearings, hedges, especially in the hills and on calcareous soils, from the plain up to 800 m of altitude (in Sicily up to 1400 m).

The sprouts of the black bryony, which often have shades of bronze as well as the stems and the young leaves, are collected in many zones like those of the hop which distinguish mainly due to the non cylindrical section, the opposite leaves and the roughness (if rubbed between the fingers from bottom to top) and consumed after boiling.

Even if much of the toxicity and part of the bitter taste are eliminated with the cooking, it is right for us to suggest, however, to limit the use of this grass, in quantity and frequency, recommending always a suitable boiling.

The herbal medicine employs the root collected in September-October containing starch, oxalates of calcium and potassium, phenanthrene, batatasin I, a histamine-like substance, steroid saponins, diosgenin (molecule with structure similar to that of the progesterone), yamogenin, vitamn C, traces of tannins. The decoction, the extract or the tincture have anti-inflammatory, diuretic, emetic, purgative, haemolytic and vulnerary action on the urinary system.

The internal use of the plant, nowadays almost abandoned, must be submitted to a strict medical control seen the toxicity and the irritant capacity of some of its components, whilst for external use some topical-revulsive preparations may be employed, in lieu of those based on Arnica montana, for producing local vasodilation which favours the resolution of inflammatory processes by increasing the blood flow, the phagocytic defences and by stimulating the peripheral nervous system.

These preparations (decoction and tincture of Arnica, extract of pulp of root of Black bryony) are utilized to relieve rheumatic and arthritic pains, and also in the therapy of contusions and bruises. In France, the plant of the black bryony is also known under the popular name of “Herbe aux femmes battues”, which means grass for the battered women, rightly for the curative uses of its tuberiferous roots.

The contact with the pulp of the roots or of the ripe fruits can cause dermatitides due to the penetration, in delicate and sensitive skins, of the needle-like crystals of oxalate of calcium and the presence of histamines.

To prepare with 100 grams of crushed pulp of whole root (radix and cortex concisa) macerated in ethyl alcohol at 80 °C for 4 days.

→ To appreciate the biodiversity within DIOSCOREACEAE family please click here.