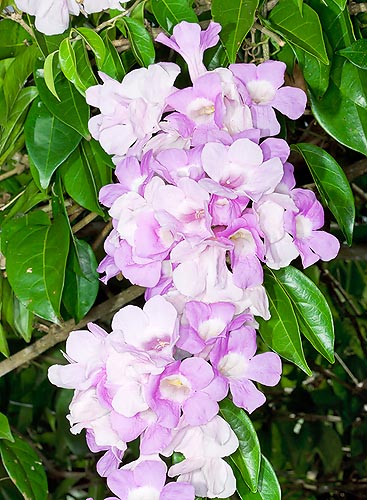 The Distictis laxiflora (DC.) Greenm. (1898) is native to the deciduous woods located at mid altitudes in Mexico (Chiapas, Oaxaca, Puebla and Veracruz), and northern Nicaragua (where it was probably introduced).

The name of the genus is the combination of the Greek names “dis” = double, and “stiktos” = dotted, spotted, with reference to the double row of brown seeds which resemble to marks on the internal sides of the capsule; the name of the species is the combination of the Latin names “laxus” = wide, spaced, and “floreo” = to bloom, with reference to the disposition of the flowers in the inflorescence.

Fast growing, evergreen woody climber, provided with tendrils by which it attaches to the supports; it shows leaves provided with two ovate leaflets of a glossy intense green colour, 4-7 cm long, and terminal inflorescences carrying several tubular-bell shaped flowers, 5-7 cm long and 3-5 cm wide, with a scent which much recalls the vanilla one; the colour, initially dark lavender, turns, with the time, to pale pink or cream white. The fruit is an about 9×3 cm, woody, elliptic capsule, containing winged, thin, 10×25 mm, brown seeds. It propagates by seed, by semi-woody cutting in summer, or woody cutting in spring.

Little spread climber, in spite of its ornamental characteristics, suitable to tropical, subtropical and, marginally, in sheltered locations, also to warm temperate climates, the aerial part gets in fact damaged at temperatures of about -3 °C; adult plants can bear temperatures of a few degrees less, losing totally the aerial part, but growing again from the foot in the following spring.