The White grouper (Epinephelus aeneus Geoffroy Saint-Hilaire, 1817) belongs to the class of Actinopterygii, the ray-finned fishes, to the order of Perciformes and to the family of Serranidae.

It is a species loving the warmth. Therefore, we find it in the southern waters of the Mediterranean, in Spain, Italy (Sicily, Calabria, Basilicata and Puglia), Greece and North African nations. Past the Strait of Gibraltar, it is still present along the Spanish and Portuguese coasts, up to Lisbon, and, southwards, along the entire African coast and the Canary Islands up to Angola.

Unlike most of the groupers, it prefers the sandy bottoms to the rocks. It is found among the prairies of Posidonias (Posidonia oceanica), but also offshore and in the brackish and muddy waters of the estuaries, which are mainly frequented by the juveniles. The adults swim usually between the 20 and the 200 m of depth.

Along the Italian coasts, it usually measures 50-60 cm, but in other locations it easily exceeds the metre, reaching the 120 cm, with a record of 25 kg of weight. 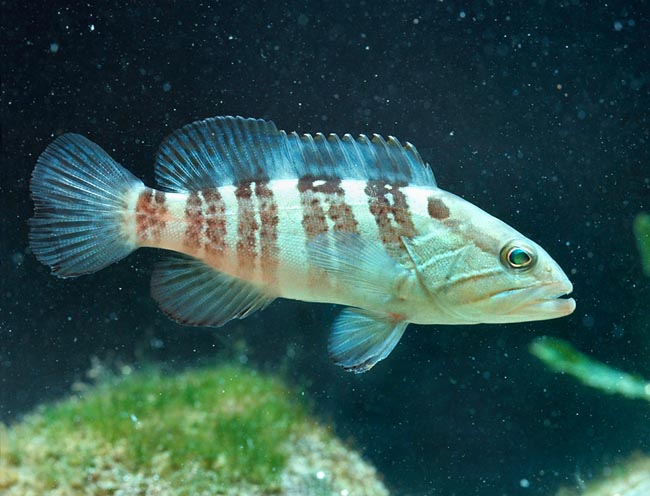 More slender than the other Mediterranean groupers, it does not have, in proportion, a less imposing mouth. Even if the mandible protrudes little, if compared to the Epinephelus costae or to Mycteroperca rubra, both jaws are well armed of teeth, with an analogous scheme as this last species.

Also the pectoral and ventral fins are similar, but whilst in the Mycteroperca rubra the caudal is concave, here, also in the adult specimens, it is always more or less convex.

The background colour is grey, greenish or light brown, with typical pale lines on the preoperculum and the operculum pointing towards the eye.

The juveniles have on the sides a more contrasted livery, with vertical bands clear and dark mottled by the evident camouflaging function, seen that they disappear immediately after the demise.

The preferred food of the white grouper is the fishes, mostly pilchards, to which we have to add a 20% of slipper lobsters, a 10% of crabs and a fair 10% of cephalopods.

Also this species shows a protogynous hermaphroditism, with females mature when 5-7 years old, when they measure 50-60 cm with about 3 kg of weight, which may transform in males by around the 10-13 years, with a length of 80-110 cm and a weight of 9-15 kg. The eggs, very numerous, are spawned along the coasts in spring.

There are periodical migrations between Mauritania and Senegal, where the fishing boats wait wildly for them to pass, and even if with the warming of the Mediterranean waters the white grouper is rising the Adriatic Sea, it is, unluckily, a declining species.

The vulnerability index of this species is of 52 over 100.