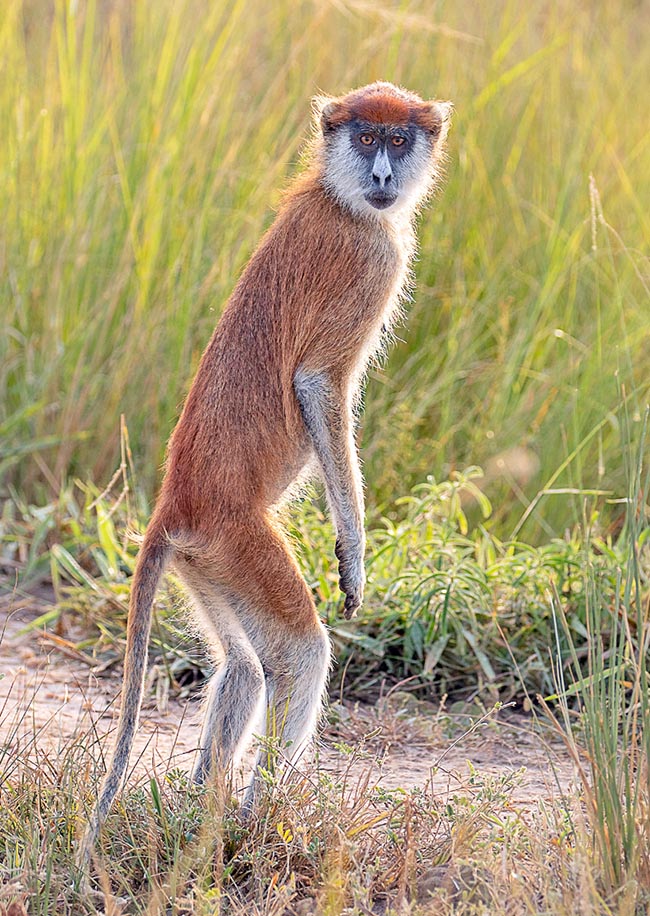 Erythrocebus patas male. This monkey adopts the bipedal posture if alarmed or is has something in the hands © Bruno Conjeaud

It belongs to the Cercopithecidae, the largest family of the primates; that of the well known Hamadryas baboon (Papio hamadryas), of the Red-shanked douc (Pygathrix nemaeus), or of the Mandrill (Mandrillus sphinx), rich of 24 genera and almost 140 species.

The generic name patas gets its origin, through the French language, from “uolof”, an epithet in the language of the Wolof, a population of West Africa.

The distribution area of the Patas monkey is formed by an ample belt of central Africa limited in the north by Sahara and south by the Equatorial forests, including the semiarid areas of Western and Eastern Africa.

The peculiar trait of the morphology of E. patas is the tail, not prehensile like the New world monkeys, but that can reach, by itself alone, the length of 75 cm.

Especially in the dimensions, we note a clear sexual dimorphism.

Moreover, the adult males have longer canines and at times also a more luminous hair; we note a dark blue scrotum, that could have a role in the competition for the access to the females but does not have any correlation with the age or the health status. Finally, during pregnancy, the females markedly change the colour of the hair on their face. 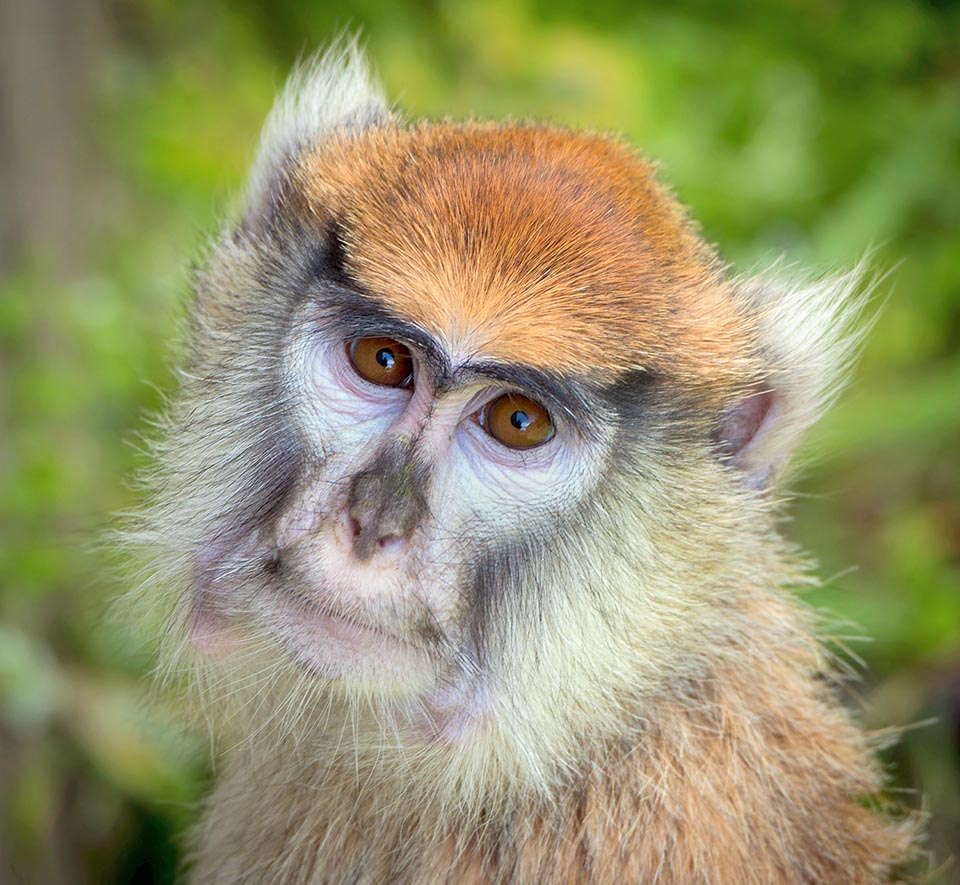 Old World catarrhine monkey, has very close together narrow nostrils and facing down. The face is a combination of light and dark tones © Wade Tregaskis

The nostrils are narrow, awfully close together and face downwards. In fact, the genus Erythrocebus belongs to the parvorder of the Catarrhini, that of the monkeys having the nose facing down, from the old Greek “κατά” (katá), facing downwards, and “ρινος” (rhinós), nose.

The long limbs, also of white grey colour, are made for an all-fours locomotion and make this monkey the greatest runner amongst the primates, able to reach a speed of 55 km/h. 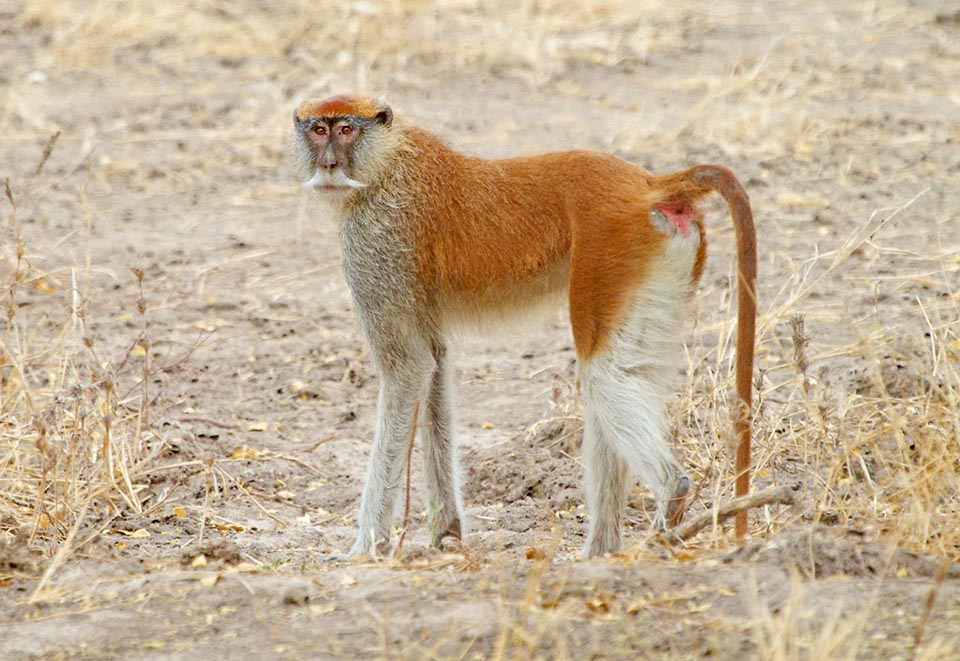 As the Erythrocebus name states, the mantle’s main colour is the fawn red. The particularly long tail can reach the 75 cm © Mark Piazzi

The hands and the feet of these primates are prehensile, with opposable thumbs. Occasionally, Erythrocebus patas can assume a bipedal posture. Usually, this occurs in the event of an alarm, to better observe the predators’ movements, and can advance upright, without any problem, if carrying something with the hands.

In nature the average lifespan of the Patas monkeys is about 20 years, whilst when in captivity it can reach 24. 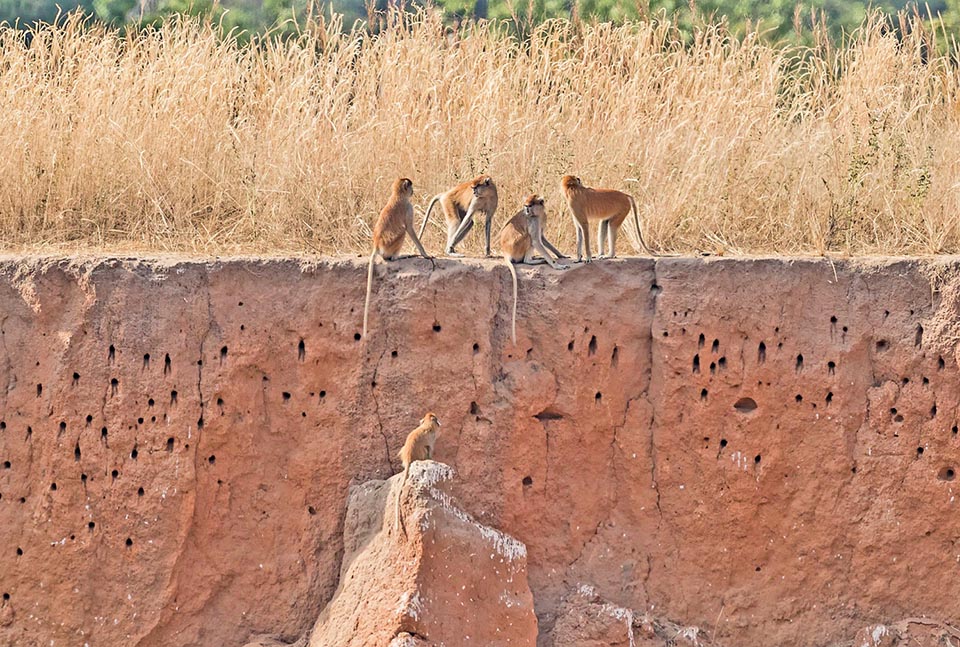 E. patas occupies a varied habitat. We find it in semi-desertic zones, in the savannah, in the prairies and in the forests with tall grass. Being mainly a terrestrial species, it loves the wide and open areas. The sites where it sleeps are almost always covered by big trees. Usually, each monkey has its own, but the mothers who sleep with their kids.

In nature, it has a wide home range of about 23-52 km², depending on the consistency of the group and the availability of food, water streams indispensable in the dry season. 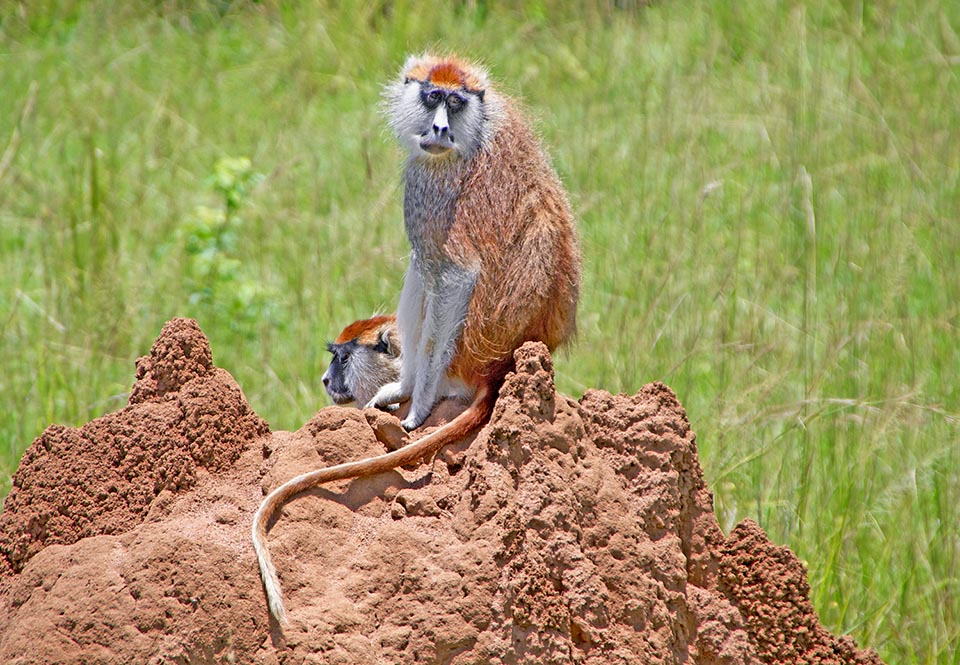 The Patas monkeys communicate with body posture and facial expressions. The contact callings are not frequent but in case of danger these monkeys have an alarm cry different for each predator and it is not rare to find lookouts observing the movement of savannah predators from the top of termites’ mounds © Luz D. Montero Espuela

The Patas monkey is an omnivore that mainly bases its diet on insects, fruits, leaves, roots, seeds and eggs of birds.

E. patas lives in social groups counting about 20 to 70 individuals. They are polygynous groupings, formed by numerous females who are the permanent members of the group. 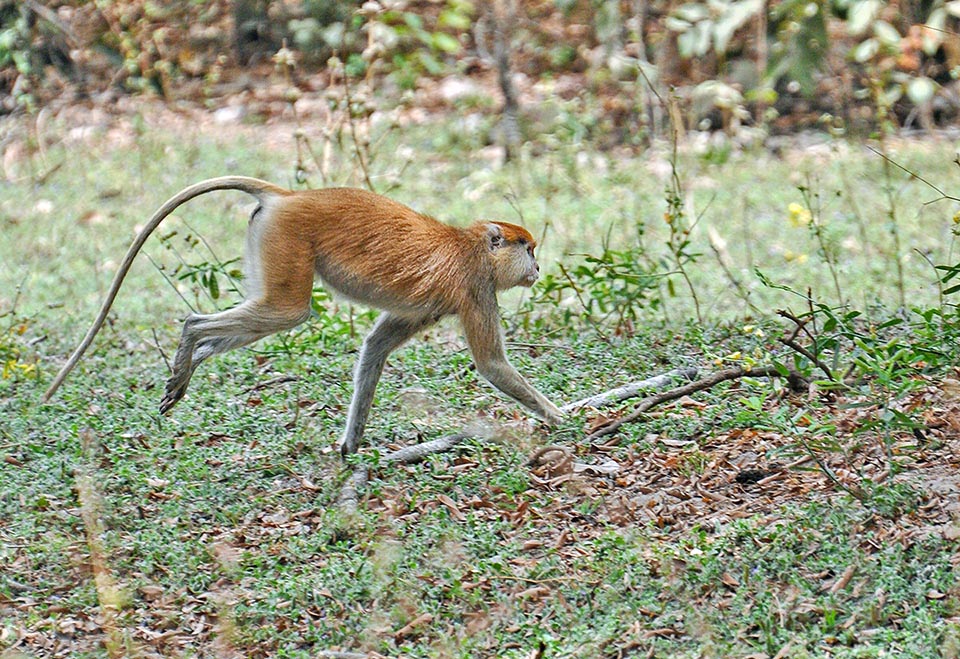 Slender as it is and thanks to its long limbs, Erythrocebus patas can escape very rapidly. It may reach 55 km/h, thus holding the speed record in the primate’s world © Philippe Boissel

For most of the year, when the females are not receptive, in these groups is present only one adult male and the group is stable.

The other males form in turn groups composed exclusively by males.

The social hierarchy is female and varies in the observed populations depending on the distribution of the food resources. 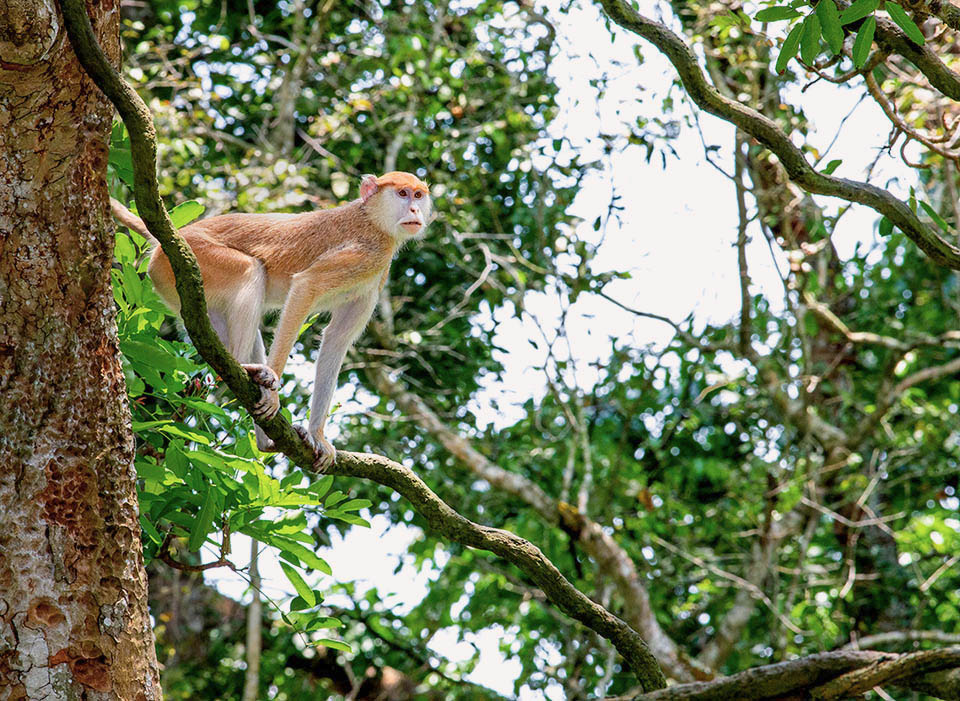 Patas monkeys spend the night in the trees. Ever monkey has its own, but the mothers sleeping with kids © Giuseppe Mazza

In the place where the quantities of food are concentrated, such as the orchards, there are higher rates of intergroup conflict and at the same time hierarchies and leaderships well defined inside the single groups, whilst where the source of food are insects, usually scattered, the meetings between groups and the consequent clashes are less probable. Thanks to the conflicts between females, it has been possible to establish the presence of the capacity of recognition between relatives via mother.

After a conflict, the females often reach a reconciliation that takes place by seating close or with grooming sessions. This behavior has been observed also between individuals having no family ties but is more frequent between relatives. 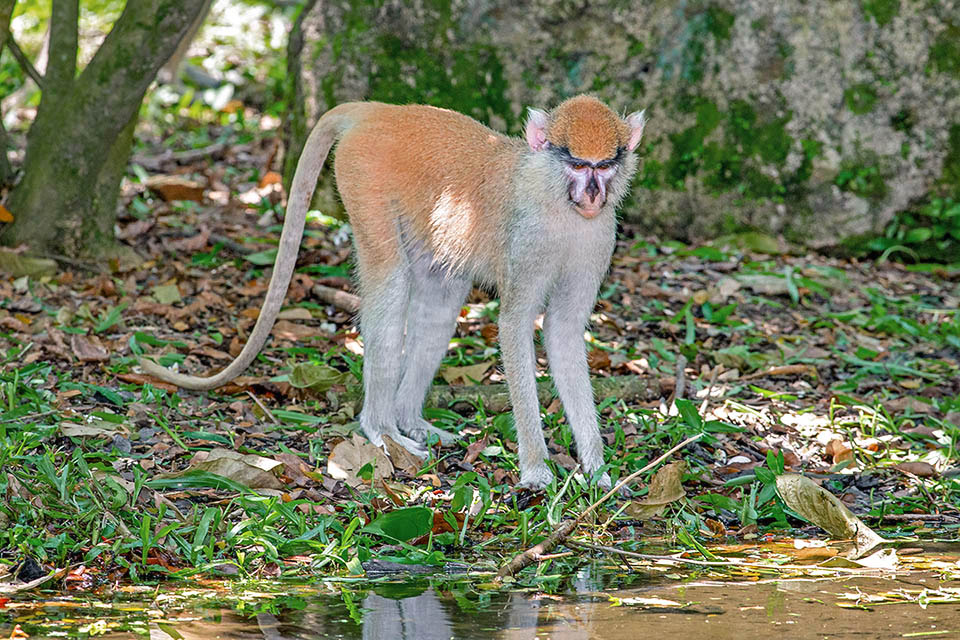 The groups occupy a 23-52 km² territory, with at least a water stream for the dry season. They mostly nourish of insects, fruits, leaves, roots, seeds and eggs of birds © Giuseppe Mazza

The females reach sexual maturity when 3 years old, males when 4-5. Mating is seasonal and takes place usually during the rainy season. 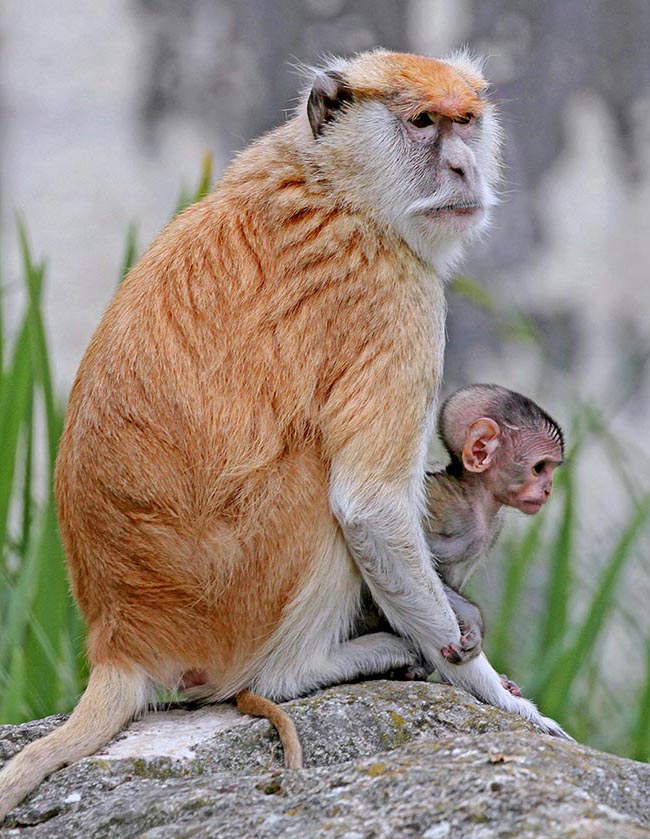 During pregnancy, the females markedly change the colour of the hair on the face. Upon birth the kids are black © Corinne Puch

Occasionally, some submissive adult males are tolerated by the resident male and remain in the group for a certain period.

The young males abandon the native group when 4 years old, once they reach sexual maturity, to join a group formed by adult males or, more rarely, to lead a lonely existence till when they will try to join a polygynous group during the reproductive season.

The aim of groups formed only by male adults could be that of protecting the young and sick individuals from the predators and other threats.

The competition for the reproduction is harsh, considering the different reproductive success between resident males and extra-group ones.

The mail waits for the female to approach it for mating and can have offspring from more than one female. It may also happen with a coupling of poly androgynous, promiscuous type, where males and females mate in a promiscuous manner.

The reproduction period seems to vary depending on the geographical location.

In some populations, the reproductive period goes from June to September, and the children will be born between November to January.

The gestation period usually amounts to 170 days, even if it is difficult to know precisely due to the absence of any external mark indicating the estrus. The females generate only one individual for each pregnancy.

For the females, the first conception occurs around the 2/3 years, when 3 the first delivery. Conversely, the males become fathers when about 5 years old, after a more or less long interval from the social maturity, because they cannot fit right away in a polygynous group, seeing the social dynamics of the species. 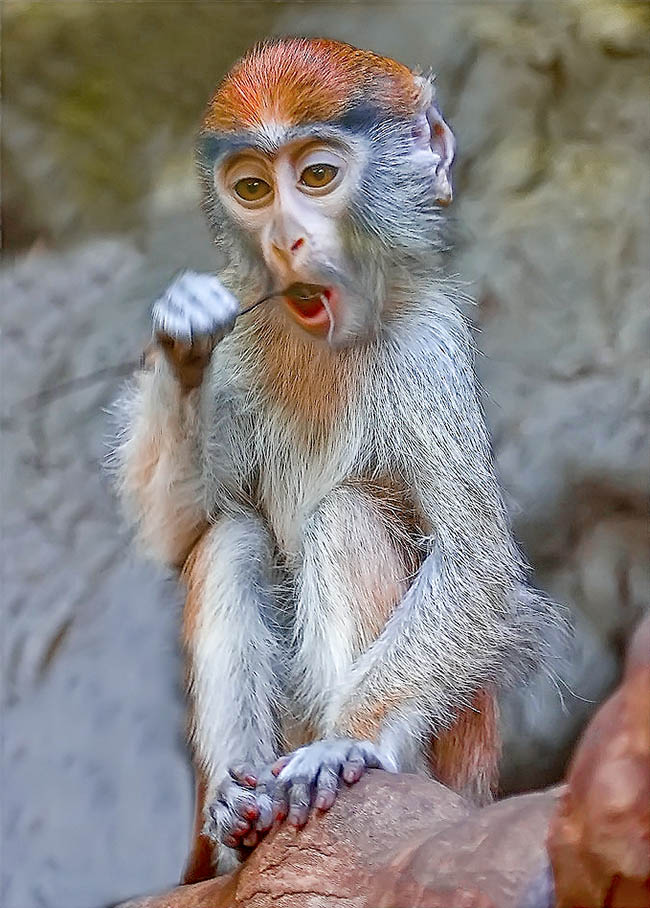 Only by the 3 months comes the typical reddish hair. This discovers a branchlet © Pere Soler

E. patas finds the food more easily in the dry season and this could explain the seasonality of its reproductive cycle. In fact, when in captivity, this seasonality does not take place.

The females take care of the small males till when they are not independent. Conversely, the female progeny remains in the group of origin, with their own mothers, for the whole life.

When they come to life the newborns are completely black and only when about 3 months old the typical reddish hair starts to appear.

During the first 4-5 months the young receive many cares and grooming (cleaning of the hair), and from the 12 months they can feed and to move independently.

In captivity, up to the 4th month, males and females get the same quantity of grooming and care from the mother. Then, for the females, these levels increase considerably.

This shows the strong matrilineal link among the adult females.

From the 5th month, the relations with the mother become more sporadic, almost limiting only to the night, when the mothers provide to feed the little ones.

The definitive weaning occurs when the mother delivers a new child, around the year of age.

All females are involved in the care and in the management of the little ones of the group, not only of their own children (allomothering).

The benefit of such a conduct could be related with the social hierarchy, based on who does or who receives allomothering, being able to create the social links as well as the group cohesion.

In captivity, it has been observed that the little females get more attention from the adult females not belonging to their own blood family.

In a long-term study, it has been noted that the child mortality by the first year of life is 20%.

The cleaning of the hair is an activity covering an important role in the social organization of the E. patas. 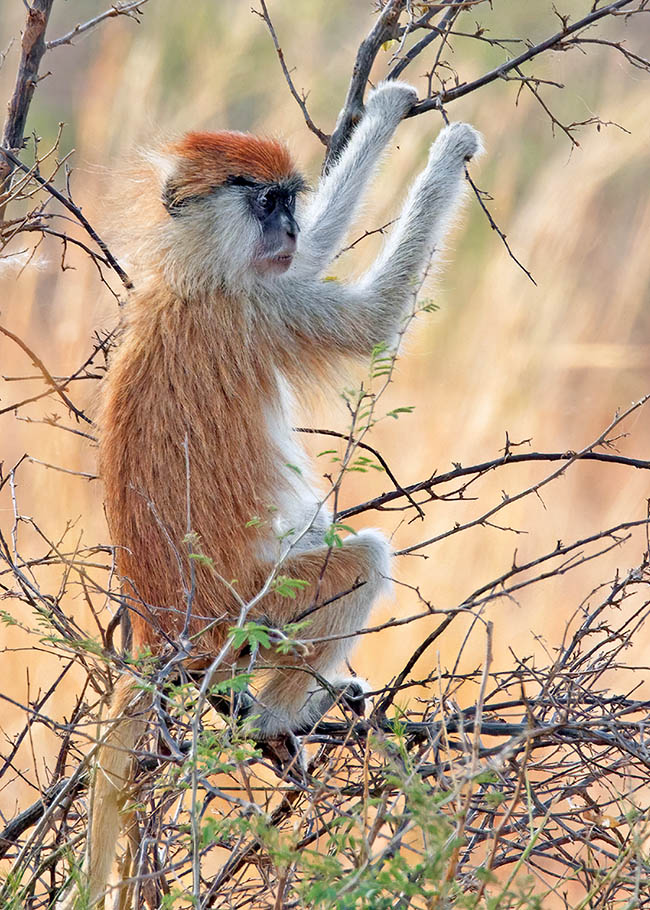 A young Erythrocebus patas between branches. It’s cuddled by all the females. When 8 months old it starts to play but final weaning occurs only when the mother gives birth to a new kid, when it’s about one year old © Sue Milks

This activity may indicate the hierarchy inside a group as well as the quality of the link between the concerned individuals. A social position high in the hierarchy reflects in a bigger frequency of received grooming.

The game behavior emerges by the 8 months.

Being a social species renders the E. patas a primate with developed communication skills, the posture of the body and the facial expressions are important communication elements.

The contact callings are not too frequent. The preference of a type of visual communication allows it to avoid competitive interactions between the groups. This can also be the result of the occupation of an open habitat that facilitates eye contact.

The warning signals are the most frequent vocalizations: these have the purpose of informing the other individuals of a danger and are predator specific.

Other kinds of vocalizations are those used in the context of the maternal care. The mothers use the “moo”, whilst the kids use the “want” for asking for care and attention of parents, non-parents, or of any individual who can grant attention and care.

In the African sub-Saharan savannah, E. patas is preyed upon by lions, hyenas, wild dogs, snakes, raptors and, sometimes, baboons. It is also hunted by human beings, sold as a pet animal or utilized in research.

The anti-predator strategies the Patas monkey applies during the day against the natural predators are based on the mimicry, the watchfulness, and the velocity in escaping.

Frequently, E. patas performs raids in the cultivations, stealing bananas, wheat, peanuts, and dates. The raids are grounds for retaliatory killings and represent a point of conflict destined to worsen over time with the territorial expansion of the human beings.

In accordance with what is reported by the Red List of the International Union for Conservation of Nature (IUCN), E. patas is however a species under a low risk of extinction. 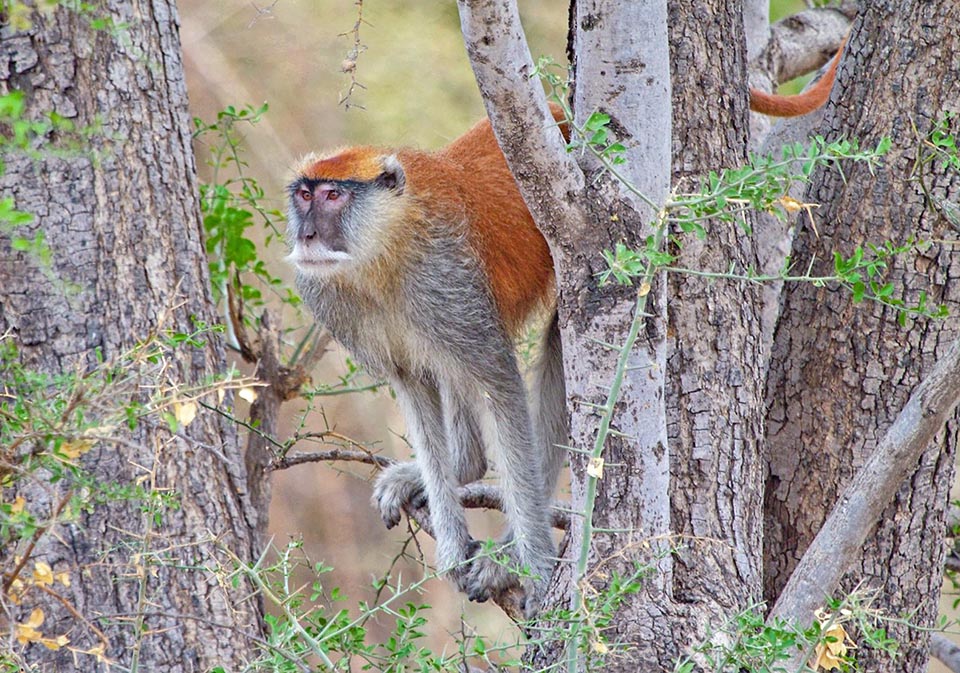 There is a clear sexual dimorphism. Males are much bigger than the females, with longer canines. Every group has its king, but the social hierarchy is female and once young males reach the sexual maturity, by the 4 years, are sent away. They often form male defense groups, hoping to integrate in a new group during the reproductive time © Mark Piazzi

Erythrocebus patas was last modified: May 25th, 2021 by Peppino