The plants with naked flowers. Genus Euphorbia counts over 2.000 species of many different kinds. From cactus like trees to grass in the fields. In common they have the strange structure of the flower. 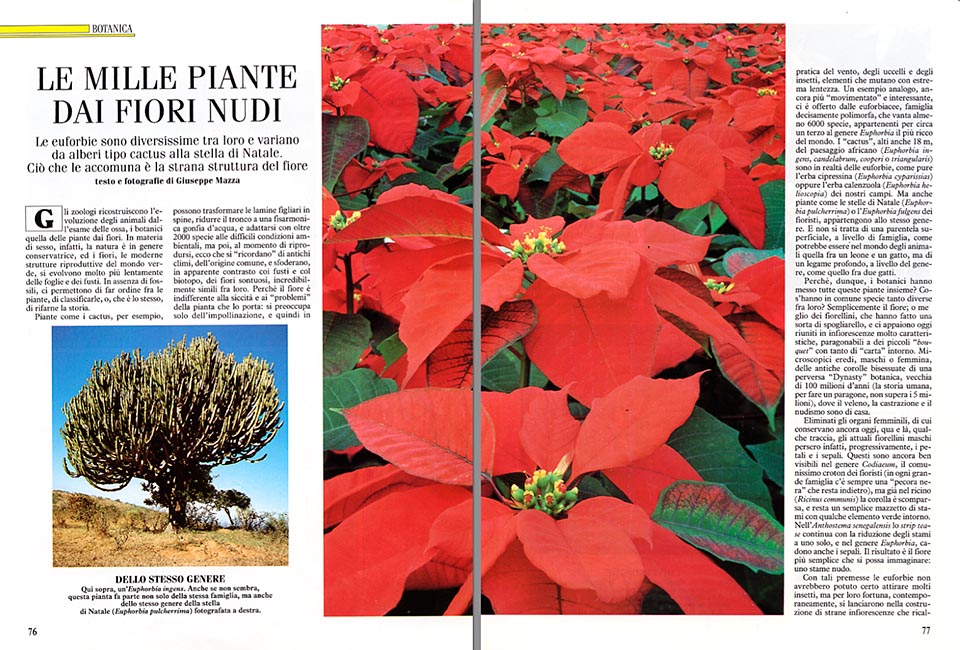 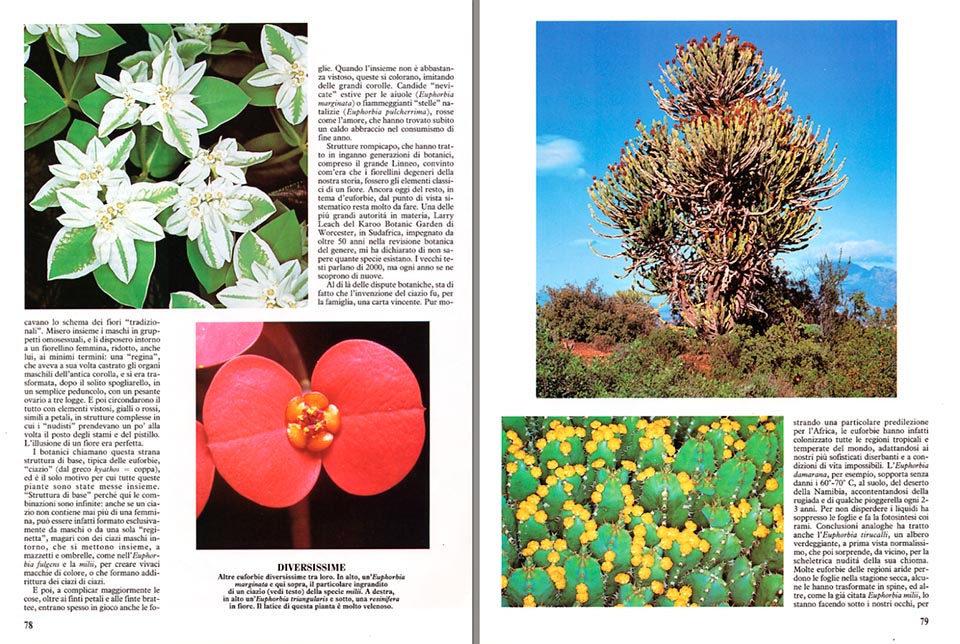 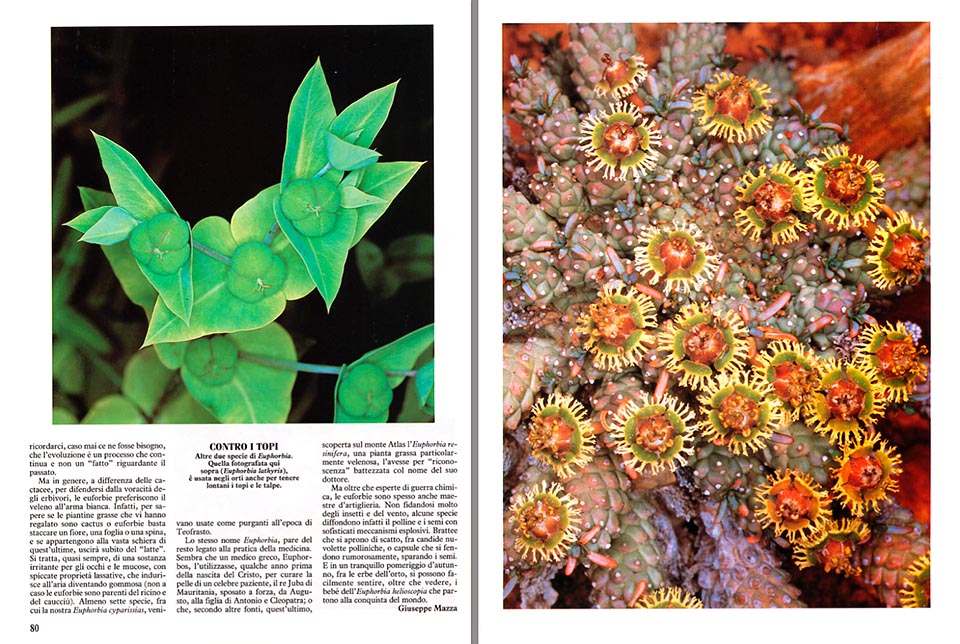 On the subject of sex, in fact, nature is, usually, conservative, and the flowers, modern reproductive structures of the Green World, evolve much more slowly than leaves and stems.

Lacking fossils, they enable us to make order between the plants, to classify them or, which is the same thing, to reconstruct their history.

Plants such as cacti, for instance, can transform the foliar laminae in thorns, reduce the trunk to an accordion full of water and adapt with more than 2.000 species to difficult environmental conditions, but then, at the time of reproduction, they “recollect” the old climates, the common origin, and display, in apparent contrast with the stalks and the biotope, sumptuous flowers, all incredibly alike. Because the flower is indifferent to the drought and to the “problems” of the plant which carries it: it worries only for the pollination, and, therefore, practically, of the wind, the birds and the insects, elements which mutate with extreme slowness.

An analogous example, even more “lively” and interesting, is given to us by the euphorbiaceae, a family definitely polymorphous, which has at least 6.000 species, belonging, for about one third, to the genus Euphorbia, the richest in the world.

The “cacti”, even 18 metres tall, of the African landscape (Euphorbia ingens, candelabrum, cooperii or triangularis), are, as a matter of fact, euphorbias, as well as the Cypress Spurge (Euphorbia cyparissias), or the Sun Spurge (Euphorbia helioscopia), of our fields. But also plants such as the Star Flowers (Euphorbia pulcherrima), or the Euphorbia fulgens of the florists, belong to the same genus.

And it is not a superficial relationship, at family level, as it could be in the world of animals the one between a lion and a cat, but a strong link, at the level of genus.

Then, why the botanists have placed all these plants together? What do they have in common, species so much different between them?

Simply, the flower; or better, the small flowers which have performed a sort of strip-tease, and now appear to be united in very characteristic inflorescences, comparable to some small “bouquets”, with “paper” around them.

Microscopic heirs, male or female, of the ancient bisexual corollas of a wicked botanic “Dynasty”, 100 millions of years ago (human history, just to make a comparison, is only 5 millions of years old), where poison, castration and nudism, are of the family.

Once eliminated the feminine organs, of which, here and there, some traces are retained, present small male flowers lost, progressively, in fact, the petals and the sepals.

These ones are still well visible in the genus Codiaeum, the very common Variegated Croton (in every family there is always the “black sheep”, which remains behind), but already in the castor-oil plant (Ricinus communis), the corolla has disappeared, and it remains a simple small bunch of stamens with some green element around them.

In the Anthostema senegalensis, the strip-tease goes on with the reductions of the stamens to one only, and in the genus Euphorbia, also the sepals fall down.

The result is the simplest flower which we can imagine: a bare stamen.

With such premises, the euphorbias would by sure not be able to attract many insects, but fortunately for them, at the same time, they began the construction of strange inflorescences which imitated the scheme of the “traditional” flowers.

They did put together the males in small homosexual groups, and placed them around a small female flower, reduced, he too, to the smallest terms.

A “queen”, which had, in her turn, castrated the masculine organs of the old corolla, and had transformed, after the usual strip-tease, in a simple peduncle, with a heavy, three lodges ovary.

And then, they surrounded the whole with showy elements, yellow or red, similar to petals, in complex structures, where the “nudists” were slowly replacing the stamens and the pistil. The illusion of a flower was perfect!

Botanists call this strange basal structure, typical of the Euphorbias, “cyathium” (from the Greek “cyathos” = “cup”), and that is the only reason for which all these plants have been put together.

“Basal structure”, because here the combinations are endless. Even if a cyathium does never contain more than one female, it can, in fact, be formed solely by males or by only one “queen”, possibly with some male cyathia. Sure! Because also these ones socialize. They join together, in small bunches and umbrellas, like in the Euphorbia fulgens and the Euphorbia milii, to create lively speckles of colour, or form even some cyathia of cyathia, and for these last ones we can repeat our remark about castration and strip-tease.

And then, to complicate the things a little more, beyond the false petals and the fake bracts, also the leaves join the game.

When the whole is not sufficiently gaudy, these ones colour up, imitating the large corollas. Candid “summer snowfalls”, for the flower-beds (Euphorbia marginata), or blazing “Star of Christmas” (Euphorbia pulcherrima), red like love, which have immediately found a warm hug in the year-ending consumerism.

Troubling structures, which have misled generations of botanists, included the great Linnaeus, convinced as he was, that the small degenerate flowers of our story, were the classical elements of a flower.

Still nowadays, talking about euphorbias, very much is still to be done from the point of view of systematics. One of the greatest authorities about, Dr. Larry Leach of the Karoo Botanic Garden of Worcester, in South Africa, engaged since more than 50 years in the botanic revision of the genus, has declared to me of not knowing, even remotely, how many are the existing species.

The old texts relate of 2.000, but every year new ones are discovered, or it emerges that some plants have been christened and christened again several times with different names.

Beyond botanical debates, it is sure that the invention of the cyathium was, for the family, the winning card. Even if showing a particular preference for Africa, the euphorbias have in fact colonized all the tropical and temperate regions of the world, adapting to our more sophisticated herbicides and to impossible conditions of life.

The Euphorbia damarana, for instance, tolerates, without damages, the 60-70 °C on the ground, of the desert of Namibia, contenting itself of the dew and of some drizzle every 2-3 years. In order not to disperse the liquids, it has suppressed the leaves and does the photosynthesis with the branches.

Similar conclusions have been drawn by the Euphorbia tirucalli, a verdant tree, quite normal at first sight, which then astonishes, at close quarters, for the skeletal nakedness of its foliage.

Many euphorbias of the arid zones lose the leaves during the dry season, some have transformed them in thorns, and others, like the already cited Euphorbia milii, are doing the same under our eyes, to remind us, should it be needed, that the evolution is a continuous process, and not, as instinctively we might think, an “event of the past”.

But, generally, unlike the cactaceae, to defend themselves from the voracity of the herbivores, the euphorbias prefer the poison to the cold steel.

Do you want to know if the succulent plants they have given you are cacti or euphorbias?

Very easy: it is sufficient to take off a flower, a leaf or a thorn, and, if they belong to the vast crowd of the last ones, some “milk” will get out at once.

It is, almost always, a poisonous substance, irritating for eyes and mucosae, with conspicuous laxative properties, which hardens at the air, becoming gummy (it is not a chance that the euphorbias are relatives with the castor-oil plant and the caoutchouc).

At least seven species, between which our Euphorbia cyparissias, were already used as cathartic at the time of Theophrastus, and, in the Middle Age, their mysterious “white blood”, was the most important ingredient of many magic potions.

The name Euphorbia itself, seems, however, connected with the practice of the medicine. It seems that a Greek physician, Euphorbos, utilized it, a few years before the birth of Christ, to treat the skin of a celebrated patient, Juba, king of Mauretania, who had been forced by Augustus to marry the daughter of Antony and Cleopatra; or that, after other sources, this last, having discovered, on the Mount Atlas, the Euphorbia resinifera, a succulent plant particularly poisonous, had, for gratitude (by chance?), christened same with the name of his doctor.

But, besides being experts of chemical war, the euphorbias are often also masters of artillery. Not relying too much on the insects and the wind, some species propagate, in fact, the pollen and the seeds with sophisticated explosive mechanisms.

Bracts which open suddenly, between candid polliniferous small clouds, or capsules which split noisily, shooting seeds. And during a quiet autumn afternoon, between the herbs of the orchard, we can easily hear, as well as see, the babies of the Euphorbia helioscopia leaving for conquering the world.

Euphorbia: the “Christmas star” … but also cactaceous look was last modified: May 23rd, 2019 by Giuseppe Mazza