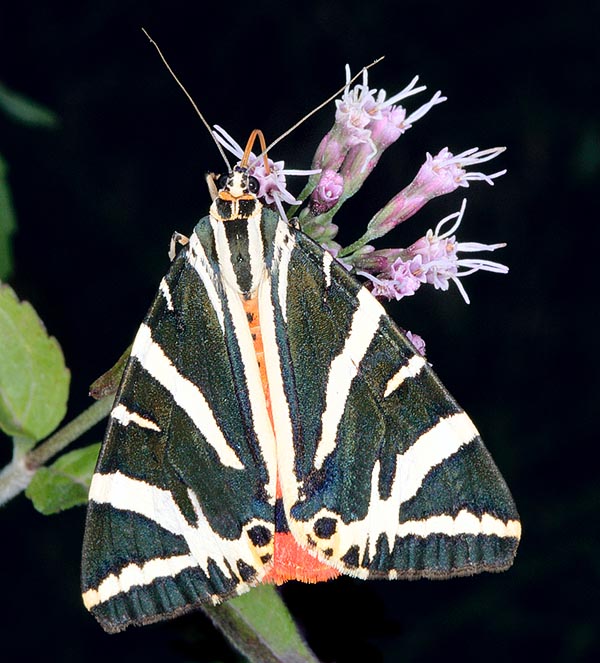 The well known Jersey tiger (Euplagia quadripunctaria Poda von Neuhaus, 1761) belongs to the order of the Lepidoptera and to the family of the Arctiidae , a group of moths including the most beautiful and coloured butterflies of the nocturnal world.

Many species belonging to this family, though heterocera, fly indifferently also during the day rightly rendering them much visible due to the magnificent colours they have on the back wings.

It is a very common butterfly and it is easy to meet it during the second half of summer along the humid paths in the woods of broad-leaved trees, on the banks of water streams and also in rocky recesses, often in great number as it results being a very social species.

It loves sucking the nectar of various essences with a spasmodic preference for the Hemp agrimony (Eupatorium cannabinum) a habit that sees often, when this essence is present, gathering on their inflorescences practically all the specimens living in the nearby area.

It rapidly flies away when it is inadvertently approached and from almost invisible when perching among the vegetation, it suddenly becomes a quite surprising sight, showing a bright red flash that, with the same rapidity with which has appeared, suddenly disappears as soon as perched again. It flies also during the night and is easily attracted by the artificial light.

Its flight is rapid and nervous with sudden changes of direction and very fast stops such to render very difficult the detection of the repositioning place.

Its social behaviour has led it to become one of the most known butterflies in the western world. In Europe are known many places of gathering of this species and often these sites have become, time passing, object of frequented touristic tours. Among all stands the famous Valley of the Butterflies in Rhodes between the villages of Kremasti and Paradissi in a place called Petaloudes (rightly, butterfly in Greek) where the small river Pelecano has formed a dense vegetation of Platanus orientalis, Liquidambar orientalis, Styrax benzoin whose exudate, the resin of styrax of benzoin, seems to attract during the summer tens of thousands of these moths. 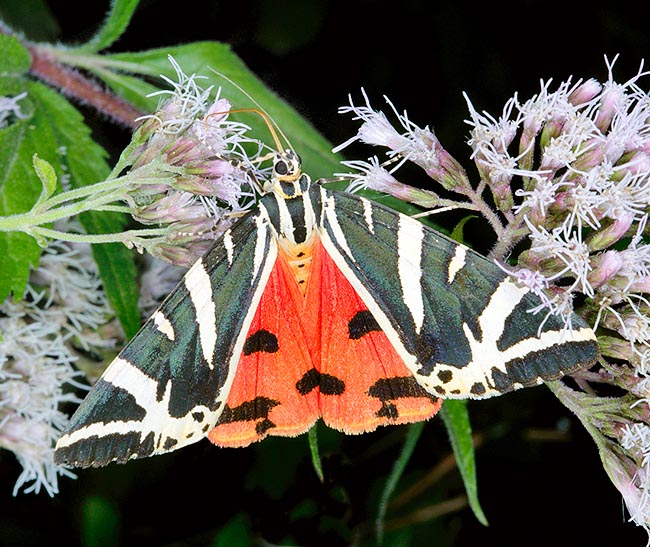 But when flying is shows the lower red wings, confusing the importunate © Giuseppe Mazza

The etymology of the scientific name exemplifies the morphological characte- ristics of this moth. Euplagia from the fusion of the Greek term “Eu” = beautiful and “plagia”, from the Greek “plagios” = oblique, right to indicate the nice transversal striation drawn on the fore wings; quadripunctaria comes from “quadri” = four and “punctum” = spot, with reference to the big black points blotting the red of the rear wings.

Quite particular and folkloric are the common names given in the various European languages. Jersey tiger in English; Russische Bär or Spanische Flagge in German, Spaanse Vlag in Dutch; Ecaille chinée or Callimorphe in French.

The Jersey tiger is amply distributed in all Europe. Northwards, it reaches the Scandinavian Peninsula and, from Estonia, all the continental Russian part up to the Urals and then reaches the Caspian Sea and Iran. Southwards, the European coasts of the Mediterranean basin and the Middle East.

It is not present in Sardinia and is rather localized in southern England and on the Jersey Island, hence the English common name. It appears to be subject also to migrations towards the north during the late summer period.

It lives from the sea level up to 1500 metres in the Alpine valleys. It is a species loving the cool and humid areas with a lot of vegetation and vast shaded zones. It is highly endangered in some zones due to the gradual disappearance of its natural habitat. It is a protected species in many European nations. 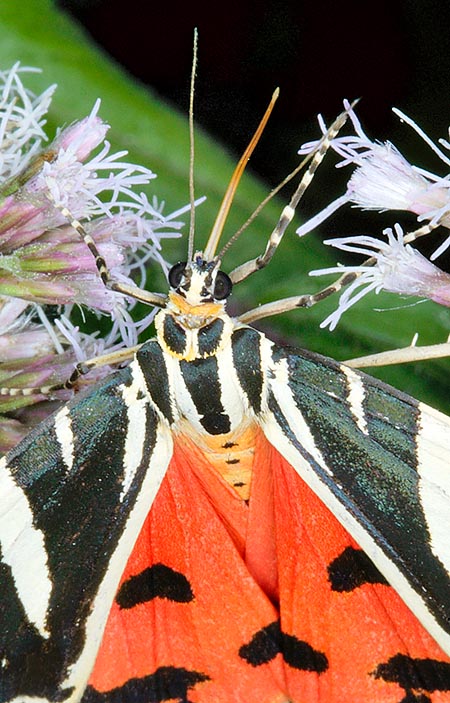 The Euplagia quadripunctaria is a good-sized moth reaching a wingspan of more than 65 mm.

The fore wings are blackish/bluish with large white oblique lines that camouflage its look when resting.

The rear wings, on the contrary, are bright red marked by four big black spots and by a short belt, always black, interesting the side of the sub/post-marginal area. The red colour fades remarkably with the time turning soon reddish orange.

Like all moths, the body is stocky and pubescent of yellowish colour, crossed on the whole length by a line of small black dots. When resting, this butterfly keeps the wings roof folded, thus hiding the rear wings and facilitating remarkably the mimicry.

The robust legs are easily used for moving on the ground when is there feeding and often also when on the ground for hiding or for escaping dangers. It has very long and filiform antennae that differentiate it immediately from the diurnal butterflies, as states the scientific denomination of the suborder Heterocera, from the Greek “heteros” = different and “keras” = antennae.

Despite being a moth, it has diurnal flight and life though keeping vitality during the nocturnal hours.

It is a monovoltine moth and flies June to September in only one generation.

Polyphagous, it nourishes of various essences and in particular of the species belonging to the genera Urtica, Taraxacum, Glechoma, Senecio and Plantago, but with a certain preference for the Boraginaceae, such as the Echium and the Lithospermum, and, of course, the Eupatorium cannabinum.

The eggs are laid in late summer on the host plants and the hibernation occurs at the stage of small larva which hides among the shrubs of hazelnut, of raspberry and of blackberry which often become their food after the hibernation. The big caterpillar is blackish and crossed for the whole length, by a well visible yellow stripe. All the body is amply scattered of spiny white rosettes. The passage to chrysalis happens on the ground in a cocoon formed by vegetal debris mixed with land.