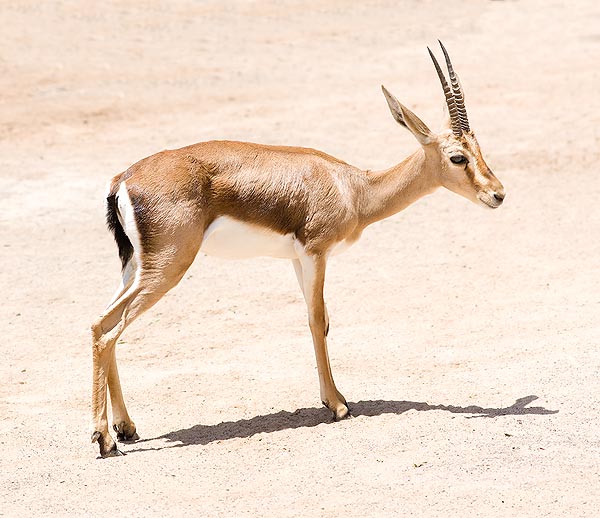 Cuvier’s gazelle or Atlas gazelle (Gazella cuvieri Ogilby, 1841, family Bovidae), which gets the scientific name from its discoverer, the Baron G.L. Cuvier (1769-1832), has a distribution area limited to the mountain area of the Atlas and of the Anti-Atlas, as well as on the hills of Bani, in the northern and western extreme of the African continent.

We are therefore talking of Morocco, Tunisia and Algeria, where it may be found also at high altitude and in zones where it may snow. The local name “Edmi” or “Idmi” is, odd thing, utilized also in Arabia and in the Middle East (Israel, etc.) for designating another mountain gazelle, the Gazella gazella.

The Gazella cuvieri is an artiodactyle (Artiodactyla) with elegant forms, 65 to 70 cm tall at the shoulder, with weights varying from 20 to 30 kg.

The coat is reddish or fawn, but is often tending to the grey, is rather dark and with thick hair, shaggy and fairly long. A black or dark band on the side is present, from the junction of the fore limb to that of the hind one, band which widens on the back and separates the dark colour of the mantle covering the sides and back from the white of the ventral zone. 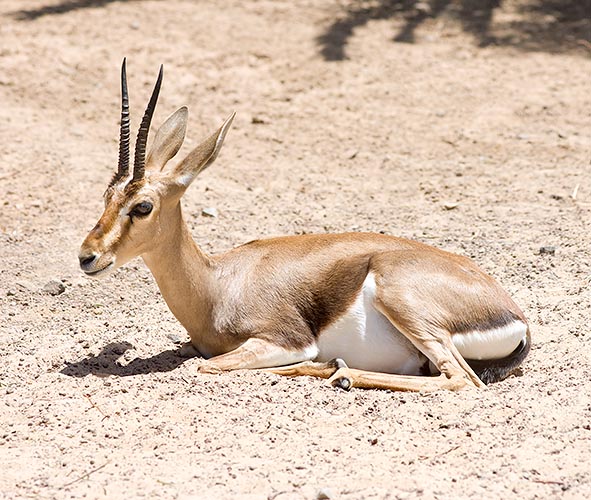 At the level of the articulations of the legs are often evident tufts of longer hair.

Both sexes have horns, much thick at the base and strongly ringed, which raise straight and almost parallel, but describing, especially close to the terminal portion, a slight curve bent forward and out.

The average length of the horns is of about 25 centimetres, but, male individuals, in good health and rather aged (the lifespan is of about 12 years), may reach well greater measures. The record of length, officially registered, is of 37,7 cm. The females carry more modest horns, thinner and practically straight.

It is an antelope usually living in pairs of in family groups. The births take place in April-May, after a quite long gestation (six months) and usually one only fawn is delivered, even if twins are not rare.

The alimentation is mixed and this gazelle may easily switch from the “grazing”, eating the grasses of the mountain prairies, to the “browsing”, tearing off leaves, berries, buds of the branches of plants and shrubs. 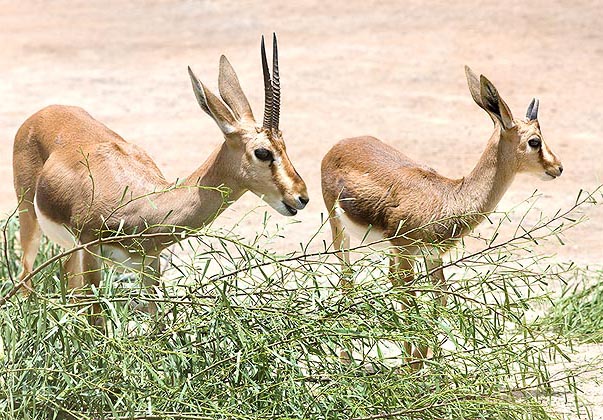 A Gazella cuvieri with young. They live in pairs or in small family groups © Giuseppe Mazza

When the opportunity arises, it willingly goes, for drinking, to sources, streams or simple puddles.
But it can do without water, getting the necessary liquids from the dew and from the vegetables it eats.

Extremely agile, is at ease also on rugged terrains, so much that we might consider it, like the Klipspringer (Oreotragus oreotragus), a sort of “chamois” of North Africa.

Even if it may be found on the tops, well over the 2.000 metres of altitude, the choice habitat is formed by zones of quite thick vegetation or even of forest, especially in the small valleys between adjacent ridges.