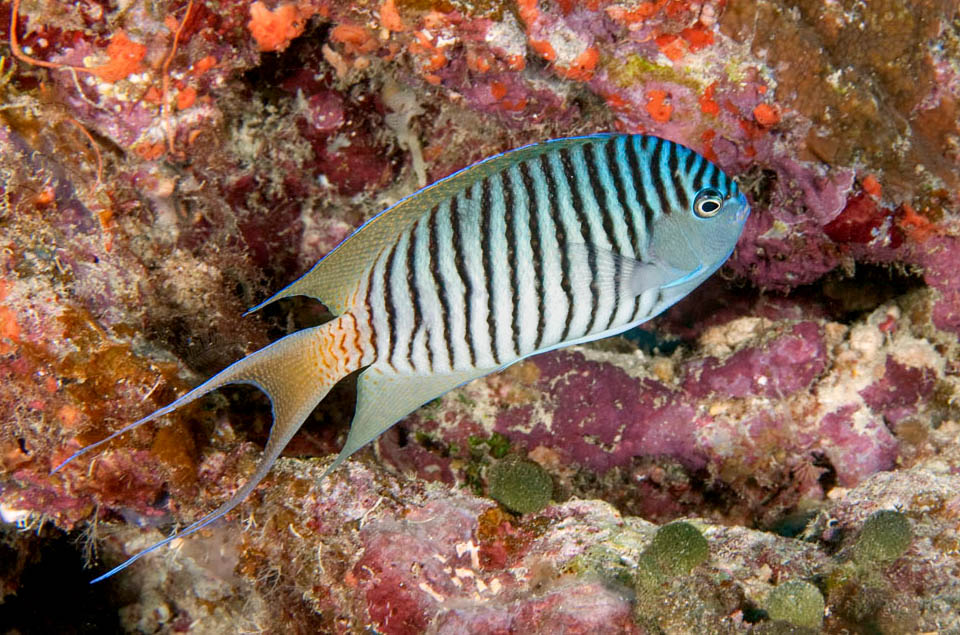 Genicanthus melanospilos male. It lives in the tropical waters of western Pacific and Indian Ocean nearby zones © Paddy Ryan

Genicanthus melanospilos (Bleeker 1857), commonly known as Swallowtail angelfish or Spotbreast angelfish, belongs to the class of the Actinopterygii, the ray-finned fishes, to the order Perciformes and to the family of Pomacanthidae, counting 8 genera and about 90 species, often present in the aquaria with their multicoloured liveries.

Very compressed laterally fishes and with a characteristic spine at the base of the operculum, present also in the genus Genicanthus that counts about a ten species and comes from the old Greek “γένυς” (genys) = cheek and “ἄκανθα” (akantha) = spine, with reference, rightly, to this peculiarity.

The specific name melanospilos comes, always in ancient Greek, from “μέλαν” (mélan) = black and “σπιλος” (spilos) = spot, to remind the showy black spot that, apart from the lateral bands, the males have ventrally just before the pelvic fins.

The Swallowtail angelfish has a vast diffusion in the western Pacific Ocean, crossing into the neighbouring areas of the Indian Ocean. Indicatively, starting from Indonesia, it reaches, northwards, China and Japan, southwards, after Australia, New Caledonia. Eastwards, after Papua New Guinea, we find it in Micronesia, the Solomon Islands, Vanuatu and in the Fiji Islands. Recently, it has been found also in Tonga waters. 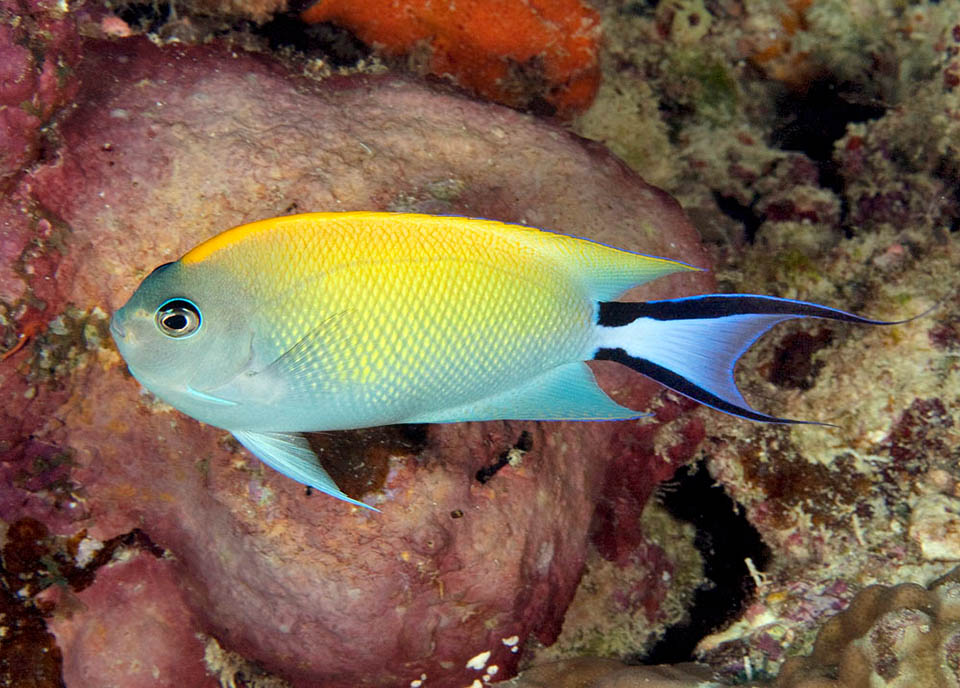 A female. Apart from the caudal fin elongated in the sides like a swallow tail, as the vulgar name states, the livery is completely different © Paddy Ryan

It is a sedentary species, present between 20 and 45 m of depth, strictly linked to the madreporic formations. It loves the external steep slopes of the reefs, rich of protrusions and of grottoes where to hide, but it can be found also on the sandy seabeds, close to coralligenous remains, and usually, looking for food in sites where the currents abound of zooplankton.

The males can reach the length of 18 cm. The females are smaller, but can, growing, become males. In fact, as for instance occurs for Genicanthus lamarck and Genicanthus personatus, this is a sequential protogynous hermaphrodite species. In fact, upon birth, the young have both sexes, but the first to manifest is the female one. Then, with age, the females may transform into males and can have a small harem. Usually, they are small groups of 3-7 individuals. When the leader dies, the biggest female turns male and takes its place. 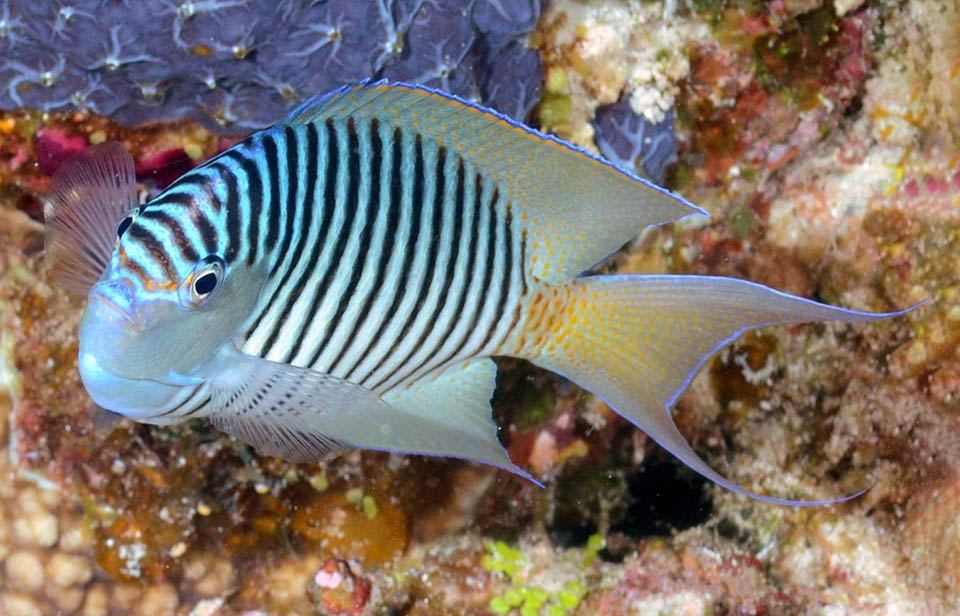 It is a sequential protogynous hermaphrodite species. All young are females but growing they can turn into males © Graham Edgar, Reef Life Survey

In females the upper part of the body tends to yellow with scales more and more bordered, towards the belly, with the bluish grey that covers the remaining parts of the body. The “swallow tail” of the caudal fin is more emphasized by the bluish strips on the sides, edged with blue.

Liveries that can be found also, roughly, also including the black spot of the males, in a similar species, the Genicanthus caudovittatus, centered however in the Indian Ocean.

The Swallowtail angelfish nourishes of zooplankton that often catches, without moving too much, in the water column over the den. When a female is ready for spawning, the fecundation takes place swimming, and the eggs are entrusted to the currents.

The resilience of the species is good (2021), with a possible doubling of the populations in 1,4-4,4 years and, considering the vast diffusion, the vulnerability index is modest, presently marking 33 on a scale of 100.