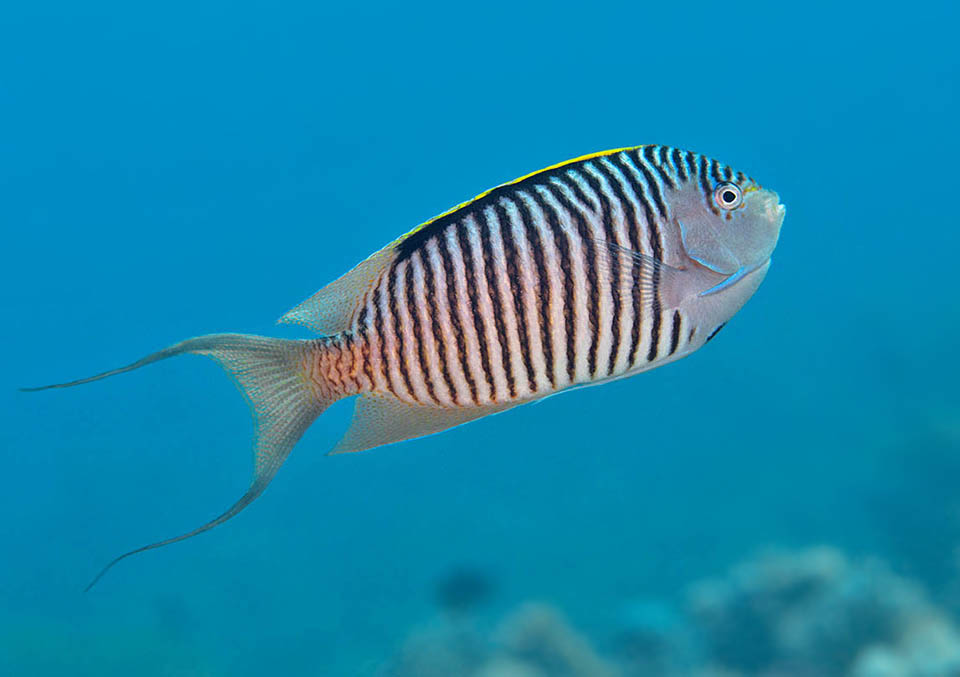 Genicanthus caudovittatus male. Commonly known as Zebra angelfish, it is present in the Red Sea and in various Indian Ocean locations © Rafi Amar

Genicanthus caudovittatus (Günther 1860), commonly known as Zebra angelfish, belongs to the class of the Actinopterygii, the ray-finned fishes, to the order Perciformes and to the colourful family of Pomacanthidae, counting 8 genera and about 90 species.

All of them are very compressed laterally fishes with a characteristic spine at the base of the operculum, present also in Genicanthus, genus coming from the ancient Greek “γένυς” (genys) = cheek and “ἄκανθα” (akantha) = spine, rightly referring to this peculiarity.

The specific name caudovittatus comes, in Latin, from “cauda” = tail and “vittatus” = adorned with ribbons, alluding to the black bands present on the lobes of the females’ caudal fin.

The Zebra angelfish has a very vast diffusion in the tropical waters of the Indian Ocean.

Indicatively, after the Red Sea, we find it along the African coast from Kenya to South Africa, including Madagascar and the adjacent islands of the Comoros, Réunion and Mauritius. It is frequent in the Maldives and then reaches, eastwards, the Indonesian waters that mark its liit with the Pacific Ocean. 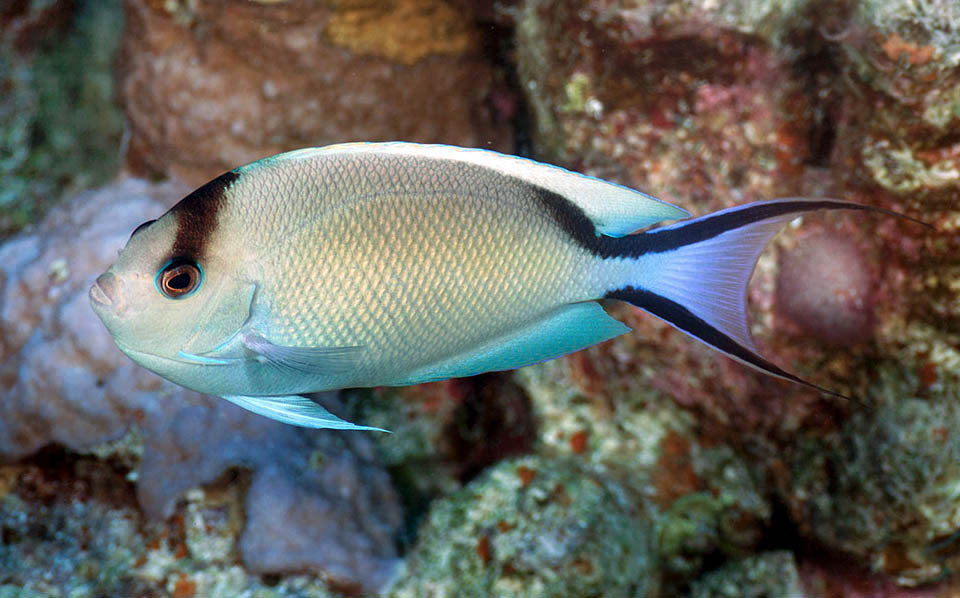 It is a non-migratory species linked to the madreporic formations, present between 2 and 70 m of depth. It loves the steep external slopes of the reefs, where the currents carry the zooplankton, it nourishes of and where abound the openings where to quickly hide in order to disappear from the eyes of the predators.

The males reach a length of 20 cm. The females are smaller, but can, growing, transform into males. In fact, this is, as is the case for Genicanthus lamarck, Genicanthus personatus or the analogous Genicanthus melanospilos, a protogynous hermaphrodite species. At birth, the young already have both sexes, but the first to develop is the female one.

The males can be mistaken with those of Genicanthus melanospilos, who, however, live in the Pacific crossing the border only in the adjacent zones of the Indian Ocean. Both have a zebra design with parallel vertical lines and a black spot on the chest just before the pelvic fins, but in Genicanthus caudovittatus the dorsal fin displays a large black band edged with yellow orange towards the head. 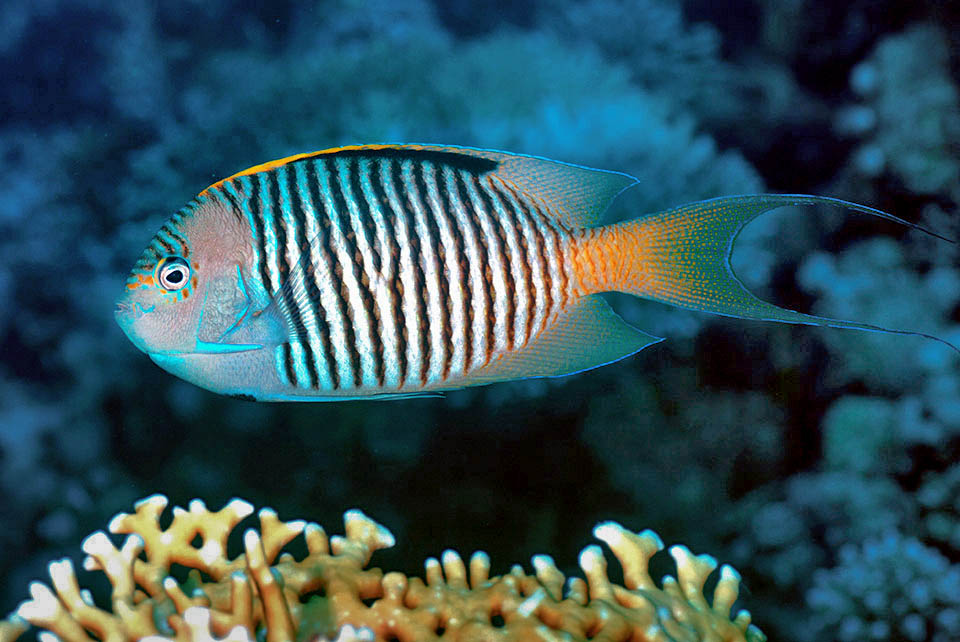 Males resemble much to those of Genicanthus melanospilos, but here the dorsal fin has a wide black band gaudily edged of yellow orange towards the head © Paddy Ryan

Conversely, the females that display in both species a strong sexual dimorphism, cannot be mistaken as in Genicanthus caudovittatus the upper part of the body is not yellow but beige and there is a characteristic dark brown “saddle-like mask”, going from one eye to the other passing on the back. Both have the black band on the lobes of the caudal fin, but in Zebra angelfish the upper one continues also on the final part of the back.

Genicanthus caudovittatus nourishes of zooplankton. The males move surrounded by a small harem and when a female is ready to spawn the fecundation takes place while swimming. The eggs, then, are entrusted to the currents.

A recent study performed in the Gulf of Aqaba has evidenced that the young do not grow up in shallow waters, as usually occurs for the fishes of the reef, but at 60-65 m of depth, whilst the adults are averagely present by the 30 m.

The researchers have noted that when the young arrive in mass, at that depth are present few predators, but they have not been able to discover what prevents the other species from doing the same.

The resilience of Zebra angelfish is good (2021), with a possible doubling of the populations in 1,4-4,4 years, and the vulnerability index is nowadays modest, marking 34 on a scale of 100.