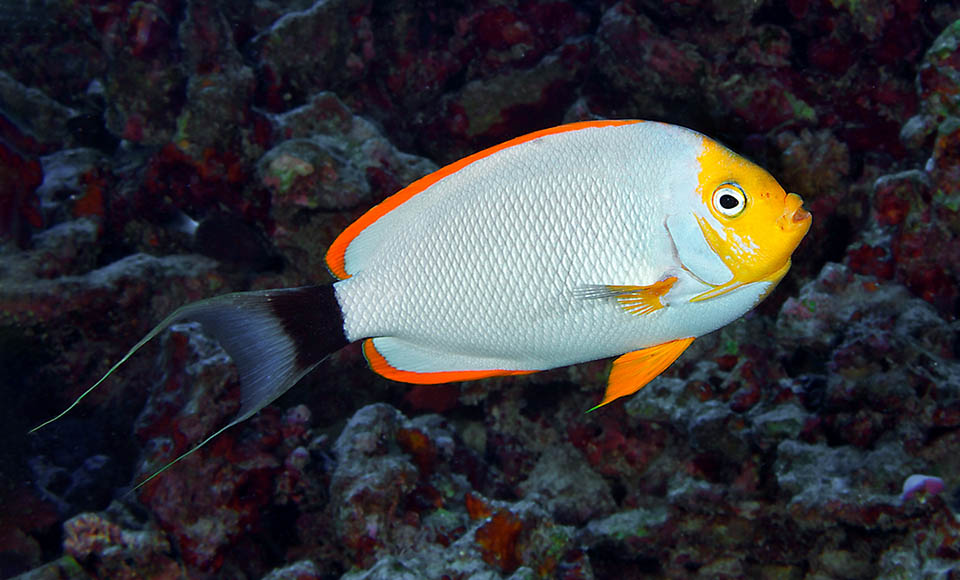 The Masked angelfish (Genicanthus personatus Randall 1975) has been discovered only in 1970. It was a female and was used for the first description of the species by John Randall in 1975, then amended, after the finding, in the same year, of a male.

Genicanthus personatus belongs to the class of the Actinopterygii, the ray-finned fishes, to the order of the Perciformes, and to the fanciful family of the Pomacanthidae, the so-called angel fishes, often present in the aquaria with their brilliant liveries.

Species that may exceed the 40 cm, such as Pomacanthus maculosus, Pomacanthus annularis, Pomacanthus imperator or Pomacanthus paru, suitable only for the large public aquaria, but also smaller, at times measuring just a few centimetres, such as Centropyge loricula and Centropyge bispinosa, reproduced in captivity for the home aquaria with several variations of colour.

They are all tropical fishes, very compressed laterally, united in a family counting presently 8 genera and about 90 species. 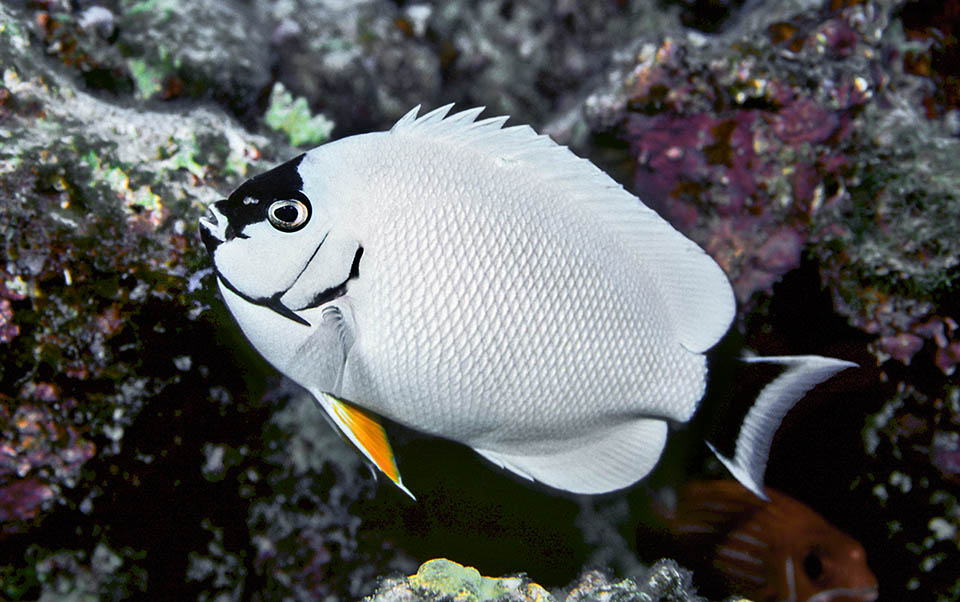 A female was found first, and in 1975 the species got the name from the characteristic black mask on eyes. Later, on the same year, a male was discovered © Keoki Stender

The genus Genicanthus comes from the ancient Greek “γένυς” (genys) = cheek, and “ἄκανθα” (akantha) = spine, with reference to the big spine all these fishes do have at the base of the operculum. Conversely, the specific name personatus comes from the Latin and means “masked”, with reference to the black mask that the females have on the eyes, a term that has remained, even of later it has been discovered that the face of the males is of orange yellow colour.

The Masked angelfish is essentially endemic to the Hawaii Islands, but recently it has been found, towards north-west, in the Midway Atoll, about 1700 km far away.

It is a benthopelagic species, sighted between 20 and 174 m of depth, generally among rocks and corals, but also on sandy bottoms. 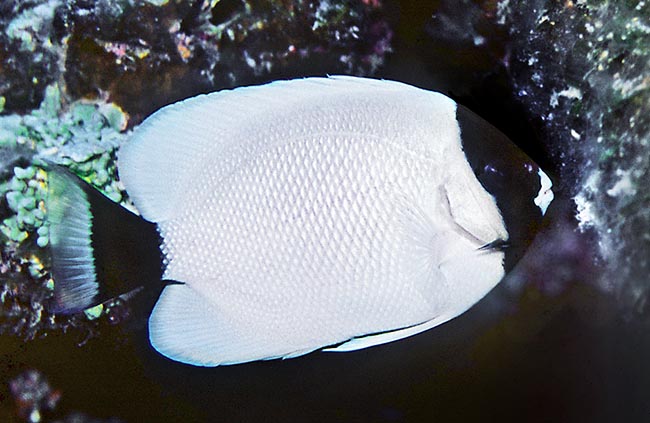 In the juveniles, similar to females but with white pelvic fins, the black facial mask is much more extended and covers almost all head but the mouth. Then, growing, the caudal fin gradually turns dark black © Keoki Stender

The males can reach 21 cm of length and are bigger than the females who form, finally, a moment of their growth.

In fact, it is, as often occurs for the angelfishes, a sequential protogynous hermaphrodite species. In the young individuals are present in fact both gametes, but the first to develop are the female ones followed later by the male.

In other words, all Genicanthus personatus come to life females and with age, when they reach 15-18 cm of length, they can transform into males.

The body, laterally compressed, tends to oval, but the whole profile gets rather squared when the fins are stretched out. The mouth is small, with tiny setiform teeth arranged bristly on more rows.

In both sexes the prevailing colour of the livery is an astonishing bright pearly white, different from that of the other fishes, emphasized by the dark border of the scales.

The females have the aforementioned frontal black mask, that surrounds the eyes and the lips, continuing towards the operculum, where it stands out, also black, the great defensive spine characteristic of the angelfishes. Also the front half of the caudal fin is black whilst the pelvic fins display orange shades. 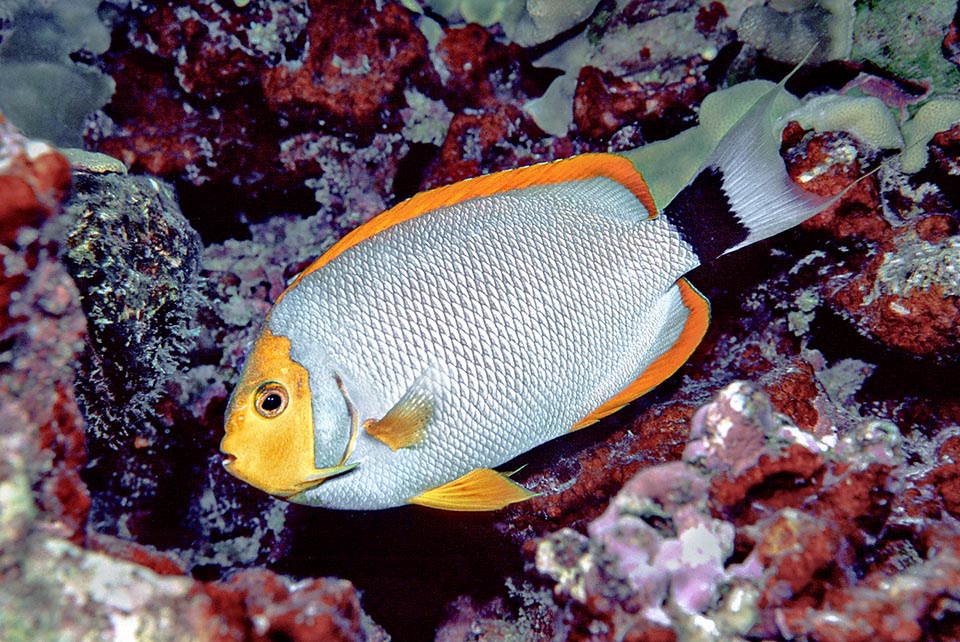 The young are quite similar to the females, but the pelvic fins are white, and the black facial mask is much more extended, covering initially the whole head but the mouth. Then, growing, the caudal fin gradually turns black.

Genicanthus personatus eats zooplankton, eggs or fishes and benthic algae. Its life in the group is unknown but can be guessed. The social organizations of the Pomacanthidae foresee monogamy, harem, promiscuity and lekking with more males who show off in order to be chosen in a collective courting. Perhaps, like in Genicanthus lamarck, the Masked angelfish lives in small harems formed by one male and few females, and, as usual, when this die, the biggest female takes its place by changing sex.

Since the couples are sold for 30.000 USD, they have been able to reproduce them in captivity, but feeding has not been easy, like, after all, at the beginning, that of the adults taken away from the sea. The vulnerability index of the species (2021), calculated on the food availability, is considered as moderate and marks presently 35 on a scale of 100.

Genicanthus personatus was last modified: May 6th, 2021 by Peppino