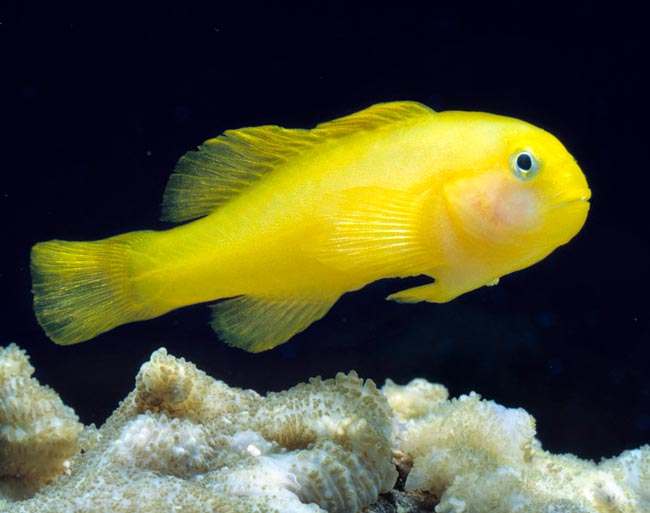 The cocky Okinawa goby or Yellow-coral goby (Gobiodon okinawae Sawada, Arai & Abe, 1972) is une of the smallest fish in the world.

Taxonomically it belongs to the class of Actinopterygii, the ray-finned fishes, to the order of Perciformes and to the endless family of Gobiidae, mainly present in the tropical and temperate seas, but also in the fresh and brackish waters, with about 250 genera and 2000 species.

The name of the genus comes from the Greek “gobius”, name the Romans gave to the gobies, and from “odus” = tooth, due to the showy teeth in respect to the size.

The name of the species “okinawae” = in Latin, “of Okinawa”, refers to an island of the Ryukyu Archipelago, south of Japan, where the individual with which the authors described the species was taken.

It lives in the Western Pacific tropical waters. Indicatively, we find it, starting from the Cocos Island, in Australia, Indonesia, New Guinea, Solomon Islands, Palau, Philippines, Taiwan and, as we have said before, in the southern part of Japan. Eastward, it reaches the Marshall Islands and southward the Great Barrier Reef. 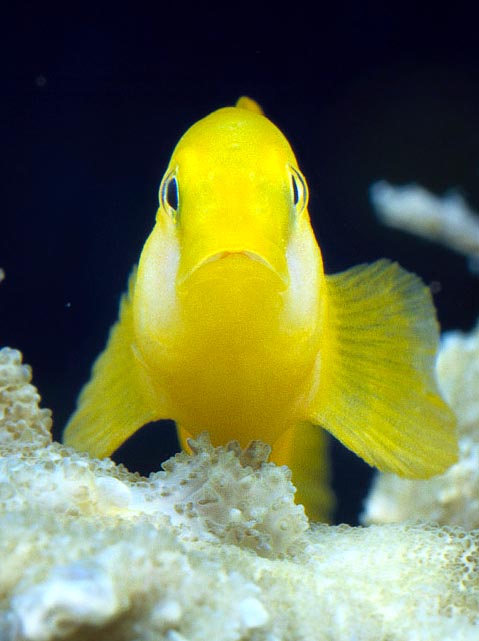 It lives in the madreporic formations, in shallow waters, up to 15 m of depth. Like the Broad-barred goby Gobiodon histrio it loves settling among the coral branches of the genus Acropora and is protected by poisonous mucus, sour to the taste of the predators.

The livery, darker in the males, is yellow with pale cheeks, at times slightly pink and this distinguishes it from the Gobiodon citrinus, quite similar, but with small bluish stripes.

The Okinawa goby is not a hunter but an opportunist. It waits by his house entrance for the food to pass in front and then swallows the prey. Ostracods, chaetognaths, pteropods and larvae of tunicates are usually its main dish. Like the broad-barred goby, it is hermaphrodite: the sex defines with the age and may change in the two directions depending on the circumstances. If, for instance, we put two females in a small aquarium, the biggest will become male, and if we have two males the smallest will transform into a female.

In the wild, after having well cleaned with the spouse the branch of madrepore chosen as nest, the female decorates it on every side with even a thousand of eggs, immediately fecundated by the male who will watch them for 5 days, until the hatching. The larvae metamorphize after about one month of planktonic life and when 40 days old begin to colour in yellow with a life expectancy of 2-3 years.

Like the broad-barred goby, the Okinawa goby does not have foes and its vulnerability index is very low, of 10 over 100, with populations which can double in less than 15 months.