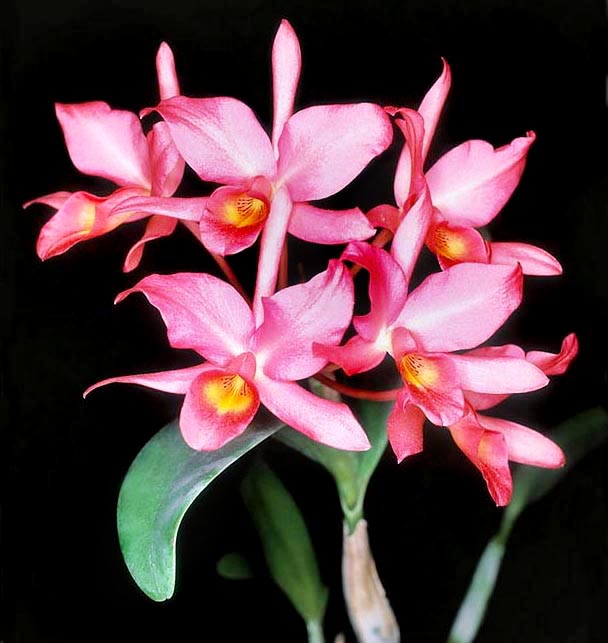 It is a natural hybrid (Guarianthe aurantiaca x Guarianthe skinneri), native to south-eastern Mexico and Central America (El Salvador, Guatemala, Honduras and Nicaragua), where it grows, epiphytic, on the highest branches of the trees in the semi-deciduous tropical forests, between the 700 and the 1400 m of altitude.

The name of the genus is the combination of “guaria”, term under which in Costa Rica are called the orchids and “anthos” = flower; the name of the hybrid “guatemalensis” = of Guatemala, refers to one of its places of origin.

The pseudobulbs are 12-35 cm long with at the apex two elliptic leaves, up to 18 cm long and 5 cm broad.

The terminal inflorescence, 10-15 cm long, is initially enclosed in a spathe, which dries up during the resting period before its development and which has the task to protect it during the initial phase, carrying numerous flowers, of 6-10 cm of diameter, which may be of different colours, white, pink, orange, purple or red, with, usually, a more intensely coloured labellum, and slightly perfumed.

It reproduces by meristem in vitro and, amateurishly, by division, with each section equipped with 3-4 pseudobulbs with at least one dormant gem at the base. Vigorous and floriferous orchid, it requires high luminosity, also slightly filtered sun, with frequent waterings during the vegetative period, high ambient humidity, 80-85%, and medium-high temperatures, as it can bear values to a little over the 35 °C; it requires a resting period, in winter, with almost suspended waterings, cool temperatures, around the 12-14 °C; and humidity around the 70%, till the appearance of the new roots.

A good air movement is fundamental in every season. It is cultivable in pot or in basket with large bark fragments or mounted on a raft or on pieces of bark; the circulation of the air at the level of the roots is important, as they must be able to dry up completely being quite sensitive to rottenness due to water stagnation.

For the waterings and the nebulisations, are to be utilized rain water, water obtained by reverse osmosis or demineralised; the fertilizations, duly distributed in way to eliminate salts accumulations, are to be done during the vegetative period, preferably with balanced hydrosoluble products, with microelements, at half dosage, or less, than what suggested on the package. Division, repotting and mounting on branch or bark are to be done by the appearance of the new roots.

The natural hybrid is inscribed into the appendix II of the CITES (species whose trade is internationally ruled).