The species is native to Bolivia, Colombia, Ecuador and Peru where it grows at the margins of the humid forests and along the banks of the water streams at low altitudes.

The name of the genus comes from the Latin “Heliconius, a, um” = of the Helicon, mountain sacred to Apollo and to the Muses in the Greek mythology; the name of the species is the Latin adjective “rostratus, a, um” = equipped with rostrum, with the reference to the parrot beak-shaped (rostrum) bracts.

The inflorescence, on a robust peduncle, is a 30-80 cm long drooping terminal spike with markedly waved red rachis and 10-40 alternate bracts with the concavity looking downwards, distichous, imbricate, coriaceous, pointed, reminding due to their shape the beak of a parrot, of bright red colour with cream or yellow apex and green margins, 6-15 cm long.

The bracts enclose up to 18 tubular, 3,5-4,5 cm long flowers, white at the base pale yellow at the apex, rich of nectar.

The flowers, with bilateral symmetry, are hermaphroditic, with 3 sepals, two of which merged and one free, and three petals fused together, little differentiated between them, 5 fertile stamina and one staminode opposite to the free sepal; the flowers are pollinated by the humming birds. The fruits are globose drupes initially green, then glossy dark blue when ripe, containing 1-3 seeds.

It reproduces by seed, previously scarified and kept in water for 4 days to soften the tegument, in organic loam with addition of siliceous sand or agri-perlite for a 30%, maintained humid at the temperature of 26-28 °C, with times of germination variable from one to six months or more, and first flowering after 3-4 years, but usually and easily by division of the rhizomes in spring, with each section provided with several vegetative buds. 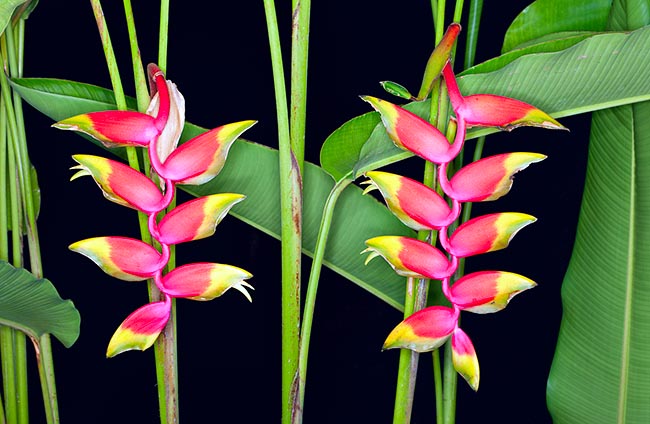 It is one of the most ornamental and cultivated species of Heliconia due to the lively coloured inflorescences, lasting long on the plant, of which several varieties have been selected, among which some of contained size, cultivable in the humid tropical and subtropical climate regions in full sun or slight shade. It requires soils rich of organic substance, acidic or neutral, well draining, maintained almost constantly humid, but without stagnations and a position sheltered from the winds.

Successfully cultivable also in pot, in particular the varieties with reduced form, to be sheltered in greenhouses, verandas or luminous winter gardens, where the climate conditions do not allow its permanence in open air during the coldest months, utilizing an organic substratum with addition of siliceous sand or perlite for a 30% to improve the drainage, with high ambient humidity, winter day temperatures of 20-24 °C and lowest night ones not under the 15 °C, lower temperatures would slow down the vegetation and may hinder the blooming. The watering must be regular and abundant in summer, avoiding the stagnations, cause of easy rottenness, more spaced in winter, letting the substratum to partially dry up before giving water again, with fertilizations done preferably with slow-release balanced products with addition of microelements.

It is easily subject to mites and bug meals attacks, to be treated, in case of serious infestation, with specific products. The cut inflorescences, of great ornamental effect and long lasting, about 2 weeks, are often utilized in the floral compositions.