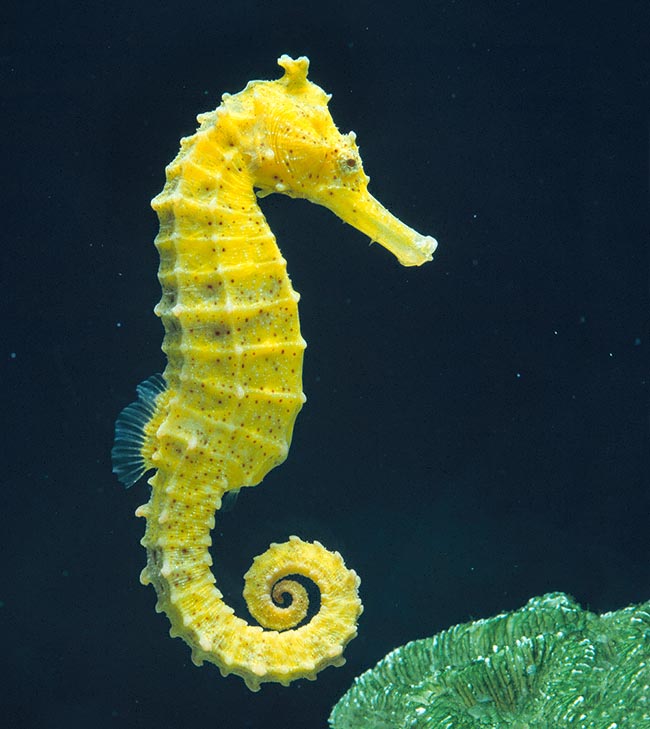 Hippocampus kuda has a very vast range in the tropical Indo-Pacific, from African coast to Hawaii Islands © Giuseppe Mazza

The Spotted seahorse (Hippocampus kuda Bleeker, 1852), commonly known also as Yellow seahorse, belongs to the class of Actinopterygii, the ray-finned fishes, to the imaginative order of Syngnathiformes and to the family of Syngnathidae, the one grouping the pipefishes and the seahorse, with 58 genera and at least 307 species accepted in 2022.

Considering also only the variability of Hippocampus kuda, some in fact hypothesize that this species could group even about ten of them to discover with molecular biology.

Nothing more likely, seen the vast distribution area and its presence in different environments, with a marked predilection in some places for the brackish waters, so much that it is called also, and not wrongly, Estuary seahorse.

The genus Hippocampus originates from the old Greek “ἵππος” (hippós), horse, and “κλίσις” (kampé), curvature, with allusion to the head having an equine look, bent of 90) in respect to the body, that ends with that cylindrical snout, born from the merged jaws, typical to al the Syngnathiformes, apart the adults of the genus Bulbonaricus who lose it during their development.

The specific term kuda, meaning horse in Malay language, reinforces this mythical aspect it has.

Hippocampus kuda has a very vast distribution in the tropical Indo-Pacific.

Indicatively, starting from the Persian Gulf, where it is very frequent, we find it along the African coasts, in Madagascar, in Mauritius, the Maldives, in India and Sri Lanka, in the Andaman Islands, in Thailand, Malaysia, Singapore, Indonesia, Timor-Leste, Papua New Guinea, Palau and northwards in Philippines, Hong Kong, Taiwan, China, Korea and Japan. 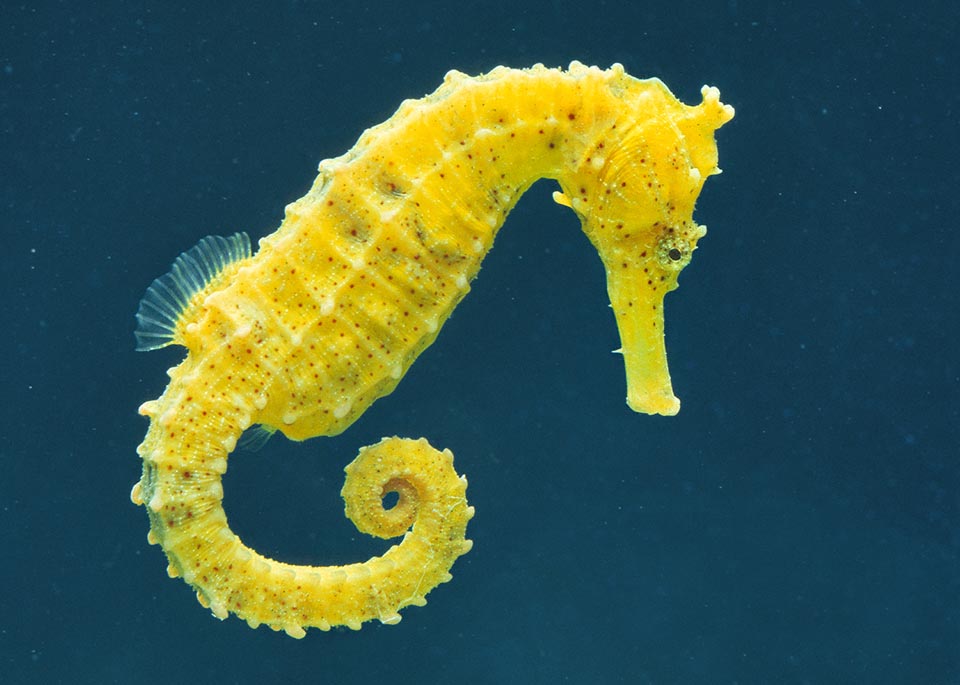 Known as Spotted seahorse, Yellow seahorse or Estuary seahorse it might group even about ten species to define with the DNA © Giuseppe Mazza

Southwards, after Australia, it reaches New Caledonia, whilst eastwards is present in Micronesia, in the Solomon Islands, in Fiji, Samoa, Tonga, Tahiti, French Polynesia and Hawaii Island.

The Spotted seahorse is a sedentary fish, and, anyway, unless a hurricane carries it far away stuck to floating weeds, could not be otherwise because it is a very bad swimmer. In fact, it has been found among the sargassoes going adrift offshore at 20 km from the coast. 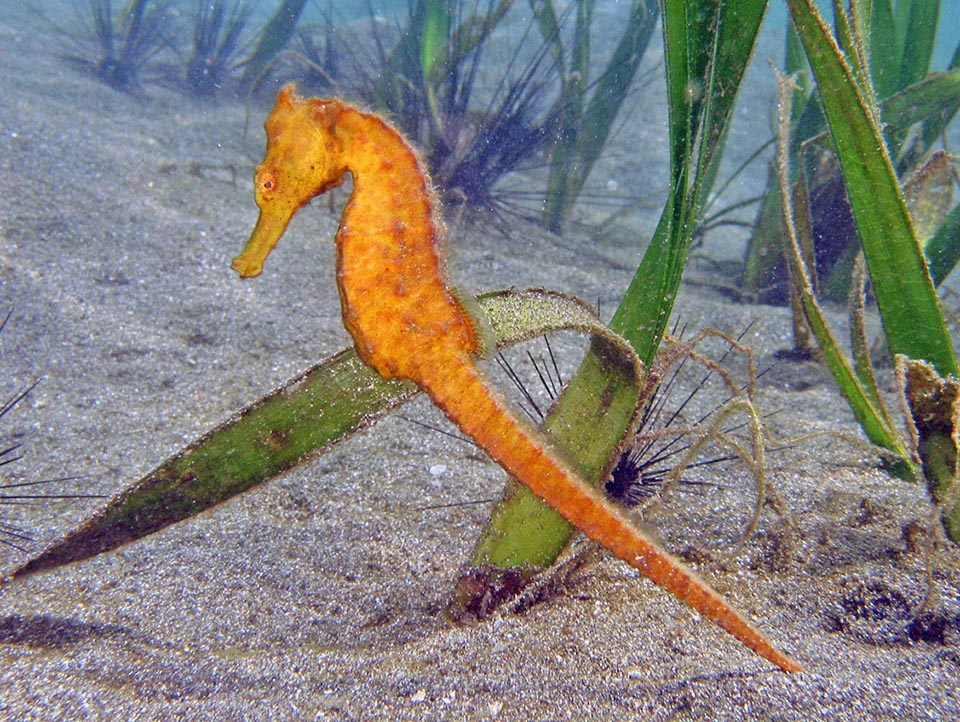 Apart the crown on the head the outline is sober, with no mimetic appendages. There are also specimens with orange, pink, pale grey or dark brown to black livery © Christian Knost

It frequents the prairies of phanerogams of the estuaries, often ignoring the mud, and the rocks covered by weeds in shallow waters, up to 8 m of depth, even if it has been sighted in the coralligenous at 68 m. 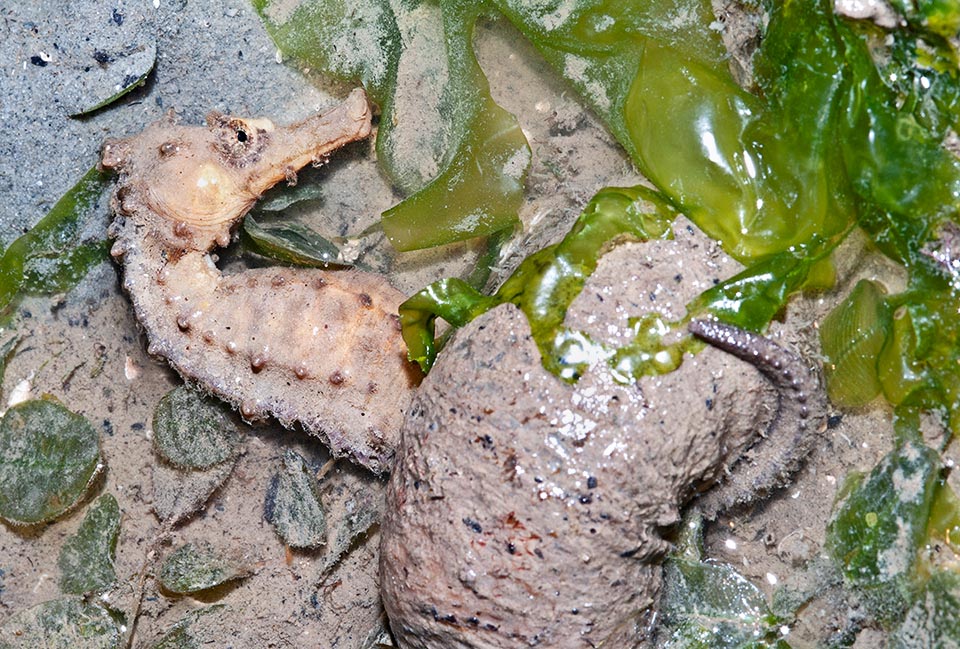 Like all seahorses the body has no scales but is armoured under the skin by bony plates with 11 rings belonging to the trunk and about 36 to the tail. 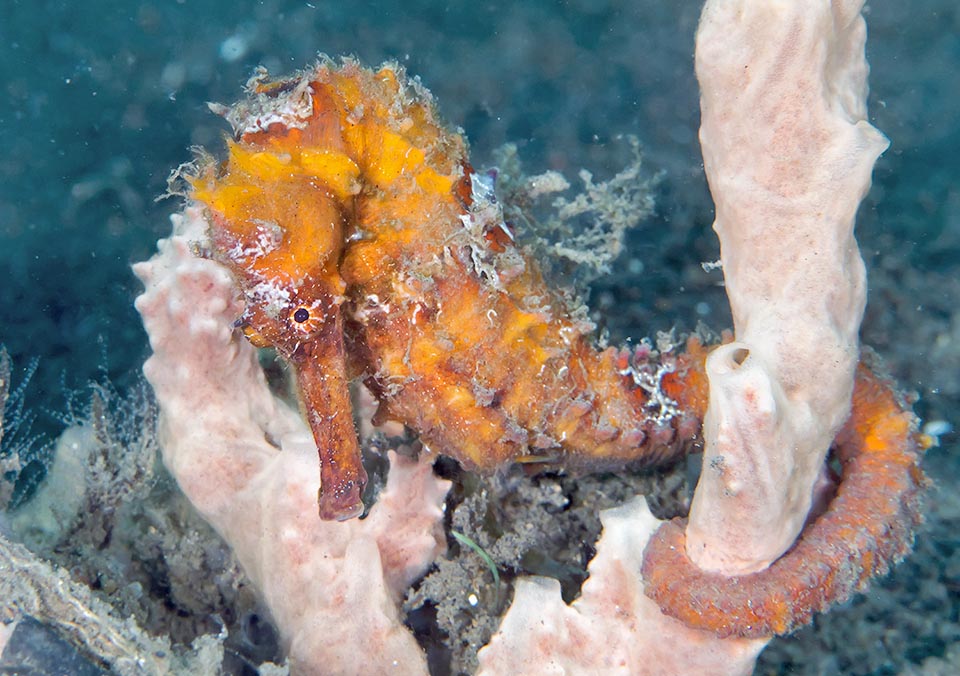 Stuck to substratum with its prehensile tail eats zooplankton and small crustaceans almost non-stop. It has no stomach, and the fast intestinal digestion is poorly efficient © Rickard Zerpe

Hippocampus kuda moves in an upright position, but when in danger and obliged to run away quickly, leans forward, tending to horizontal, and spreads the tail to reduce the friction.

Like chameleons, the eyes may move independently, with an ample vision of the surroundings in order to sight possible incoming predators, or for lining up for well evaluating the distances with a perfect binocular vision and suddenly suck in tiny preys that are gulped down whole by the small mouth, protractile because toothless.

The upper part of the head, relatively big if compared to the body, has a small crown, characteristic to the seahorses, formed by bony plates. The body has no spines but is protected by the blunt points that form from the crossing of the rings with the longitudinal crests.

The livery, often yellow with a very small black or reddish-brown dotting, is very variable. There are specimens of orange, pink, pale grey or dark brown almost up to the black colour. 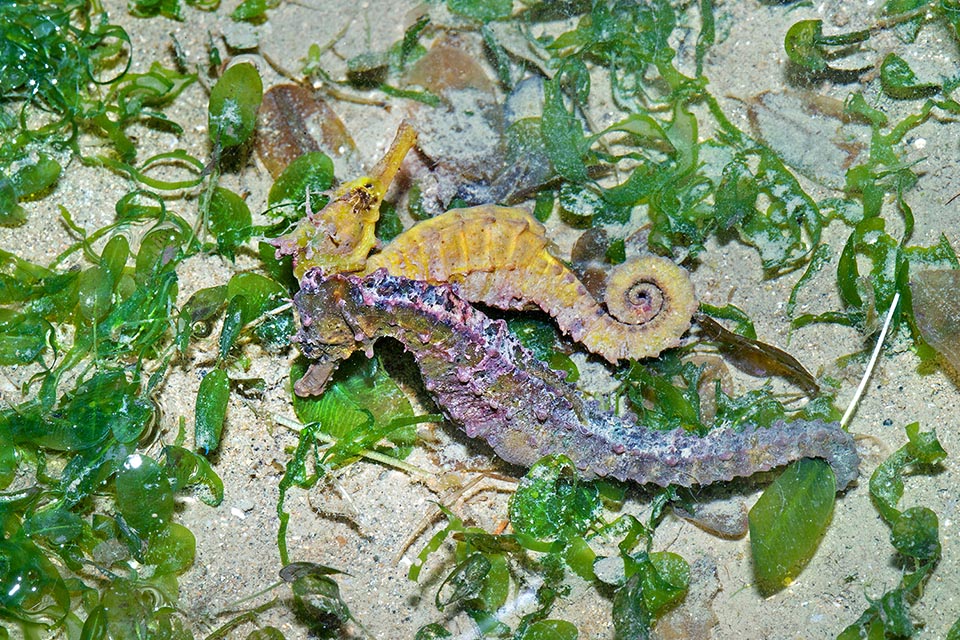 A couple. The nuptial dance ends with intertwined tails. The female lays even 1000 ova, fecundated at once, into the male incubating pouch © Ria Tan

The protection of the eggs is entrusted to the males who have a big ventral pouch completely closed, with a fore orifice commanded by a circular muscle. Inside it, the tissue is soft and vascularized for feeding the embryos.

Hippocampus kuda nourishes of phytoplankton and of small crustaceans it predates practically ceaselessly, because it does not have a stomach and the rapid intestinal digestion is poorly efficient. 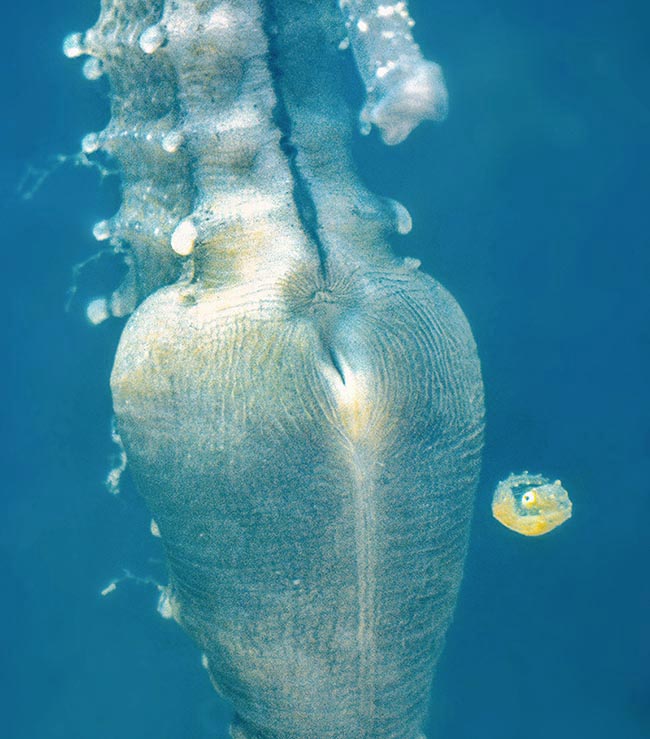 Embryos are fed by yolk by the male blood capillaries. The young are born after 20-28 days © Giuseppe Mazza

It attacks all small organisms moving on the bottom, mostly crustaceans, without forgetting the larvae and the eggs of the fishes carried by the currents

Conversely, unfortunately it has to do with various predators. Its livery has no frills and in fact is not mimetic like the analogous Hippocampus guttulatus of the Mediterranean area and even less compared to the tiny Hippocampus bargibanti practically invisible in the ramification of the gorgonians.

Its main natural enemies are crabs, rays, tuna and sea turtles, but the worst threat comes from man, seen that for the Chinese medicine it is a regulator for the nervous system with unbelievable immune and anticancer powers, that however delay aging.

25 million of them are caught per year, nothing compared to those intended for the domestic aquaria, especially since it has been reproduced in captivity.

As a matter of fact, the Spotted seahorse is very popular among the marine aquarists, suitable even for small pools and available with attractive colour variations.

However, it must be nourished several times per day with larvae of Artemia salina or other small alive crustaceans and by sure it is not a fish for beginners or for persons going on vacation, as it is easily attacked by dinoflagellates of the genus Oodinium often present in the aquaria.

For the wedding dance, ending in intertwined tails, it seems that it gets livelier colours.

At the right time the male empties the incubating pouch full of water pressing it with the tail, and the female introduces the ova there through the genital papilla, a sort of small ovipositor.

These are fecundated in the pouch that by the end may contain even one thousand eggs. 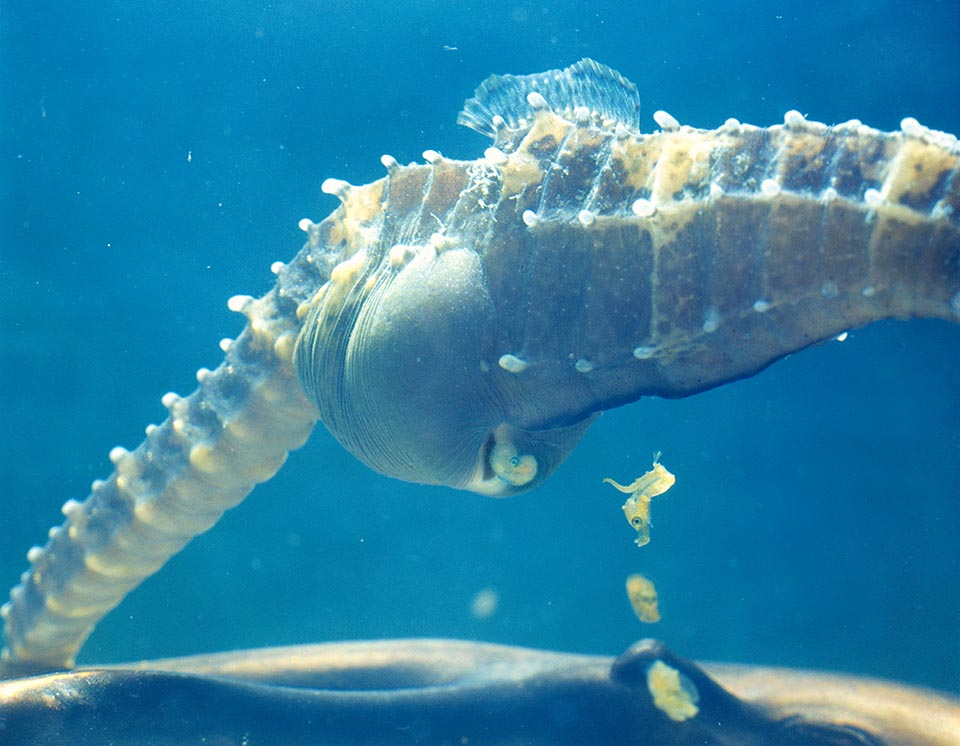 Delivery occurs in several times. Labour starts usually with the full moon but is linked also to the monsoons and the water temperature © Giuseppe Mazza

The young grow fed by the yolk and by the male’s capillaries. The incubation lasts 20-28 days and then, contracting delivers them in more time. They are about 7 mm long, already autonomous and quite like adults.

The resilience of this species is mediocre, with a minimum doubling time of the populations amounting to 1,4-4,4 years, but considering also the vast diffusion the vulnerability index is presently low and marks just 15 on a scale of 100.

The international trade is however monitored with licenses and a minimum size of 10 cm. 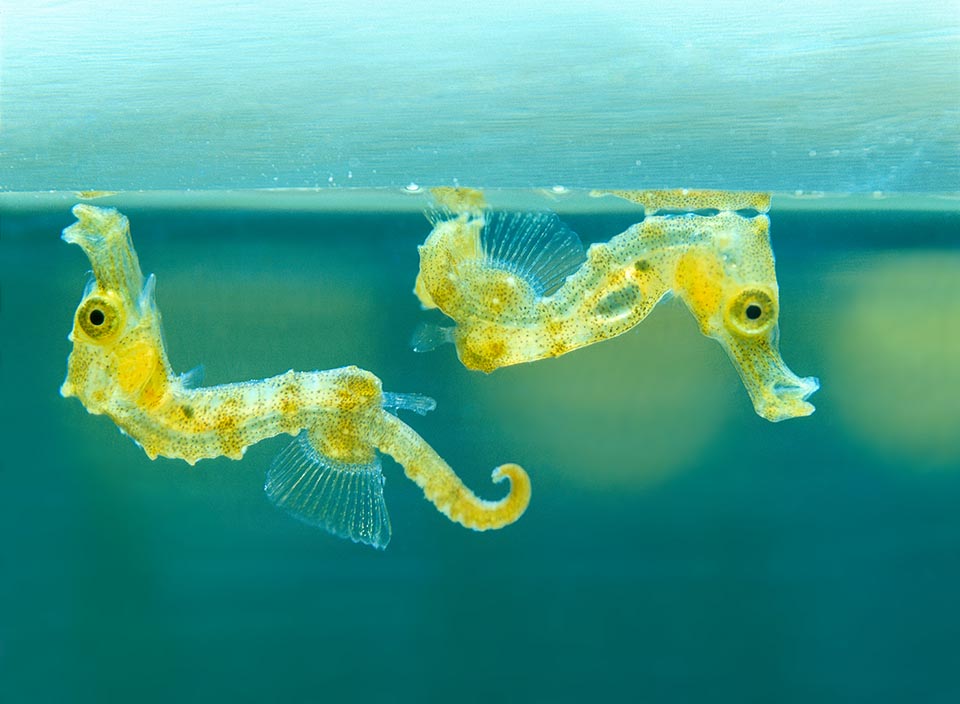 Newborns measure about 7 mm. They are already autonomous and equal to adults. The species is not endangered but menaced by the beliefs related to Chinese medicine © Giuseppe Mazza

In fact, we have not to forget that all seahorses appear globally in the “Red List” of the endangered species with the prudent label of “data deficient”. This means that we do not have sufficient elements for knowing if these species are endangered.

Hippocampus kuda was last modified: May 1st, 2022 by Peppino