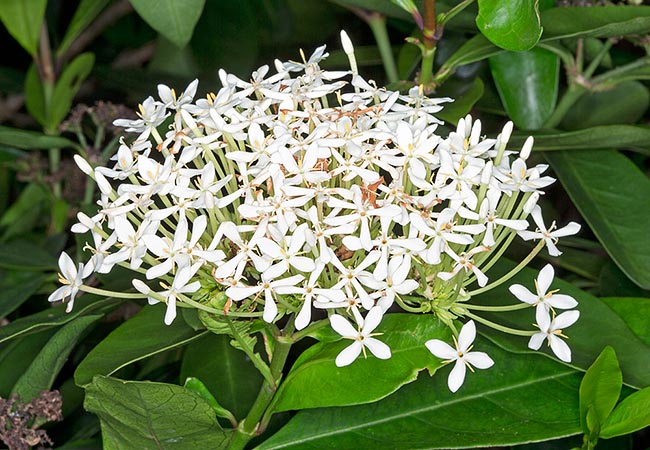 Ixora finlaysoniana is a shrub or an up to 5 m tall small tree of south-eastern Asia. The up to about 8 cm large terminal inflorescences are perfumed and follow one another almost without pause © Giuseppe Mazza

The generic name is probably the phonetic expression of the Sanskrit Ishwara (Shiva), to whom these flowers are traditionally offered by the Hindu believers; the species is honoured to the Scottish naturalist George Finlayson (1790-1823).

The Ixora finlaysoniana Wall. ex G.Don (1834) is a shrub or small evergreen tree much ramified, up to about 5 m tall, with leaves, on a 0,5-1 cm long petiole, opposite, oblong-elliptic to oblanceolate, 10-18 cm long and 3-7 cm broad, with obtuse or pointed apex with entire margin, coriaceous, of glossy intense green colour.

Erect terminal inflorescences, on an up to 2 cm long peduncle, in dense corymbiform cymes, of about 8 cm of diameter, carrying a multitude of white flowers, of 1,5-1,8 cm of diameter, perfumed. Calyx with 4 elliptic lobes having pointed apex, 0,5-1 cm long, hypocrateriform corolla (corolla with spread lobes perpendicular to a long thin tube), with 2-3,5 cm long tube and 4 elliptic to oblanceolate lobes with pointed apex, 5-8 mm long and 1,5-3 mm broad, and finally, the anthers, protruding from the tube, are 3 mm long. 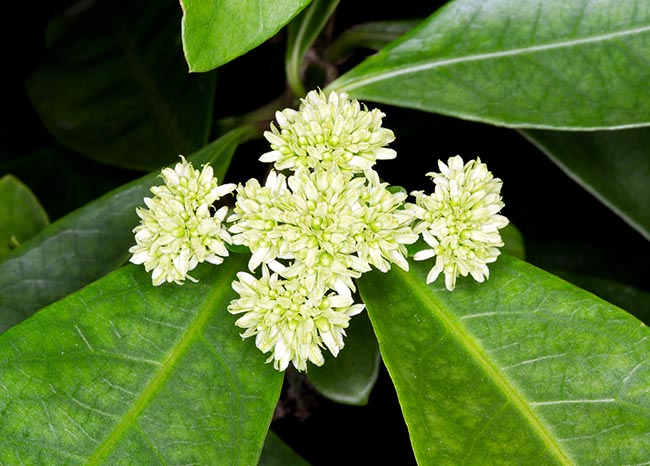 Unusual and decorative also in bud, is a plant used since centuries in traditional medicine for various pathologies © Giuseppe Mazza

The flowers are hermaphroditic but proterandrous (the male organs ripen before the female ones), therefore the self-pollination is prevented in favour of the crossed one. The fruit is a subglobose drupe of about 0,8 cm of diameter initially green, then blackish red when ripe.

It reproduces by seed, in draining loam maintained humid at the temperature of 24-26 °C, tip or semi-woody cutting, air layering and through the radical suckers forming at a certain distance from the mother plant.

Amply cultivated species due to its ornamental foliage and the showy and perfumed inflorescences, produced practically continuously, in the gardens of the tropical and humid subtropical climate zones, as isolated specimen, in mass or for borders and hedges. It requires an exposition in full sun, even if it bears a slight shade, and well drained soils rich of organic substance maintained humid, acidic or neutral.

Useful are periodical prunings, in order to keep compact the posture and to stimulate the blooming, and fertilizations with hydrosoluble balanced products for acidophilic plants with microelements. Outside the tropical and subtropical zones it is to be cultivated in pot, as it doesn’t bear temperatures close to 0 °C, unless exceptional and for a very short period, in order to be sheltered during the coldest months in a particularly luminous ambient with lowest night temperatures not under the 16 °C.

All parts of the plant are utilized in the traditional medicine in the origin countries for several pathologies.