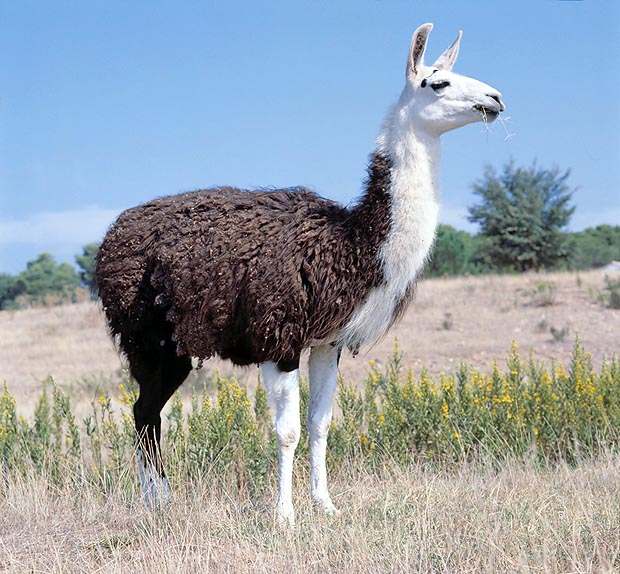 Important South American genus of Camelids (Camelidae), including two species, closely related among themselves, and two domestic subspecies, which are the Llama (Lama guanicoe glama) and the Alpaca (Lama vicugna pacos), derived, after the biologists, in recent times, from the Guanaco (Lama guanicoe Müller, 1776) and from the Vicuña (Lama vicugna Molina, 1782).

These animals are all afferent to the order of the Artiodactyles (Artiodactyla), to the suborder of the Tylopods (Tylopoda) and to the family of the Camelids (Camelidae).

Before the arrival of the Europeans, the Inca were hunting the Guanaco with the bow, and only in exceptional circumstances they did hunt the Vicuña.

Later on, also thanks to the introduction of the horses by the Spanish settlers, the hunting to these camelids, having become easier, increased and they invented a special tool, the “bolas”, formed by two balls of stone, united among them by means of a rope. In spite of the simplicity of this hunting weapon, when they were thrown on the legs or the neck of the animal, they got wrapped causing their fall and often the fracture of one or more limbs. The bolas are still nowadays employed when hunting the rheas in South America.

The most known domestic subspecies, zoo technically most important and object of this text, is the Llama (Lama guanicoe glama), which, historically, for the Inca was performing at the same time the function assigned in our continent to the oxen, horses and sheep. In short, an animal which has in the same time the aptitudes of three different domestic species. Docile animal, even if often stubborn as all camelids, the llama is capable to carry heavy loads, covering some forty kilometres per day also on very rough tracks. Moreover, it furnished to the South American populations, before the westerners’ arrival also wool, meat and milk.

Following the colonization by the Spaniards, and the consequent introduction of tamed and bred animals coming from the Old World, the importance of this species has been declining on the zoo technical point of view, and its herds have also suffered, during the centuries, from a considerable numerical contraction, and in fact the IUCN and the Wwf are nowadays obliged to monitor its demographic density.

Its employment, however, is widely done even now in South America, especially in the mountainous regions, where any other animal of burden is inadequate. The wool of the alpaca is more prized, even if in absolute, the one having the greatest value, is the wool gotten from the animals born from crossings (thing which is very frequent and possible, seen the phylogenetic proximity) between the alpaca and the llama, called “Huarizos” if sons of male of llama and a female of alpaca, or “Mistis” if vice versa.

Even if it is nowadays raised also in Europe, Italy included, for its wool, and having therefore an amplified geographic distribution, the llama, with the alpaca, the guanaco and the vicuña are all native to South America.

They live and have their original nucleus on the Cordillera of the Andes, even at altitudes over the 4.000 m, where they may perform at full rhythm all their activities, thanks to their exceptional ability to assume oxygen from the rarefied air. In their blood, in fact, there are about 12 million of red cells per cubic centimetre of blood, against the about 5 million of red cells per cubic cm present in the same volume of human blood. Some species, however, permanently live also in the Argentine Pampas and all the specimens abandon the high altitudes during the cold months, due to the climate and the lack of food.

Even if being strictly related with the Camelidae, such as the Camel (Camelus bactrianus) and the Dromedary (Camelus dromedarius), and even if it is thought that they have had origin from a common progenitor native to North America (please refer to the texts about the dromedary and the camel), the llamas are quite easily identified due to a series of very evident characters.

First of all, they do not have the typical humps of the camel and of the dromedary, then, they have long and erect ears (in the camels the same are small), a remarkably shorter tail, more erect neck and less enlarged feet, always with the characteristic pad of the Tylopods (Tylopoda).

Much smaller are then the dimensions, seen that the llamas do not exceed, for what the mass is concerned, that of a European Red Deer (Cervus elaphus), reaching the 1,30 m at the withers, whilst the camel and the dromedary stand among the greatest known artiodactyles. The llamas have a fairly robust structure even if somewhat slender: the outline of the back is rectilinear and slightly raised backwards. The legs are slim and the feet, even if provided of the pads typical of the suborder, are equipped with pointed clogs. Also the muzzle, even if reminding superficially that of a sheep, is structurally analogous to that of the camels: the nose, devoid of “rhinarium” typical in the Felidae (the part covered by bare skin), is endowed of long oblique nares, and the upper lip is divided till the base. 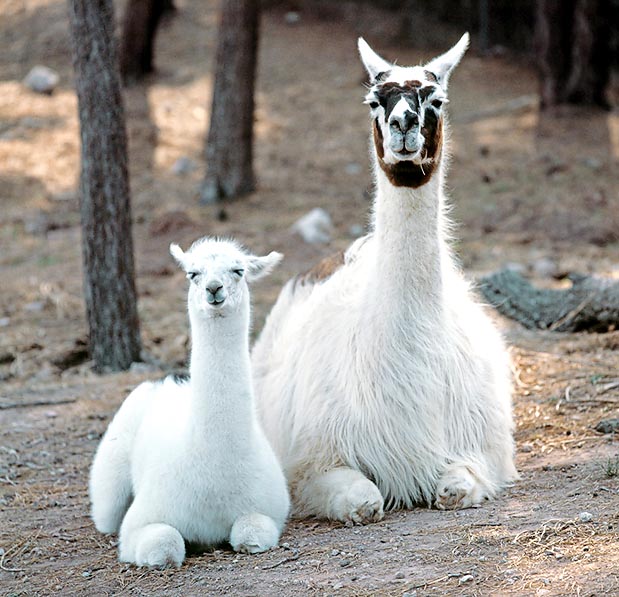 Female with calf. If upset, the llamas often spit to the teaser’s face © Giuseppe Mazza

Thanks to this last particularity, all the species of llamas have developed the quite disagreeable habit, from the human point of view, to hit the mark with powerful spits whoever may disturb them.

The coat, beige or brindled with white, is always very soft and abundant, keeping however in mind that among the domestic species the alpaca is the most prized, or the outcome from the crossing between these two species.

In the species living in the wild, the period of the mating season coincides with the late spring.

The calves, delivered in number of one or two (single or double deliveries), come to life in November and are cared by the parental pair for about one year.

The llamas (also the feral groups) live in herds of medium entity, led by one only dominant male, and are composed of females and calves. The young males, sent away by the father leader of the pack, unite in groups of bachelors, waiting to form their own harem. The old individuals, once sent away from their herd, lead, on the contrary, a solitary life.

In the herds every survey and protection activity is entrusted to the male, so much that if this is killed, the females are often even unable to run away from a wolf or a puma. They remain at the mercy of their foes and are unable to protect their own progenies. Among the natural foes, the most terrible is the Puma (Puma concolor), which, however, prefers to attack the young specimens, easier to hunt. The wolf is another predator. Even more insidious is the hunting carried on by the man, who tries to seize the entire herd, by killing the male of the group.