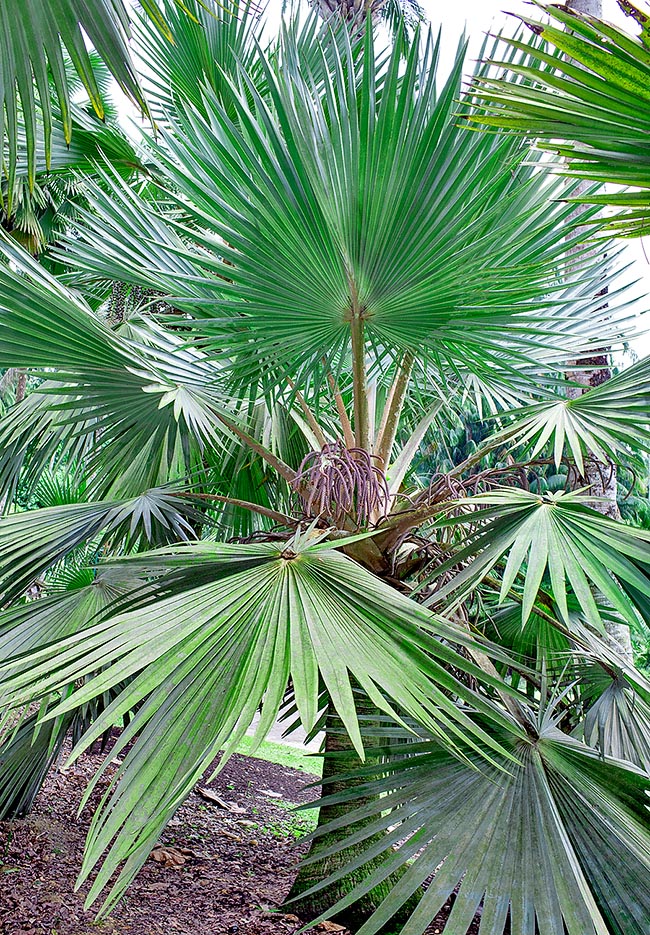 Species not considered at risk of extinction in its natural habitat, Latania lontaroides is native to Mascarenhas Islands where can be 12 m tall with stem, swollen at the base, of about 25 cm of diameter © Giuseppe Mazza

The genus Latania is distributed in the Mascarenhas islands, Indian Ocean.

The name of the genus Latania comes from the Latinization of the epithet with which the palms are called in Mauritius Island: Latanier.

The name of the species, lontaroides, refers to the resemblance with the palm Borassus flabellifer and comes from the Malay term “lontan” that identifies the palms of the genus Borassus and from the Greek term eidos, meaning “similar”.

Latania lontaroides (Gaertn.) H.E.Moore, 1963 is presently considered as at risk of extinction in its natural habitat and is inserted as Endangered in the Red List of IUCN since 1998.

The initial distribution area enclosed the reefs and the coastal ravines of the Mascarenhas Islands archipelago, but presently can be found spontaneous only in Reunion Island and in particular on the coast between Petite Île and the island of Saint-Philippe.

Its habitat has gone narrowing due to the destination of the territories to agriculture and the increase of human settling.

On the other hand, this species has been for long time internationally traded its high ornamental value and consequently it is nowadays commonly diffused in cultivation in all countries of the subtropical belt.

Latania lontaroides is a palm with a single stem, up to 12 m tall, and broad with a diametre up to 25 cm, characterized by a very slow growth. In the adult specimens the stem is grey, smooth, slightly swollen at the base (the so-called “elephant foot”) and displays rings forming the scars of the fallen leaves.

The leaves, round, rigid and coriaceous, have a length of 2 to 3 m with a diametre up to 3 m and are strongly costapalmate. The costapalmate leaf differs from the palmate one, more commonly known, because the foliar segments are not all attached to the end of the petiole, but are symmetrically distributed in the final part of the petiole, that then continues inside the foliar lamina folding the terminal part downward. The foliar lamina is divided in foliar segments long from half to one third of the lamina itself.

A characteristic of this species is that the leaves of the young plants, especially if exposed to the sun, become completely red, together with the petioles that present the base covered by white wax. From this characteristic comes the common name of red latania.

It is a dioecious species having female flowers on different plants. Here close-up of the leaves of a male plant with inflorescences remains © Giuseppe Mazza

With the growth of the plant the intensity of the colour fades and the leaves turn green, keeping the red colour only on the border of the foliar segments and on the petioles. In the adult specimens the colour is dark green on the upper page and pale green in the lower one, but often the leaves are covered by a glaucous patina, especially in the tropics. The petioles of the adults may be covered by down of colour varying from pink to white that also covers the low part of the lower lamina of the leaf.

Another characteristic of the species is that the borders of the leaves and the prominent veins of the foliar segments have small spines.

The fruits have the shape of a plum, are brown when ripe up to 7 cm long, with one single seed inside. The morbid pulp of the fruit is edible, with a taste recalling the coconut. The seed is round at one extremity and pointed at the other, very grooved and engraved. 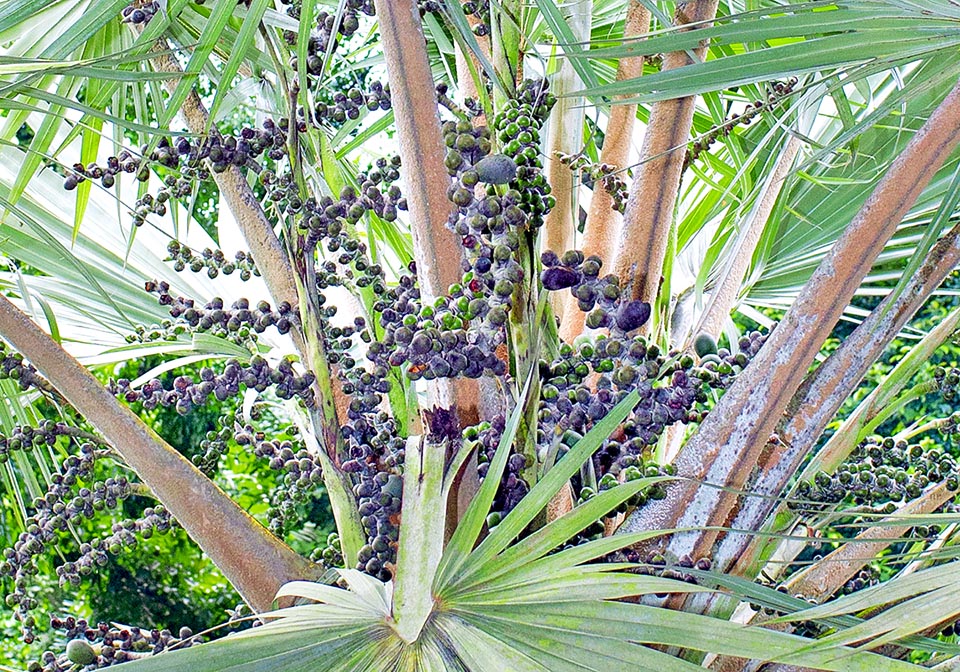 The up to 7 cm fruits with one single seed inside, have edible pulp. Can grow in full sun also in Mediterranean climates © Giuseppe Mazza

This species is very much cultivated, in all the tropical belt, in the parks and gardens as well as in pots, being very slow in growing. It beloves the heat and tends to suffer in the climates where the cool season is long. In the Mediterranean climates having no frosts it grows very slowly in respect to the growing rate it has in the tropics, even if low. Have been reported experiences of survival to short frosts (-2 °C) by adult specimens, well settled. It stands well with the marine climate and the winds, provided they are not cold.

Latania lontaroides must be placed in full sun, also in the case of young specimens. When it grows in the shade, it loses the red colour of the leaves and of the petioles and the leaves get longer.

It prefers to be regularly watered even if it is able to sustain short periods of drought, especially in case of adult specimens. The loam must always be draining.