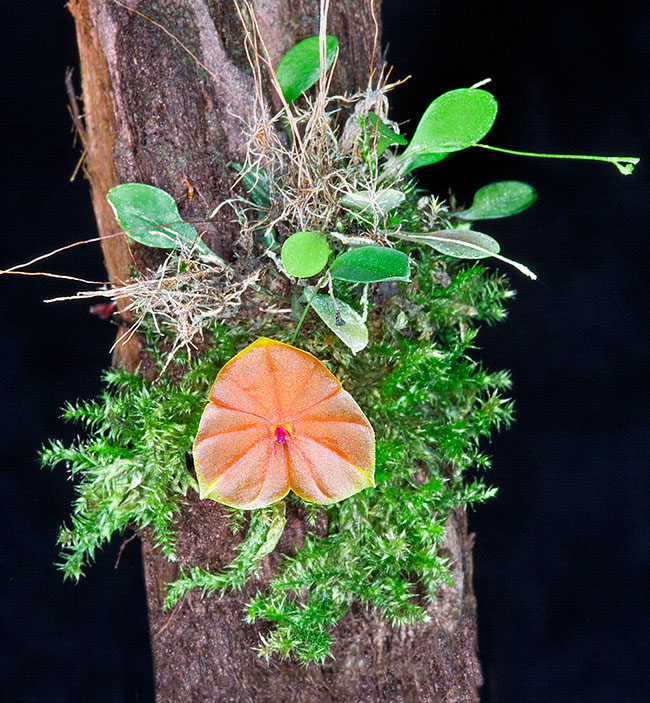 The species is native to Colombia (Risaralda) where it grows in the humid forest between the 500 and the 1200 m of altitude, in a climate characterized by averagely high temperatures and high rainfall distributed all over the year.

The etymology of the generic name has not been specified by the author, after some, it is the combination of the Greek substantives “λεπίς” (lepis) = scale and “άνθος” (anthos) = flower, with reference to the shape of the flower of many species. Others think it is coming from “λέπος” (lepos) = bark and άνθος” (anthos) = flower, seen that the plants of the genus live on the bark of the trees. The specific name is the combination of the name of the genus Telipogon and of the Latin substantive “flos, -oris” = flower, due to the resemblance of the flowers.

The Lepanthes telipogoniflora Schuit. & A.de Wilde (1996) is a cespitose epiphyte species with short rhizome and erect stems, about 1 cm tall, covered by sheaths ending in an ovate-acuminate infundibuliform expansion with microscopically ciliate margin.

The stems are provided at the apex of one only elliptic leaf with obtuse apex, about 1 cm long and 0,7 cm broad.

Racemose inflorescences, on a 1-1,5 cm long peduncle, with flowers opening one by one in succession, almost circular, of 1-1,4 cm of diameter, with 3-4 mm long pedicel and ovary.

It reproduces by seed, in vitro, and by division with each section provided of at least 3-4 stems. Mini orchid with characteristic relatively big flowers for the Lepanthes, bigger than the leaves themselves, become in short time popular among the collectors of this genus, requires a semi-shady position, medium-high temperatures, with lowest night ones not under the 15 °C, constantly high humidity, around the 70 % for the plants in pot, 80 % or more for the mounted ones, and continuous light ventilation. 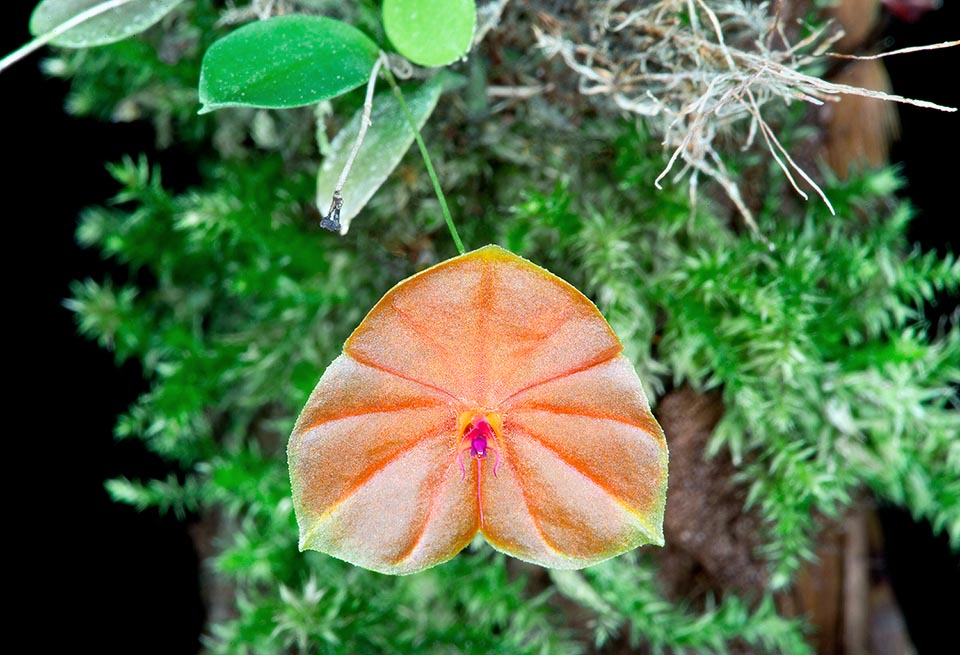 Mini orchid very popular among the collectors due to the racemose inflorescences with unusual flowers of 1-1,4 cm of diameter, almost circular, bigger than the leaves © Giuseppe Mazza

It may be mounted on pieces of bark or rafts of cork or of roots of arborescent ferns, with sphagnum at the base to maintain the humidity to the roots, or cultivated in small pots with draining compost that can be formed by fragments of bark of fine size, charcoal and inerts with addition of sphagnum. Abundant and regular watering during the year, not having a rest time, but without stagnations, that may easily cause root rottenness, utilizing rainwater, by reverse osmosis or demineralized. Properly spaced fertilizations and alternated by watering, in way to avoid salts accumulations at the roots, particularly sensitive, with a product specific for orchids at ¼ or less than the dosage shown on the package.

The species is inscribed in the appendix II of CITES (species whose trade is internationally ruled).