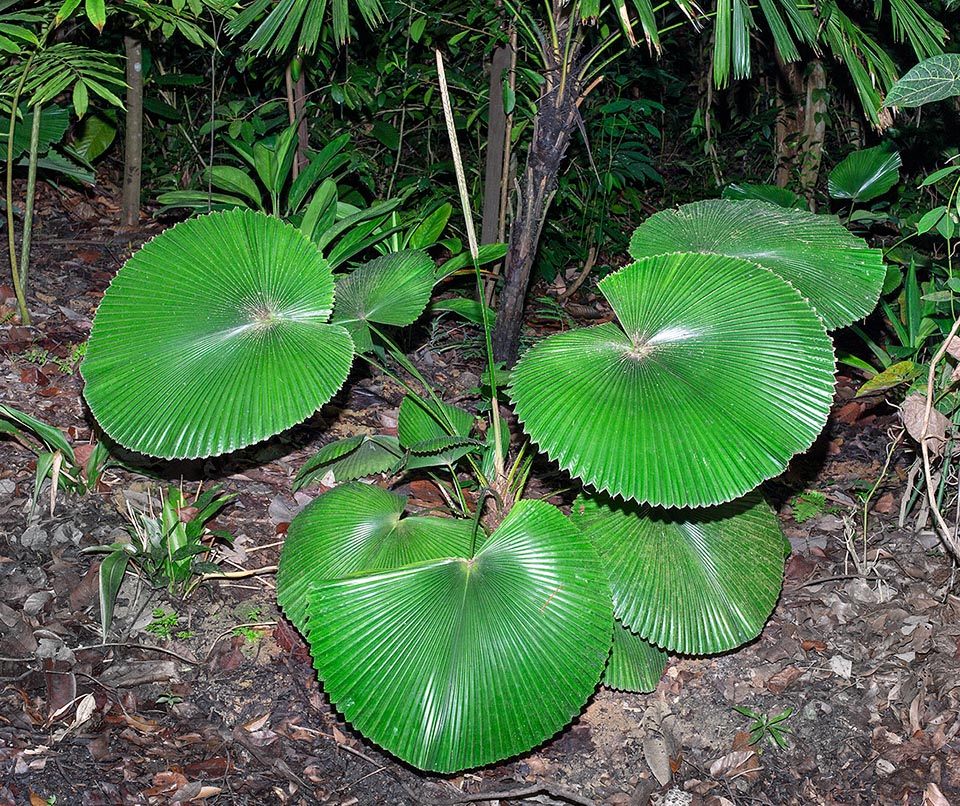 Native to Borneo rainforests, Licuala cordata is by sure one of the most beautiful small palms © Giuseppe Mazza

Licuala cordata Becc. (1886) is a dwarf species native to the underwood of the tropical rainforests of Borneo Island and in particular in Central Sarawak.

The name of the genus Licuala Wurmb is the Latinization of the name “lkowalà” used by the natives of the Moluccas to identify the species type Licuala spinosa Wurmb (1780). The specific name cordata refers to the shape of the leaves and comes from the Latin cordatus, meaning heart-shaped.

Licuala cordata is considered as one of the most beautiful palms among the small ones. This species reaches, at the most, an overall height of 1,2 m and a maximum breadth of 1,8 m. 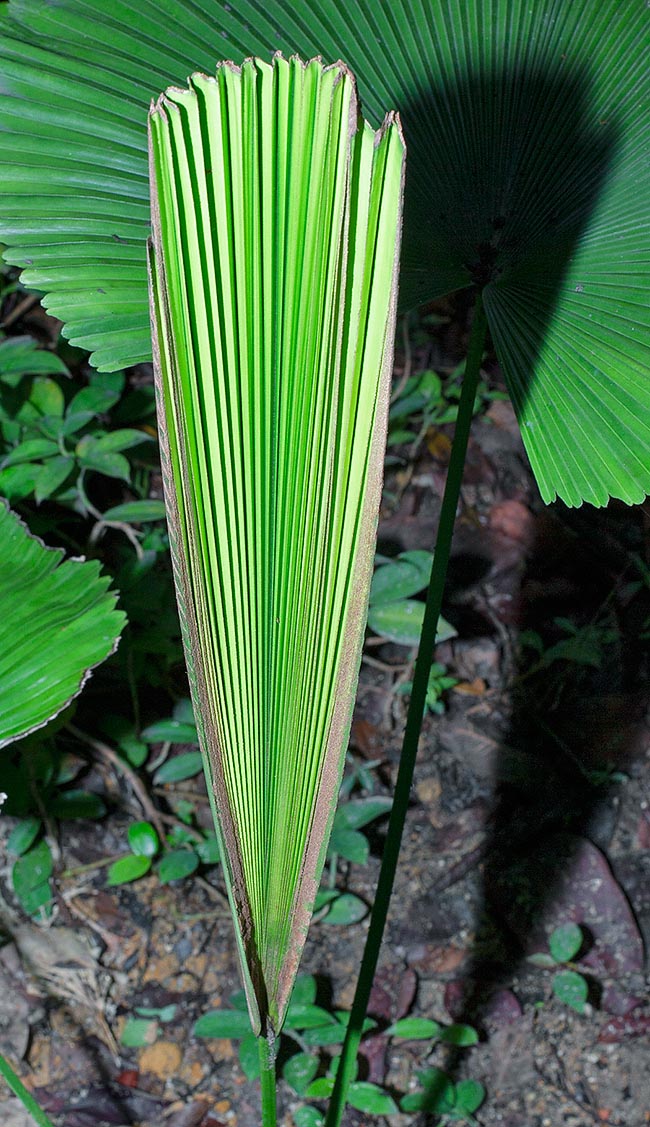 Growing leaf. Born for the tropics, unfortunately does not bear temperatures under the 20 °C © Giuseppe Mazza

The stem is thin, covered by brown fibres and can reach a height of 30 cm, with a very slow growth. The petioles are bright green and up to 30 cm long, covered by rigid and pointed brown spines, up to 0,5 cm long, and by brown fibres in the basal part. There is no foliar sheath between petiole and stem.

The beauty of this species stands in the leaves that render it one of the most sought-after palms by lovers and collectors.

The leaves are palmate, large, of bright emerald green colour, up to 60 cm long. The lamina is usually undivided, with the margins of the basal foliar segments overlapping, giving the leaf a circular appearance. The lamina is almost flat, corrugated and incised in correspondence to the veins and presents a serrated edge, reminiscent of the foliar segments merged together. Often the leaves are heart-shaped.

Some rarer specimens display the lamina divided in 3 or 4 marked lobes having the edges almost overlapping.

The inflorescences generate among the foliar bases, are up to 45 cm long and are ramified in two orders, with 10/14 secondary ramifications. The hermaphrodite flowers, of cream colour, are followed by brown fruits containing the seeds, very slow to germinate.

Licuala cordata var. ashtonii differs for the characteristic of having incomplete divisions of the foliar lamina, from the base up to about one third of distance from the margin, creating “windows” in the lamina, instead of dividing it in different entire lobes as in the Licuala cordata var. cordata. Also the flower of the var. ashtonii differs from that of the var. cordata for the corolla that is broken up to the level of the apices of the calyx.

It is a species rare in cultivation, but is one of the most admired and looked for, palm by the botanic gardens and by the collectors, due to the beauty of the leaves and the posture of the plants. Born for tropical or warm and humid subtropical zones, is unluckily difficult to cultivate in the sites where the average temperature goes under 20 °C.

It requires some fertile soil rich in humus and slightly acidic. The substratum must be drained and kept constantly humid and the plant is to be often watered, without ever allowing the substratum to dry up between the different waterings.

It comes from the tropical forests underwood and hence loves the shady positions, sheltered by trees and shrubs. It does not stand to be exposed in full sun or in the wind that can irreparably ruin the leaves.