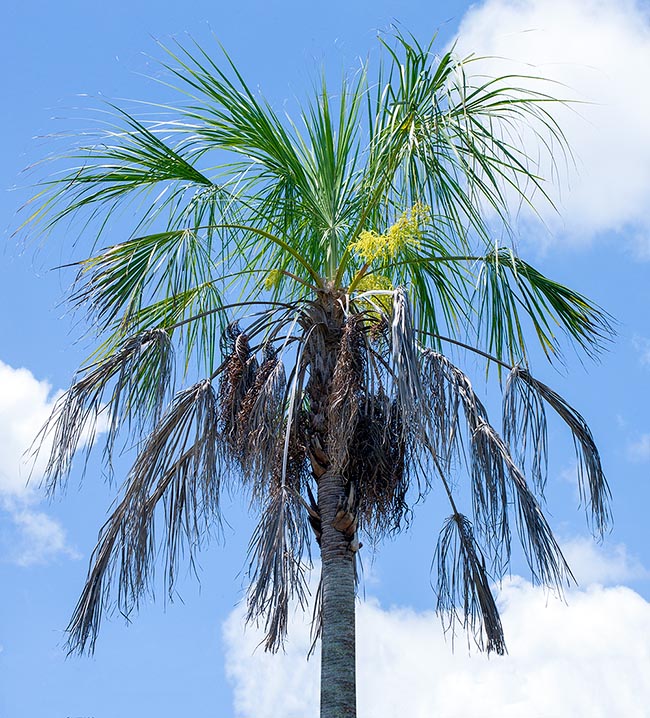 The species is native to Australia (Northern Territory and Queensland) where it lives in the open forests, often on steep slopes and sandstone outcrops, from the sea level up to about 300 m of altitude.

The genus was dedicated to Patrick Murray, Baron of Livingston, who destined his collection and his garden to botanical garden, later become the present ‘Royal Botanic Garden Edinburgh’; the name of the species is the Latin adjective “inermis, e” = armless, with reference to the margins of the petiole.

The Livistona inermis R.Br. (1810) is a rather variable monoecious species with hermaphroditic flowers, solitary, with erect stem, 6-9 m tall and of 6-12 cm of diameter, slightly dilated at the base, vertically fissured, of greyish colour with the annular traces of the foliar scars and the residues of the petioles remaining long time in the basal part up to about 2 m of height.

The leaves are costapalmate, almost circular, wavy, 35-70 cm long and broad, of green to grey green color, at times pruinose below, divided up to almost the base in 24-46 rigid segments, in their turn divided for the 70-80% of their length in two linear segments with long pointed apex slightly diverging. The petioles, 0,6-1 m long and about 1 cm broad, are provided at the base, for a short distance, of blackish red spines, up to 0,5 cm long, almost armless in the remaining part, of green color with more intense purple pink hues below; the foliar base degenerates for a good part in a mass of fibres surrounding the stem.

Inflorescences between the leaves (interfoliar), 0,4-1 m long, of cream white to yellowish colour, with ramifications of third order and several rachillae, 1-9 cm long, with tiny hermaphroditic pedicellate flowers, solitary or in groups of 2-3, with 6 stamens united at the base and 3 carpels free at the base and united at the apex to form a unique style with trilobed stigma. Obovoid to pyriform fruits, 0,9-2,5 cm long and of about 0,7 cm of diameter, of blackish violet to glossy black color when ripe, containing only one ellipsoidal fruit, about 0,8 cm long and of 0,5 cm of diameter, of dark brown color. 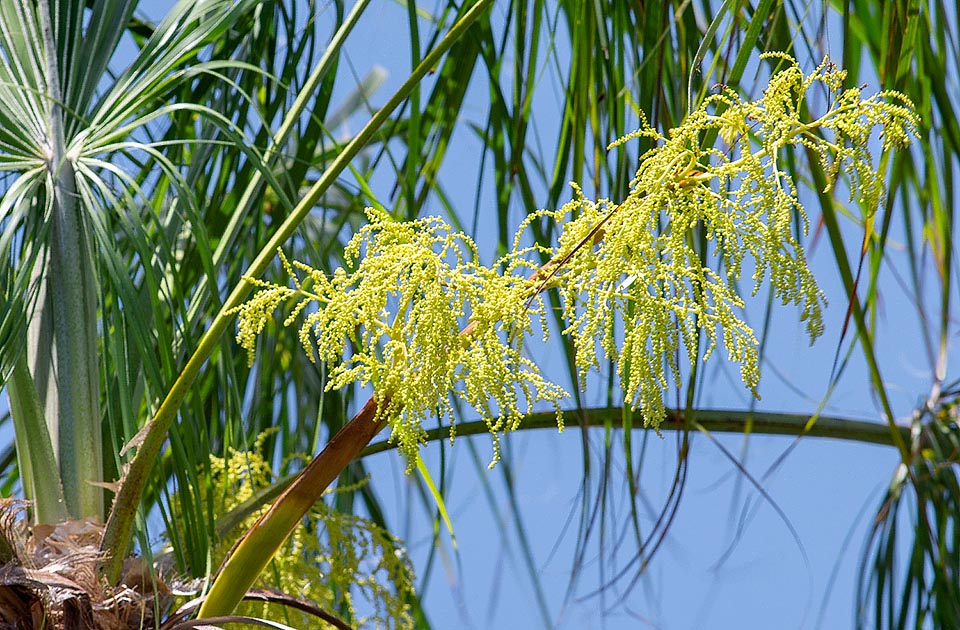 The even 1 m long inflorescences, with numerous ramifications, carry tiny hermaphroditic flowers. Slow growth and difficult cultivation out from its environment © G. Mazza

It reproduces by seed, previously kept in water for three days, in sandy loam, draining, maintained humid at the temperature of 26-28 °C, with germination times up to one year; the young plants are easily subject to rottenness.

Attractive species due to its thin stems and the finely incised leaves, but of slow growth and of difficult adaptation to environmental conditions differing from those of the origin ones, requires full sun, particularly draining soils and averagely high temperatures, even if able to bear, when adult, temperature values around the 0 °C if exceptional, and for very short period, but badly bears the long periods of medium-low temperatures that occur, for instance, in winter in the Mediterranean type climates. In nature it resists to the fires that frequently develop and that at times cause damage the meristem of the young plants that may produce consequently various stems, giving the impression of a cespitous plant. Particular uses by the local populations are unknown.