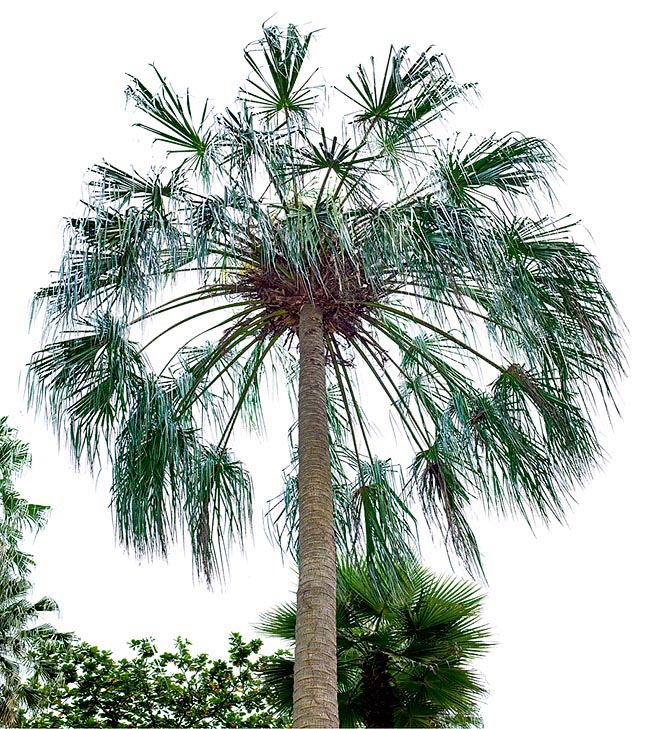 Native to Western Australia Kimberley region, with small colonies up to the Northern Territories, Livistona lorophylla can be 15 m tall with globose crown formed by 25-40 leaves. It grows up to 300 m of altitude © Giuseppe Mazza

Livistona lorophylla Becc. is native to the region of Kemberley in Western Australia and can be found in small settlements up to the Northern Territory, in the King Leopold Range and in the Durack Range. It grows in the woods, in the gorges and in the outcrops of sandstone, up to 300 m of altitude.

The genus Livistona has been dedicated by Robert Brown to the explorer Patrick Murray, Baron of Livingstone (1632-1671), collector and botanist amateur, whose plants formed the original nucleus of the Royal Botanic Gardens Edinburgh, created in his park.

The species name Livistona comes from the Greek words “lorõs”, meaning “leather strip” and “phýllon”, that means “leaf”, with reference to the shape and the consistency of the foliar segments.

The common English name is “Cape River Fan Palm”, from the area where it is more present.

Livistona lorophylla has an up to 15 m tall stem, with a diametre of 8-20 cm, grey, that presents very close internodes caused by the scars of the fallen leaves. In the lower part of the stem can be found the remnants of the petioles bases that persist for a long time on the stem, forming a characteristic spiral interweaving.

The foliar crown is globose and is formed by 25-40 leaves on long petioles, with lamina deeply divided in long coriaceous segments, that give the crown a very airy appearance, Livistona lorophylla is resembling a lot Livistona inermis, but has a bigger stem and leaves.

The costapalmate leaves are 60-100 cm long, very coriaceous, circular, of glossy green to grey colour, covered by a slight pruina on both surfaces. The foliar lamina is divided for almost the totality of its length in 30-50 foliar segments, divided at the apex for three quarters of their length in two apical, acuminate to filiform, lobes, very drooping.

The petiole is arcuate, woody, 100-200 cm long, 10-17 mm broad, flat above and with margins equipped with curved black spines, irregularly arranged, especially in the basal part, up to 10mm long. The base of the petiole presents several dense and persistent fibres wrapping the stem until the fall of the petiole. There is no sheath.

The inflorescence is interfoliar, 20-160 cm long, and does not extend beyond the crown. It presents a peduncular bract and several bracts of the rachis having a tubular shape, sparsely tomentose. The inflorescence is ramified up to 3 orders, with 4-8 6 cm long rachillae, glabrous, bearing hermaphrodite flowers, solitary or in small bunches of 2-4, infundibuliform, 1,2-3 mm long, of cream colour. 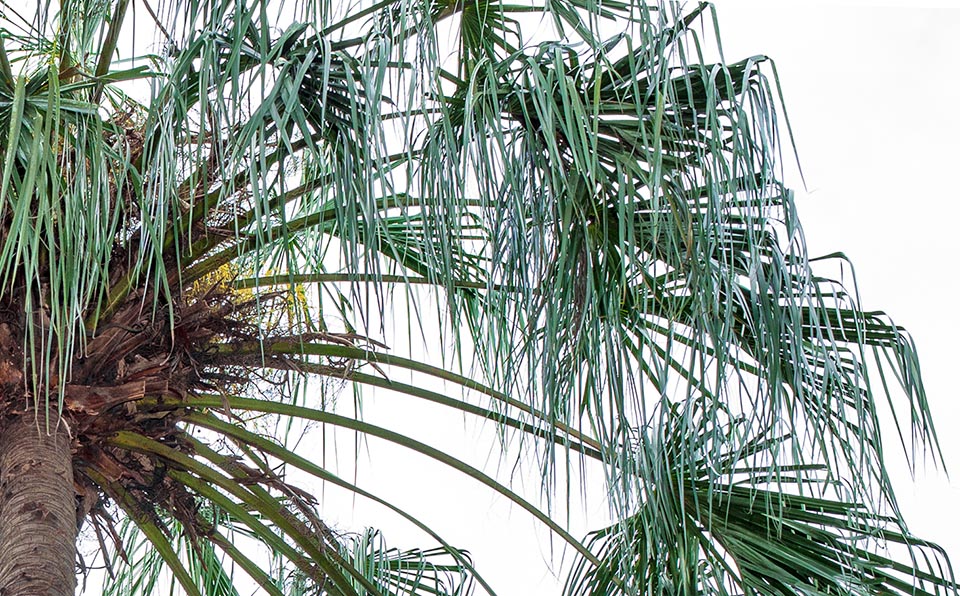 Detail, with the typical segments resembling leather strips and an inflorescence at the leaf base. The species is not endangered but is very cold, cultivable only in the tropics © Giuseppe Mazza

Livistona lorophylla is functionally dioecious, like Livistona australis and the other Australian Livistona. Initially, the flowers are born hermaphrodite, but growing they become maleto produce clouds of pollen or female when they abort the anthers. Therefore, in order to be sure of the fruitification, it is necessary to have more plants. The fruit can be ovoid or pyriform, 8-14 mm long and with 6-9 mm of diametre, pruinose, dull black when ripe. It contains only one seed, 7-9 mm long.

Livistona lorophylla is considered a very ornamental species, but is rarely found in cultivation out of Australia, apart from the Botanic Gardens. It has a very slow growth also in the origin locations, but is a species that can adapt to various types of soil, provided well draining. It loves a position in full sun, since small, and resists drought. Conversely, it is not a species tolerating cold and can be cultivated only where the temperatures never fall under the -1 °C.

Livistona lorophylla is classified “Last concern”, species at minimal risk, by the International Union for Conservation of Nature (IUCN).