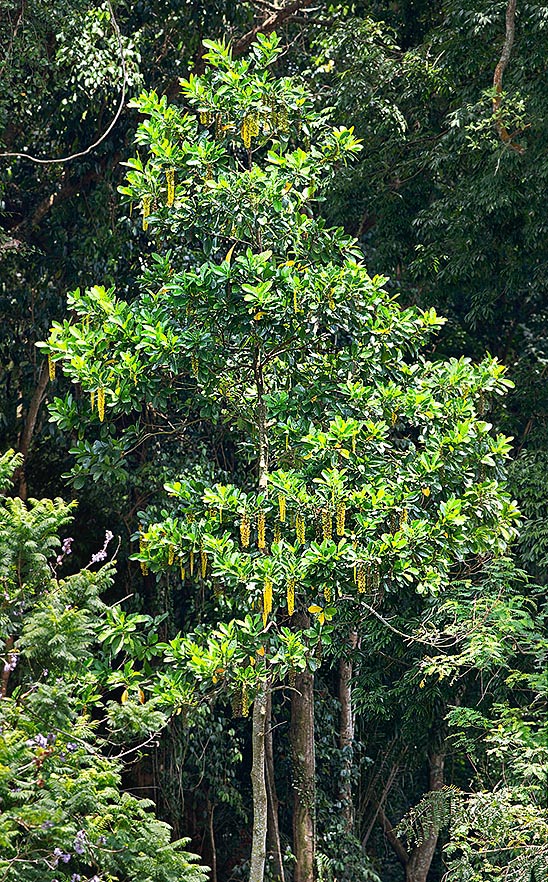 The species is native to Brazil (Acre and Pará), where it lives in restricted areas in the pluvial forest, mainly along the water streams, at low altitudes.

The name of the genus is the combination of the Greek term “λόφος” (lophos) = hill, ridge and “anthera”, from the Greek “ἄνθος” (anthos) = flower, with reference to the crests present on the loculi of the anthers; the name of the species is the present participle of the Latin verb “lactesco” = to turn milk, with reference to the white latex exuded from the cuts of the bark.

The Lophanthera lactescens Ducke (1925) is a semi deciduous tree, in particular in the cooler and driest climates, up to 20 m of height, with columnar trunk or ramified close to the base, of 30-40 cm of diameter, with thin brown-greyish bark from which wounds exudes a bitter white latex, and generally pyramidal crown.

The leaves, on a 3-4 cm long petiole, are simple, obovate, opposite or arranged in verticils, coriaceous and marked nervations, of bright green colour, up to about 24 cm long and 12-16 cm broad.

The inflorescences, present from February to May in the origin countries, are hanging terminal thyrsi, about 40 cm long, carrying some hundreds of small hermaphroditic pentamerous flowers, united in short cymes of 2-3 flowers each, with sepals, petals, filaments and styles of gold yellow colour and tricarpellar, trilocular, green superior ovary; the flowers, which open in succession proceeding from above to below, secrete an oily substance which attracts the bees of the tribe Centridini that are its main pollinators.

The fruit is a schizocarp, dried fruit that, when ripe, divides into three indehiscent mericarps of greyish colour containing only one blackish piriform seed, 3 mm long and 2 mm broad.

It reproduces by seed, previously kept in water for one day, which must be planted as soon as possible as its germinability is very short-lasting, with germination times of 2-6 weeks and first blooming after 2-3 years; it can reproduce also by cutting and air layering.

Considered as one of the most ornamental arboreal species due to its luxuriant foliage and the long drooping, long-lasting inflorescences, it has begun to spread in the tropical and subtropical countries only during the last decades of the XX century. Fast-growing, is of great landscaping effect in parks and gardens, as solitary specimen, in group or in rows, in particular as road tree, proving suitable for this purpose also in particularly polluted cities. It requires a humid tropical and subtropical climate, an exposition in full sun or slightly shaded and deep soils rich of organic substance, acidic or neutral, draining, maintained almost constantly humid, but without stagnations. 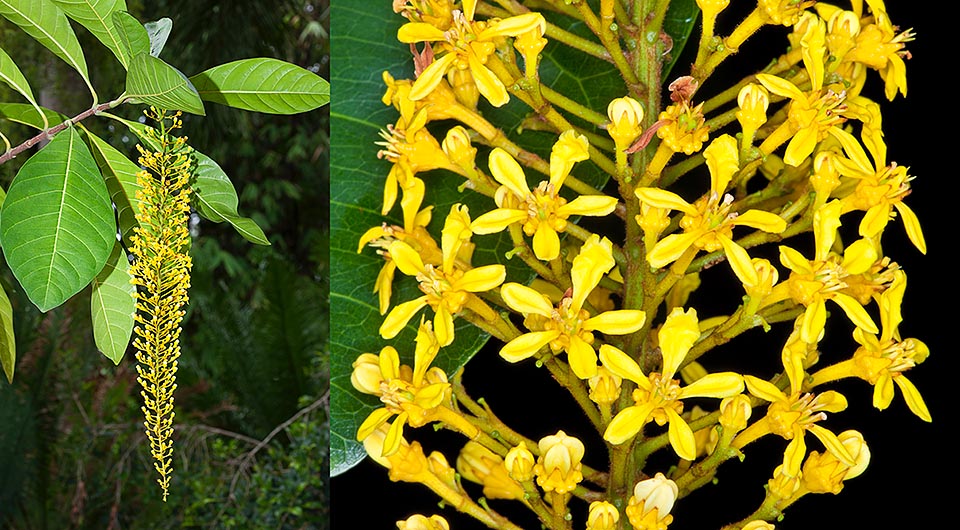 One of the reasons having limited its diffusion is the particular sensitivity to the transplants, so, when possible, it is much better to sow directly in the ground, preparing properly the same, even in full sun or under a slight shade. Due to its fast growth has revealed suitable for the afforestation of degraded areas and, furthermore, its wood has good characteristics of compactness, durability and resistance to the xylophagous insects, therefore is suitable for employment in the constructions and in various carpentry works.

The leaves and the bark are utilized by the native populations in the traditional medicine, in particular as febrifuge in malaria treatment.

→ To appreciate the biodiversity within MALPIGHIACEAE family please click here.