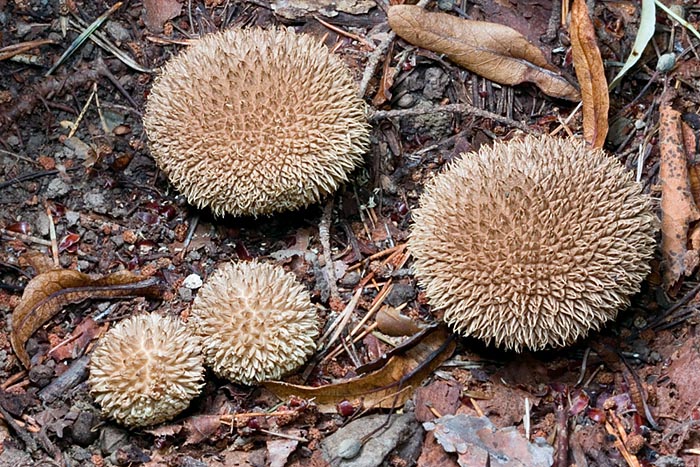 The name comes from the Greek “ekhînos” which means hedgehog, bristling with quills like the hedgehog.

This species, though not much utilized, has however its vulgar names: in Italy is “vescia spinosa”, “puzzola spinosa”; in France is “vesse-de-loup héris- son”; in Spain “pet de llop d’agullettes”, “cuesco de lobo”, “pedo de lobo”; in England is “spiny puffball” “spring puffball”; in Germany is “Igel-Stäubling”. 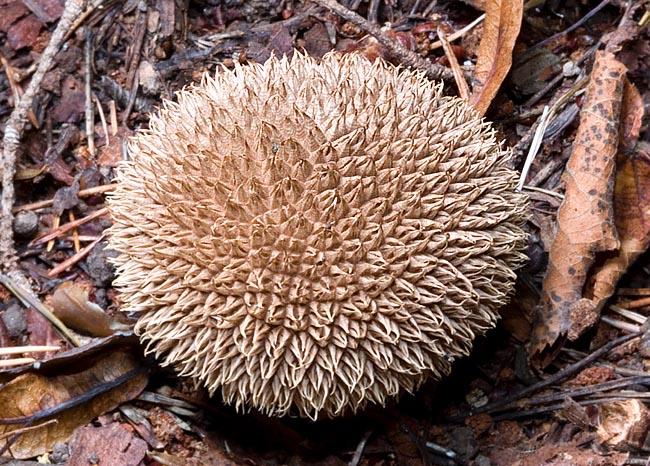 Easy to recognize due to the hedgehog look, is edible when young, quills removed © Giuseppe Mazza

Carpophore : 2-6 x 3-7 cm, globulous, pyrform, with short and conical stem; peridium covered by 3-5 cm long spines, initially grouped in pyramidal tufts then dividing in thinner groups; when old they detach and leave on the peridium a drawing formed by more or less regular small circles which, overall, form a sort of a reticulum; the spines are initially of hazel then dark brown coloured.

In the upper part of the carpophore, when ripe, an orifice opens from which get out the spores.

Gleba: represents the fertile part, tender, spongy, white to yellow-olive, then brown; the sub-gleba (sterile part), has a cream colour with brown shades.

When ripe, the gleba becomes pulverulent, due to the maturation of the spores which get out from an orifice opening at the apex of the peridium.

Habitat: it grows in summer and in autumn, isolated or gregarious, in broad leaf woods, mainly of beech, often in the layers of rotting leaves. 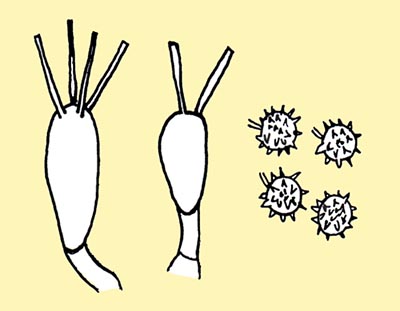 Edibility: Edible when young, when the gleba is white; it is necessary to remove the quills before for consuming it.

Remarks : it is a very easy to determine fungus, due to its look like a chestnut hedgehog with long quills.

→ To appreciate the biodiversity of MUSHROOMS and find other species, please click here.