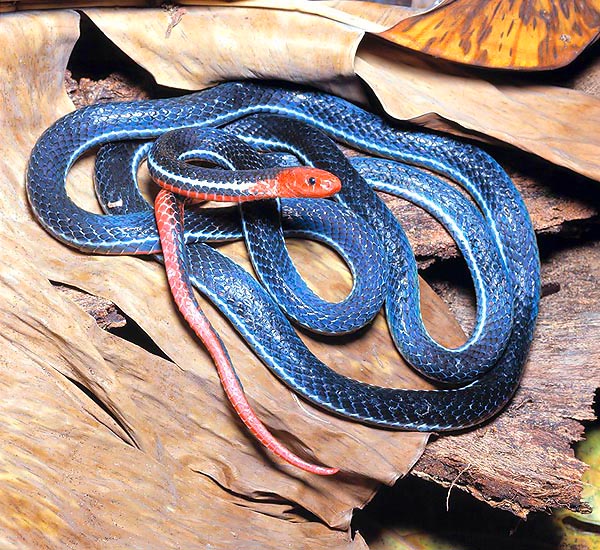 Maticora bivirgata flaviceps with an ampler distribution, as it is present in Thailand, Cambodia, Burma, Sumatra, Riau Archipelago, and western Malaysia up to Singapore.

This serpent, living in even thick forest zones, is of nocturnal habits, but it may be met also during the day; by this time it tends anyway to be less active. The average length, in the adult, is of 130-150 cm, with peaks of 180 cm; the body is quite thin, of a nice blue colour or indigo, often with thin lateral striae, the head, tail and ventral part are red. The head is somewhat short, with the muzzle ending in a blunt tip; the eyes are small and placed on the sides. The venom fangs, fixed and placed fore in the palate (proteroglyphous), are not long but equally effective and render potentially lethal the bite of these serpents.

The bright red colour of the head and the tail are, in all likelihood, and example of aposematic colouration, a combination of bright colours which intends to communicate to a possible aggressor: here I am, do you see me? I am dangerous!

A curious particular is this: usually, this type of camouflaging (which seemingly looks as the contrary of a camouflage), in the nocturnal species realizes the exhibition of the contrast white-black (typical example, the ratel Mellivora capensis, several species of polecats and skunks, equipped with “chemical weapons”, or, also, the hedgehog with its dangerous quills), whilst the bright colours are characteristic of diurnal animals, however, at the end of the story, it is matter of an only apparent anomaly, because, most probably, these nocturnal serpents are more vulnerable during the day and this would explain such characteristic (common, however, to the coral snakes of the New World). 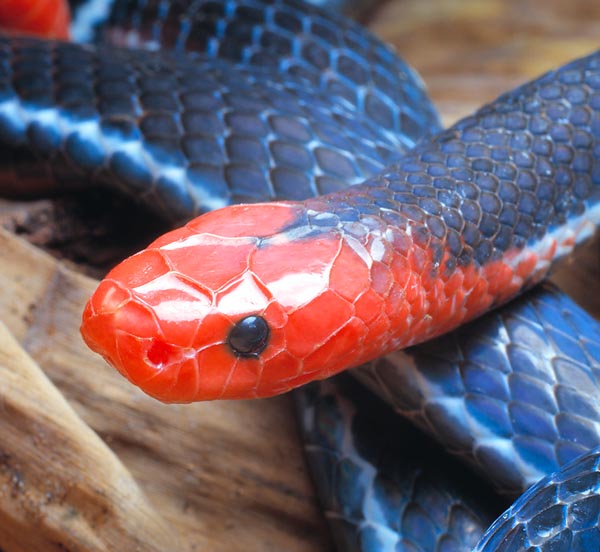 The bright red of head and tail means: here I am, do you see me? I’m dangerous © Giuseppe Mazza

At times, the maticoras hide the head under the spires, showing, on the contrary, the tail, probably hoping that it may be mistaken with the head.

These reptilians have a certain resemblance with the kraits; as look, especially with the Red-headed krait (Bungarus flaviceps), and as habits, they also mainly nourish of serpents, even venomous, not disdaining, however, different preys, such as birds, small mammals, lizards and even batrachians.
The venom is mostly neurotoxic and potentially lethal. As is the case of the kraits (Bungarus), it causes scarce symptoms at local level (unlike many Asian cobras, whose venom, even if neurotoxic, has an action which might trigger an oedema and/or a necrosis, depending on the species). They have isolated, however, also a cytotoxin and a phospholipase in the venom of these ophidians.

An interesting characteristic of behaviour, likely some species of Bungarus, is the rather scarce aggressiveness during the day hours, which seems, instead, to increase during the night, period when it is easier that the reptilian may bite those passing too close.

Are particularly at risk the local populations, often accustomed to walk, even by night, barefoot or with little or not at all protective footwear, so that, in spite of a mouth with a rather modest opening, some deadly cases imputable to this species have been reported and, in such cases, usually the demise seems to be caused by paralysis of the muscles charged of the respiration.