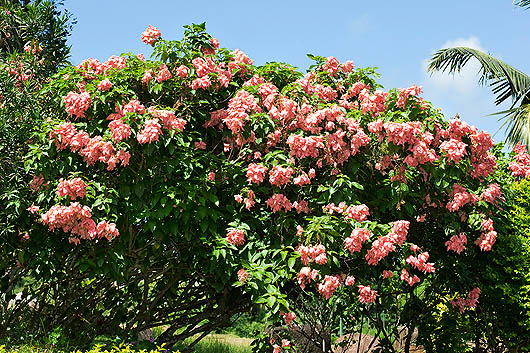 The Mussaenda erythrophylla is common in the tropical gardens © Giuseppe Mazza

The name of the genus comes from word in Sinhalese language “mussenda”, with which are called locally some plants belonging to the genus.

The name of the species is the combination of the Greek words “erythros” = red and “phyllon” = leaf, with reference to the colour of its showy sepals.

Bush or small semi-deciduous tree which, in the wild, can reach the 6-8 metres of height, whilst, when in cultivation, is not usually taller than 1-2 m, showing intense green ovate leaves, pubescent and strongly veined, 8-15 cm long. 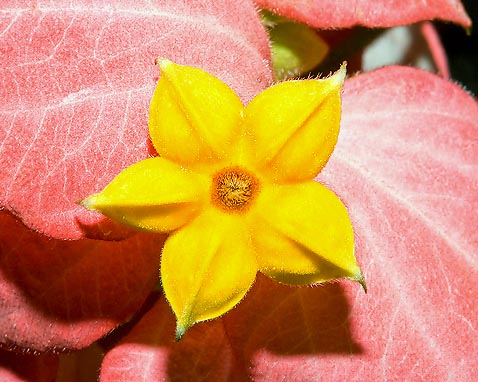 The inflorescences are terminal panicles with tubular flowers with white or cream-white corolla, with a diameter of 2 cm, and red centre, with one of the five lobes of the calyx expanding considerably, so much to reach dimensions (5-12 cm), slightly inferior than the leaves, of a red colour. The flowers are bisexual, but show the phenomenon of the heterostyly (difference in the length of the styles), that is to say that in some plants the flowers show a style longer than the anthers, in others, shorter and inside the corolla tube, which fosters the cross-fecundation. It usually reproduces by herbaceous or semi-woody cutting, and by air layering, as the plant seldom fructifies.

Amply spread plant and appreciated in the tropical and subtropical regions, it requires a full sun exposition and a high humidity of the habitat and of the substratum, which must be sandy, rich of humus and draining; it requires timely pruning in order to keep a compact appearance. Is to be cultivated in humid-wet greenhouse when outside from the tropical and subtropical areas.