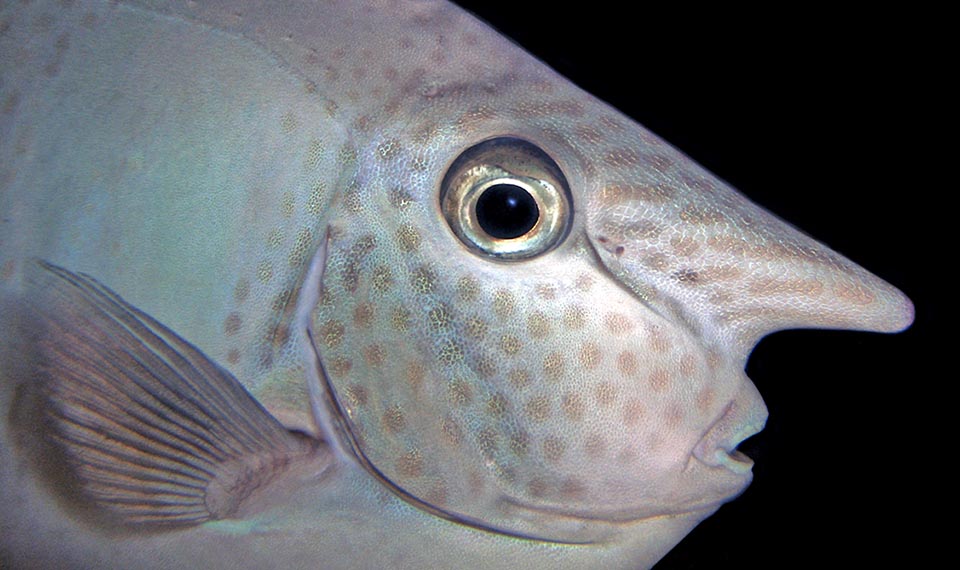 Naso brevirostris (Cuvier, 1829), vulgarly known as Spotted unicornfish, belongs to the class of the Actinopterygii, the ray-finned fishes, to the order of the Perciformes, to the family of the Acanthuridae and to the subfamily of the Nasinae, counting about twenty species, all attributed to the genus Naso, from the Latin “nasus”, that is, nose, due to its unusual protuberance on the snout.

In some instances, like Naso vlamingii, the name of the genus looks fully right; in others, like Naso lituratus, the bump is absent; whilst in Naso unicornis, more than a nose, it is a horn. The thing certainly did not go unnoticed, so much so that all these fishes are commonly called, all of them, Unicornfishes.

In our case, however, the specific epithet brevirostris does not refer to the horn, but to the unusual profile of the head that drops almost vertically. 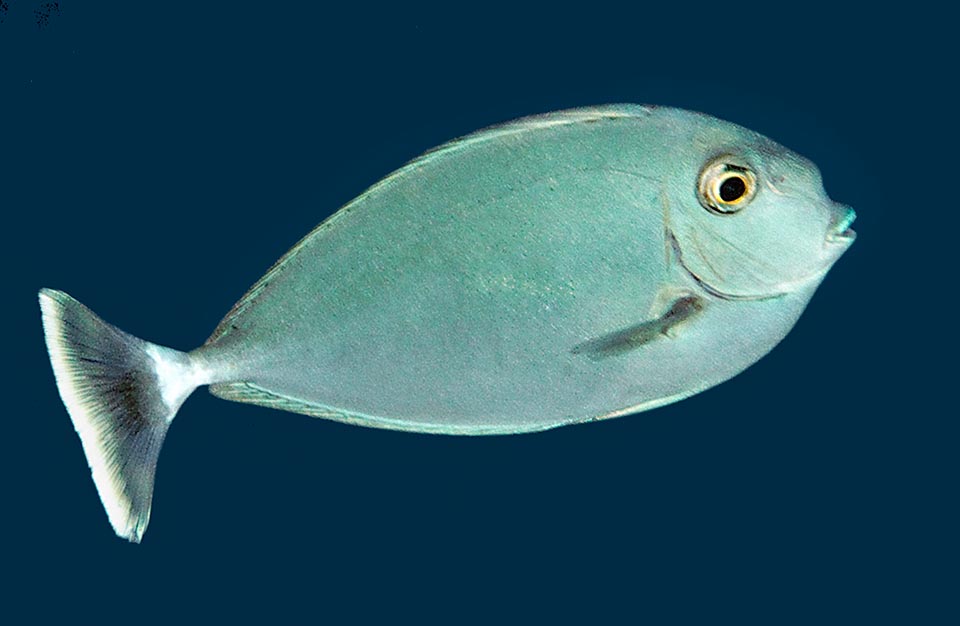 After the larval phase where they eat plankton, the young are vegetarian. They greeze algae, and the horn grows on from the 10 cm of length © Keoki Stender

It is therefore, in apparent contrast with the showy horn, of a fish with a “short snout”, and even more particularly interesting, because once reached a certain age, it obliges it to change diet.

At the beginning, in fact, this fish nourishes mainly of zooplankton; then, in youth, it becomes vegetarian and grows grazing algae. But when the horn reaches a certain size, it cannot graze them any more, because the snout is short and so it becomes aganin carnivorous, transforming in a greedy devourer of zooplankton.

Like many Nasinae, the Spotted unicornfish has a very vast distribution in the tropical Indo-Pacific. 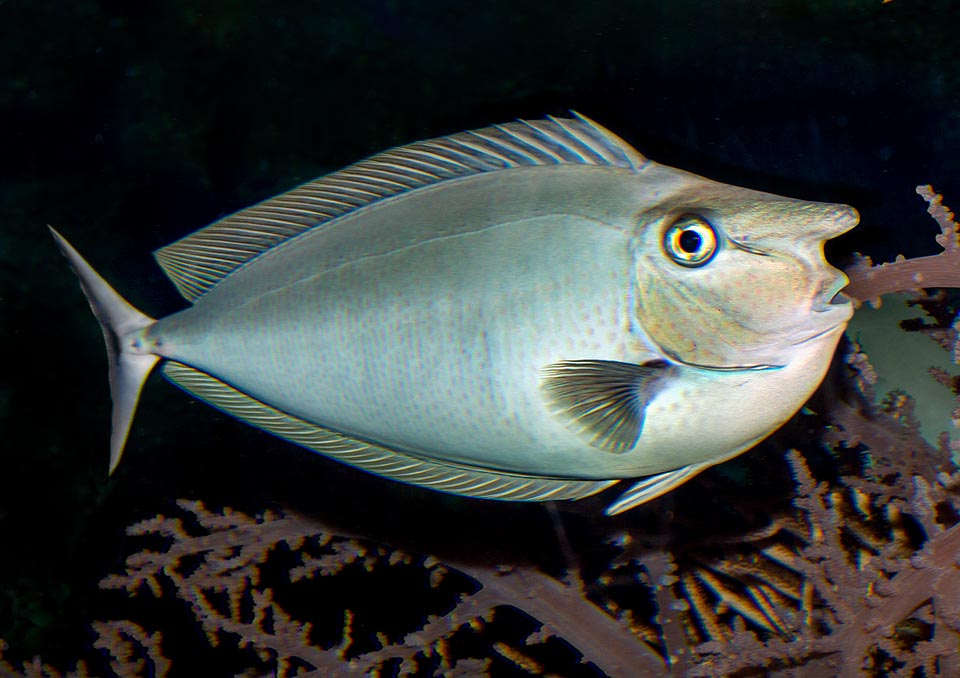 However, this species has short snout, and at some point, due to this bulky bump, the mouth is not able any more to catch the algae © Giuseppe Mazza

Indicatively, we find it from the Red Sea and the Gulf of Aden to South Africa, excluding the Gulf of Oman and the Persian Gulf.

It is present in the Madagascar waters, the Comoro Islands, Réunion, Mauritius, Seychelles and Maldives. Then, in India, Sri Lanka, Malaysia, Indonesia and northwards we find it along the coasts of Vietnam, the Philippines, Taiwan and Japan.

In Oceania, after Australia and Papua New Guinea, where it is very frequent, it reaches New Caledonia and Lord Howe Island that marks the southern limit of the species. Proceeding eastwards, it has co;onized the Fiji Islands, Tonga, Samoa, Cook Island, Hawaii, French Polynesia, Pitcairn and Easter islands, to reach, finally, in South America, the Galapagos Islands. 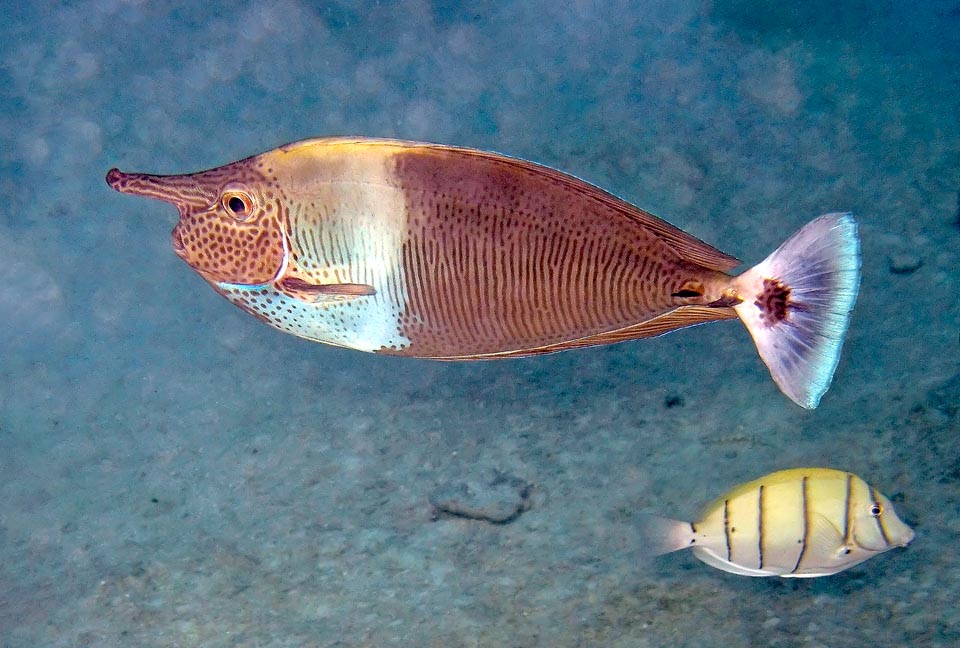 It’s a benthopelagic diurnal fish, associated with the madreporic formations. Usually, it goes swimming between the 4 and the 46 metres of depth, but it can be found also in 2 m of water and descends up to 122 m. The adults frequent the outer side of the reefs, where the strong currents are particularly rich in zooplankton.

Naso brevirostris can be 60 cm long, even if, usually, it is much shorter, but is already able to reproduce from the 25 cm of size.

The profile of the body is oval, with the characteristic bony protuberance that begins to grow when the fish exceeds the 10 cm. 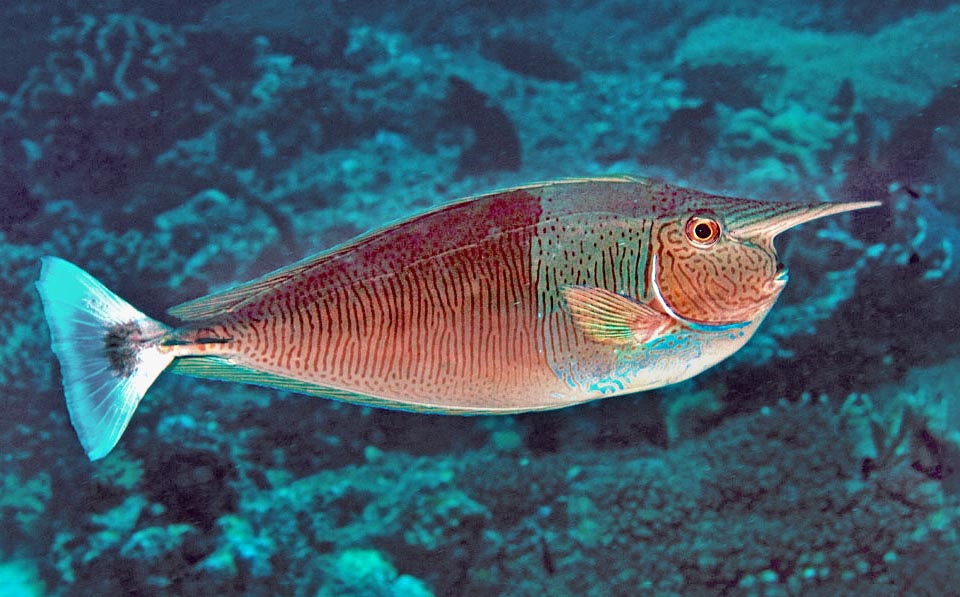 Then, they move on the outer side of the reefs, where the currents bring rivers of small crustaceans and plankton larvae. Unluckily, there also move predators, but the horn has become sharp and the tail has two pairs of hooked blades to whip intruders to blood. They have also a double mimetic livery that can break considerably the look of fish © Paddy Ryan

The caudal peduncle is narrow, and as normally occurs in the Unicornfishes, it has two hooked blades per side. Greater in the males, they are the only evident sexual dimorphism.

The mouth is small, protractile, with about 50 teeth per jaw. They have serrated tips for a better cutting, when young, the benthic algae. 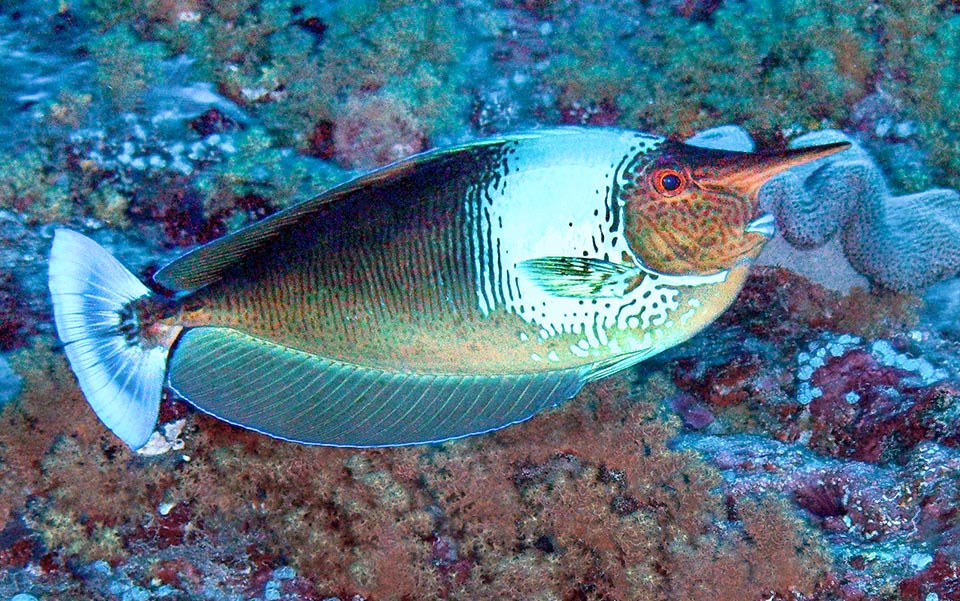 The background colour of the body goes from the olive grey to brown, at times tending to reddish, usually with dark brown vertical lines broken in a hatching that becomes punctiform on the back and towards the belly. Arabesques on the head and oblique parallel lines on the horn of the bigger specimens.

It often occurs that takes form, between the operculum and the first third of the body, a great faded belt, pale or with different background colour, sometimes also light blue. In fact, the livery depends, as often is the case in the Nasinae, on the mood of the fish. The vertical lines may reduce to a very pale drawing or to be completely absent. Only fixed point is the colour of the caudal fin, whitish with compact drawings forming a great dark spot towards the peduncle. 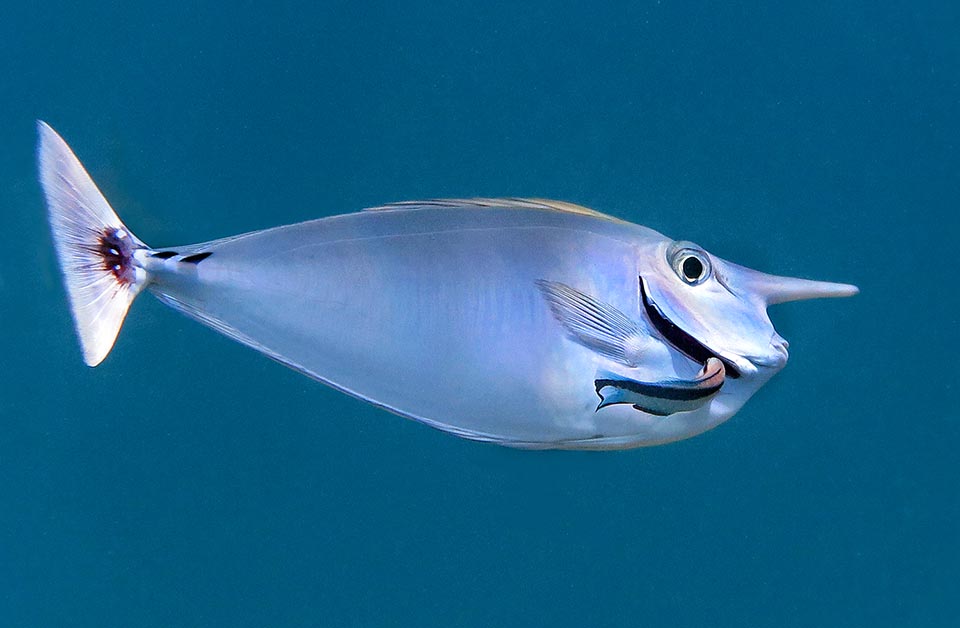 Completely relaxed specimen in a “cleaning station”, where the fishes go to get the ectoparasites removed. Here the surgeon on watch is a Labroides dimidiatus © Gianemilio Rusconi

Naso brevirostris lives in small groups, but can form even large schools with 500 individuals, in the locations where the food concentrates. Mating, however, is not collective and remains a matter of couples.

The eggs, fecundated while swimming, are entrusted to the currents. The larval stage lasts about three months, and the young in this way may often reach far away sites, thus colonizing new reefs as is shown by the enormous of the species.

The Spotted unicornfish is a times guest of the public aquaria, the only ones that can guarantee it, seen the feeding and the size, a decent life. 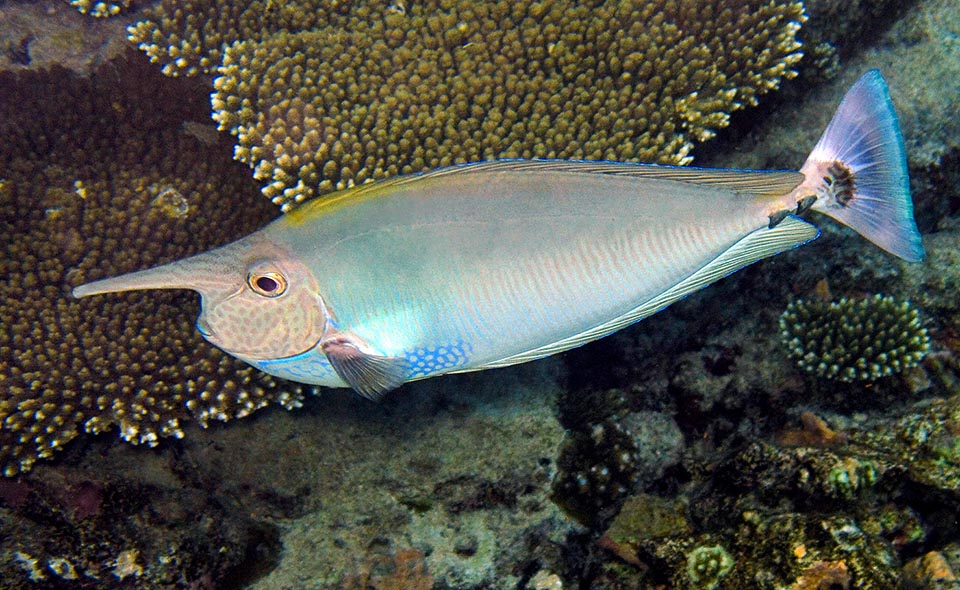 At times Naso brevirostris may get caught in the fishermen’s nets, and unluckily, depending on its feeding, to eat its flesh may reveal to even be risky. In fact, are not rare the cases of ciguatera, a food poisoning, even serious, without antidotes, with digestive, neurological and cardiovascular symptoms that can last long time © G. Rusconi

At times it gets caught into the fishermen’s nets. But, depending on its feeding, the consumption of its flesh may be risky. In fact, are not rare cases of ciguatera, a food poisoning with no antidotes, with digestive, neurological and cardiovascular symptoms that can last even two months.

The resilience of the species is average, seen that are necessary 1,4-4,4 years to redouble the populations decimated by the events, but the vulnerability index is for the moment (2020) not alarming, marking 33 on a scale of 100. This thanks to the very vast geographical distribution and its diet.