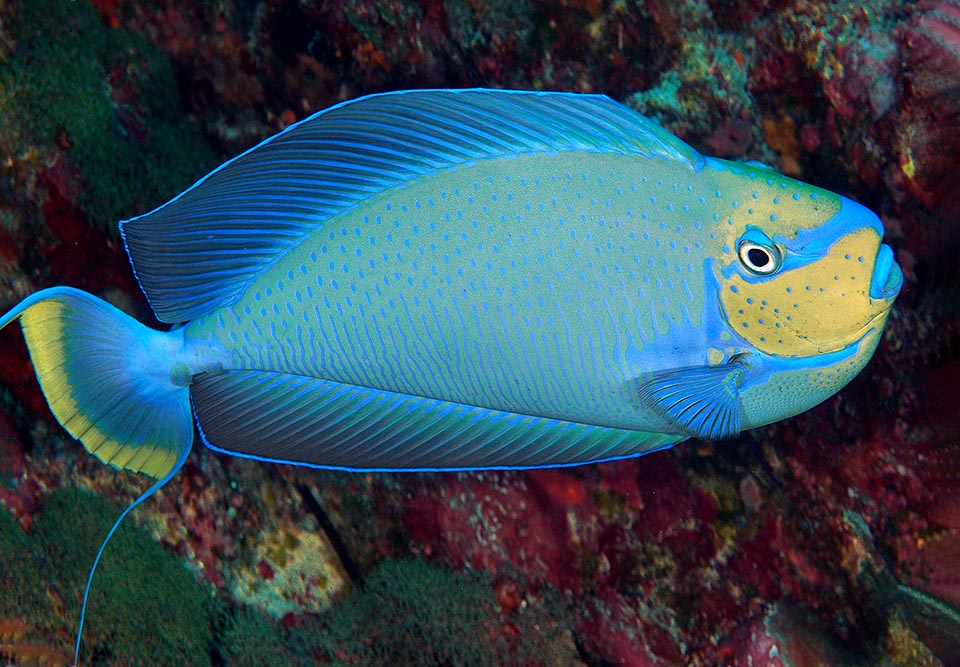 The Vlaming’s unicornfish (Naso vlamingii) has a very wide distribution in tropical Indo-Pacific waters. It can reach 60 cm of length, with sometimes a dazzling livery as in this spectacular image. The refined blue drawing can subside depending on the environment where it swims, the fish mood or its mimetic needs © Florent Charpin

The Naso vlamingii (Valenciennes, 1835), vulgarly known as Vlaming’s unicornfish belongs to the class of Actinopterygii, the ray-finned fishes, to the order of Perciformes, and to the family of Acanthuridae, that counts 6 genera and 84 species united in 3 subfamilies.

Among them, the biggest one is that of Acanthurinae, that includes the genus Acanthurus, the so-called surgeonfishes due to the sharp blade on the caudal peduncle, and the genera Ctenochaetus, Paracanthurus and Zebrasoma, frequent guests of the aquaria like Zebrasoma flavescens or Paracanthurus hepatus. The smallest subfamily is the one of Prionurinae, with only 7 species belonging to the genus Prionurus, whilst the Nasinae, also here with only one genus, the Naso, count a twenty of species known as the Unicornfishes because of the unusual bony protuberance on the snout, well evident  in  Naso unicornis. 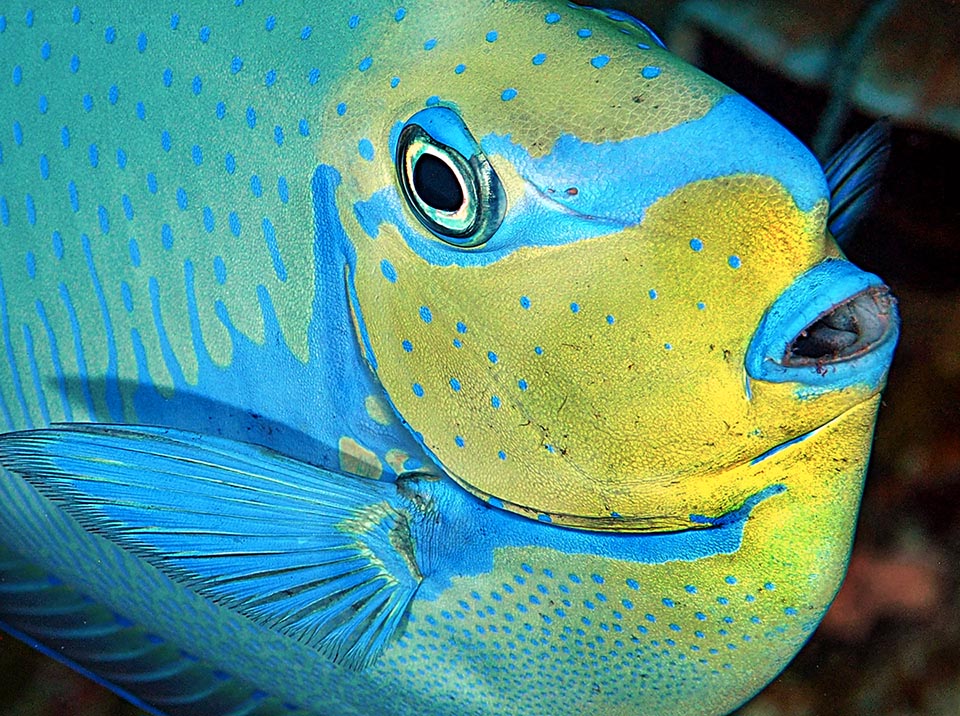 The yellow mustard colour of the head usually doesn’t change, where stand out in blue the lips and the typical front mask going to the eyes © Florent Charpin

This bump, however, may be absent, like in Naso lituratus, or just hinted, more like a nose than to a horn, as in Naso vlamingii.

Needless to say that the genus Naso comes from the Latin word “nasus” = nose, whilst the specific epithet  vlamingii, in Latin, literally of Vlaming, honours the memory of Willem Hesselsz de Vlamingh (1640-1698), Dutch sea master, who explored the central-western coast of Australia disembarking in the port of present Perth and christening Swan, that is swan, the river navigated by unusual black swans. He was the first European to see them and still now the river of the capital of Western Australia has this name.

Like other Nasinae, the Vlaming’s unicornfish has a very vast distribution in the tropical Indo-Pacific waters. 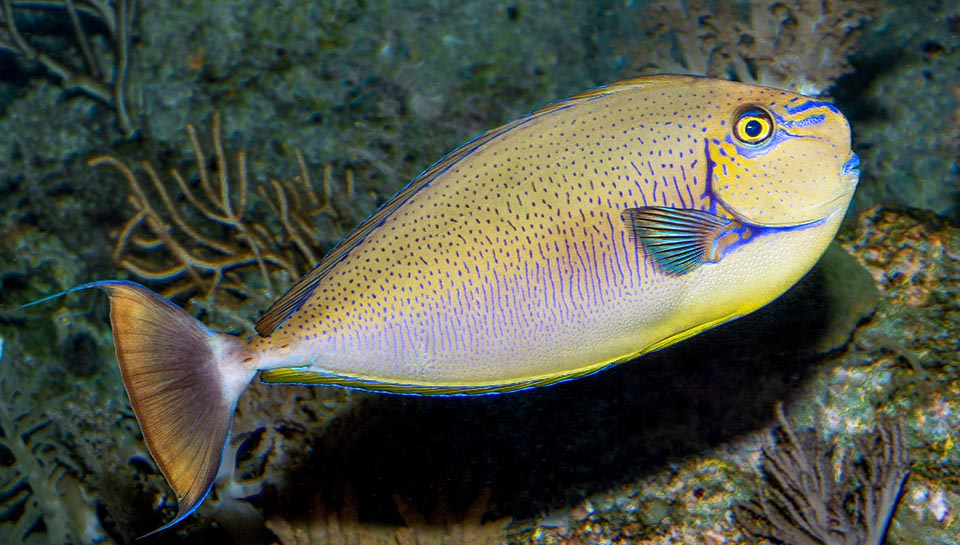 More than a real horn, these fishes have a bony bulge similar to a nose. The bluish dotting of the body joins in hatches towards the belly © Giuseppe Mazza

Indicatively, starting from Somalia, we find it along the African coast up to South Africa, in Madagascar and in the Comoro Islands, Réunion, Mauritius, Seychelles and Maldives. It is present also along the coasts of India, Malaysia, Indonesia and then, northwards, in Vietnam, Philippines, Taiwan and Japan. In Oceania, after Australia and Papua New Guinea, reaches New Caledonia. Proceeding eastwards, it has colonized the Fiji Islands, Tonga, Samoa, Cook Islands, Hawaii, French Polynesia, and it has even reached, now in South America, the Galapagos.

It is a diurnal fish, associated with the madreporic formations, who goes swimming in shallow waters and never goes down under 50 m. It is often found in the lagoons, but also in the outer side of the reefs, in the sites where concentrate the zooplankton carried by the currents. 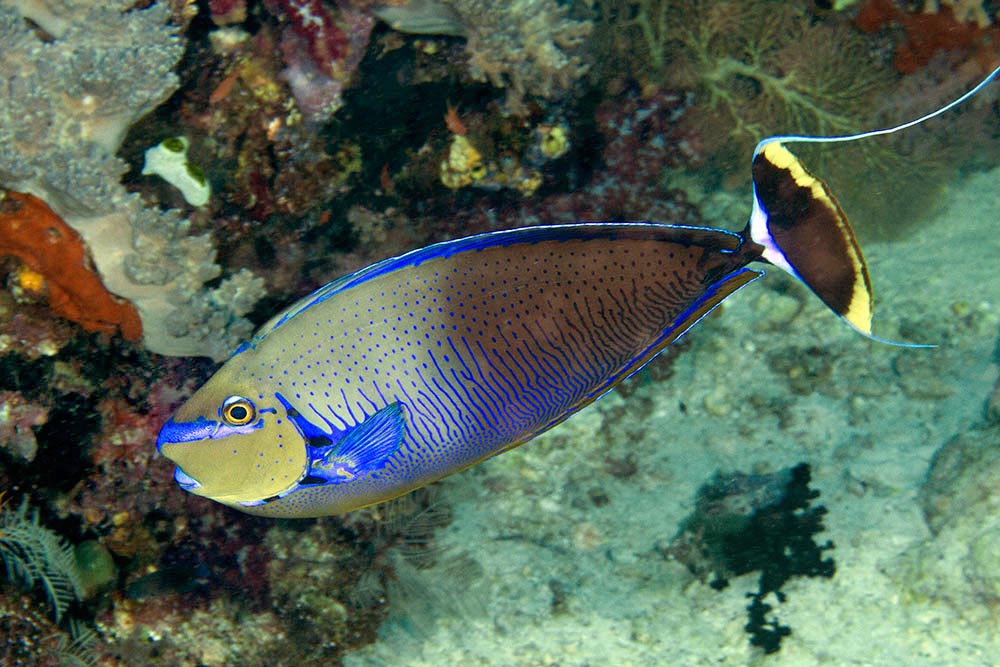 Naso vlamingii can reach the length of 60 cm. The profile of the body is oval, with the characteristic bony protuberance, over the mouth, decorated with an elegant blue small mask that reaches the eyes.

The caudal peduncle is narrow, and like in the other Unicornfishes, it has two hooked blades per side. They are of modest size, surely not comparable to the showy ones of Naso elegans or of Naso unicornis.

The mouth is small, with blue lips and conical teeth with blunt or serrated tips for better cutting the algae belonging to its diet. 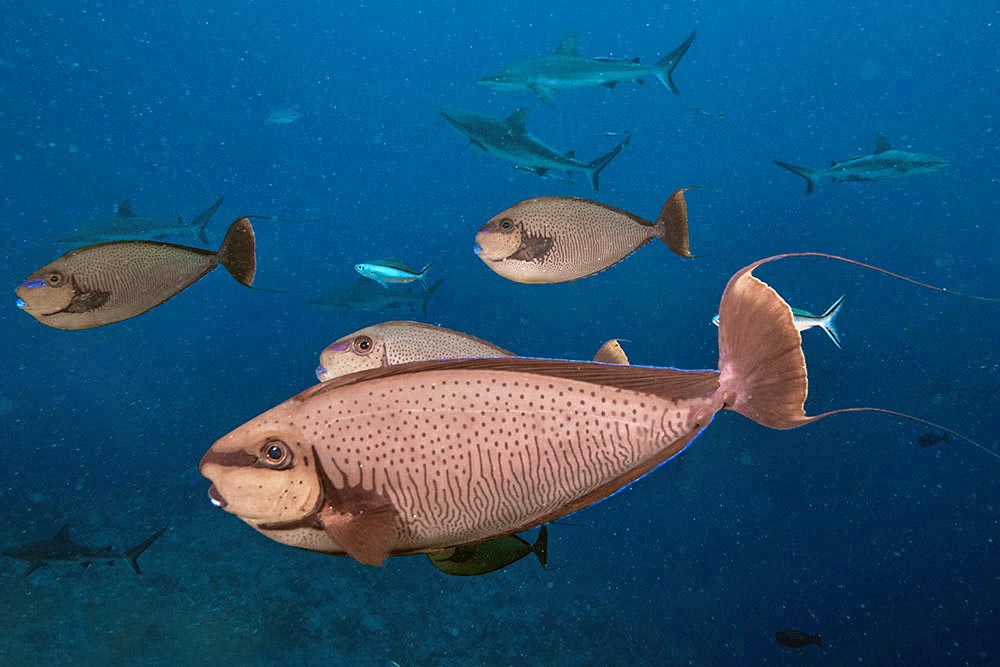 The Vlaming’s unicornfish lives alone, in couple or in small schools. In the foreground majestic male are visible the two cutting hooked blades of the caudal peduncle © Paddy Ryan

The pectoral fines are usually blue with 17-19 soft rays, whilst the pelvic, yellow and pointed, has one spiny ray and 9 unarmed ones.

The caudal fin is bluish, roughly trapezoid, with yellow margin often slightly rounded and blue filamentous lobes, that in the males grow out of all proportion with the age, displaying, together with the most developed caudal blades, as minor sexual dimorphism. 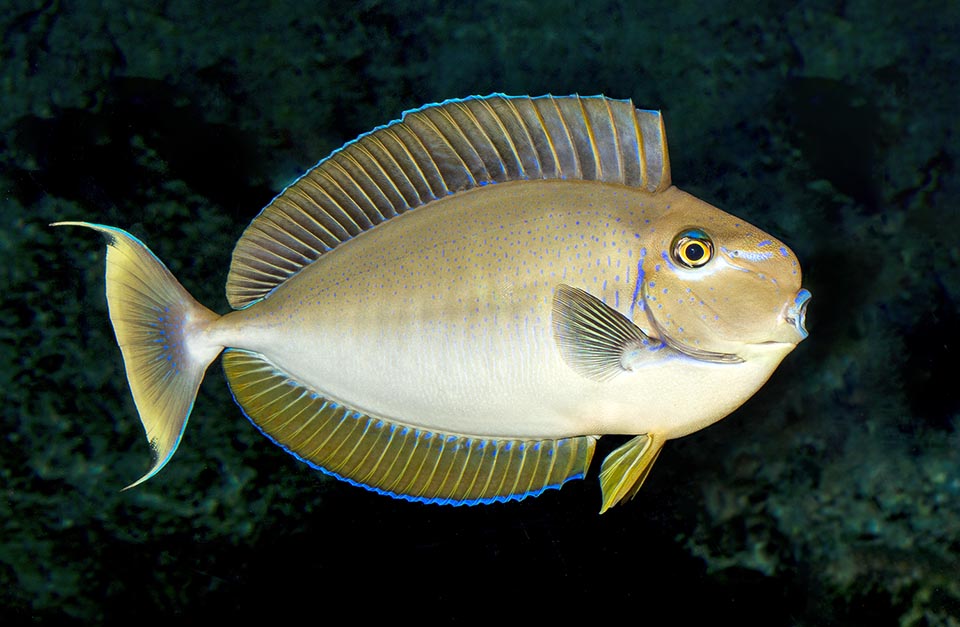 It also seems that the males have chromatophores more efficient than those of the females to quickly adapt to the environment and especially, to manifest their state of mind with dazzling liveries.

Head apart, of mustard colour with blue dots, the background colour of the body can in fact vary from yellowish reddish to pale blue, with a blue dotting that merges forming hatchings towards the belly. In this way, originates a characteristic drawing that however may subside in an instant, to almost disappear, masked in the night by a mimetic livery rich in light and dark hues.

The young have a roundish profile, of brown mustard colour with scattered dark spots that, while growing, gradually turn blue. 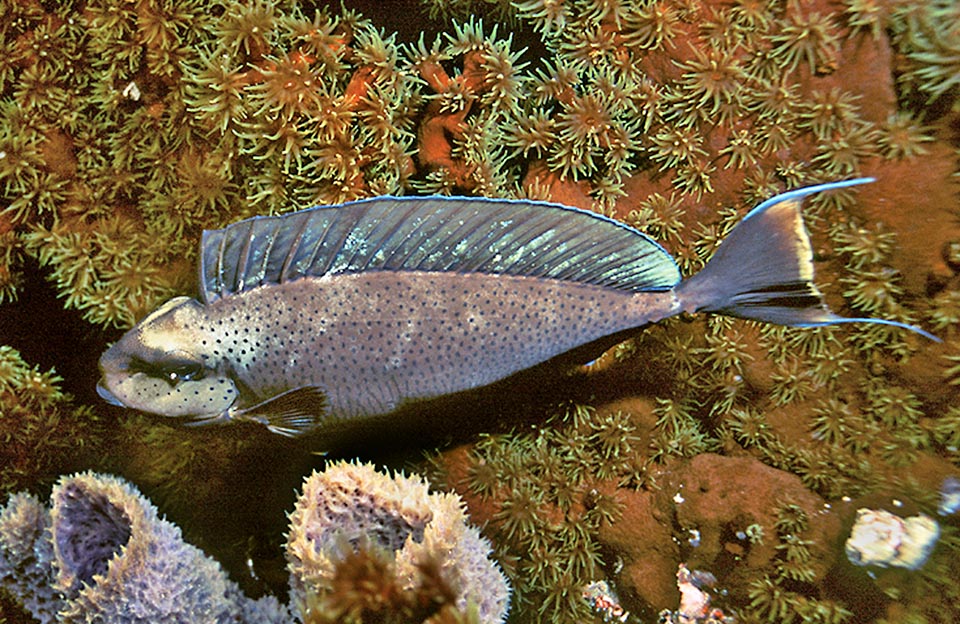 The Vlaming’s unicornfish lives isolated, in couples or in small groups, nourishing mainly of zooplankton as well as of algae, of the genera Cladophora, Dictyota, Padina, Turbinaria Jania, and Laurencia, and of the organic debris depositing on the seabeds.

It is therefore an omnivore, less attracted than the congeners, by a vegetarian diet.

The eggs, fecundated while swimming, are entrusted to the currents. The larval phase lasts a long time, with the young consequently growing in often far locations, colonizing new reefs as is shown by the huge diffusion of the species. 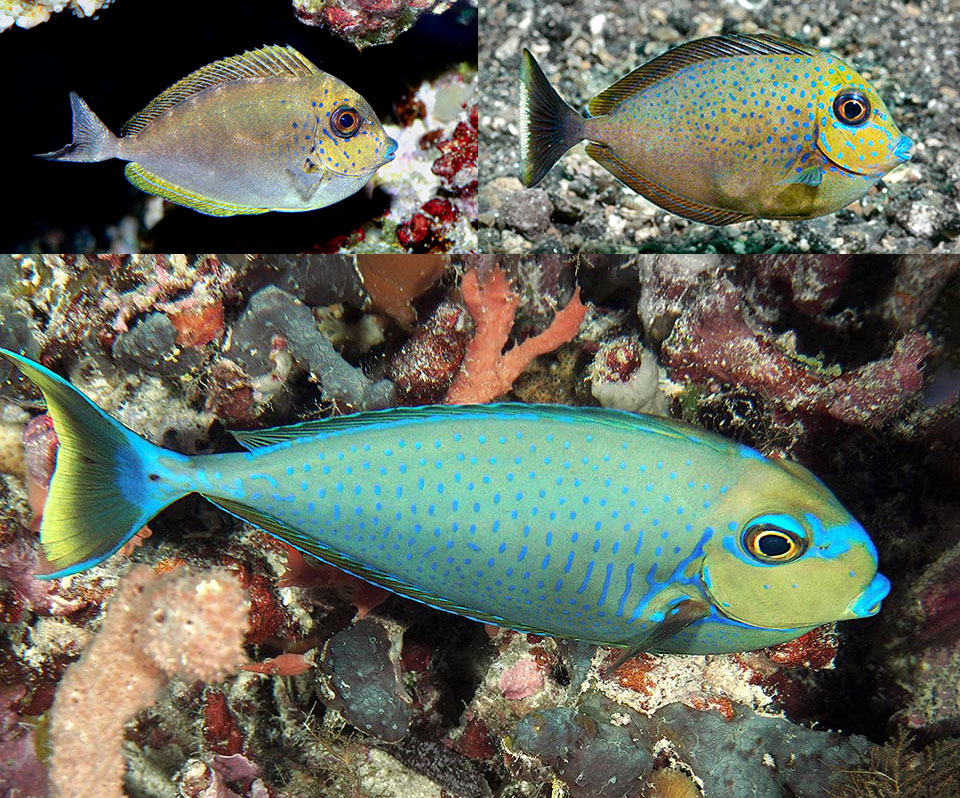 Naso vlamingii is often a guest of the large public aquaria, the only ones that can ensure it, seen its feeding and size, a decent life.

The resilience of the species is low, as 4,5-14 years are required for renovating the populations decimated by the events, but the vulnerability index at the moment, in (2020), is not alarming, marking 38 on a scale of 100. This thanks to its enormous distribution area and its inexhaustible sources of food.