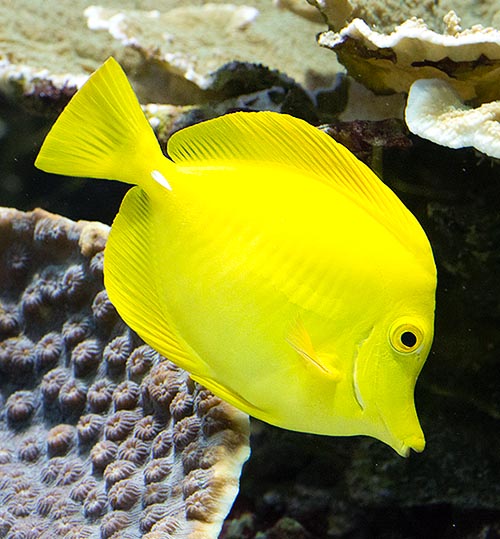 Zebrasoma flavescens is at home in the Pacific, from Indonesia to Hawaii © G. Mazza

The Yellow tang (Zebrasoma flavescens Bennett, 1828) belongs to the class of Actinopterygii, the ray-finned fishes, to the order of Perciformes and to the famly of Acanthuridae.

The name of the genus “zebrasoma”, comes from “zebra” = zebra, the well known African equine, and from the Greek “soma” = body, that is, it is an animal “with the zebra-shaped body”, du to the bands unusually vertical in a surgeonfish, even if in this species they are practically invisible. But, due to the sail-shaped dorsal and the concave profile between the eye and the snout it has been rightly related to the Zebrasoma desjardinii.

The name of the species “flavescens” comes from the Latin “flavus” = yellow, and, therefore, “tending to the yellow”.

The yellow tang is present in the tropical waters of the Asian Pacific, from Indonesia and the north of Australia up to the Philippines, Taiwan, Micronesia and the Hawaii. It has been introduced, recently, in Florida.

It lives in the madreporic formations, usually between 1 and 46 m of depth, but following the rocks covered by seaweeds, it may go down even lower, up to about the 80 metres.

It can reach the 20 cm, but the normal size is of about 14 cm. The body is flat, more or less oval or roundish when the fins are spread. The dorsal has 5 spiny rays and 23-26 soft rays; the anal, 3 spiny rays and 19-22 unarmed; the ventral ones have a very modest size; the pectoral count 19-22 soft rays; the caudal is truncated. The caudal peduncle shows the cutting blade typical of the surgeonfishes, evidenced on both sides by the white lips of the groove lodging them. It is poisonous only in the juveniles. The mouth has tiny teeth with denticulate margins: 18 above and 22 below, built for a diet based on the seaweeds, especially filamentous. 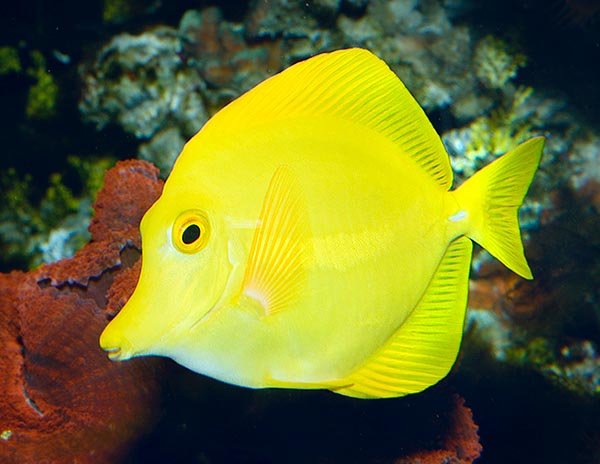 The colour is a nice bright yellow, but it can vary depending on the zones with more or less warm shades. Often on the sides we can observe a slightly paler or brighter band.

The yellow tang swims all the day round looking for small seaweeds, without ignoring the debris, pellicle of diatoms and of blue-green seaweeds covering the sunny bottoms, and the small invertebrates it finds among the madreporic interstices. It can be also seen while caring, in group, the Green turtles (Chelonia mydas) which it cleans from the seaweeds and parasites. The reproduction may take place around the whole year with pelagic eggs, during the full moon nights. Usually it is collective, but can also be done in pair of with a male having more females. In fact, they often own a territory with their small harem.

It is one of the most requested fishes for the aquaria market, also because it adapts better than other acanthurids to the life in captivity: it is less aggressive, easier to nourish and resistant to diseases.

The unbelievable trade of the Zebrasoma flavescens forms almost half of the marine fishes intended for export. Apart from the moral considerations, if we think that a young yellow tang weighs 60 g only and that therefore the biomass taken is negligible if compared to the species meant for the alimentation, we cannot surely say that it is an endangered animal: the populations can double in only 15 months and the vulnerability of the species is today esteemed to be 35 per 100, against, for instance, the dramatic 82 per 100 of the Bluefin tuna (Thunnus thynnus).