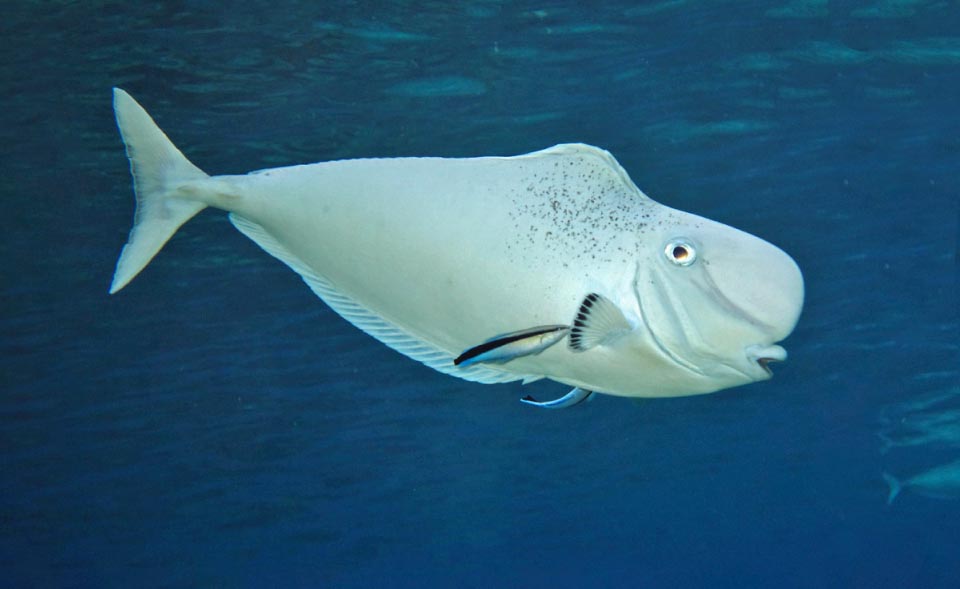 Even if it gets the name from Tonga Island, Naso tonganus is present in most of tropical Indo-Pacific © Lyle Vail

Naso tonganus (Valenciennes, 1835) belongs to the class of the Actinopterygii, the ray-finned fishes, to the order of the Perciformes, to the family of the Acanthuridae and to the subfamily of the Nasinae, regrouping about twenty species all assigned to the genus Naso, from the Latin “nasus” = nose, due to the showy bony protuberance, like a nose or a horn, hence the vulgar name assigned to all Unicorn fishes.

The specific term tonganus, in Latin “of Tonga”, refers to Tonga Island, in the southern Pacific, where this fish is present.

The range of the species is much vaster, with distribution covering most of tropical Indo-Pacific.

Indicatively, we find it in Tanzania and in South Africa. It is present in the waters of Madagascar and in the adjacent islands, Comoros, Réunion, Seychelles, Chagos and Maldives, in India and in Sri Lanka, then in Christmas Island, Malaysia, Indonesia and further north along the Philippines coasts, Taiwan and Japan, even if here the sightings are rare and usually concern stray specimens, that have followed the schools of other Acanthuridae. In Oceania, after Australia and Papua New Guinea, it reaches New Caledonia. Going eastwards, it has colonized Micronesia and, of course, Tonga. Finally, we find it also in Samoa and the Cook Islands, which mark the eastern limit of the species. 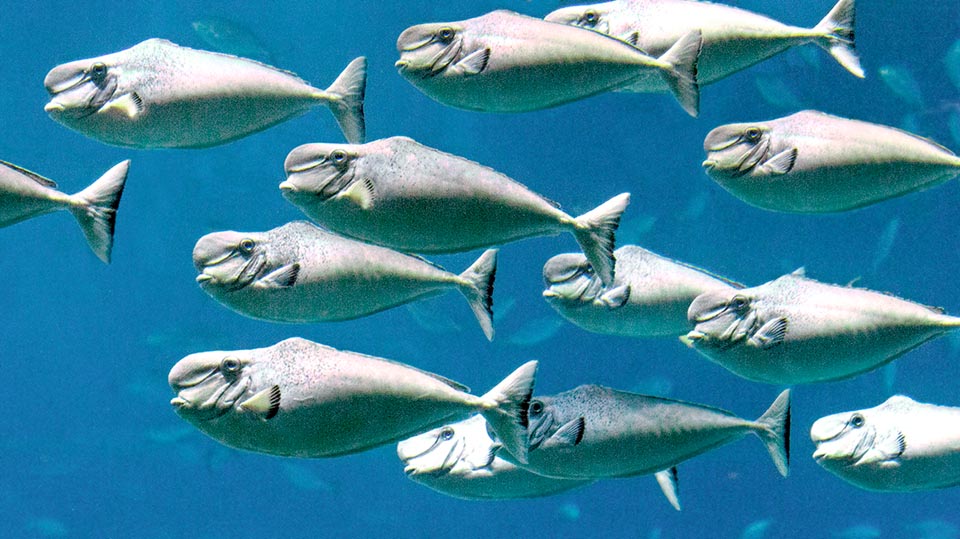 In schools at times, it’s a pacific herbivore that can reach the 60 cm of length, grazing any sort of algae © Giuseppe Mazza

It is a diurnal herbivorous benthopelagic fish, associated with the corals formations, swimming usually between 2 and 40 m of depth. It cleans up the madrepores from the infesting filamentous algae and spends most of the day grazing the most consistent ones, green or red, growing on the rocks. It finds them abundantly in the sunny lagoons and the estuaries, but often grazes in small schools also on the outer side of the reefs.

Naso tonganus can reach the length of 60 cm. The profile of the body is oval and the great bony bump over the fleshy lips is much more pronounced than in Naso vlamingii. Then, there is a second showy hump on the back just after the head. The caudal peduncle is narrow with two hooked blades per side. Bigger in the males, they are the only evident sexual dimorphism.

The background colour of the body, that remarkably weakens on the side in the lower half of the fish, is silver grey, tending to yellowish on the abdomen. The zone around the hump presents a fine black dotting and the head has two oblique dark bands. The first, that for far may give the idea of a huge mouth, goes from the upper lip to the eye, whilst the other is parallel to the branchial opening. 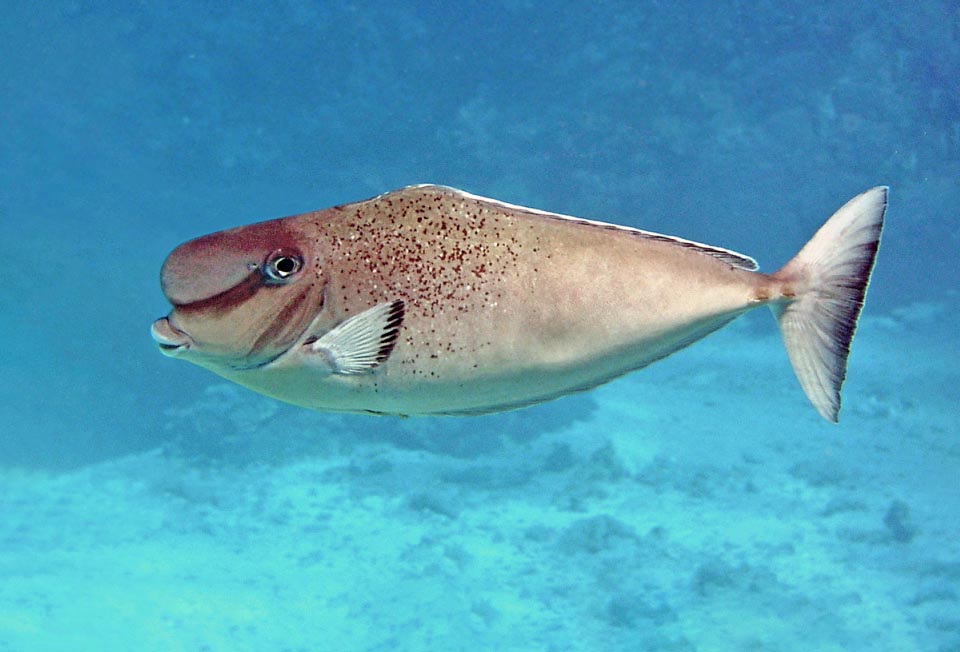 Showy bumps near the eyes and on the back. It differs from Naso tuberosus because of the small spots present only around the hump and the black margin of the pectorals © Reef EcoImages, Andy Lewis

Naso tonganus is at times mistaken with Naso tuberosus.It also displays two humps and is at first sight quite similar. It distinguishes for the nasal protuberance, shorter, that hardly reaches the profile of the upper lip, and for the tiny black spots on the back, that are bigger, present on the whole upper part of the fish and the whole caudal fin. Moreover, is absent the typical black stripe of Naso tonganus at the edge of the pectoral fins,replaced by a dark spot on the chest between these and the operculum.

Naso tonganus usually lives solitary or small groups. The mating, however, is not collective, but is a mere matter of couples. The eggs, fecundated while swimming, are entrusted to the currents. The larval stage lasts a long time and the young in this way often colonize far away sites. They have a roundish profile and are protected all over the body by a dense mimetic black spotting.

The resilience of the species is mediocre, seen that are necessary 1,4-4,4 years for forming again the populations decimated by the vents, and nowadays (2020) the vulnerability index is already relatively high, marking 52 on a scale of 100.