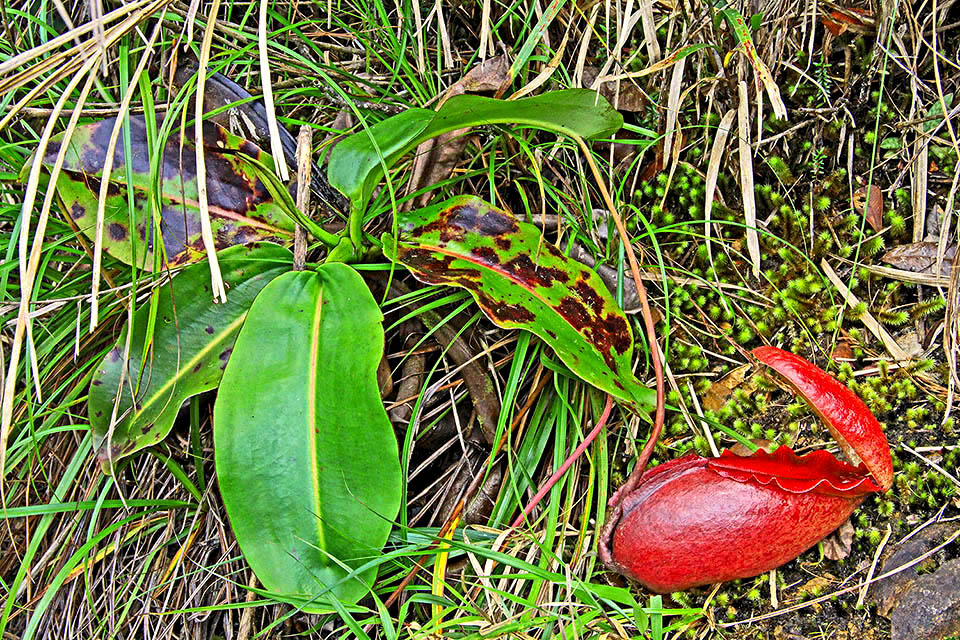 Nepenthes rajah Hook. f. è (1859) is a carnivorous plant of the family Nepenthaceae living in the island of Borneo in South-East Asia, in a very restricted area limited to the Mount Kinabalu (4.101 m) and the Mount Tambuyukon (2.579 m), in the Malaysian State of Sabah. The geology and the climate of these mountains have originated several endemic species, in particular carnivorous plants and orchids. For the protection of this remarkable biodiversity, in 1964, the Kinabalu National Park covering an area of 754 square kilometres was created.

Nepenthes rajah is a mountain species growing on open and humid spaces, in musky forests, on ridges or landslides, on ultramafic soils, between 1500 and 2650 m. 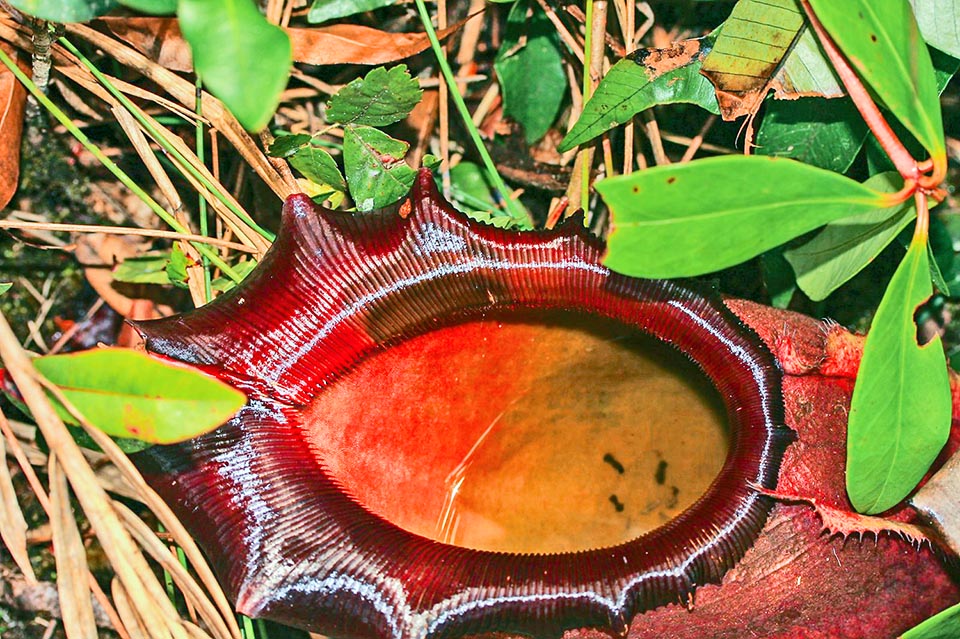 Particular of an inferior ascidium with small preys in the digestive liquid. It can reach 40 cm with a capacity of 2 litres © Tom Ballinger

This plant was collected for the first time in 1858 by Sir Hugh Low (1824-1905) on the Mount Kinabalu and described on the following year by Joseph Dalton Hooker (1817-1911) in “The Transactions of the Linnean Society of London” volume XXII.

By Hooker will it was dedicated to the British adventurer Sir James Brooke (1803-1868) to whom the sultan of Brunei, Omar Ali Sifuddin II (1828-1852), thanks to his merits in the fight against piracy and in the repression of a riot, granted him a vast territory in the north-western part of the island of Borneo, and thus he became the first White Rajah of the kingdom of Sarawak. 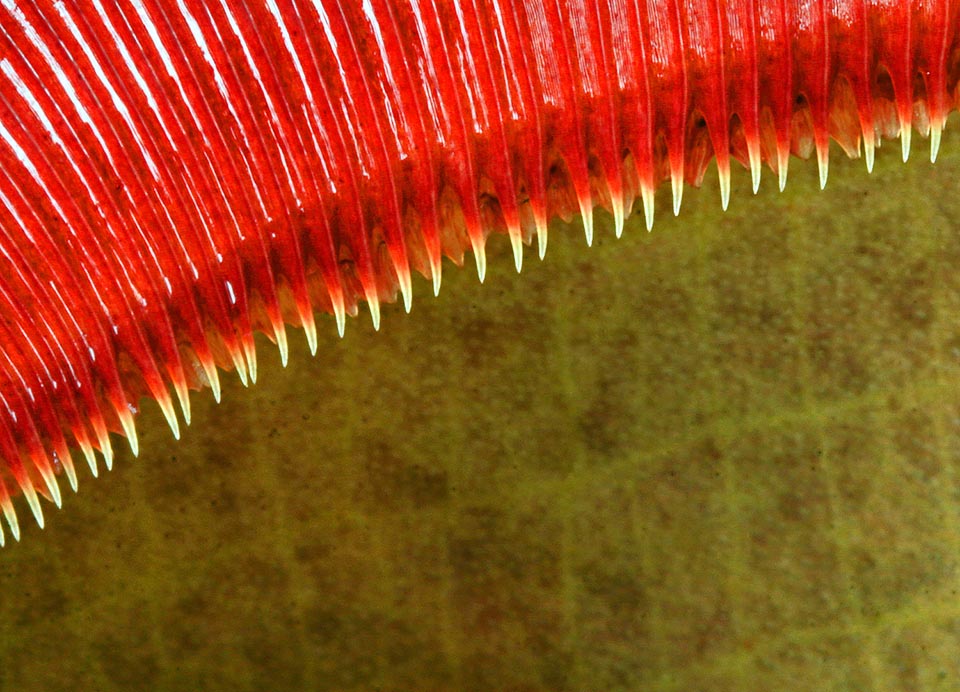 The specific epithet rajah rightly means, in Malay, “king” and thanks to the big dimensions of the ascidia, this plant was locally called “King of Nepenthes”, but also “Giant Malaysian Pitcher plant” or, simply, “Giant Pitcher”.

Nepenthes rajah is a plant with a stem growing along the soil and tending to climb up on other plants to reach the 6 m of length, even if normally it does not exceed the 3 m. Its diametre varies from 15 to 30 mm.

The young plants are covered with white hairs whilst the mature plants are generally devoid of them. 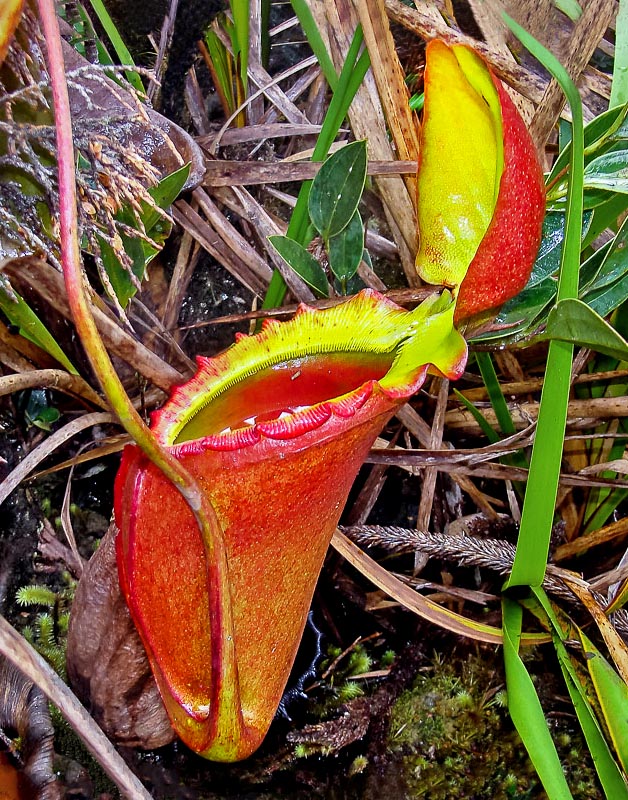 A superior ascidium. It is much smaller and can grow even at several metres from the soil as the plant climbs up to 6 m. Here the preys are chiefly ants, whilst those below trap also vertebrates such a frogs, lizards and birds © Vincent Bazile

Nepenthes rajah does not produce stolons, like some other species of the genus, but the oldest plants more often form basal ramifications.

The leaves are produced at regular intervals along the stem and have petioles that sheath the stem. They reach big dimensions and have a coriaceous consistency with a wavy outer margin. The tendrils are inserted at about 5 cm under the foliar apex and may reach 50 cm. This characteristic is more marked in Nepenthes rajah than in other species of Nepenthes, excluding Nepenthes clipeata. The lamina varies from oblong to lanceolate, up to 80 cm long and up to 15 cm broad. The petiole is canaliculate, winged, up to 15 cm long, less than 1 cm thick, enlarged at the base, with a sheath wrapping the stem per 3/4 of the circumference.

The ascidia are urceolate, 20-41 cm tall and 11-20 cm broad, with an up to  2 litres capacity. Their outer colour varies from red to violet whilst inside they are usually of lime-green colour, violet at times. The two wings are fringed and extend from the base of the ascidium upt to the opening and may be 6 to 25 mm broad. The glandular area (about 300-800 glands per square centimetre) extends over the whole inner surface of the ascidium. The opening can be horizontal or oblique.

The peristome is greatly expanded, scalloped, extended on the internal side in a perpendicular, 10-20 mm broad, lamina. The ribs are 0,5-1 mm apart on the inner part, 1-2 mm on the outer margin. The teeth are evident, those of the inner margin from 2 to 4 times longer than wide. The cover, bigger than the opening, varies from ovate to oblong, rounded at the apex, cordate at the base. Its lower surface is covered by many prominent glands. The spur is up to 20 mm long, not ramified. The upper ascidia are less numerous, smaller, conical in shape, of pale, usually yellow, colour, with wings reduced to ribs.

Like all species of Nepenthes, Nepenthes rajah is dioecious, that is, each plant produces either only male flowers or only female flowers. They emit tempting and sugary fragrances that attract the insects. The male flowers have elliptic to oblong, up to 8 mm long tepals with stamens with the filaments merged in a (3-4 mm) column and anthers spirally arranged. The female flowers have tepals narrowers than the male ones. The ovary is superior. 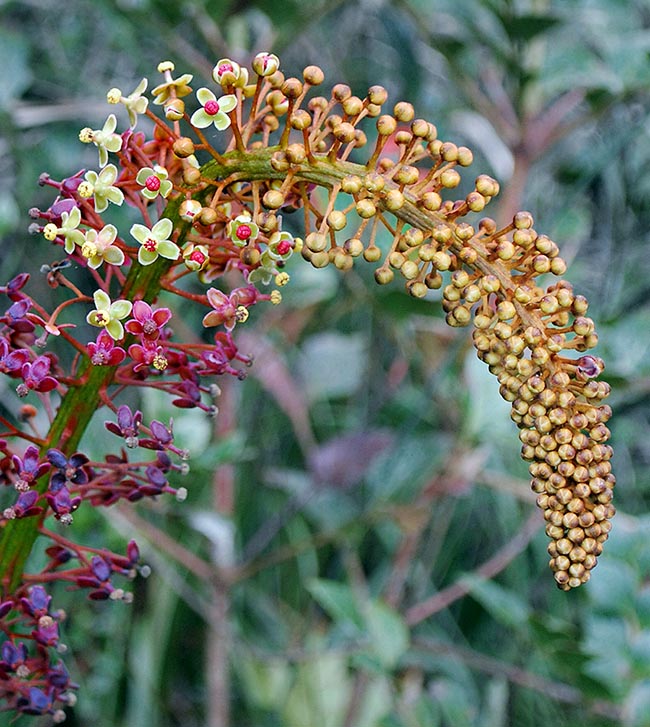 Male inflorescence, even 80-120 cm long, curved due to the weight of flowers © Martin Guenther

The male inflorescences have an up to 80 cm, at times up to 120 cm, long cylindrical rachis, often 10 mm at the base and about 7 mm on the summit. The portion without flowers varies from 20 to 40 cm and the flowers, without bracts, are regular, of colour varying from yellow-green to orange, borne by bifid peduncles, the lower ones, with two flowers, 20-25 mm long and uniflorous, the upper ones gradually shorter. The female inflorescence is usually similar to the male one, but the tepals are rather narrower. The fruit-bearing raceme is formed by rather turgid capsules, 10 to 20 mm long, of orange-brown colour, densely covered by tomentum of rust colour.

The seeds are 3-8 mm long and filiform.

The ascidia of Nepenthes rajah are regularly visited by two species of mammals: the Mountain treeshrew (Tupaia montana Thomas, 1892) and the Summit rat (Rattus baluensis Thomas, 1894). Both feed of the nectar produced by the glands present in the covers and in the meantime defecate inside the ascidium.

Nepenthes rajah is also able to trap small vertebrates such as frogs, lizards and even birds, although these do not represent the norm. Insects, in particular ants, are the most diffused prey by the inferior ascidia as well as in the upper or aerial ones.

The ascidia host also a great number of other, very specialized, organisms, called nepentebiont, that cannot survive in any other part, but bring mutual benefit.

Usually they are larvae of mosquito and bacteria (infauna) that receive domicile, protection and food from the plant, whilst, in exchange, they help in destroying the preys and in facilitating the digestion.

Male inflorescence, even 80-120 cm long, curved due to the weight of flowers © Martin Guenther 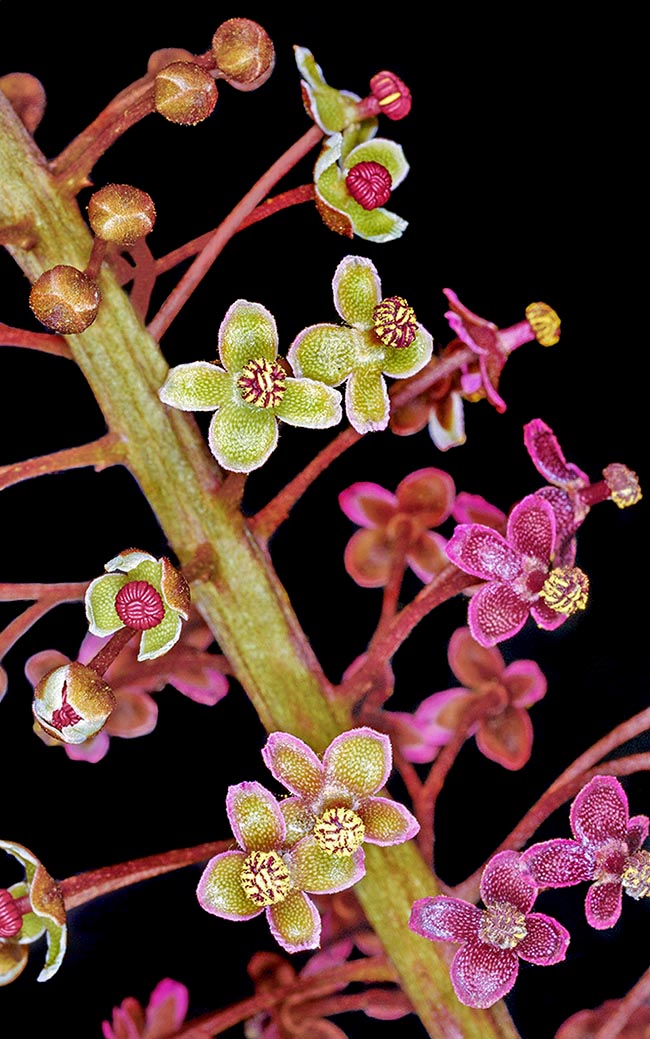 The male flowers, with the stamen’s filaments merged in column and spirally arranged anthers, have four up to 8 mm long tepals. Initially they are yellow greenish, then orange, over time take various shades of red © Eric Hunt

Like Nepenthes aristolochioides, Nepenthes khasiana and others, Nepenthes rajah is a species classified at high risk of extinction in the IUCN Red List of the Endangered species (EN). It is also reported in the Table I, Part II of the Wildlife Conservation Enactment (1997) and in the Appendix I of CITES which prohibits the trade of plants collected in nature.

However, because of its popularity among the collectors, many plants have been removed unlawfully from their natural environment, even if its distribution falls entirely within the boundaries of the Kinabalu Park. This indiscriminate collection, done mainly in the 70’s of the last century, has led to the remarkable reduction of some populations and consequently the species has been included in the CITES Appendix I in 1981, together with Nepenthes khasiana Hook.f.

In any case, the unlawful collection is not the only threat for this plant. The climatic phenomenon El Niño  of 1997/98 had a catastrophic effect on the Nepenthes  present on the Mount Kinabalu due to the following drought that has seriously reduced the natural populations also for the fires in as many as nine locations of the Kinabalu Park, covering an area of about 25 square kilometres.

During this phenomenon many plants were temporarily relocated in the Park nurseries in order to save at least some of them that later on have been planted again in their natural environments in the Mesilau Nepenthes Garden.

In the ultramafic area of Pig Hill located at about 2000 m above the sea level, on the south-eastern side of the Mount Kinabalu, stands the natural hybrid Nepenthes × alisaputrana J.H.Adam & Wilcock  that has had its origin from the cross between  Nepenthes burbidgeae Hook.f. ex Burb. with Nepenthes rajah.

For the cultivation must be kept in mind that Nepenthes rajah is a highland species, therefore needing the conditions present in the tropical mountains, temperatures not beyond the 30 °C during the day and a thermal jump of about 15 °C during the night. Therefore, warm days and nights with temperatures varying between 10 and 15 °C. The non-compliance with this requirement will doom, in the long run, the plant or, at best, will limit it to remain small and inconsequential.

Moreover, like all Nepenthes, it requires humidity (from 65 to 75% to more than 95%) in order to grow up well even if, when young, is less demanding. 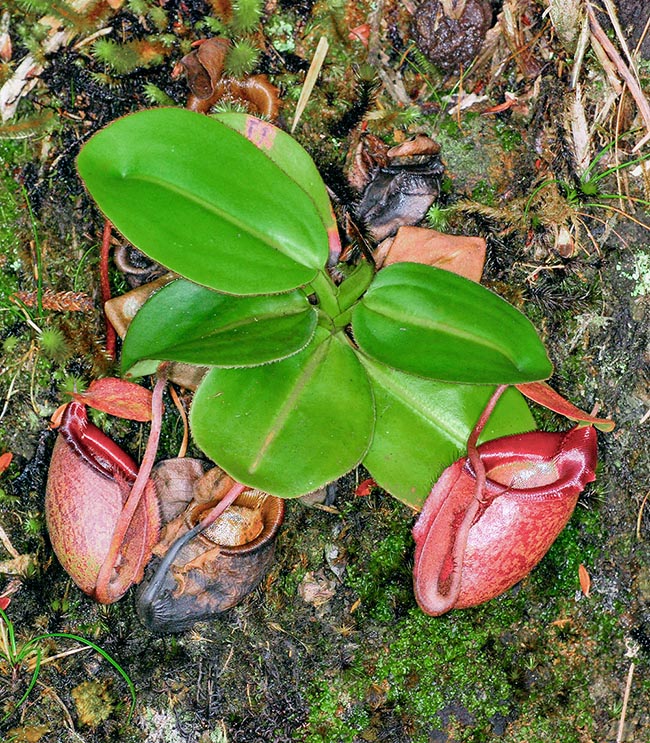 Young growing specimen. Out of its environment cultivation is not easy. An artificial lighting is needed for getting 12 hours of intense light, and starting from the seed are needed 10 years to see this species blooming © Eric Hunt

In its natural habitat, Nepenthes rajah grows in open zones therefore in cultivation is to be kept exposed to the light. Many growers utilize metal halide lamps from 500 to 1000 watt. A 12 hours photoperiod can be compared to that experienced in nature, as Borneo is located at the Equator.

For the repotting can be utilized long-fibred sphagnum moss but can be used, with same results, blends with any of the following elements: peat, perlite, vermiculite, sand, lava rock, pumice, Osmunda fiber, bark of orchid and horticultural charcoal.

The loam must be well drained and not too excessively compressed. The musk is excellent for holding the humidity close to the roots. The blend should be methodically saturated in water before potting the plant.

As Nepenthes rajah has an extensive root system, it is suggested to utilize a big pot to allow the right growth of the root system.

This eliminates the need of repeated repotting, which may lead the plant to a transplant shock and to a possible death.

For irrigating it is suggested to utilize water purified with reverse osmosis or distilled. However, stagnations are to be avoided as they might cause root rot.

Nepenthes rajah is a carnivorous plant and, as such, may be inserted in the ascidia insects to allow the plant to recover elements like nitrogen, phosphorus and potassium even if this is not essential for productive agriculture.

The use of chemical fertilizers is not recommended as pathogen agents and poor beneficial effects could develop.

Nepenthes rajah has a slow growth, and, in optimal conditions, it may reach the blooming not before ten years from the germination of the seeds.