The Ogcocephalus radiatus Mitchill, 1818 belongs to the class of the Actinopterygii, the ray-finned fishes, to the order of the Lophiiformes, species often characterized by the presence of an illicium, a sort of a fishing rod on the head like the well known Angler (Lophius piscatorius) that has given the name to the group, and to the family of the Ogcocephalidae, present in the tropical and subtropical seas, but Mediterranean, with animals having a body very flattened ventrally that move on the bottom, even at 2000-4000 m of depth, with fins transformed in legs.

The name of the genus Ogcocephalus comes from the Greek “ogkos (Ογκος) = spine, extension, curvature and “Chefalò” (Κεφαλή) = head, with reference to the first dorsal fin it has on the head, rightly transformed in a small line, whilst the genus radiatus, from the Latin rayed, evokes the arrow-shaped the pointed body.

It is a tropical fish of the Caribbean area, present in the Gulf of Mexico, including also the south-eastern coast of Florida, the Bahamas, Cuba, the Virgin Islands and further south, the waters of Trinidad and Tobago close to Venezuela. 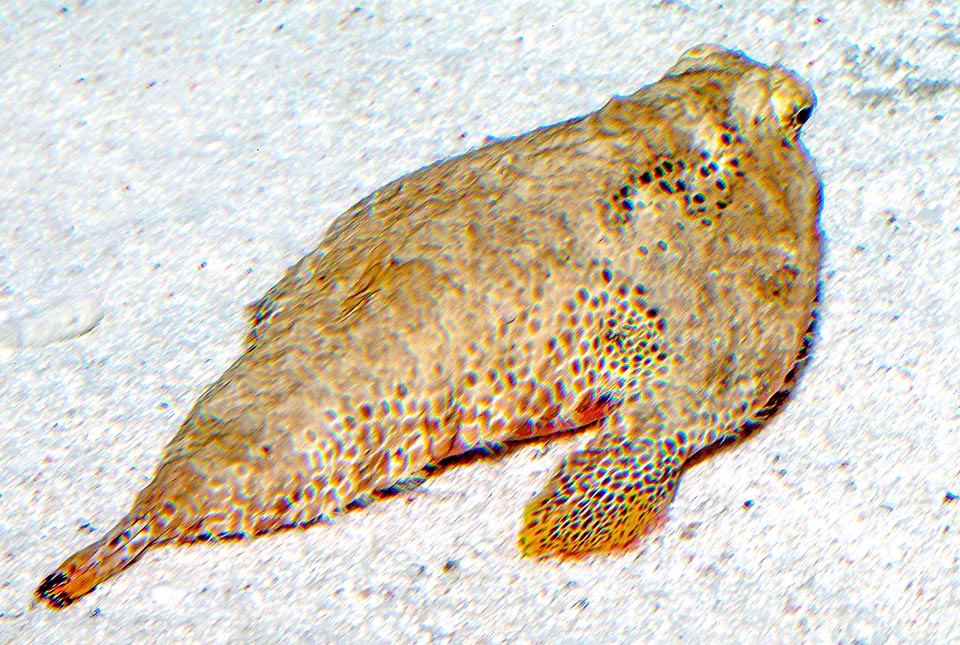 It is a benthic species present, seen the family, in relatively shallow waters as usually it does not exceed the 70 m of depth. It is often found semi-sunken into the sand and the rubble of the corals, along the edge of the reefs but also on the muddy bottoms where it stays motionless waiting for its preys.

The Ogcocephalus radiatus may be 38 cm long and seen from above it might be thought to be a strange club with its flay abdomen and the joints of the pectoral fins opening like arms on the sides forming on the head a sort of big triangle, whilst the pelvic fins, in an advanced position, are reduced to stumps for walking on the bottom. With such premises it is clear that the modest caudal fin and the rayed part of the pectorals are not sufficient to allow it to swim correctly. At most, these serve as balance when falling, for holding tight to the madrepores thus not sinking into the mud. 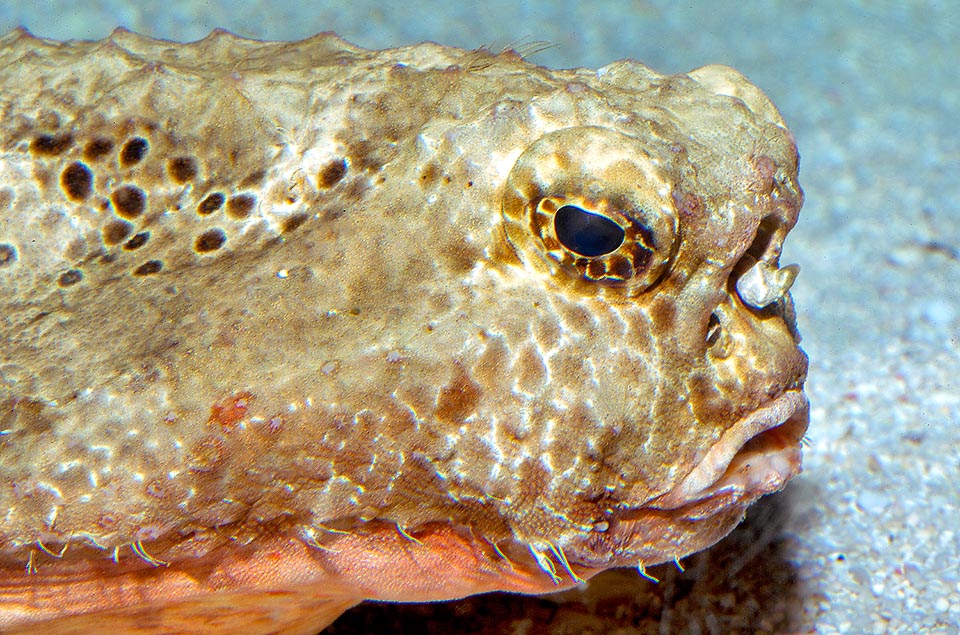 Like the Angler (Lophius piscatorius) or the Antennarius it has on the head a mobile fishing line, called illicium, here of very reduced size, but with a smelly bat © G. Mazza

The skin, rich of bulges, has no scales with a very variable camouflage colouring, usually brown with dark dots edged in white and scattered reddish spots as recites the English vulgar name of Polka-dot batfish, that is Bat fish Polka dotted. The abdomen is pink and the pectoral fins are orange yellow.

Nothing to see with the giant fauces of the Atlantic stargazer (Uranoscopus scaber) who misleads in a similar way the preys moving the tongue bent outwards, or that greedy of close relatives such as the Antennarius pictus, with whom the Ogcocephalus radiatus shares the mobile frontal line with a small tuft, here reduced to the minimum terms but able to emit a smell that appears attractive for the preys.

On the back stands a small symbolical fin and in the whole the appearance is thorny, with more or less prickly and more or less toxic asperities. 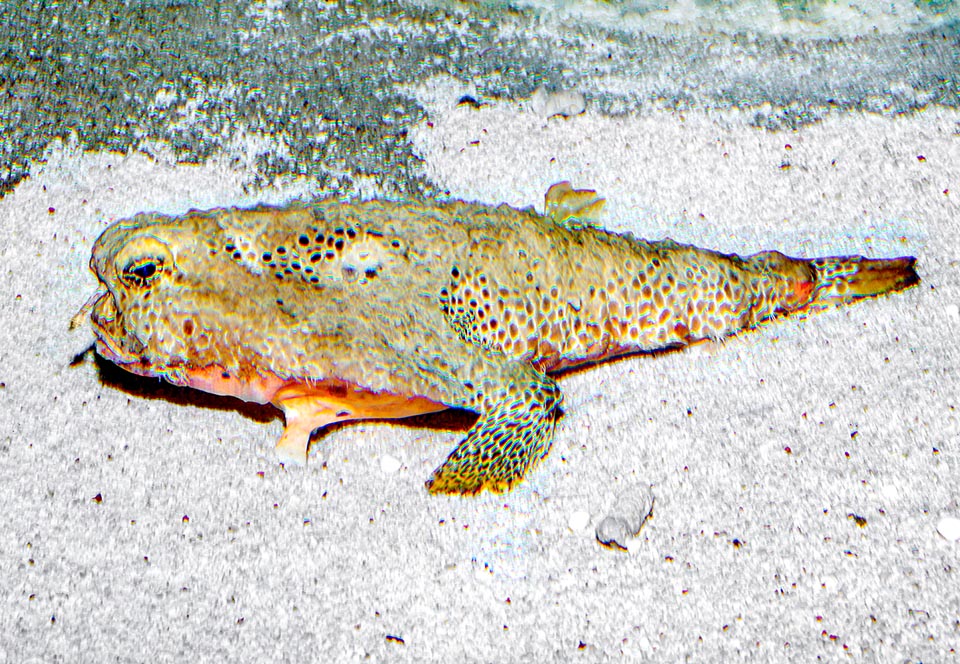 It hunts still, moving the illicium onle when an intrigued prey approaches. The roundish mouth is so small that the unfortunates must almost touch it © Giuseppe Mazza

Polka-dot batfish nourishes of small fishes but also of small crabs, shrimps, molluscs and worms it finds on the bottom. Camouflaged as it is, it almost keeps waiting for the prey, intrigued by the bat, enters its mouth, moving only when it sees a predator coming, in which case it sinks into the sand quickly with strokes of the pectorals.

The reproduction of this species is still to be studied but a low resilience is hypothesized .

The index of theoretical vulnerability index hence today (2019) marks 58 on a scale of 100.