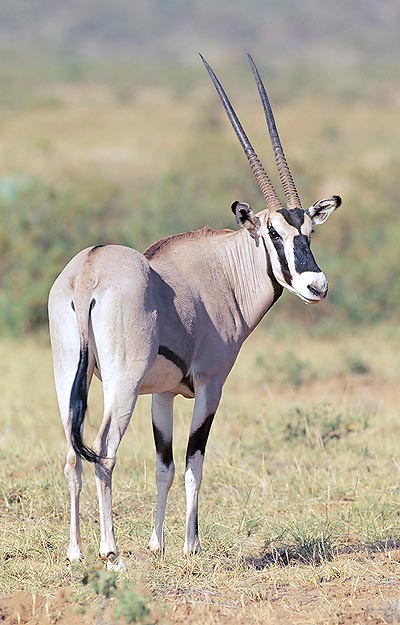 The Oryx beisa (Oryx gazella beisa Rüppell, 1835) is the member of this group of antelopes in the most arid and open zones of eastern Africa (Somalia, Kenya, Tanzania), whilst in southern Kenya and in Tanzania another subspecies is present, the fringed eared oryx (Oryx gazella callotis), which prefers the less arid and more thickly wooded (Acacia commiphora) zones and has the characteristic of having fringed, as the name indicates, ears, but which, for the remainder is much similar to the beisa.

This bovid (Bovidae) reaches a slightly smaller size than the southern oryx or gemsbok (Oryx gazella gazella), but is always an imposing animal with a height at shoulder of 120 cm in the male and weighing more than 200 kg.

The horns look like those of the gemsbok, long, thin and thickly ringed, ending in a sharp point, which renders them a dangerous weapon even for a big feline, and present in both sexes: those of the male are thicker at the base, whilst the female’s ones are thinner but at times even longer.

The average length is of one metre, but there are specimens equipped with 120 cm long horns.

The body structure is massive and squared, the neck is thick and robust, and the muzzle is proportionally rather short. The ears are less developed than in other species and seem even small if compared to the size of the animal. The mantle is rather similar to that of the Southern oryx (text Oryx gazella gazella).

An interesting characteristic is the gait of the oryxes, if compared, for instance, with that of the hippotragins.

If we observe a roan antelope (Hippotragus aequinus) or a black or sable antelope (Hippotragus niger) while pacing, we shall note that they keep a pace we may define as crossed, especially when they walk calmly and without being hurried, however, when they accelerate, (without even starting a real gallop), the “crossed” gait transforms into an amble. If we observe the oryxes, of whatever subspecies, we shall see, on the contrary, that they amble in every instance and that, when walking, they raise and lower the head, like weary nags, especially if they walk more quickly.

The trot is adopted only for short runs, and, mostly, as change of gait for getting into a true and real gallop.

Also the gallop, maximum expression of speed, in these antelopes which are fast and very resistant runners, differ a lot from that of the roan, of the sable and of other antelopes.

The gallop of the oryxes is extremely elegant and fluid, very linear and without any inelegant leaps: it almost seems that the animals slide on invisible rails, and in some moments all four legs are raised from the ground, whilst the head turns rhythmically from one side to the other, like a metronome, in rhythm with the strides, which may be even a couple of metres long, as it may be verified from their traces. 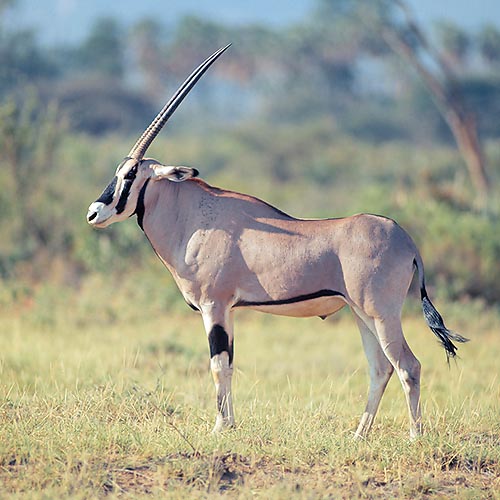 On the contrary, a galloping roan performs leaps which interrupt the fluidity of the run and lessen its elegance, whilst the legs are more flexed and for this reason a group of these animals when running gives the impression of a disorderly flight, whereas a small herd of oryxes seems to be sliding on invisible wheels, like in convoy.

The hippotragins as well as the oryxes develop a very remarkable speed and are tireless runners, the oryxes in the various subspecies (gemsbok, oryx Beisa, fringed eared oryx), are, however and without any doubt, the fastest and when they reach their top speed, their long straight horns are almost lying parallel along the body.

About their habits and behaviour, adaptation to desert and arid climates, please refer to the text concerning Oryx gazella gazella, keeping in mind that, along with the dromedary, these herbovores are those which have better adapted to habitats with extreme temperature ranges and with very poor water.

We might expect, from fierce animals, armed with potentially lethal daggers, duels to the last drop of blood or at least gory. This happens, really, some times, but, quite surprisingly, seldom.

A good part of the fights between males are quite ritualized and end up without serious harms.

The possession of dangerous weapons renders, inside the groups, a certain competition almost constant in order to establish the hierarchy, but, on the other hand, the same is characterized by some caution, thus avoiding frequent bloodsheds.

The utilization of visual signals, such as the movements of the tail and the ears, dominant postures, etc., are worth for keeping the “inferior” males at bay, whilst, if in presence of an “equal”, the challenge may be accepted.

The crossing the horns in duel goes from an almost symbolic contact to tactics designed to test the force of the competitor: a technique is that of the swipes, simple pats dealt with the fore edge of the horns, held oblique, almost without “wickedness”, resulting in a noise which may be heard from far away, another is that of the “front-pressing”, forehead to forehead, with crossed horns, while the two competitors push and twist in order to oblige the opponent in an uncomfortable and submissive position.

Another variant is the “horn-pressing”, same procedure as above, but with the horns and without contact of the foreheads. Also the side by side duel is frequent. 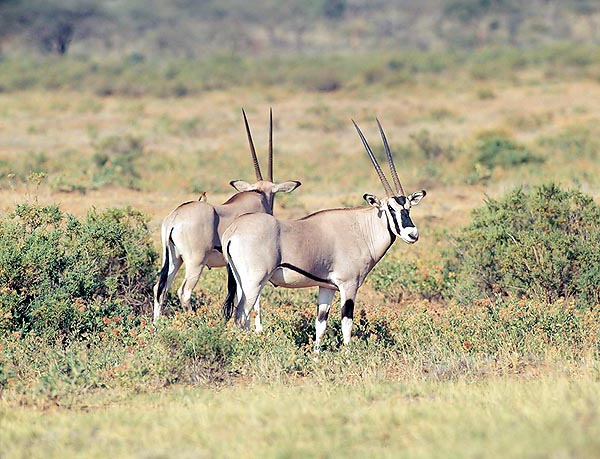 At the extreme stands the “stabbing”, where the injury with the tip or the death is possible, but this event happens usually when there is a crowding or an excessive competition. As defence technique, on the contrary, the “stabbing” is often utilized, and for this reason an injured oryx, when attacked or cornered, is an opponent not to be underestimated. Semi-domestic oryxes are, furthermore, extremely dangerous for the man, as they have lost any fear in his regards.

In the wild there are also quite curious facts: for instance, in a book of my library, there is the photo of an oryx with the adversary’s broken horn planted in the skin and protruding at the two extremities.

Another photo shows a rare case of duel between an oryx and a heartebeast; in another instance, on the contrary, I was present to a fight between an oryx and a gnu, ended with no winner, but probably it was matter of a discussion for the priority to a small pool of still water, yet another example of how much the nature may present anomalies galore.