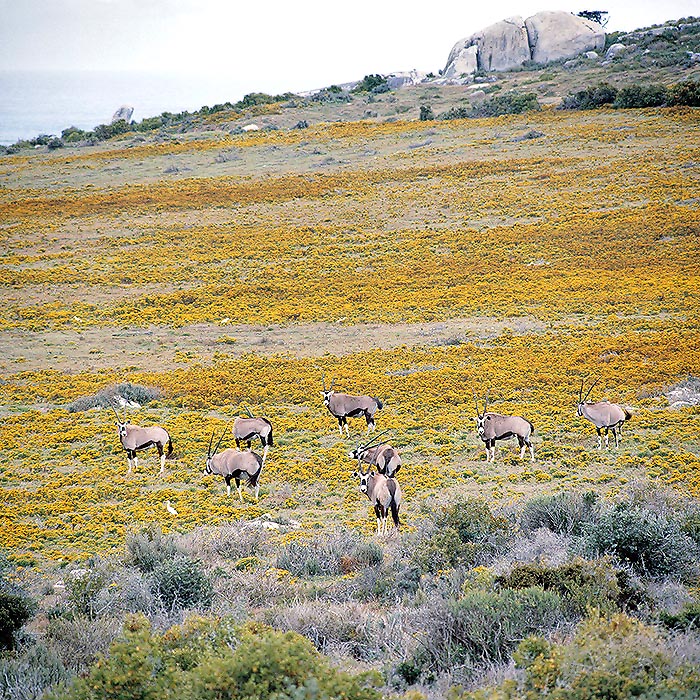 The southern Oryx (Oryx gazella gazella Linnaeus, 1758) is, like the other species of Oryx, a bovid (Bovidae, order Artiodactyla) which has adapted to arid and desert environments, present in the southern part of the African continent, including the Namibia, Botswana and part of South Africa, as well as the zone close to Kalahari and the boundary with the two afore- mentioned countries, and also in the Limpopo and in Mpumalanga. Besides this vast island of distribution, it is then present also in several areas more limited and scattered “leopard spots”, in South Africa, often in public or private reserves.

It is a great antelope, reaching a height, at the withers, of 130 cm (in the males) and a weight of 240 kg (females: from 120 to 190 kg), with a solid structure recalling that of a robust pony, with levelled and horizontal back, short and massive neck, robust and squared chest and proportionally long legs.

The muzzle is rather short and the head, which has not too developed ears, is adorned by long and sharp, like swords, horns with rounded section and thickly ringed, with average lengths of a metre, but with records of 120 cm, present also in the female, where they tend to be thinner at the base, but often as long, at least, as those of the male. The colour of the coat is basically in various nuances of grey but, in some individuals, maybe due also to the red dust of the habitat where it lives, tends to the pink. On this background tint, emerge contrasts of white and black, at level of the muzzle and the legs, more evident in this species than in the Oryx beisa (Oryx gazella beisa) and in that of the fringe-eared Oryx (Oryx gazella callotis).

Particularly, on the back of the snout is evident a black spot, of elongated trapezoidal shape, with the base over the nasal region, that embraces like a muzzle also the ventral part of the snout itself, and from which depart two more black lines going towards the eye.

In particular, on the back of the muzzle is evident a black dot parallel to the line of the eye and these dark marks contrast a lot with the white of the head and of the “face”. If we observe the animal by the side, therefore, we shall note the white of the “face”, traversed by three oblique black bands, followed by the grey or pink-grey colour of the sides and the back. The fore and hind limbs are black and white and a black stria underlines the passage between the sides and the belly, which is white. The tail is long and “horse-like” of black colour.

The southern Oryx colonizes arid and sub-desert environments, going also into the real and proper desert but, where this is possible, it prefers areas where also the prairie is present, even if thin and with little palatable grasses for other species of herbivores.

It goes to pasture possibly by early morning and by late afternoon, but it is not rare to see it pasturing during the night, especially if there is the moon. It grazes the grasses, even if coriaceous, but often browses leaves and small branches from the bushes. 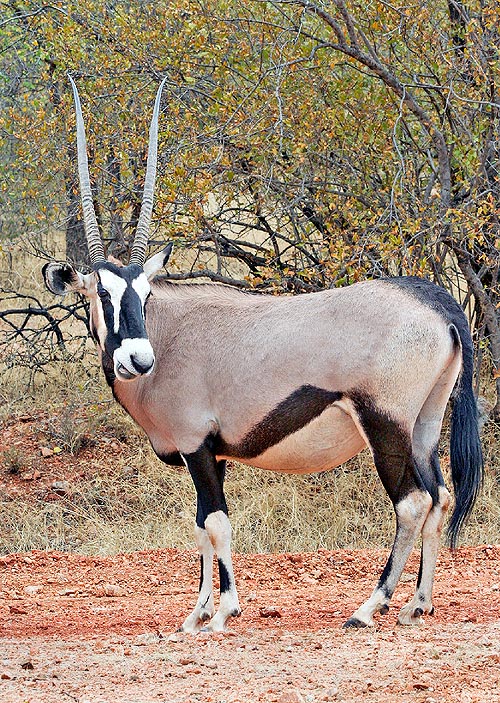 In a desert environment it gets liquids from succulent or fleshy plants; it loves particularly the so called wild or Bushmen melons (Citrullus lanatus var citroides), but is able also to burrow tubers from the ground.

When the water is present it goes willingly to drink, but it can resist also to long periods without it, getting liquids from the food, but, especially, by reducing the losses, with a very poor transpiration (before beginning to sweat, it can raise the body temperature from 35 to 45 degrees), and by concentrating the urines as well as, also, by reabsorbing the water of the faeces before these are excreted, dry and practically dehydrated.

It is a gregarious antelope, nomadic, also because of the type of its habitat, where the resources in a certain area end quickly, but, at times, the males are solitary and territorial.

The female, once delivered, may be in oestrum again very soon, and for this it may deliver at intervals of 9-12 months and this compensates a very high perinatal mortality. The groups of females and sub-adults, which at times include also non territorial males, move, looking for food, “visiting” different areas belonging to territorial males.

In such cases, the males aggregated to the herd, in order to avoid the attack from the dominant males, exhibit particular submission postures: lowered head, horns directed towards a different direction than to the opponent, exposed throat.

There is not a seasonality of the reproductive period and the coupling may take place in whatever period of the year, however, in a certain group, the births, fairly synchronized, suggest a certain coordination of the females in the entering the oestrum.

The courting of the male includes a series of turns which seem almost to imitate a fight, while the female keeps the head lowered, with the ears flattened, however, a frontal approach and too direct and aggressive, may induce, initially, the female to assume a defensive-offensive posture, with the horns lowered and stretched out towards the male.

In any case, finally, the female gives and one of the submission signals consists in cringing and urinate, after which the male checks the urine, usually with the “flehming”, which consists in the curling the upper lip, wrinkling the skin of the snout and rendering accessible the vomeronasal organs which, like the Jacobson’s organs of the serpents, effect an analysis of the scent signals and the pheromones, establishing whether the female is receptive.

The natural foes of the Oryx are the lion, the leopard, the lycaons, and the spotted hyena. In some cases the cubs may be predated also by the cheetah. The young are particularly defenceless, whilst the adult may, in some cases, reveal a dangerous adversary also for an inattentive lion and there are instances of great felines killed by a strike inflicted by those dagger-like weapons both sexes do have.

We have not to over excessively evaluate, however, the defence capacity of an Oryx against a big predator and the rule wants that, in most of the cases, it is the herbivore that will die, as nature wishes.

Also respect the man, a wounded Oryx may result extremely aggressive and dangerous but, even more, are dangerous the semi-tamed antelopes, used to the presence and the closeness of the humans, of whom they do not nourish any fear: incidents even serious have occurred and will occur, also because of certain superficiality and a Disney vision which many, poorly informed, have about the wild fauna.