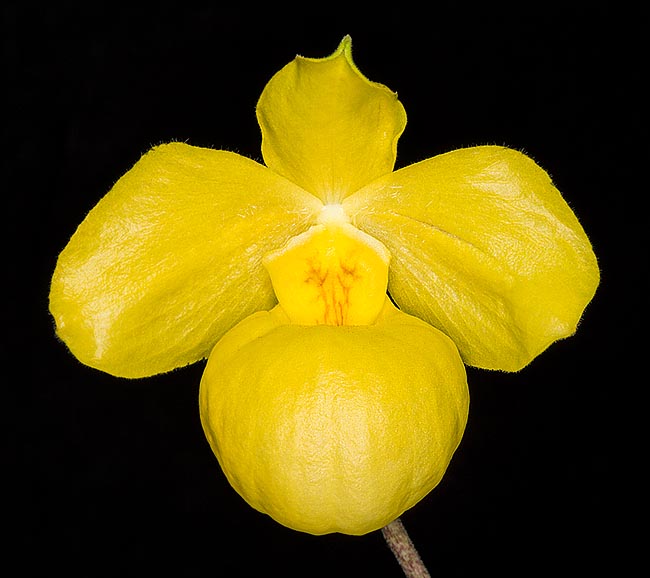 Paphiopedilum armeniacum, at home in China and Myanmar, was discovered only in 1979 © Giuseppe Mazza

The species is native to China (western Yunnan) and northern Myanmar, where it grows in the forests or thickets on calcareous rocky slopes exposed to north, between the 1400 and the 2100 m of altitude, with climate characterized by abundant in summer rains and by slight persistent fogs in winter.

The name of the genus is the combination of the Greek terms “Παφια” (paphia), attribute of Aphrodite, and “πεδιλον” (pedilon) = sandal, with reference to the shape of the labellum.

The name of the species refers to the colour of the flowers of the first specimen described which should recall that of the fruits of the apricot, the Prunus armeniaca L. (1753) 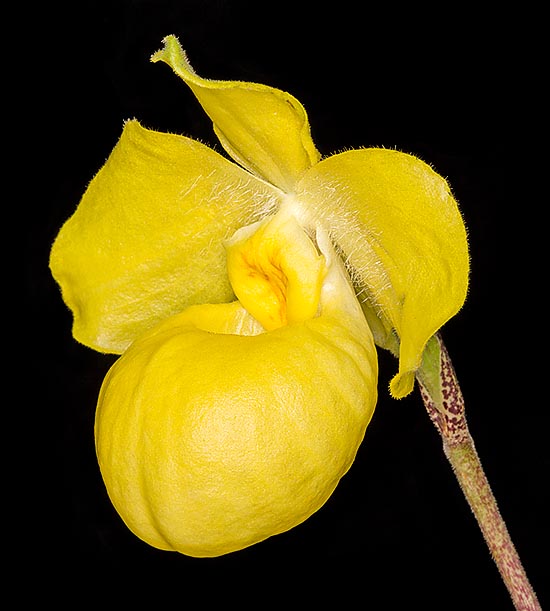 It reproduces by seed, in vitro, and by division, at the vegetative restart, with each section provided with at least 3-4 tufts.

Discovered in 1979, this species immediately aroused such an interest, due to the particular colour of the flowers and the ornamental foliage, to be at once object of an extensive collection that has quickly rarefied its presence in nature.

It requires high diffused luminosity and medium temperatures in summer, 18-25 °C, with high humidity, 75-85%, cooler ones in winter, 12-14 °C, with lowest night values preferably not under the 5 °C; it is fundamental, in all seasons, good and constant ventilation. Preferably cultivable in wide pots and baskets, to allow the rhizomes to expand freely, with particularly aerated and draining substratum which may be formed by medium sliced bark with agri-perlite and fragments of charcoal and possible sphagnum, for maintaining a bigger humidity, if the ambient is rather dry.

The waterings must be regular and abundant in summer, preferably in the first hours of the day thus to allow the water to dry up for avoiding stagnations at the axil of the leaves which may cause rottenness, spaced in winter, but without allowing the substratum to dry up completely. The waterings and nebulisations are to be done with rainwater, from reverse osmosis or demineralised, and the fertilizations, during the vegetative period, with hydrosoluble balanced products, with microelements, at ¼ of the dosage suggested on the package, distributed and alternated in way to avoid salts accumulation at the roots. The repottings are to be done by the end of the blooming.

The species is reported in the appendix I of the CITES (endangered species whose trade is allowed only in exceptional circumstances) and is inserted in the red list of the International Union for Conservation of Nature (IUCN) of the plants at very high risk of extinction in nature in the forthcoming future (“endangered”).