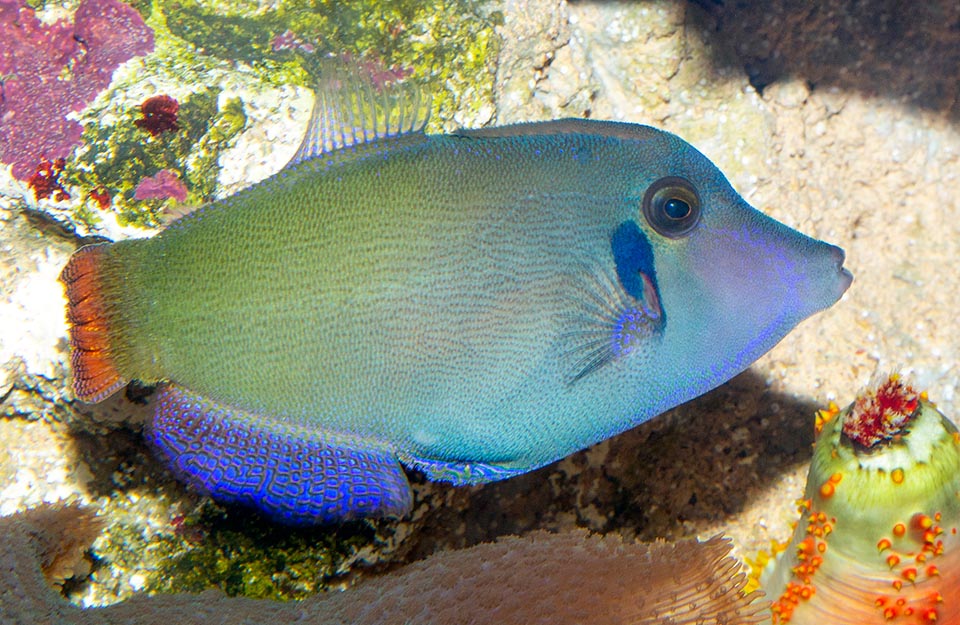 Pervagor janthinosoma (Bleeker, 1854), belongs to the class of the  Actinopterygii, the ray-finned fishes, to the multiform order of the Tetraodontiformes, the same of the Triggerfishes, the Boxfishes, the Pufferfishes and of the giant Ocean sunfishes (Mola mola), and to the family of the Monacanthidae, counting 28 genera and more than 100 species, vulgarly known as Filefishes, due to the roughness of their skin, covered, as is the case in the Balistidae, by bony plates, even if minute.

The name of the genus Pervagor comes from the Latin “vagor” = to wander, to roam, to go here and there, with the prefix “per”, that reinforces the term it precedes. This with reference to their uncertain way to swim. The specific term janthinosoma gets its origin from the Latin “ianthinus” = violet and “soma”, from the Greek “σῶμα” = body, epithet often taken by the scientific Latin with reference to the livery, mostly violaceous, and to the characteristic dark violet band between the rear part of the eye and the base of the pectoral fin, close to the operculum.

Pervagor janthinosoma is the most common species of the genus, with a very vast distribution in the Indo-Pacific tropical waters.

Indicatively, it is present from South Africa to Tanzania, and then we find it in Reunion, Mauritius, Chagos Islands and Maldives. Eastward, it reaches Australia, Timor-Leste, Indonesia, Philippines, Vietnam, Taiwan, Ryukyu and Japan that marks the northern limit of the species. Southwards, it has colonized the reefs of Lord Howe, and, eastwards, New Caledonia, and then those of Tonga and Samoa. 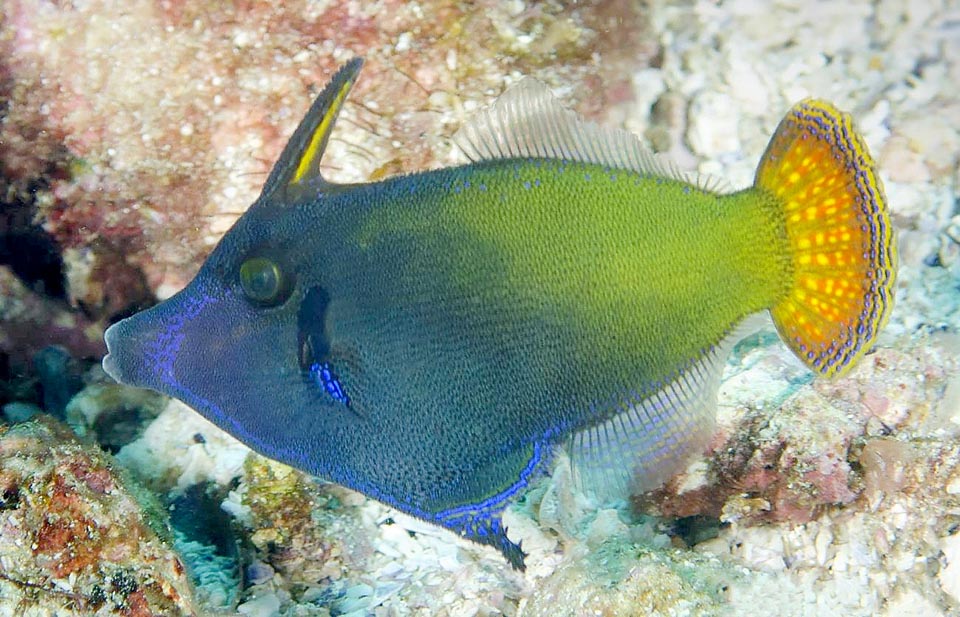 It goes swimming in shallow waters, among corals and rocks rich in ravines where to hide, usually between 8 and 20 m of depth. It lives coupled, but is often sighted alone, because they are very timid and when a diver discovers one of them, the other has already swam away.

Pervagor janthinosoma can reach 13- 14 cm of length. The body is flat, covered by the typical tiny spines of the Filefishes.

Above the eyes, generally with dark brown iris, the first dorsal fin forms, like in the Triggerfishes, an erectile small style, kept folded, when swimming, in its special lodging. Spine in the stomach of the predators, it is raised before the intruders, while the chinstrap spreads up to the tiny atrophied pelvic fins, in order to increase visually the size of the fish.

The zone of the head and the ventral are of violaceous grey colour, whilst the back and the rear part of the fish tend to greenish. 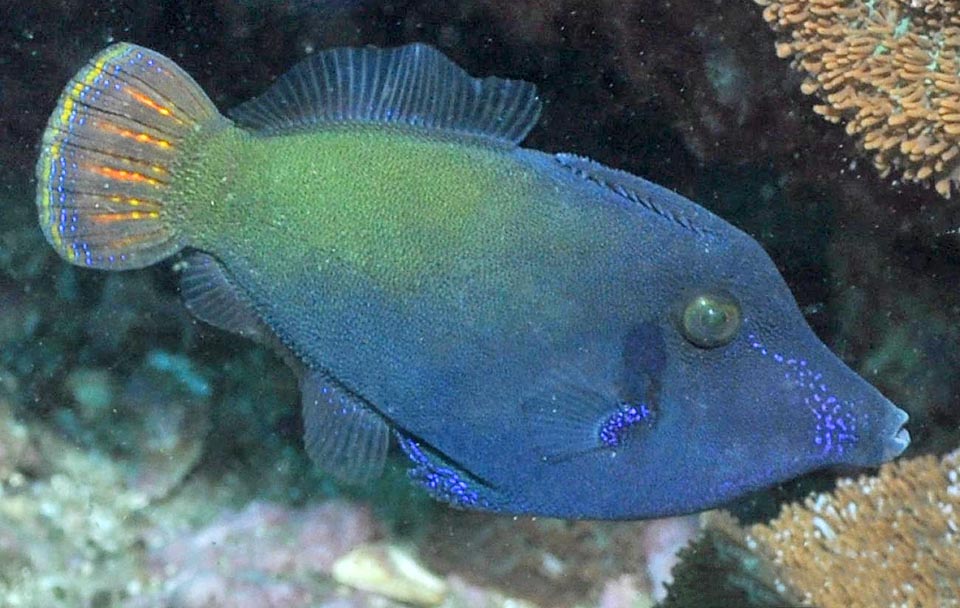 Pervagor janthinosoma is the most numerous membre of the genus, with very vast distribution in tropical Indo-Pacific © Rick Stuart-Smith, Reef Life Survey

The caudal fin, usually closed, is quite beautiful: orange with yellow dots and violet lines on the edge. The rear part of the first dorsal fin is evidenced by a yellow trait, to remind immediately to the predators, when raised and the light is poor, the presence of the stiletto.

Pervagor janthinosoma nourishes of small invertebrates and benthic algae. In short, of all what it finds and is deemed to be palatable, while exploring, tireless, the ravines.

When ready to reproduce, the female, followed by the male, looks for a secure place where to spawn, usually toxic algae avoided by the herbivores. After fecundation, the eggs are surveyed till the hatching by both parents. 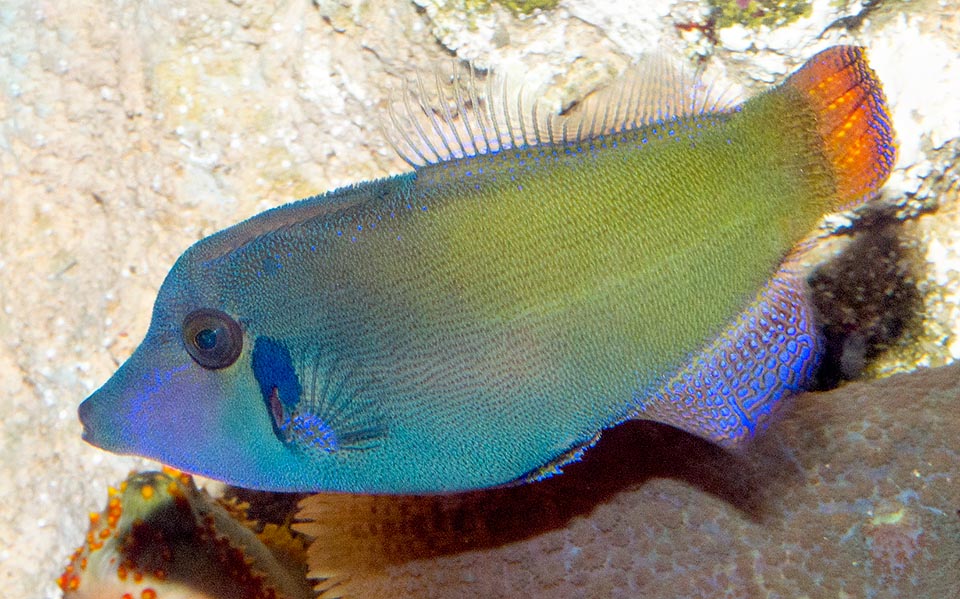 It eats small invertebrates and benthic algae. The nice traded specimens measure usually less than 10 cm but are not good for home aquaria © Giuseppe Mazza

Despite their small size and their splendid livery, the Pervagor janthinosoma are not suitable for the domestic aquaria. Apart from feeding problems, they need a quiet environment, without a bustle around, and could eat the living corals and the other invertebrates of the aquarium.

Furthermore, it is difficult to move them to another pool because of their spiny skin. In fact, it is not possible to fish them with the landing net because they might be caught between the meshes with serious stress and damages when they must be detached forcefully with the hands. They must be put gently in a container and taken off with the water.

Luckily, it is not an endangered species. Apart from the huge expansion, the resilience is excellent, with a possible doubling of the populations in less than 15 months, and the vulnerability index is now (2020) very low, marking just 24 in a scale of 100.