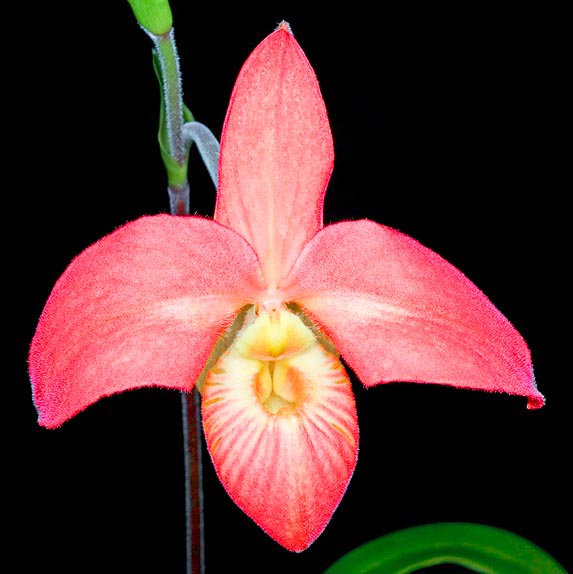 In the wild, Pharagmipedium besseae is endangered due to its beauty © Giuseppe Mazza

The species is native to Ecuador and Peru, where it grows on granitic, rocky cliffs close to water streams, between the 1100 and the 1500 m of altitude.

The name of the genus is the combination of the Greek terms “phragma” = division and “pédilon” = sandal, with reference to the ovary divided in three hollows (trilocular) and to the shape of the labellum; the species is honoured to its discoverer, the American botanist Mrs. Elisabeth Locke Besse.

The Phragmipedium besseae Dodson & J.Kuhn (1981) is a lithophytic or terrestrial species with creeping rhizome from which depart at fairly long intervals, short stems, wholly hidden by the imbricate foliar bases, with 5 to 10 alternate, persistent, leaves, distichous, coriaceous, linear, 10-30 cm long and 2-5 cm broad.

Erect terminal floral scape up to about 50 cm long, reddish and slightly pubescent, carrying 1-6 flowers lasting about 2 weeks which open in succession, of about 6 cm of diameter, of colour going from the orange red to the scarlet red. Ovate-elliptic dorsal sepal, slightly concave, about 2,5 cm long and 1,5 cm broad; lateral sepals united to form an only one sepal, called “synsepalous”, elliptic with pointed apex, 2-2,5 cm long and broad up to about 2 cm; stretched or slightly curved petals, elliptic with pointed apex, about 3 cm long and 1,8 cm broad, and saccate labellum with fairly narrow opening, 2,4 cm long and 1,6 cm broad. It reproduces by seed, in vitro, and by division, with each section provided of at least 3-4 tufts.

Since its discovery in 1981, it has raised such an interest for its bright and unknown colour in the genus, to trigger a hunt which has risked extinguishing it in the wild in quite a short time, furthermore, it has been, at once, utilized for the creation of new hybrids, which became quite numerous in a few years.

An important contribution to its success has been also the relative facility of cultivation, as it requires high luminosity, but not direct sun, medium temperatures with highest ones preferably not over the 28 °C and winter minima not lower than 12 °C, high atmospheric humidity, 50-70%.

The waterings must be frequent, even daily, preferably during the first hours of the day, in way to allow the water to dry up, in order to avoid stagnations at the axil of the leaves, the substratum is to be kept constantly wet, as it has not a precise resting period, and the air always in movement; in conditions of poor ventilation, in particular in summer with the high temperatures, it is easily subject to rottenness.

It does not stand salts accumulations at the roots, for the waterings and nebulisations is therefore to be used rain water, or obtained by reverse osmosis, or demineralised, and the fertilizations, with hydro-soluble balanced products, with microelements, are to be done at ¼ of dosage, or less, of what suggested in the package, distributed and alternated in way to wash away the residual salts. The substratum of cultivation may be formed by medium sliced bark fragments and charcoal, with possible addition of sphagnum and agri-perlite or other inerts, such as expanded clay, polystyrene, and fragments of siliceous rock or rockwool. As the substratum, due to the high humidity may quickly deteriorate, the repottings, to be done by the end of the flowering, must be frequent, even after 1-2 years.

The species is inserted in the appendix I of the CITES (endangered species whose trade is allowed only in exceptional circumstances).