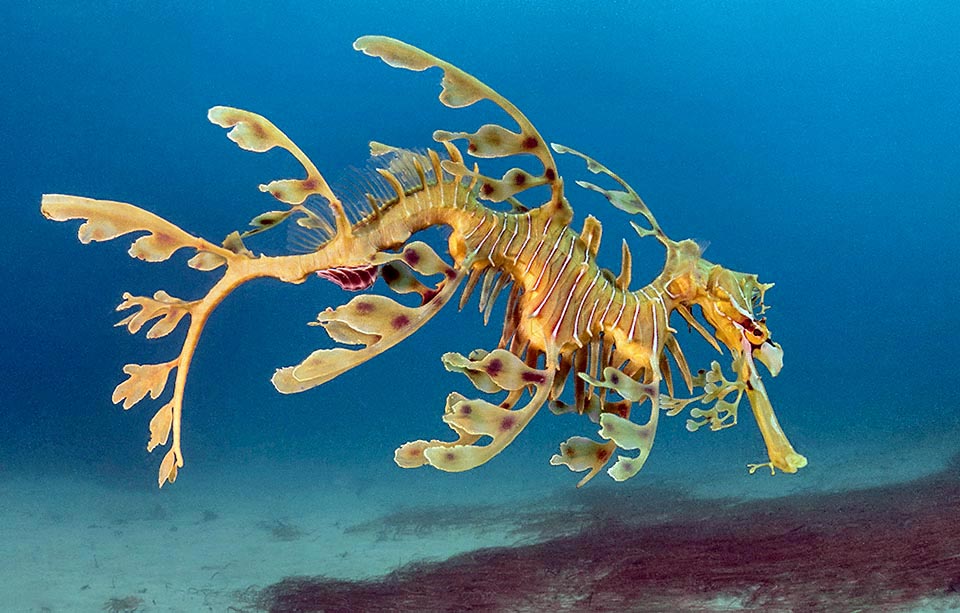 Related with the seahorses and the piperfishes, the Leafy seadragon lives along the coasts of southern Australia © Rafi Amar

Close relative to the Common seadragon, Phyllopteryx taeniolatus (Lacepède, 1804), the Leafy seadragon, Phycodurus eques (Günther, 1865), has developed to such an extent its resemblance with the seaweeds that nobody would consider it a fish.

Its mimetic outline, with showy ramified outgrowths, in fact, render it like a tuft of wandering seaweeds and consequently goes completely unnoticed to the eyes of the predators and of the prey. 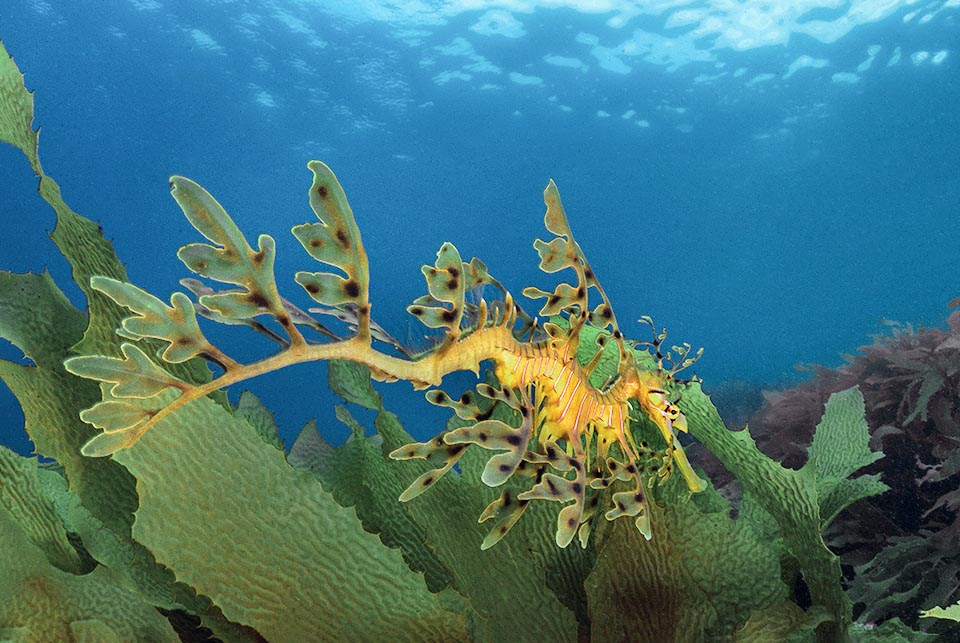 With its fanciful appendages like leaves has developed so much its resemblance to the green world that nobody would say it’s a fish, neither predators nor prey © Rafi Amar

The name of the genus Phycodurus not by chance originates from the old, Latinized, Greek “φύλλον”, weed and “δέρμα » (derma), skin, because of the skin resembling a weed, whilst the specific term eques, horse in Latin, also evokes this aspect.

A tribute, therefore, to Greek mythology with one eye to the Asian mythology. 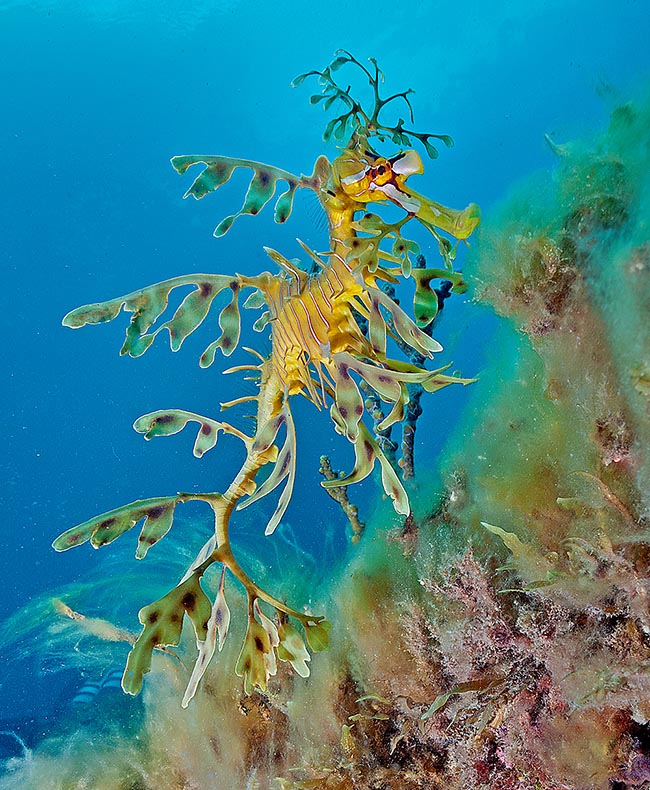 On the other hand, the Leafy seadragon is a close relative to the seathoses because it belongs together with the piperfishes  to the same family of the Syngnathidae, inserted in the order Syngnathiformes and in the class of the Actinopterygii, the one hosting all ray-finned fishes.

Like the Common seadragon, also Phycodurus eques is a species endemic to southern Australia with a range largely overlapped that goes from Geraldton, in Western Australia, to Melbourne, without however reaching the eastern coast and Tasmania.

Usually, it lives between 4 and 30 m of depth at temperatures mostly included between 13,3 and 29,8 °C, slightly higher than those where usually goes swimming Phyllopteryx taeniolatus, that, conversely, vary from 10,5 to 23,2 °C.

It is often found in the sandy zones close to the reefs where it frequents various species of seaweeds, with a predilection for the tufts of Ecklonia ovalis and Ecklonia radiata or the suggestive columnar structures of Macrocystis pyrifera and of Macrocystis angustifolia, microcosms where live the crustaceans being at the base of its diet, mostly belonging to the order of the Mysida.

The Leafy seadragon reaches a length of 35 cm, with a maximum of 45 cm.

A little smaller of Phyllopteryx taeniolatus, it has a less linear body, zigzagging, that renders it really like a dragon.

Like this one, it has no scales, armoured under skin by bony plates and protected by small spines, and has a long cylindrical snout, born from the merged jaws, as is the case of all Syngnathiformes, but the adults of the genus Bulbonaricus that, like Bulbonaricus brauni, display it only when young, during the first phases of growth. 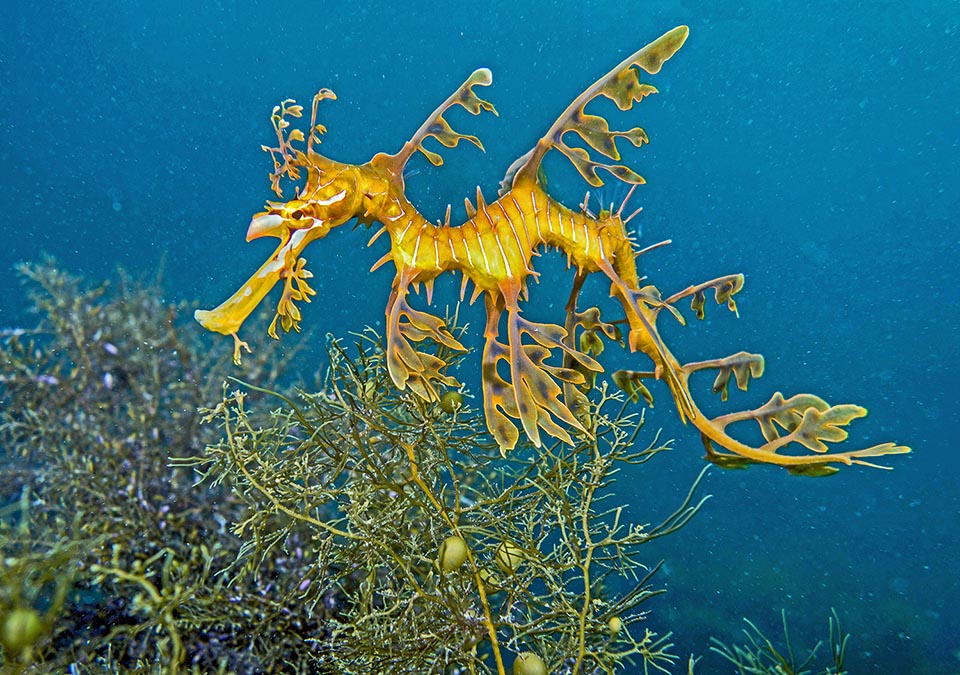 With its zigzagging body evokes a dragon, whilst the head has an equine look, hence the specific epithet of “eques” that in Latin rightly means horse © John Turnbull

The small toothless mouth is protractile and creates with its movement the necessary vacuum for aspirating in one shot into the tube the tiny prey that are gulped down whole.

The gill openings are circular, and not in crescent shape, as usually occurs in the fishes, and the outgrowths like leaves, at times even transparent, are not used for swimming but serve only for camouflaging. 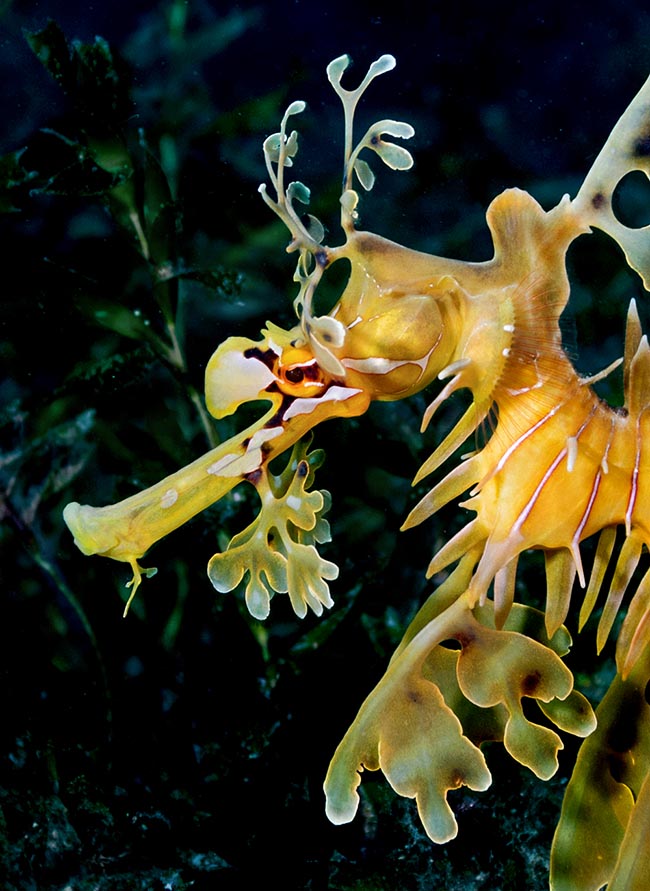 The gill openings are circular and not crescent-shaped, as usually occurs in the bony fishes. To note, close to the head, the tiny pectoral fins serving to keep stable the trim or to change direction © Psycho Hamster

There are no pelvic and caudal fins.

As for Phyllopteryx taeniolatus the tail is not prehensile and the movements are entrusted to the undulations of a modest dorsal fin, placed backward over the tail, and to the small pectoral fins, just visible close to the head, used for maintaining the trim and the changes of course.

With all its frills the movements of the Leafy seadragon are by sure clumsy and when it moves, more than swimming it seems to go drifting, in a way coherent, anyway, with its look of fluctuating seaweed.

It has been observed that it may keep motionless even for two-three days or to move at the speed of 150 m per hour, but when it gets far from the sites where it lives it is then able to find them again thanks to its strong sense of direction.

The livery, with clear vertical bars, is often yellow or greenish with dark spots on the mimetic paddle, but the background colour can change depending on the diet, the age and the emotions.

Usually, those living on the surface have light shades whilst those frequenting the deep waters tend to dark brown or burgundy red colour.

Phycodurus eques usually lives solitary, but in the reproductive period goes swimming in pair and can be found also in small schools counting a maximum of ten members.

Like the seahorses, also the Leafy seadragon has no stomach and must therefore nourish practically non-stop because its rapid digestion is poorly efficient.

It seeks and sucks in a snap with its long snout swimming and benthic microscopic shrimps, amphipods, larvae of fishes and plankton.

After courting, the female sticks with a long ovipositor on the tail of the male even 250 ova, immediately fecundates, covered by a gooey substance that stimulates the formation on the spongy skin of the partner many individual vascularized small cells, one per egg. 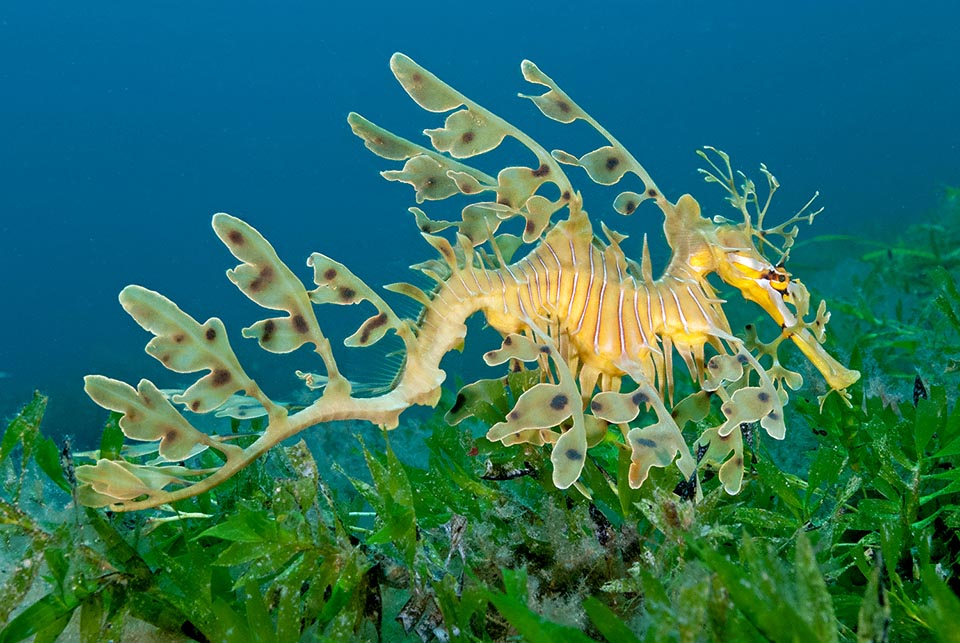 The motor is the modest dorsal fin placed over the tail. When moving, with all its frills, more than swimming seems to be drifting like a floating seaweed © Psycho Hamster

The embryos grow so fed, as well as by the yolk, but the paternal blood that also furnishes a good oxygenation. The eggs, 7 mm long and 4 mm wide, initially are pinkish and then tend to orange or to violet.

During the incubation, lasting about 9 weeks depending on the water temperature, the males often move towards the bottoms in order not to take the risk of being run aground by sudden sea storms together with the brood. 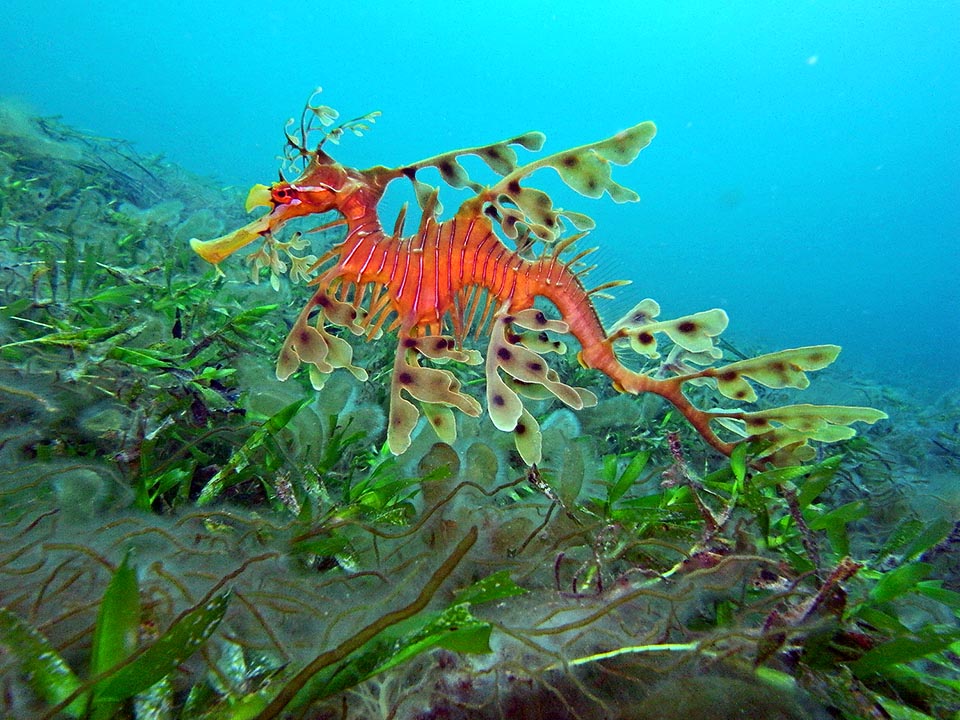 The livery, with pale vertical bars, is often yellow or greenish with dark spots on the mimetic paddles. The background colour may change depending on the diet, age and emotions. Usually the Leafy seadragon living in surface show clear shades whilst those frequenting deep waters tend brown or burgundy red © Sylke Rohrlach

When the delivery time gets closer, they swell the tail, pumping liquids for 1-2 days, to space out the eggs and to inform the unborn that the time of getting out is coming.

The births, piloted by the male with shakes and rubs to the tail against rocks and seaweeds, are distributed on 6-7 days thus ro reduce at the maximum the risks associated to dispersion. 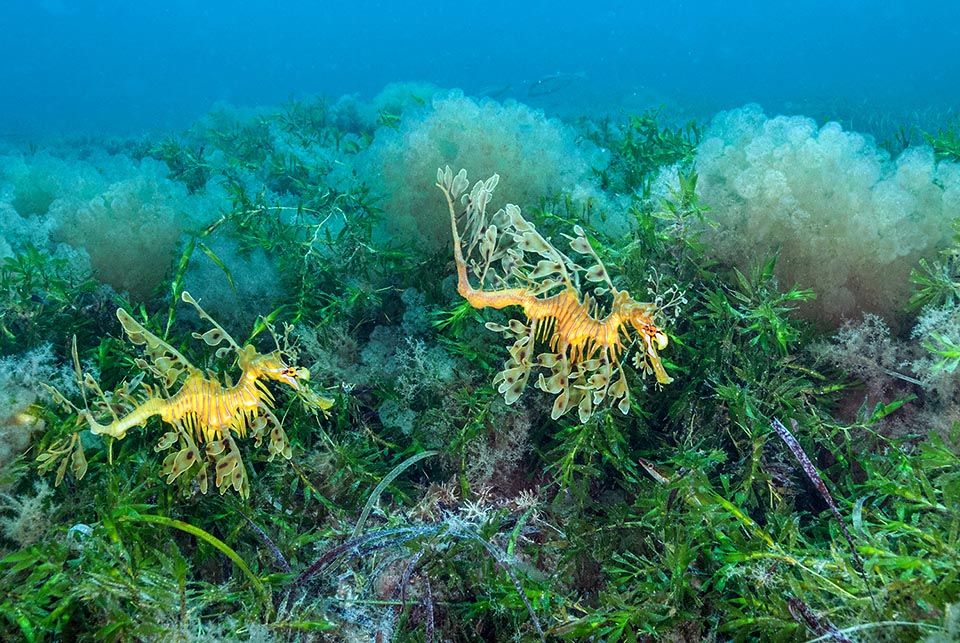 Phycodurus eques usually lives solitary, but in the reproductive time it may join small schools and often swims in pairs © Psycho Hamster 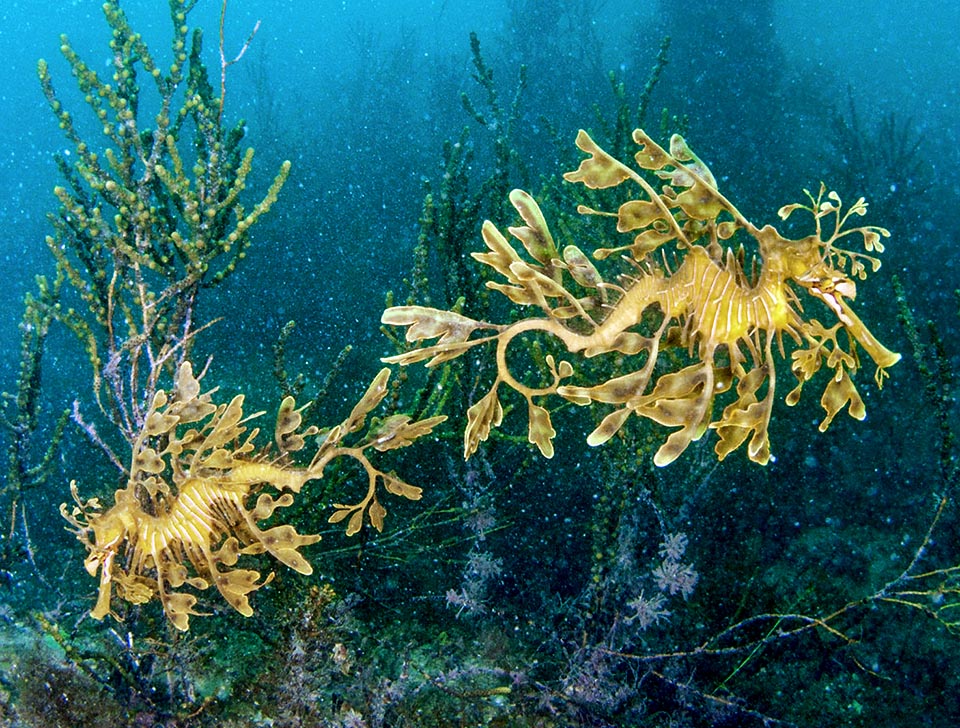 Courting may last long. When the male is ready the female glues on the tail of the male even 250 ova fecundated immediately © Andrew Newton

Just born, the kids have still attached the yolk sac, reserve of food for some days while going up to 5-7 m of depth where they grow nourishing initially only with plankton, mainly copepods and rotifers.

They measure about 20 mm but only a very small part manages to grow because they almost always end up among the urticant tentacles of the sea anemones. 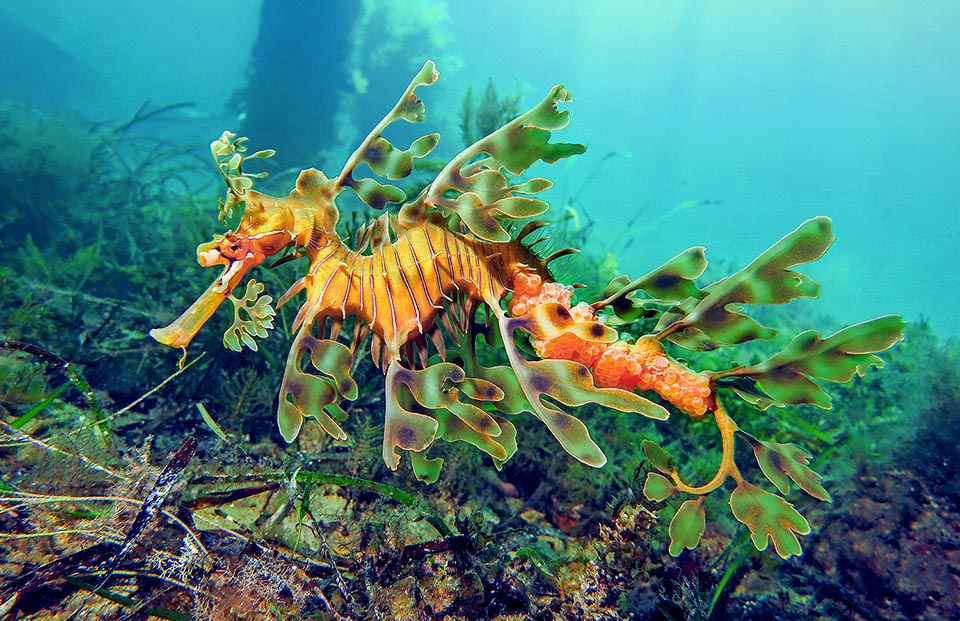 Around every egg forms a vascularized small cell, and so, besides the yolk, the embryos receive food and oxygen from father’s blood © Rob & Sue Peatling 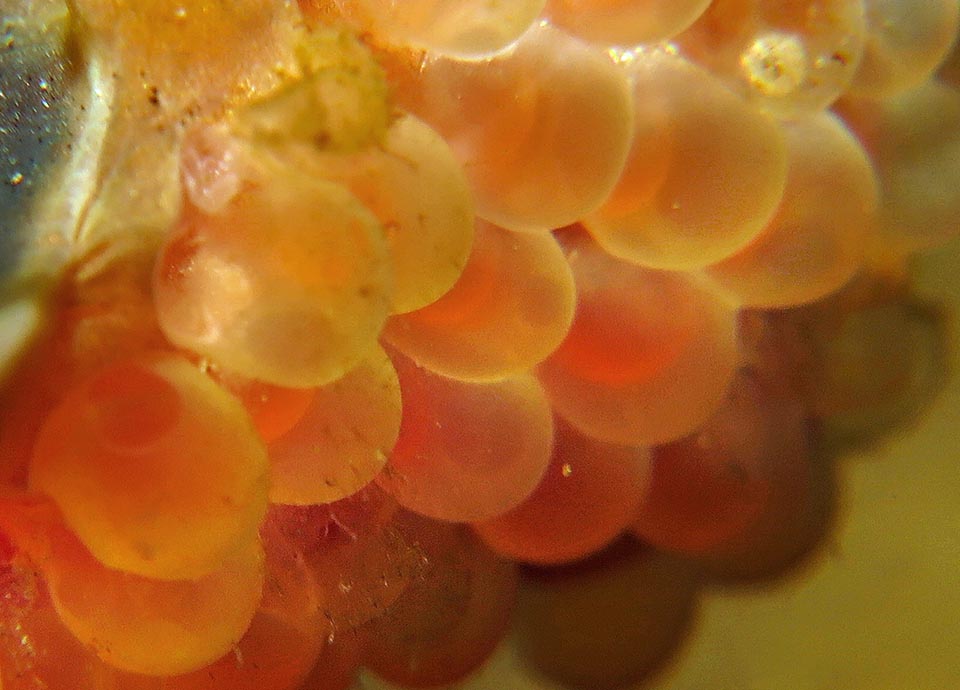 Incubation lasts about 9 weeks. The births, piloted by the male, are staggered on 6-7 days to reduce the dispersion risks © Rob & Sue Peatling

They usually reach the sexual maturity between the first and the second year of age, when they measure about 20 cm, and in the large public aquaria they may live 7-8 years.

The resilience of the species is good with a possible doubling of the populations in less than 15 months and a vulnerability index linked to the fishing that marks nowadays, in 2022, only 25 on a scale of 100. 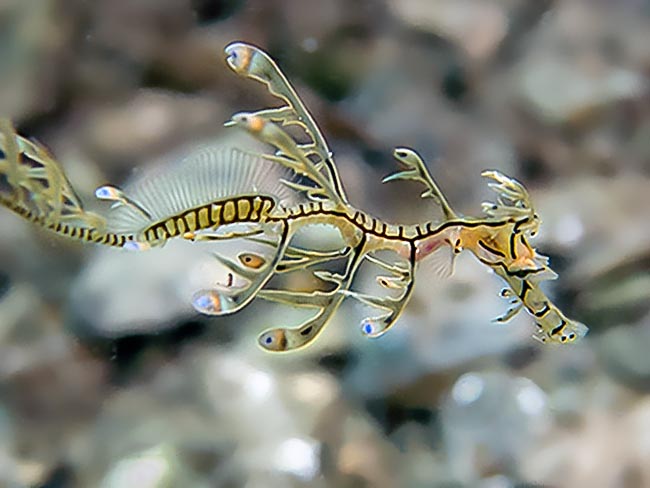 As a matter of fact, it is not a species threatened by the trawl fishing, because it does not live anchored to the bottom, or haunted, as is the case for Hippocampus kuda, by the traditional Chinese medicine, even if some dried Leafy seadragon is still sold in powder at great cost to the unwary who still believe in our days, like for the horn of the rhinos, in its miraculous therapeutic virtues.

Moreover, it is not requested for the domestic aquaria.

Apart from its size, in fact it needs refrigerated tubs and a constant feeding with small live prey not to talk about the parameters of the water.

Only a few public aquaria may host it and by sure they do not represent a threat.

Therefore, the species appears presently in the Red List of the endangered species as “Least Concern”, that is at minimum risk, but the environmental degradation linked to the human activities, with the risk of pollution caused by fertilizers and insecticides that accumulate in the sea, cannot go on without any consequence on the shallow waters where they live.

In South Australia, however, it is luckily a very loved and protected species also because, being very photogenic and easy to approach, it increases submarine tourism. 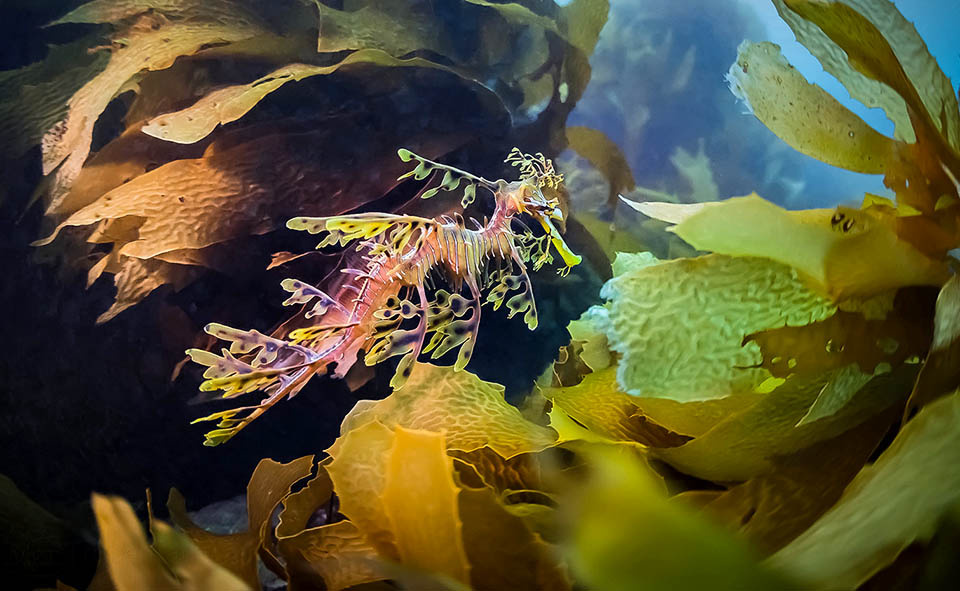 If not devoured by the sea anemones, when they are 20 cm long they are already able to reproduce and, well maintained in the public aquaria, reach the age of 7-8 years © Robert Rath

In 2006 they have realized an animated film, “The Amazing Adventures of Gavin, a Leafy Seadragon” with the aim to involve the young in the conservation of the marine environment, and every two years, in the Fleurieu Peninsula, not far from Adelaide, in front to the Kangaroo Island, is celebrated a festival dedicated to the environment and centered on the Leafy seadragon that attracts thousands of participants and tourists.

Phycodurus eques was last modified: May 6th, 2022 by Peppino