Pinanga scortechinii Becc.  is endemic to peninsular Thailand and to Malaysia, where it grows in the pluvial forests up to 1000 m of altitude.

The name of the genus Pinanga comes from the Latinization of the term “pinang” given in the origin sites to these palms. The specific name scortechinii honours the memory of Benedetto Scortechini (1845-1886), Italian priest, naturalist and explorer who collected plants in Australia, in India and in the Malay peninsula.

Pinanga scortechinii is usually a multi stemmed palm, with at times individuals having a solitary stem. The tufts are dense and the biggest ones reach the height of 5 m, with a crown of pinnate leaves up to 4 m broad. The stems are erect and smooth, similar to bamboo canes, with an up to 5 cm diameter, of olive green colour, marked by grey rings, scars of the fallen foliar bases, spaced about 10 cm. 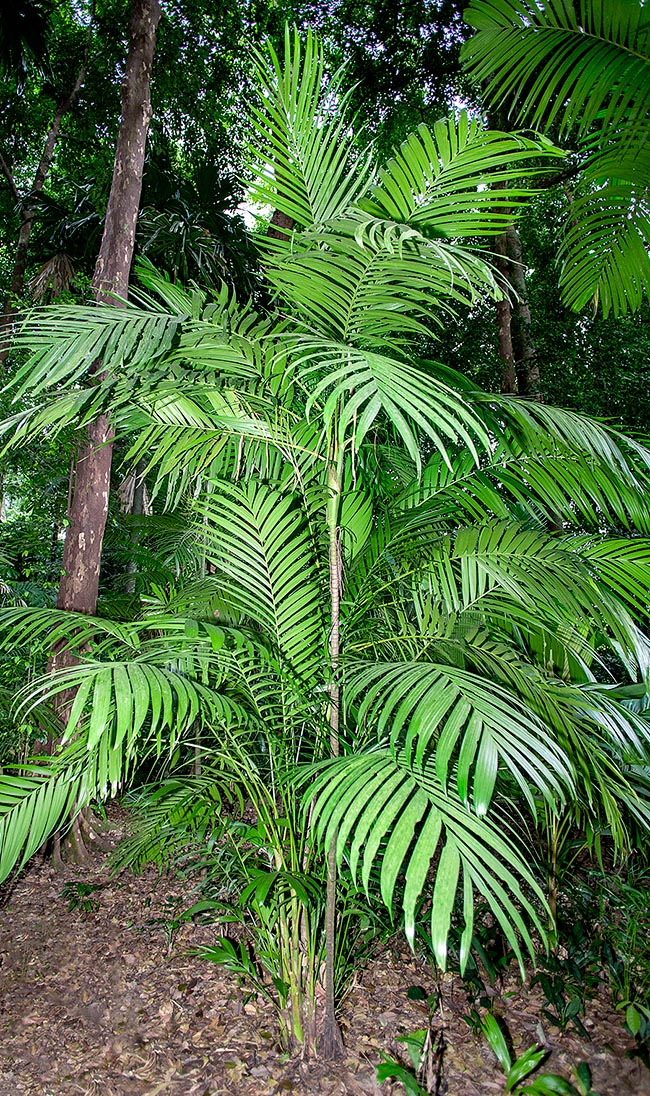 The leaves are pinnate, up to 2,5 m long, with thin pinnulae, regularly and symmetrically arranged on the same level in respect of the rachis, 6 to 22 per side, 30-70 cm long and up to 5 cm broad, of pale green colour on the upper pagina, but at times also streaked with dark green and of glaucous green colour on the lower pagina. The pinnulae usually have pointed apex, but the terminal ones can have the apex truncated and toothed.

The green petioles, 30-60 cm long, end in a sheath wrapping completely the stem, up to 60 cm long. It often assumes a yellow-orange colouration, covered by a darker tomentum.

Pinanga scortechinii is a monoecious species and the inflorescences emerge from the stem, under the leaves, in correspondence to the interfoliar rings. They are erect, up to 30 cm long, ramified in 3-9 smooth rachillae, reddish, 5-8 cm long. The male and the female flowers of cream colour are densely arranged on the rachillae, organized in the characteristic triads formed by one female flower and two males.

The fruit is ovoid to ellipsoid, even 1,3 cm long and about 1 cm broad. Initially, it is of a waxy white colour, then pink and finally black when ripe.

Pinanga scortechinii  has by sure an excellent potential as ornamental plant, but is little known in cultivation in the origin countries as well as in the rest of the world, and can be admired almost exclusively in the botanic gardens.

It can be cultivated in open air only in tropical and subtropical climates, with high humidity, where the temperature never does go down under 5 °C. It prefers shady and sheltered positions, protected by trees and shrubs. It does not stand the action of the winds, especially the dry ones that can lead to the death of the plant.

The soil must be fertile, rich in organic substance, and always maintained humid. The substratum must be draining, as even if the species needs a lot of water, it does not tolerate stagnations at the roots.

It could be cultivated in pots for indoor decorations, like the more known and diffused Pinanga coronata, if placed in a luminous position and with fertile substratum, mixed to sand and agri perlite to improve the drainage and avoid radical rot.

It easily reproduces by seed or by division of the tufts. The seeds germinate in 1-3 months at the temperature of 24-28 °C.