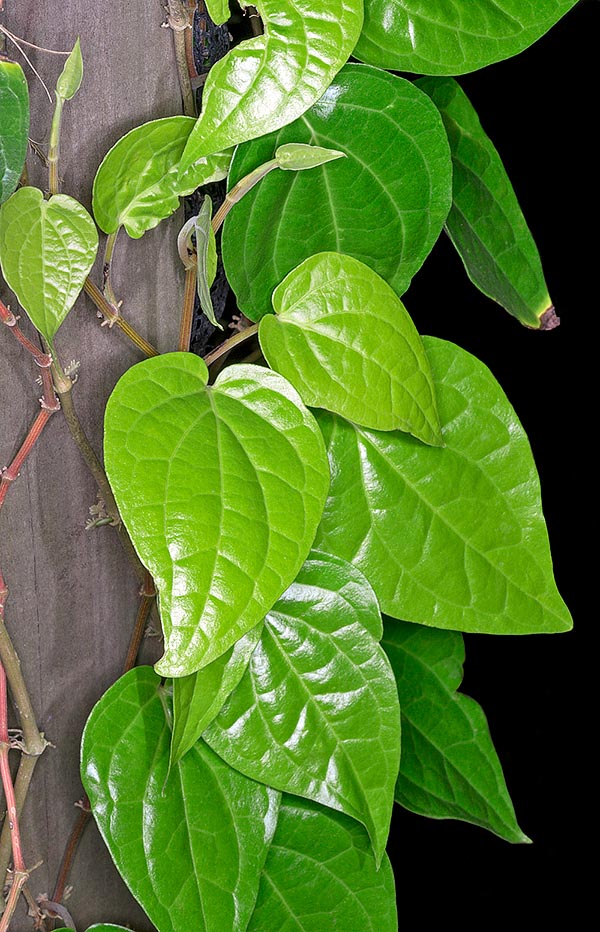 Cultivated since ancient times for the chewing use of the leaves, its origin place is not known, supposedly the Indo-Malaysian area, where is present in the humid forests up to about 900 m of altitude.

The name of the genus is the Latin one, “piper, -eris” = pepper, of the spice gotten from the fuits of the Piper nigrum L.; the specific name comes from the Malayalam “vettila”.

The Piper betle L. (1753) is a dioecious evergreen climber with partially lignified and enlarged at the nodes dichotomous stems, up to 15 m long and of 3-5 mm of diameter, that adhere to the support by means of adventitious rootlets produced in correspondence to the nodes.

The leaves, on a slightly pubescent petiole 1,5-8 cm long, are alternate, simple, oblong-ovate with poined apex, cordate base, entire margins and 5-7 prominent veins, of intense green colour or greenish yellow and glossy above, pale green below, rather coriaceous, aromatic, 6-16 cm long and 4-12 cm broad.

The inflorescences, produced at the nodes on the side opposite to the leaf on a 2-3 cm long peduncle, are spikes with numerous tiny whitish or yellow-greenish flowers, without sepals and petals, thickly arranged along the rachis, the male ones semi-hanging, cylindrical, 7-14 cm long and of 2-3,5 mm of diameter, the female ones, drooping, cylindrical, 3-8 cm long and of 0,5- cm of diameter.

The fruits are fleshy drupes, of about 2 mm of diameter, merged with the rachis to form an aggregate fruit (syncarp), cylindrical, fleshy, initially green, then reddish orange when ripe.

It propagates by seed, but usually the numerous varieties that have been selected over time are reproduced by cutting.

In cultivation are utilized various arboreal species and palms (usually Areca catechu L. and Cocos nucifera L.) as support, limiting the height, with proper prunings, to about 2 m in order to facilitate the collection of the leaves.

The use of chewing the “betel”, that is leaves of Piper betle that wrap small pieces of seed (nut) of areca (Areca catechu L.) and slaked lime (calcium hydroxide), as stimulant, antiseptic and refresher of the mouth, is diffused since the old times from India, Sri Lanka, southern China, Indochina, Malaysia, Malaysian Archipelago up to the Philippines.

The slaked lime is obtained from the calcination of shells, coral or calcareous rocks and to the three main ingredients are possibly added tobacco and spices of various type; this mix, besides causing an abundant salivation, gives the teeth and the mouth a typical intense red colour. Despite numerous scientific researches that should prove that such habit may cause various harmful effects, up to precancerous lesions to the mouth, it is estimated that about the 10% of the world population is currently using it.

The leaves, sufficiently ripe and healthy, are harvested by hand with a portion of petiole, washed, divided by size and colour and packed in bamboo baskets with the inner walls covered by leaves, usually of banana to maintain them fresh, and sold in the markets. Besides for preparing the “betel”, the leaves, raw as well as cooked, are amply utilized for aromatizing several dishes typical to South-East Asia; also the fleshy infructescences are consumed in some countries. The plant has furthermore a major rôle in the traditional medicine, in particular in the Indian one, for various pathologies; laboratory studies have evidenced in the extracts of the leaves the presence of several bioactive compounds with antioxidant activities, as well as antibacterial and antiinflammatory, of possible employment in the official pharmacopoeia. 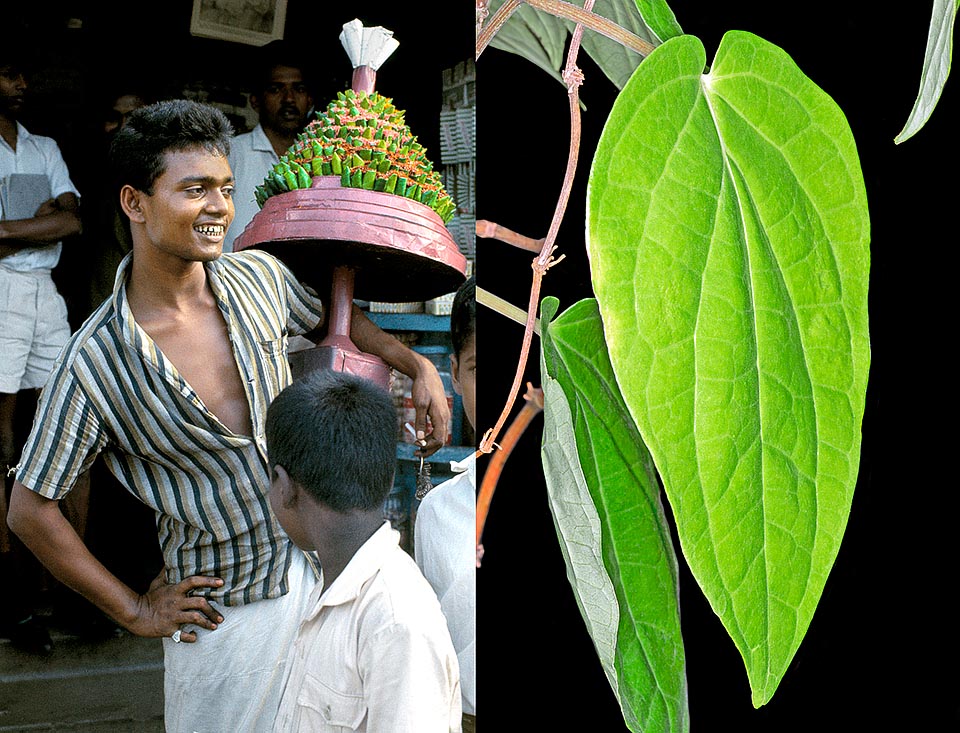 The leaves that wrap fragments of Areca catechu seeds, main ingredient with slaked lime, to which at times are added spices and tobacco, are locally sold for chewing with the name of “betel”, deemed stimulant, antiseptic and refreshing. Despite the carcinogenic risks and the red colouring of the mouth with nasty spits and the typical blackening of the teeth, it is estimated to be consumed by the 10% of world population. The leaves of Piper betle conversely display medicinal virtues © Giuseppe Mazza

Neurological and toxicological effects of the betel © Prof. Giorgio Venturini

The one who chews the betel refers to perceive a feeling of well-being, euphoria, increased alertness, improvement of the working capacities, feeling of warmth, sweating and increase of salivation. The use of betel causes addiction and dependence. In spite of the enormous diffusion of the use of this drug, its action mechanism is still only partly understood. The three components of the “betel” or “paan”, that is the leaves of the Piper betle, the seeds of Areca catechu (the so-called Betel nut) and the calcium hydroxide (or other basic substances such as the sodium bicarbonate), play complementary rôles in the action of the drug. It must be remembered that the same use of the lime is common among those chewing the leaves of coca.

The main component is the seed of Areca catechu that contains some alkaloids such as the arecoline, arecaidine or the guvacoline. The first substance has a strong parasympathomimetic action, stimulating the receptors for the neurotransmitter acetylcholine and this explains the stimulating action on the central nervous system of the drug besides the stimulation of the salivation and the digestive action. The Areca catechu performs also anthelmintic action. As the seed of areca contains astringent tannins, in the traditional use it is associated with other vegetals, like, rightly, the leaves of betel, that stimulate the salivation and confer a better taste to the mixture attenuating the astringent effect.

However, the leaves of the Piper betle contain phenolic compounds that stimulate the functions of other neurotransmitters, namely the catecholamines.

The addition of lime or of other basic substances, alkalizing the saliva, facilitates the extraction of the alkaloids and increases its assimilation, but especially modifies chemically some of the substances present in the areca producing compounds endowed of various pharmacological activities. The arecoline and the guvacoline of the Areca catechu are transformed in arecaidine and guvacine, that interact with the functions of an important neurotransmitter of the central nervous system, the GABA.

Therefore, overall, chewing the betel interfers with many functions of the central nervous system as well as of the autonomous. This complex assembly of pharmacological actions stands probably at the base of the psychoactive mechanisms that explain the popularity of the use of this drug that does not show any reduction since the remote old times.

The Areca catechu nut as well as the leaves of the betel have a mutagenic, carcinogenic and genotoxic activity, well demonstrated in experiments on laboratory animals. For what concerns the man several epidemiological studies show an association dose- and time-dependent between the use of the betel and oral precancerous lesions or cancers of the pharynx, larynx and esophagus. Also the addition of lime to the mix contibutes to increase the risk of cancer, since it can stimulate in the betel the production of nitrosamines, powerful carcinogenic substances.

The British Medical Journal has estimated that the habit of chewing betel is responsible of half of the cases of cancer to the mouth that occur in India. A further important dangerous effect of the betel, reported by the American Dental Association, is given by the strong increase of the oral submucosal fibrosis, incurable condition that leads to the stiffness of the jaw muscle up to the loss of the mobility of the mandible. Furthermore, the use of the betel, besides spotting the teeth, damages the gums with increase of tooth decay and of the tooth loss. We must finally remind the the use done by pregnant women exerts a serious embryotoxic action.

As a whole, some studies suggest that chewing regulalry the betel can increase the risk of cancer of about 8-9 times and shortens the average life expectancy of about 6 years.

The betel and the literature

The huge diffusion in Asia of the use of the betel, with the showy consequence of stained teeth and abundant red salivation has hit the phantasy of authors of stories set in oriental countries, visited by them (like Conrad) or only dreamt (like Salgari) and in our imaginary of readers the Orient is inhabited by people having the cheek swollen by the bolus of betel, engaged in emitting jets of scarlet saliva.

Emilio Salgari, “The Pirates of Malaysia”:

Some of those men were chewing the siri, compound of leaves of betel and of nuts of areca, throwing on the floor blood spits.

Or “The Mystery of The Black Jungle”

TremalNaik … drew from a pocket a leaf similar to the ivy one, known in India under the name of betel, with a sourish and somewhat pungent taste, joined to it a small piece of nut of areca and some lime and started chewing this mix that is said to comfort the stomach, to strengthen the brain, to preserve the teeth and to cure the breath.

And the two remained there sitting in the close yet silent communion of the chewers of betel, moving the jaws slowly. Spitting decorously into the wide brass bowl that passed with one another…