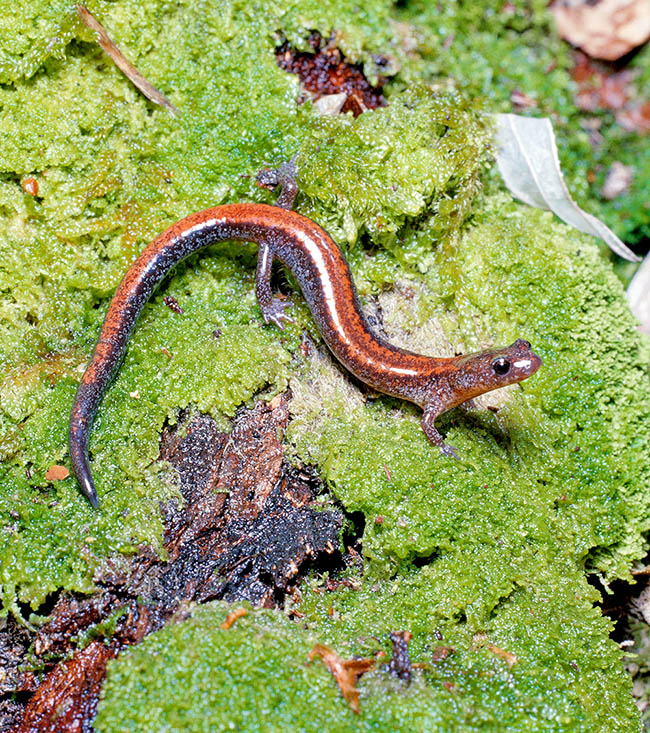 Endemic to North America, the Red-backed salamander (Plethodon cinereus) lives in the litter of Canada and United States humid forests. It is well distributed from the sea level up to about 1500 m of altitude © Giuseppe Mazza

Red-backed salamander [Plethodon cinereus (Verdi, 1818)] is an amphibian belonging to the order of the Caudata, family Plethodontidae, native to Canada and the USA.

The Plethodontidae are one of the numerically bigger families of amphibians. They represent about 70% of the urudelous amphibians presently described, with a diffusion going from Canada to Brazil and Bolivia in the New World, in south-western Europe and in South Korea.

The name of the family Plethodontidae comes from the genus red-backed salamander, Plethodon, that comes in turn from the Greek “πλῆϑος” (pléthos) multitude and “ὀδούς” (odous) tooth, hence with many teeth, whilst the specific epithet cinereus, of ashy colour in Latin, refers to the livery.

The genus Plethodon is endemic to North America (Canada and USA) and counts nowadays, in 2022, 56 described species.

Plethodon cinereus is a species endemic to North America. Its range crosses 5 Canadian provinces, of which the Québec and the Ontario delimit the northern boundary, and 23 American states, mainly following the East Coast and slightly centralizing, with its southern limit placed between North Carolina and Tennessee.

Despite the big range, subspecies have not been found, also because some, like the Southern red-backed salamander Plethodon serratus Grobman, 1944, once considered as subspecies have been raised to the rank of species.

The Red-backed salamander is well distributed from the sea level up to about 1500 m of altitude.

It is a mainly terrestrial urodele that can be met in woody areas under rocks, trunks, barks and other types of debris.

Though terrestrial, also this salamander prefers woods with high humidity rates  and usually abandons its shelter only in humid days or mainly during the night, to avoid the desiccation of the skin that must be constantly humid in order to allow the breathing. Like all Plethodontidae this function is wholly entrusted to the skin, as there are no lungs. 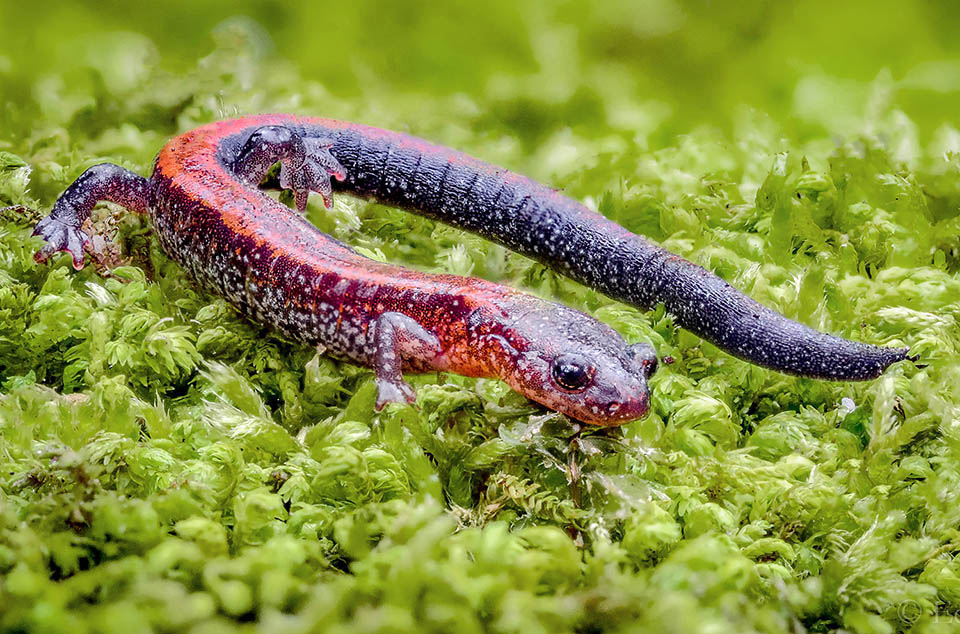 From some studies it has been found that it prefers the woods of maple or the beech forests, even if it’s present also in other woody typologies.

The diet of Plethodon cinereus, helped in its foraging by the rains, is mainly formed by invertebrates especially those living in the litter, such as mites, ants , springtails and termites. The predators of the Red-backed salamander are numerous. Among these usually stand small mammals, snakes, birds and big salamanders, like Pseudotriton ruber.

Like other Plethodontidae, also the red-backed salamander does not display a big morphologic diversity, present, instead , at genetic level with an important diagnostic value.

The dimensions of Plethodon cinereus are modest, around 5,7 to 10 cm, tail enclosed. 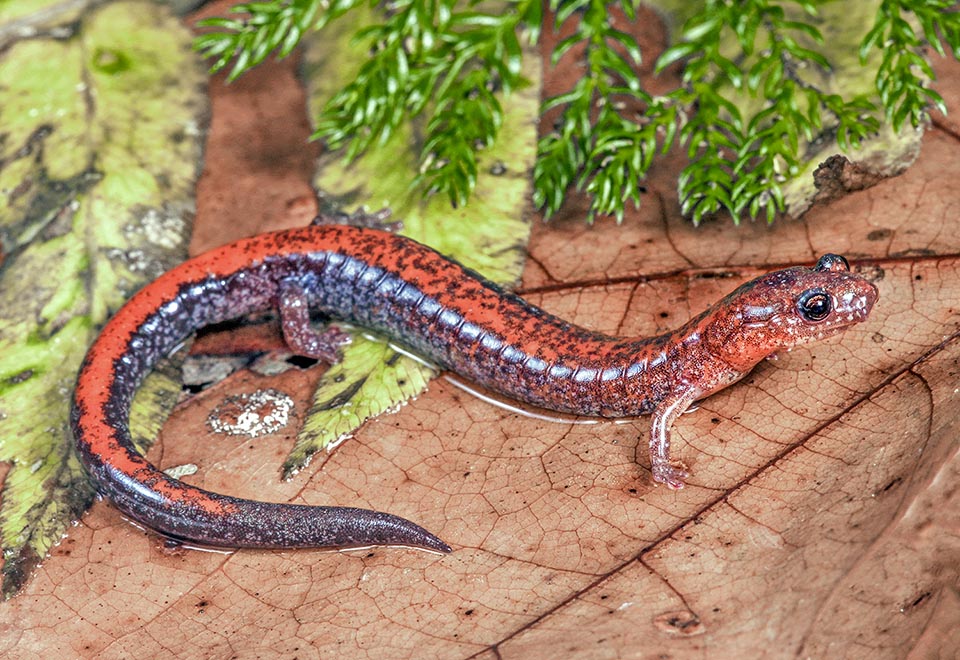 It doesn’t exceed 10 cm, tail included, and usually leaves his little den only by night or when it rains, hunting small invertebrates like mites, ants, springtails and termites © Jake Scott

The adult males are slightly smaller than the females, with an average of 73 millimetres, compared to the 78 millimetres of the female companions.

The body is long and slender, dorsally flat and rounded on the sides. The tail has a circular section for almost all its length and can regenerate.

It has 17-20 rib groves and has small legs, with short and thick toes.

The red-backed salamander presents polymorphism with two variants of colour: lead and red back.

The red-backed variety is characterized by a vast dorsal band that runs along the midline from the head up to the tail. The colour of this band may vary from pale grey or opaque yellow to pink, to brick red and to bright red, and are frequent small black dots. 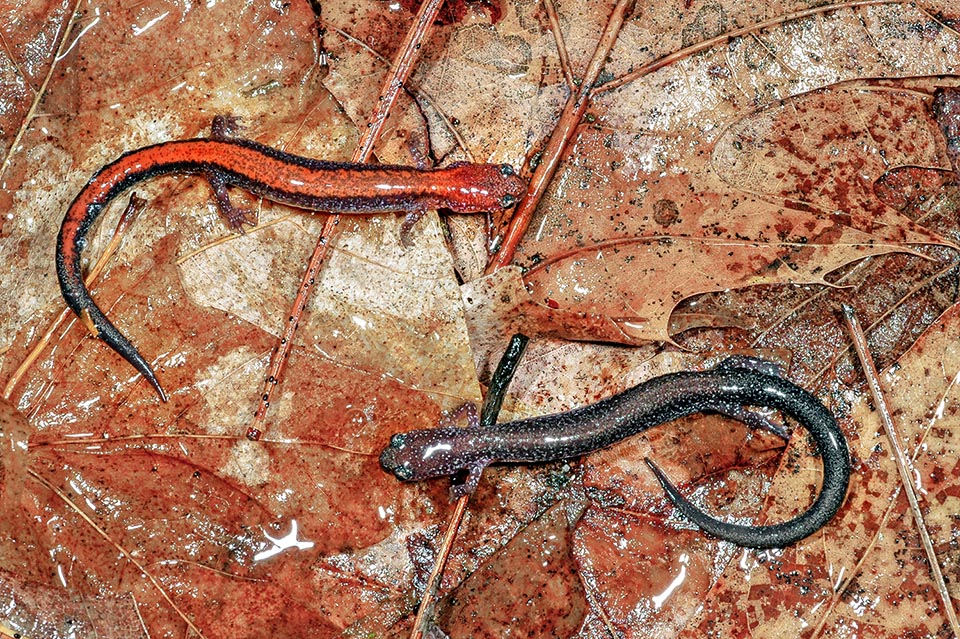 It presents, after the zones, with two colour variants: back red and lead, whilst the sides are always black or dark grey with paler mottlings and shades on the belly © Daniel Hocking

The sides of the animal are black or dark grey, turning towards a lighter and more mottled colour as you get closer to the belly, strongly mottled of white and grey.

In the variety with lead back the dorsal band is missing and the colouration is almost uniform, from black to dark grey, with legs and had usually paler.

The most accredited theory about this polymorphism is based on the temperature and, more generally, on the climate of the habitat, potential sources of selective pressure.

They are territorial and jealous. Before mating females see from the odour if the pretender has been with another, and then it’s the male to punish the cheater © Judy Gallagher

The red-backed salamander is an oviparous species. The reproductive period of these salamanders is in autumn or in spring.

The choice of the female for the male is influenced by its body size and by the territory it controls: the larger and richer in prey, the more attractive the pretender is, but is considered the absence of other females’ odours on the skin. The couple in fact tends to have monogamous habits.

In turn, the males display punitive attitudes towards a socially polyandrous female partner that, for instance, looks for food with another male.

The male can notice it from the presence of pheromones of another male on the skin of the female. These punitive postures go from simple menacing positions to biting. 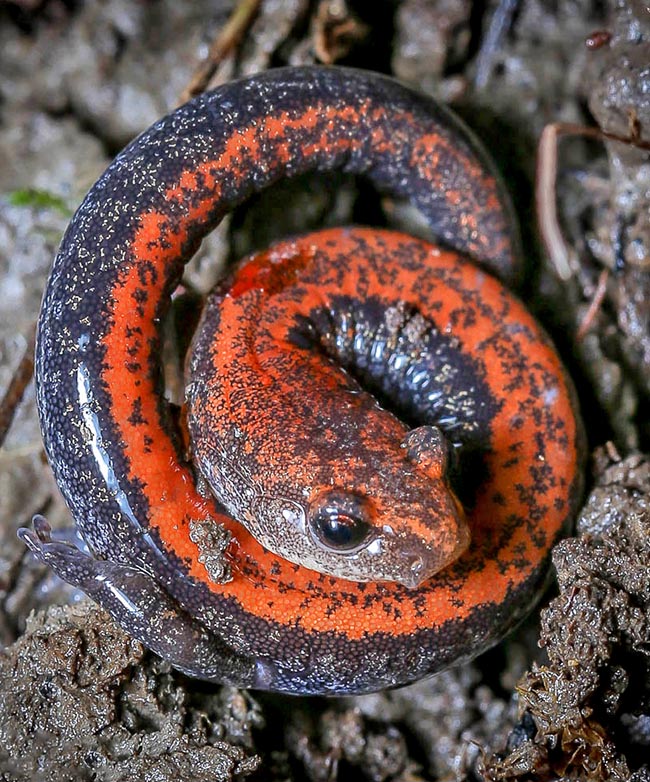 Female curled up in a defensive position. In this way they protect the fecundated eggs until hatching © Dave Huth

The male as well as the female do protect their territory, which despite being a very expensive action, brings several benefits to both.

The spawning usually occurs in late spring, or in early summer.

Like all its congeners also this species lays the eggs in terrestrial cavities. The female guards the eggs for the whole time, and brood takes place between 6 to 8 weeks, usually by late august or early september. During this period the female does not nourish itself effectively, but only occasionally.

The females cannot reproduce all the years, but usually do it in alternate years.

Like other Plethodontidae, for instance Hydromantes italicus and Hydromantes strinatii, a real larval stage is absent, as upon hatching the newborns have already absorbed the gills and therefore they are already suitable for terrestrial life. The size of the kids is about 22 mm.

Before dispersing they spend 1 to 3 weeks in the nest with the mother. The sexual maturity of the individuals of this species is reached when about 2 years old.

Besides the behaviours concerning reproduction and territoriality, this species also presents anti-predatory strategies that differ depending on the variety.

The variety with lead back tends more frequently to run away in front of a predator, whilst the red-back phase tends to keep motionless, and to flaunt its aposematic colouring, formed by a lively contrast of colours indicating often in nature the presence of poison or of toxic substances. Another common answer to the production attempts, is the autotomy, that is the loss of a part of the tail.

The red-backed salamander, like many of its congeners, presents a Homing behaviour, that is the tendency, as occurs for many species, to return to familiar places, like nests, even if dispersed at big distances.