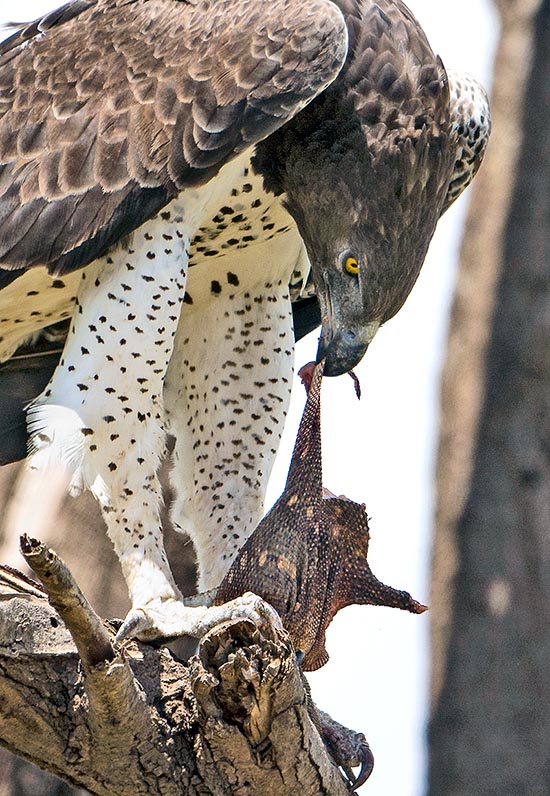 The Martial eagle (Polemaetus bellicosus Daudin, 1800) is one of the strongest and most powerful of the winged world belonging to the very vast order of the Accipitriformes and to the family of the Accipitridae.

Already from the names themselves, either scientific or vulgar, we can imagine how much power and strength the classifier did want to indicate with this name, emphasizing characteristics that might be distinguished among its alike.

The etymology of the scientific name is well clear.

Polemaetus from the Greek “polemos” = battle and “aetos” = eagle, indicates it explicitly as a strong and pugnacious raptor.

To this they have then added bellicosus = bellicose, aggressive, martial, as if the first epithet alone would not be sufficient to indicate the characteristics of this eagle.

Actually, it is sufficent to observe it on the field when flying or, even better, when hunting, for realizing the reason he who has classified it has used these terms.

By sure, is the queen of the savannah even if, objectively, its size is not so exaggeratedly different from the large eagles sharing its territory. The Black eagle (Aquila verreauxii) and the Crowned eagle (Stephanoaetus coronatus) are at times slightly bigger of some centimetres but have conducts well differing from our Polemaetus bellicosus.

Perhaps this title has been rightly earned on the field and also because of the courage it shows in assailing preys often not even aproached by other members of its group.

Conversely, with the two aforementioned raptors it shares the powerful claws that seem even outsized seen the size.

Very long fingers, very sharp claws among which a some cm long talon that is practically the knife used for slaughtering the victims.

If we wished to make a hypothetical twinning between raptors of this type, we might say that this eagle is the equal of the South American arpy eagle (Harpia harpyja), of the Asian monkey-eating eagle (Pithecophaga jefferyi) and of the Australian wedge-tailed eagle (Aquila audax) all birds that have entered the collective imagination for their strength and ferocity. 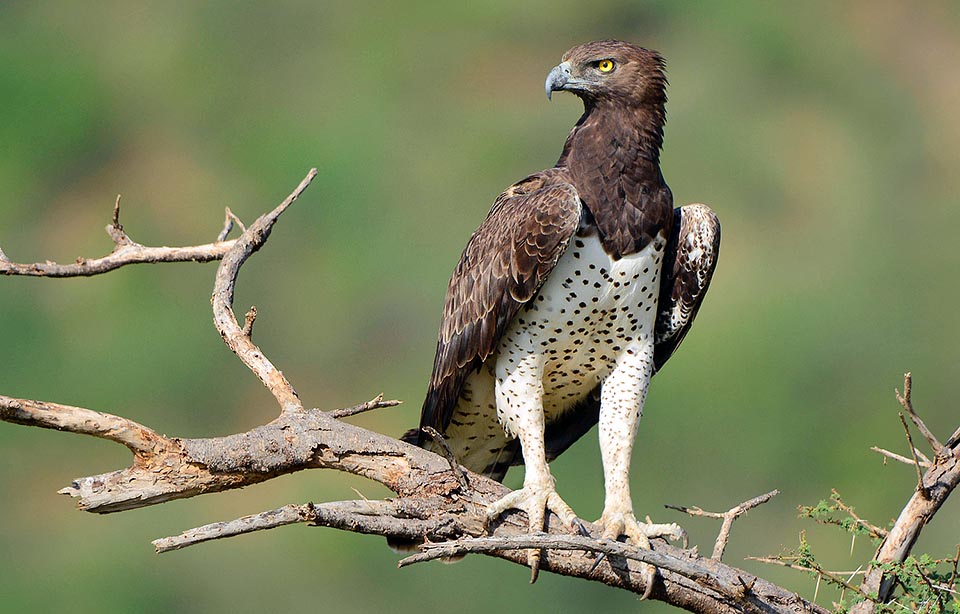 Majestic flying and on soil with its stiff and defiant posture, is unrivaled in the savannahs, where often controls a thousand square kilometers territory © G. Colombo

Anyway, due to the dimensions among all the eagles of the world, the martial stands in the very first positions.

In Europe is called Martial eagle in English; Kampfadler in German; Aquila marcial in Spanish; Aigle martial in French; Aguia marcial in Portuguese and also in these cases the concept mentioned above is well confirmed. 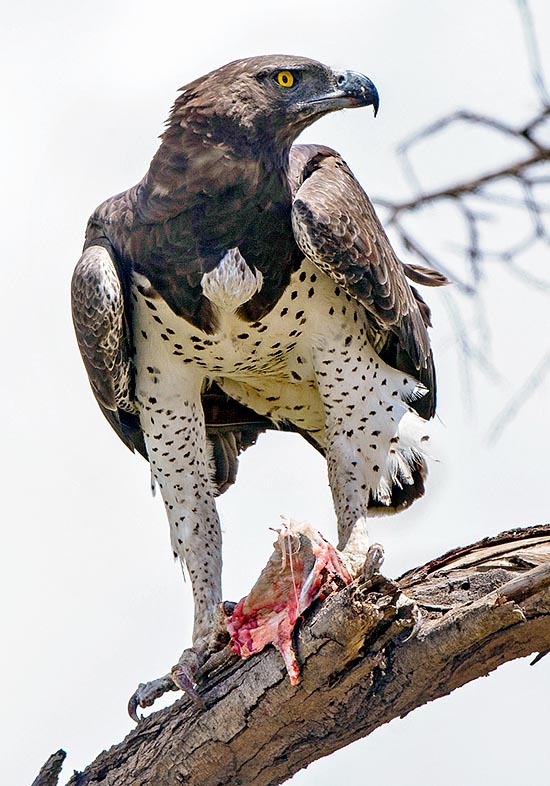 Long fingers, very shar claws, with the heel, like a knife, to slaughter victims © G. Colombo

The martial eagle is diffused in all the African continent south to the sub-Saharan belt and contrary to other African eagles that are often present also outside of the traditional range, it lives only in this continent as does not have colonies in any other, even neighbouring area.

It is also the only species assigned to the genus Polemaetus.

Though widely diffused in its range, is never present in great number and is to be considered locally scarce and even rare in some areas.

It is more present in the south of the continent especially in the parks and in the protected areas where, besides the abundance of food, it enjoys that peace that often is impossible to find in the anthropized zones.

In some overpopulated countries or with territories densely exploited by man, the population of this eagle results being strongly decreased and often by this time eradicated from those that were its historical ranges.

It is a solitary eagle that occupies and defends a very vast territory that may exceptionally reach the 1000 km2 and this is another of the reasons that justify its never abudant presence.

It mainly lives in steppe and arid zones with forest cover of acacias and prickly bushes but always sufficiently sparse to allow its ample hunting movements.

It also frequents the woody sides of hills and margins of forests but which allow to enjoy a position from which it gets a vast vision of the surrounding territory.

The chosen area must also put in evidence the presence of animals and birds in good quantity, their usual preys and this food availability is a valid indicator of the presence or of the scarcity of this raptor.

The usual preys of this eagle are many and of various size. Usually it nourishes of big terrestrial birds, up to the dimensions of a Kori bustard, rabbits, snakes and monitor lizards but often attacks and kills easily antelopes of even remarkable size, such as young impalas and springboks. 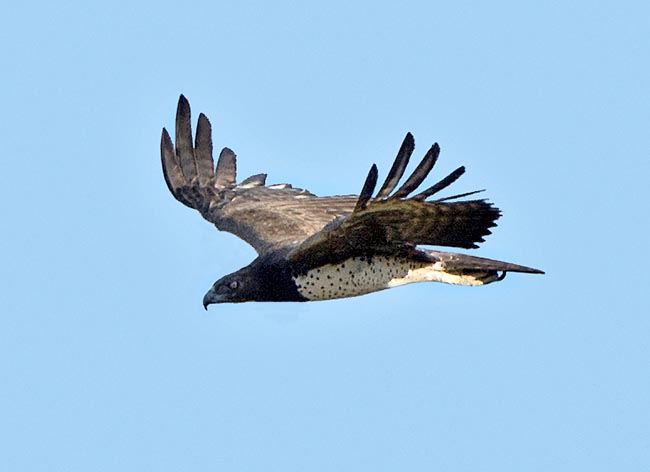 Exceptional vision. Swoops from above and blocks the prey on the soil with the claws: big birds, reptiles and mammals, even young gazelles and antelopes it eats on the spot while vultures and hyeas keep respectfully far © Gianfranco Colombo

The hunting is done with slow and majestic flying over from considerable altitudes seen that this bird is considered as being one of the eagles with most powerful eyesight. It is thought that it can have a visual capacity of more than three times greater than the human one.

Once sighted the preys throws itself on it with extreme agility immobilizing it on the soil with its powerful claws. Often the victim is weighing so much to be consumed directly on the seizing place and at times, when very big, can be devoured in several days.

It does not have potential aerial foes and no eagle or vulture therefore dares to have an argument with this raptor.

It has been seen sometimes while predating also jackals and other animals who did approach its prey.

It lives under the 3000 m of altitude with preference for habitats averagely located at 1500 m.

The martial eagle is a strong and powerful raptor. It is up to 90 cm long, weighs more than 5 kg and has a wingspan that may exceed the 250 cm. Therefore, there is no doubt that a bird of such a shape may go unnoticed in the African savannahs. 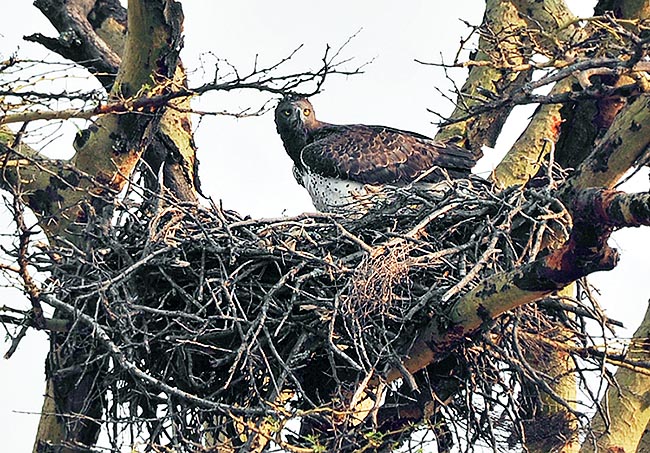 The nest, even 2 m broad on top of isolated trees, is used, with modernizations, for more years. The pairs are faithful for the life and the female lays 2 eggs. There is no cainism as the food is not missing with such parents © Gianfranco Colombo

It has a majestic flight even if heavy but reveals its flying capacity when for many hours it is seen flying up in the overhead skies.

It cannot be ignored even if lurking, seen its strutting and swaggering regal silhouette, like an eagle, its barely hinted crest flapping in the wind and its whitish colour that makes it appear from afar as one of those signals that are placed on top of poles or of trees to indicate the presence of airfields or of small villages.

The adult livery shows a totally white dotted by small dark, perfectly rounded spots, chest, more numerous in the female, from the blackish neck and head equipped with two yellow fulminating eyes and the upper cover of a compact bluish grey colour.

On the head has a hint of tuft that, though reduced, results well visible.

The tail is crossed by black stripes on paler backgorund. The tarsi, then are completely featherd and always white and the legs extremely strong with very elongated fingers. The claws are impressive too. The beak is finally a deadly war machine. A six centimetres pincer, hooked and pointed, is also highly sharp so much to be able to open and dissect skins a times extremely hard and coriaceous like those of the monitor lizards and of big reptilians. 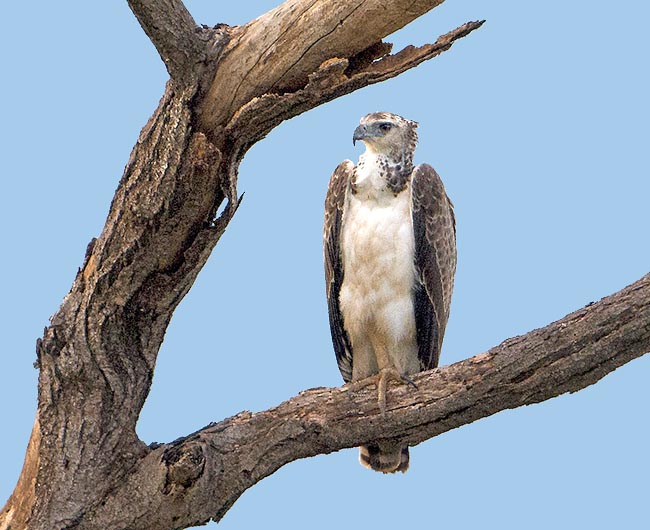 The young, mom and dad dependant for various months, also after the first flight, have white belly and pale head © Gianfranco Colombo

Also the young has a pale colouration on the chest and for some years, up to the maturation which takes place by around the sixth year, keeps also the head and the neck of the same colour.

The martial eagle may be at times mistaken with two eagles present in the same range, the Black-chested snake eagle (Circaetus pectoralis) and the Crowned eagle (Stephanoaetus coronatus) but a careful analysis will allow to verify that the first, though perfectly equal in the drawing and the colour, has remarkably smaller dimensions whilst the crowned will result fairly darker on the chest.

This eagle, not having ay enemy at all, places the nest on isolated trees, usually thorny and inaccessible from the soil and in well visible position like if it defies the nature and possible foes with its fearless strength.

Sometimes, it also uses rocky gorges in position dominating the underlying territory or on very high trees at the margins of the forests.

The nest is a vast platform that may exceed the diametre of two metres therefore needs a support and a base of very robust and solid branches for supporting the weight of the structure itself as well as that of the parents plus that of the chicks that will come to life. It is often used again for more years after renovations and often expansions in the size. The nidification occurs in more periods of the year depending on the availability of food and the climate situation. It lays two very white eggs it hatches for 7 weeks and the chicks remain in the nest up to additional 100 days from the opening of the eggs. 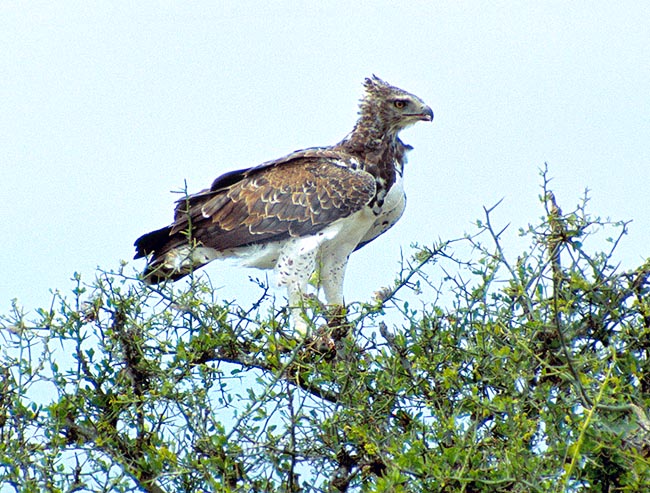 By the first flight the eaglets are still depending from the parents for a good number of months, reason why the nidification has never a regular annual course. The opportunity to be able to access to large preys and the consequent possibility to provide the nest of a good quantity of food usually allows the broods to avoid instances of cainism and so, usually, the two siblings are both able to begin flying.

The species is monogamous and the pairs remain faithful all the life long. This eagle may live up to 25 years.

Athough not common, the Polemaetus bellicosus enjoys a good status of conservation. However, purely as a precaution, seen that its scarcity is possibly genetic and natural, it has been recently placed among the vulnerable species.