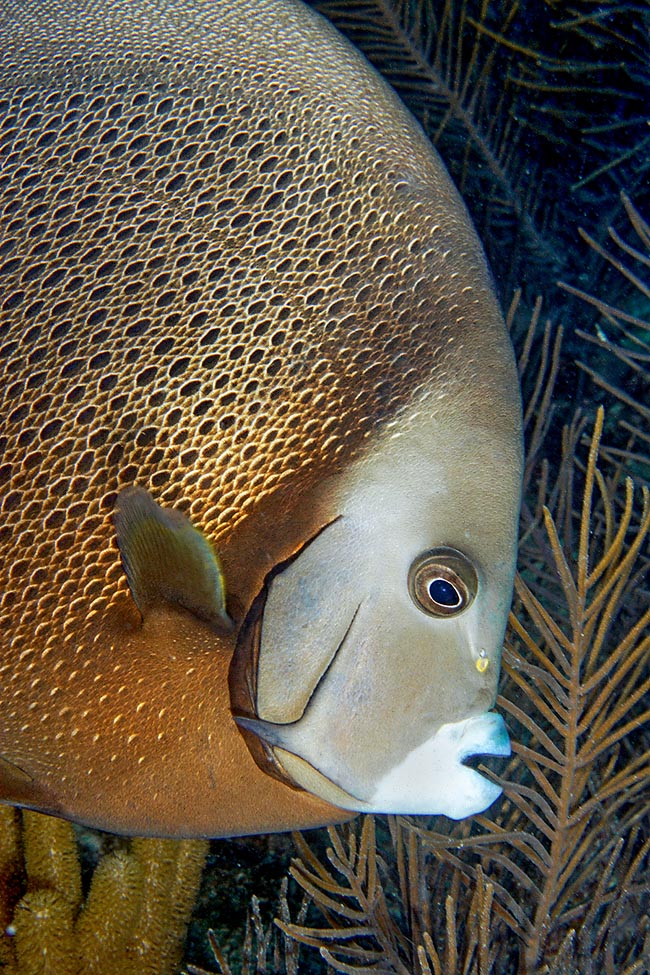 Pomacanthus arcuatus lives along the American coasts of western Atlantic, from the New England to the Brazil © Keoki Stender

Pomacanthus arcuatus (Linnaeus 1758) belongs to the class of Actinopterygii, the ray-finned fishes, and to the order of Perciformes.

Commonly known as Grey angelfish, it is one of the biggest members of the family of the Pomacanthidae, that nowadays counts 8 genera and about 90 species.

The name of the genus Pomacanthus comes from the Greek “πῶμα” (poma) = cover, and ἄκανθα” (akantha) = spine, with reference to the showy protruding spine placed at the base of the operculum and characteristic of all angelfishes, a sort of a “cover” protecting the gills.

The specific name arcuatus, in Latin “arched”, reminds the presence in the young individuals of yellow vertical arched bars, not to forget the general profile of the adults, curved like an arch.

The Grey angelfish lives along the American coasts of western Atlantic, and like the analogous Pomacanthus paru, bears the cold better than the other congeners.

In the USA, in fact, we find it starting from the North England waters. It is then at home in Florida, in the Gulf of Mexico and in the Caribbean, reaching southwards, in Brazil, Rio de Janeiro. Recently, it has been introduced in Bermuda.

It lives in madreporic environments between 2 and 30 m of depth. The adults frequent the steep sides of the reefs, rich with cracks where they can rapidly go, flat as they are, to spend the night and to avoid the predators.

Conversely, the young grow in shallow waters, hidden among the corals and in the seagrass meadows.

Pomacanthus arcuatus can reach the 60 cm of length with a weight of 1,8 kg, even if, usually, slightly exceeds the 45 cm, and when 23 cm long is already able to reproduce.

The body is flat, discoidal. The mouth, oblique and fleshy, is relatively small, with protruding lower jaw and combed teeth. There is only one big scaly dorsal fin, rounded at the apex, with a characteristic arcuate filament that over time exceeds the caudal fin in length. It counts 9 spiny rays and 31-33 soft. 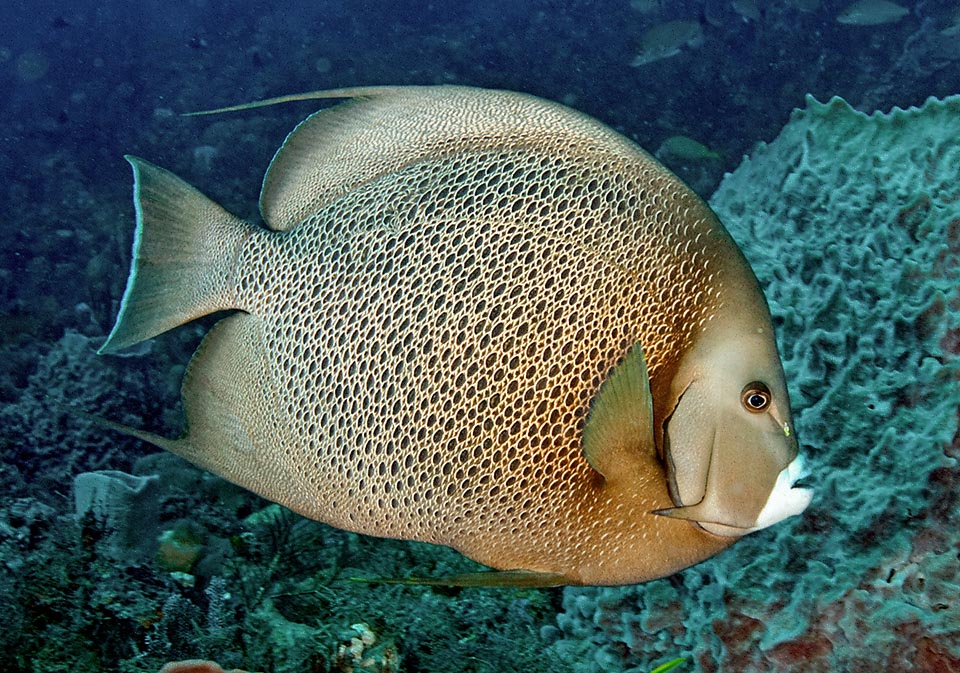 Commonly known as Grey angelfish, it can reach 60 cm of length and 1,8 kg of weight, even if the normal size is of about 40 cm and can reproduces starting from the 23 cm © Keoki Stender

Head apart, the body is covered by large ctenoid scales, that is with serrated edges rough to the touch. They are grey or brown at the centre, with a clear border that draws an elegant pattern on the sides. 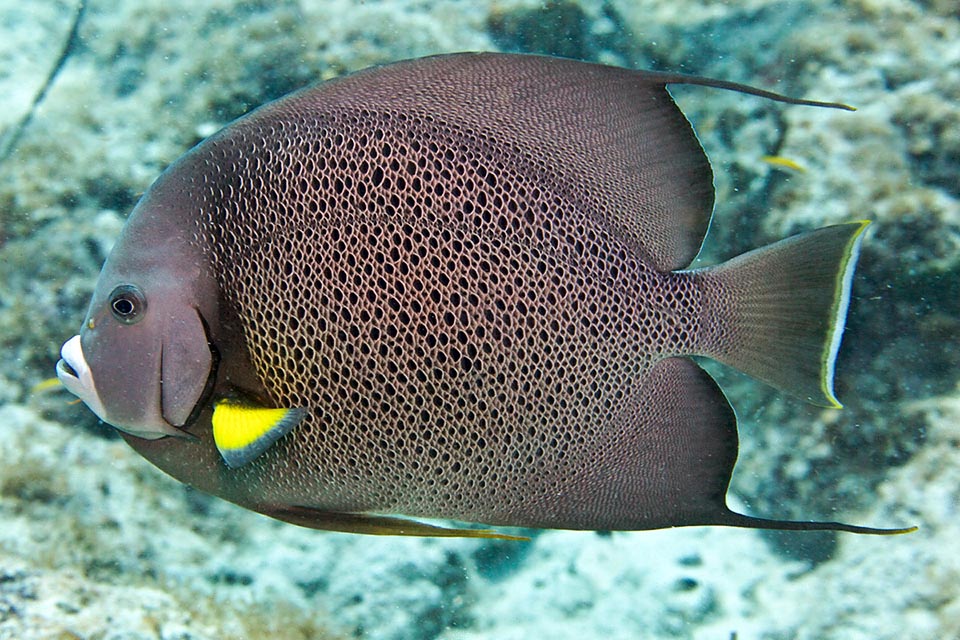 Lips and chin are white, and the pectoral fin is yellow, but only on the inner side. This is one of the elements distinctive with Pomacanthus paru, that has, in return, on the pectoral ones a showy yellow bar at the base of the outer side.

Moreover, in this species the eye is surrounded by a yellow ring like the border of the scales on the background colour tending to blue, so much that, with a thought to the French flag, in the US it is commonly called “French angelfish”. Also the dorsal filament is finally yellow like the long spine of the operculum, that in Pomacanthus arcuatus is grey. 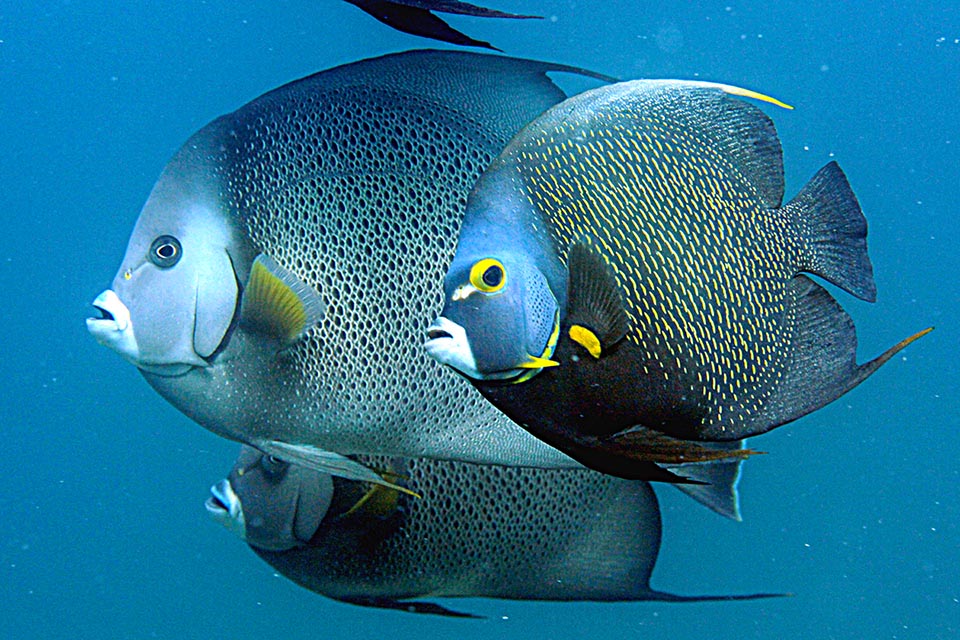 They swim alone, paired or in small schools mixed at times. Here two in comparison with the analogous Pomacanthus paru on the right. In this species the yellow spot has become a bar out the pectoral, the eye is bordered yellow and also the spine on the operculum is yellow, like the edge of the scales emphasized by bluish background colour © Kevin Bryant

Growing, the yellow bands of the Grey angelfish shorten and fade to become whitish in the intermediate livery. 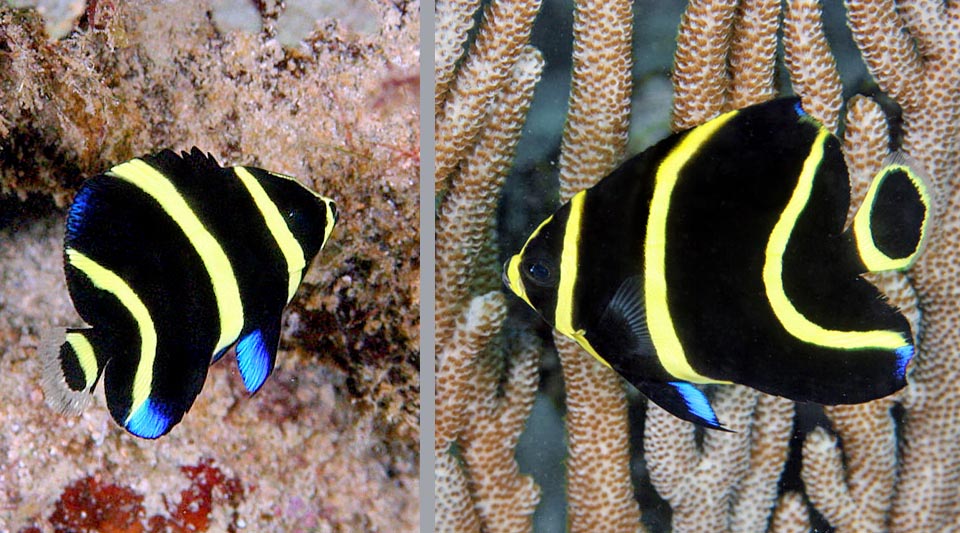 Conversely, the first livery in the young of the two species is almost the same. In Pomacanthus paru, right, the yellow bar of the caudal fin forms a ring isolating a black spot, whilst in Pomacanthus arcuatus, left, it’s a small bar. Moreover, in the Grey angelfish the thin yellow front band continues also on the upper lip © Kevin Bryant

The Grey angelfish is omnivorous. It mainly eats sponges, but also tunicates, zoantharians, gorgonians, hydroids, bryozoans, and small benthic animals, without ignoring the algae and the marine phanerogams.

In their early days, the young individuals behave as cleaner fishes, freeing various fish species from the ectoparasites. 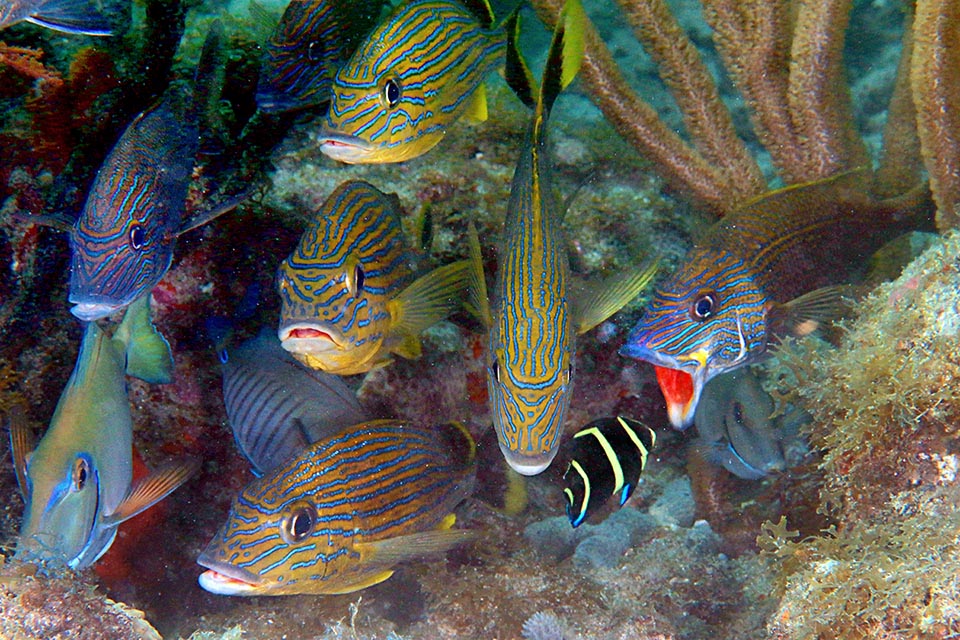 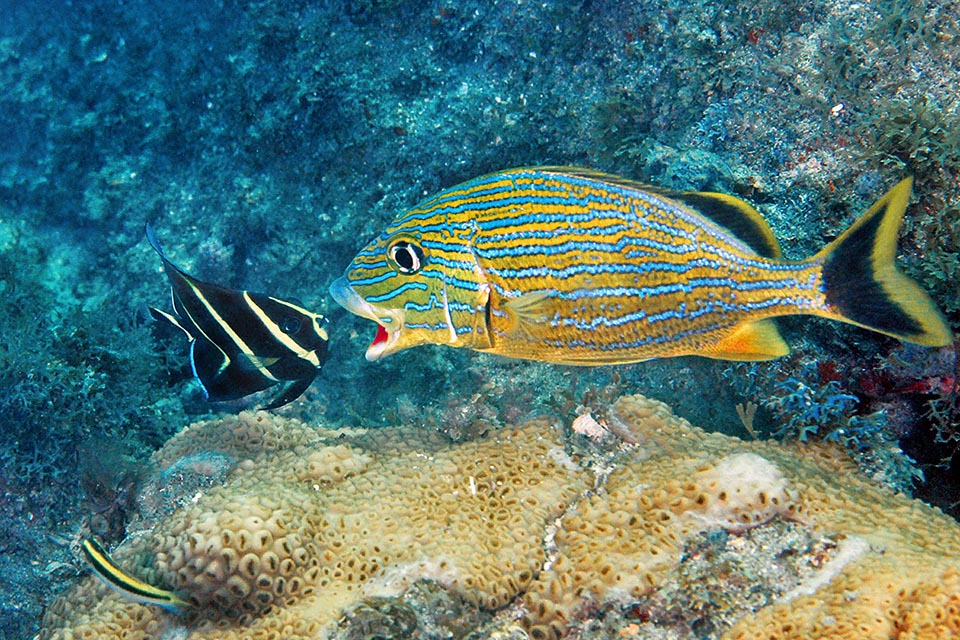 It has found a client who does not hesitate to show him the mouth inside. The young looks closely, professionally © Kevin Bryant

Like Labroides dimidiatus and analogous species that nourish the whole life round in such a way, they move to the “cleaning stations”, fixed places where the big fishes, often with the mouth wide open, lose their aggressiveness and queue patiently to be cured, as if they were in a dental or dermatological cabinet.

It will be the contrary when adults. It will be their turn to get the skin cleaned by the old colleagues at work, such as Bodianus pulchellus or Bodianus rufus, also cleaners when young, to which adds, when resting on the seabeds, a slender small shrimp of the Caribbean islands, the tiny Ancylomenes pedersoni, less than 3 cm long, that nourishes of fishes’ external parasites. 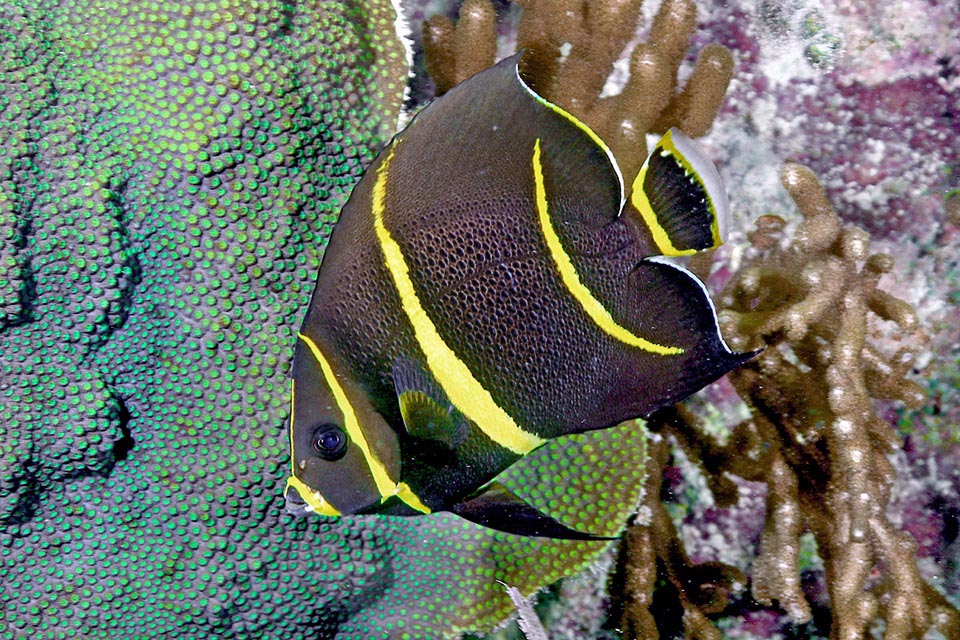 Here a bigger young. The light blue dots have disappeared, the yellow bands are proportionally reduced and appears the pattern of the scales © Keoki Stender

Pomacanthus arcuatus is not afraid of man and often lets itself be approached and photographed by the divers who find it mostly alone, paired or in small groups, at times mixed with Pomacanthus paru.

Confident and friendly, this nice fish often ends up in the pot, being its flesh excellent, even if at times are reported instances of ciguatera, a serious food poisoning connected with the presence of poisonous organisms in their diet. 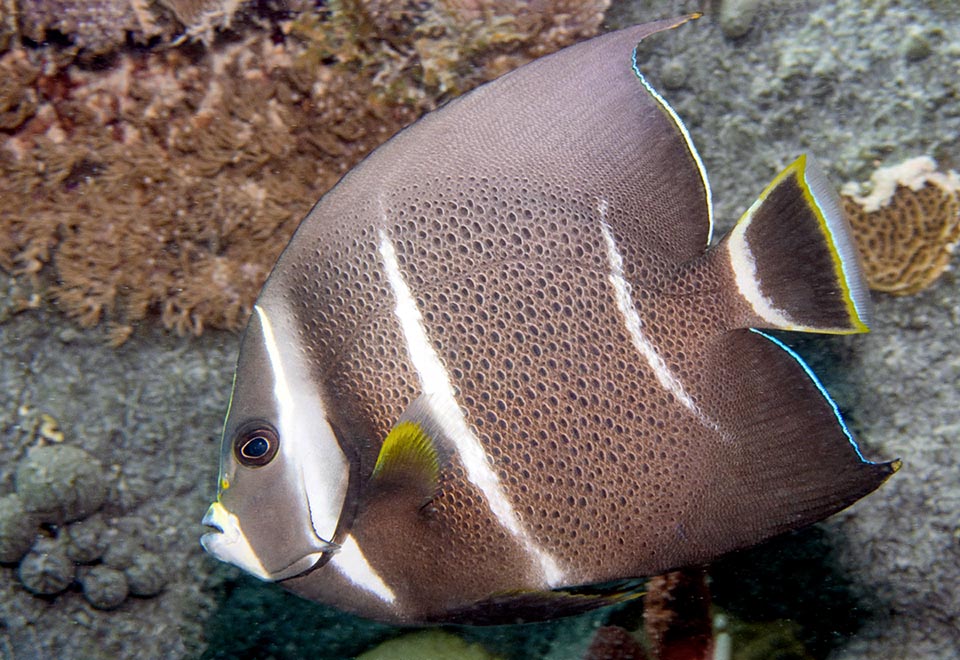 Even if it has been bred and reproduced in captivity, the Grey angelfish moreover is very fished for the aquaria, so much that in Brazil, where the numbers appear remarkably reduced, cannot be exported more than 3.000 specimens per year.

Pomacanthus arcuatus reproduces, depending on the zone, between April and September.

Usually, spawning takes place at dawn. The pairs, after a ritual made of short pursuits, ascend together to the surface releasing eggs and gametes. 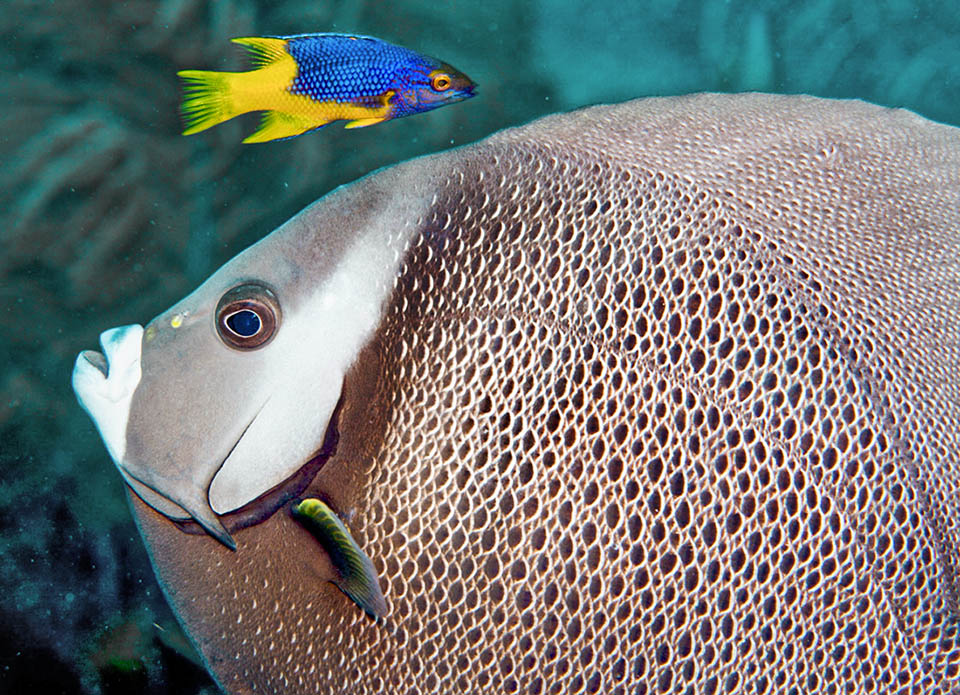 Here in a sort of historical nemesis, an adult arouses attention of a Bodianus rufus, who eats, in turn, when young, the ectoparasites © Allison & Carlos Estape

Then they separate and reach the seabed again to repeat the operation. Every time, the female entrusts to the currents 25.000-75.000 eggs, almost 1 mm broad, that will hatch 15-20 hours after the fecundation.

The larvae often grow at the shelter of floating algae and go down to the bottoms only when 15 mm long. The resilience of the fish is low, as more than 14 years are necessary for doubling the populations decimated by the events, but in 2009 it was inserted in the Red List as “Least Concern”. 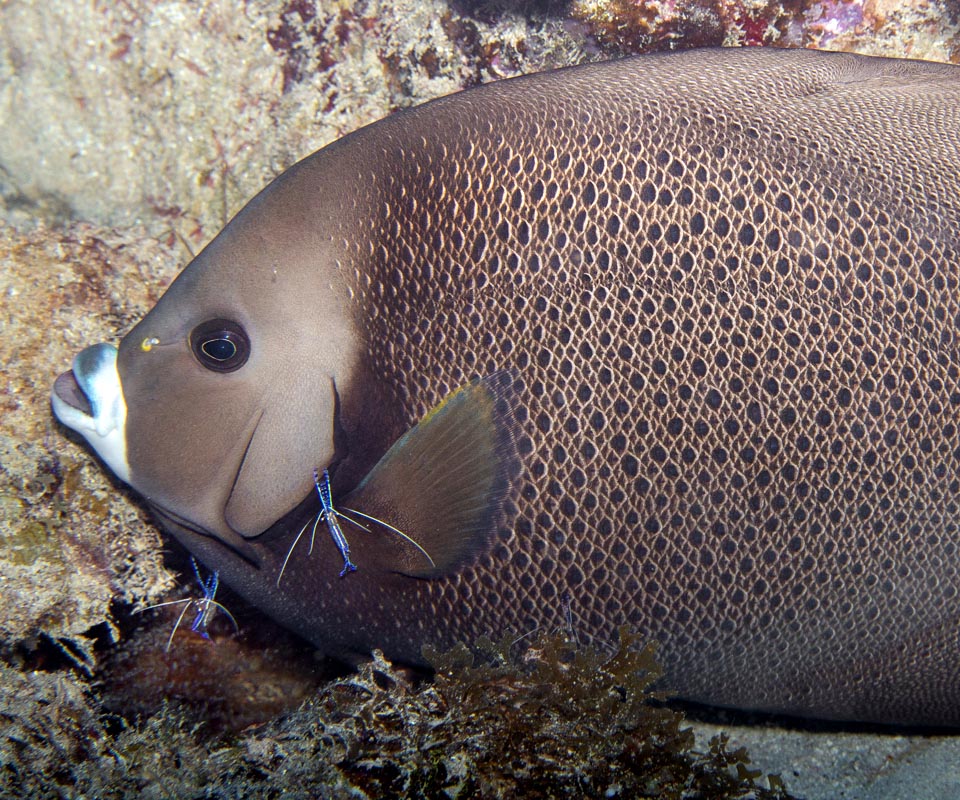 Pomacanthus arcuatus was last modified: May 3rd, 2022 by Peppino