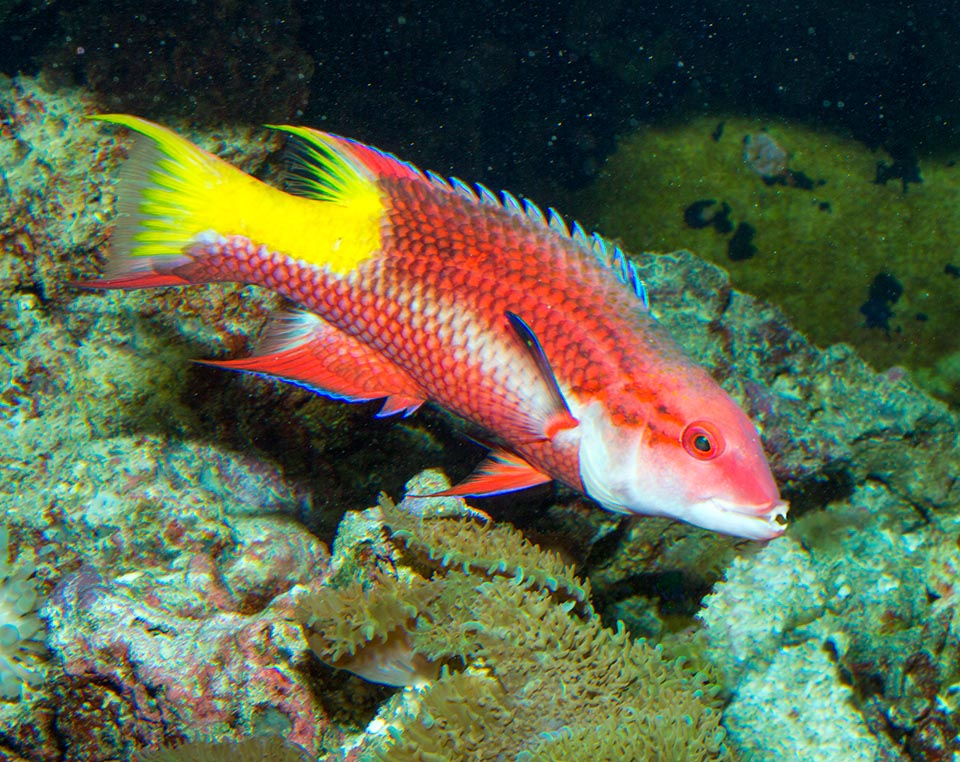 Multicoloured denizen of Caribbean, present also in São Tomé Island near Africa, Bodianus pulchellus can be, in the male, 28,5 cm long © Giuseppe Mazza

The Bodianus pulchellus (Poey, 1860) belongs to the class of the Actinopterygii, the ray-finned fishes, to the order of the Perciformes and to the vast family of the Labridae counting 71 genera and 549 species. Fishes often multicoloured, with surprising changes of sex and of livery. Fishes at times of large dimensions and weight like the Napoleon wrasse (Cheilinus undulatus), but also many small fishes of about 10 cm, such as the picturesque Sixline wrasse (Pseudocheilinus hexataenia), frequent in the domestic aquaria, or the less spectacular Five-spotted wrasse (Symphodus roissali), frequent in the Mediterranean and in the fish soup.

The name of the genus Bodianus, assigned to about 30 species, comes from the Portuguese term “bodiano, pudiano” = shyness, due to the often reddened head, as if for shame, that we note in these fishes. The specific term pulchellus is the Latin diminutive of “pulcher” = nice, with reference to its colourful livery. It is, in short, suitable for a fish, maybe not beautiful, but still “cute”.

The Bodianus pulchellus basically lives in the tropical waters of the western Atlantic Ocean, excepting the island of São Tomé, located in the eastern Atlantic in the Gulf of Guinea, maybe because of the currents rotating around the Sargasso Sea. 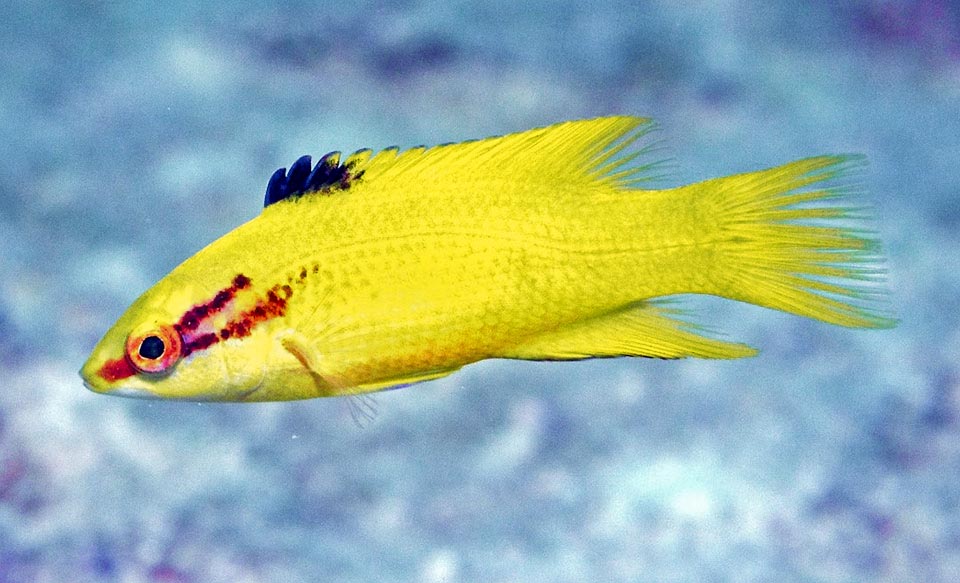 Livery changes with age. Initially young are all yellow with a black dot on the first 4 rays of the dorsal. Then, starting from head, they begin colouring red © Allison & Carlos Estape

Hence, indicatively, we find it starting from the Bermuda Islands, South Carolina, Florida and Bahamas, all over the Caribbean area: USA, Mexico, Belize, Guatemala, Honduras, Cuba, Haiti, Dominican Republic, Puerto Rico, Virgin Islands and then downwards up to the coasts of Venezuela, Guianas and in Brazil up to the out-of-the-way Archipelago of Trinidad and Martim Vaz, a Brazilian Navy base at about 1200 km of distance, eastward, from the coast of Espirito Santo.

It goes swimming among madreporic formations and rocks, usually at 15-24 m of depth, where the water is relatively warm, at 24-28 °C, but it has been found even at 120 m. 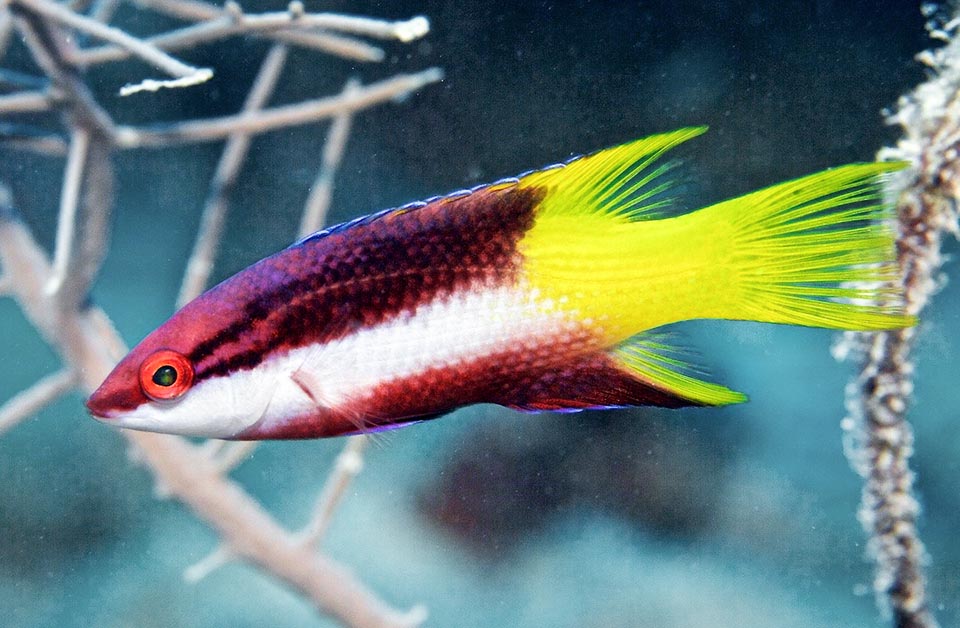 Here the intermediate livery. The red, present on back and belly, turns purplish with a showy longitudinal white band © Allison & Carlos Estape

Apart the bigger size of the males, we do not note any social dimorphism in the livery. As often is the case in the world of the Labridae this is a hermaphrodite proterogynic species, that is, with females transforming, while growing, in males, and therefore it is obvious that these ones are bigger. Conversely, there is a major difference between the juvenile livery and the adult’s one.

At first, the young are uniformly yellow with a showy black spot on the first 4 spiny rays of the dorsal fin. Then, starting from the head, they begin colouring of red. Close to the eye we note two red lines that widen with purplish hues to finally cover the upper part of the body and most of the dorsal fin. In the same time, it covers with the same colour also the belly with most of the anal fin, so that, in the end, in the middle remains a white longitudinal stripe. In the adult livery this white stripe gets increasingly thinner and the red-purplish colour turns vermillion, spreading also on the lower part of the caudal fin. There are no more black spots but a small showy one that takes form towards the upper margin of the pectoral fins.

The Bodianus pulchellus nourishes of small crustaceans, sea stars, sea urchins, small worms, bivalve mollusks and gastropods, without ignoring the small fishes that come too close. When young, it behaves like a “cleaner labroid” freeing the big fishes from the ectoparasites. 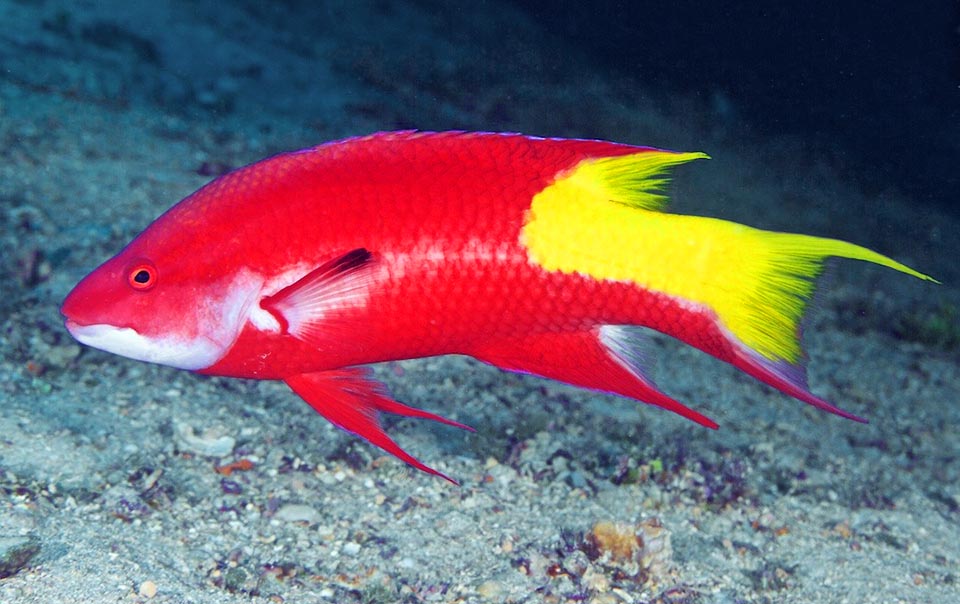 In adults the pale band almost disappears and colours are lively. It eats crustaceans, echinoderms, mollusks, small worms and small fishes. It is not an endangered species © Allison & Carlos Estape

The males control a small territory with some females, coupling in turn with the one ready to spawn. The eggs are fecundated while swimming coupled and rise floating to the surface to be then dispersed by the currents. At 26-27 °C, the larvae hatch usually on the following day. In the 5-6 mm larvae the lower lip is red and very protruding, it then regresses and disappears when about 20 mm long, when the body begins to get a yellow colouration.

Along the Brazilian coasts, they have found hybrids with the Bodianus rufus, quite similar and with an often overlapping distribution area.

Because of its beauty, the Bodianus pulchellus is sometimes a guest of the aquaria in such a point that in 2007 Brazil had exported more than 3.500 of them. It is not however suitable for the domestic ones as it needs big pools and is very sensitive to the parameters of the water. The resilience is in any case good, with the possible doubling of the population in 1,4-4,4 years, and these collections do not nowadays (2020) affect the vulnerability of the species that marks 33 on a scale of 100.

Bodianus pulchellus was last modified: May 18th, 2020 by Peppino