Known as Maroon crownfish or Spinecheek anemonefish, the Premnas biaculeatus (Bloch, 1790) belongs to the class of the Actinopterygii, the ray-finned fishes, to the order of the Perciformes and to the family of the Pomacentridae, that counts more than 400 species and 29 genera among which the Premnas, just created for it, seen that it is the only one crownfish with spines on the opercula.

The genus Premnas, assigned in 1829 by Cuvier, who, while reorganizing the group, changed the original name of Chaetodon biaculeatus given by Bloch in 1790, is that in Greek of an indefinite fish, “πρέμνας”, that literally means trunk, slip, big branch, stem, maybe due to the appendage it has on the cheeks.

The specific name biaculeatus = with two spines in Latin, refers to the two showy spines this fish has on the operculum. 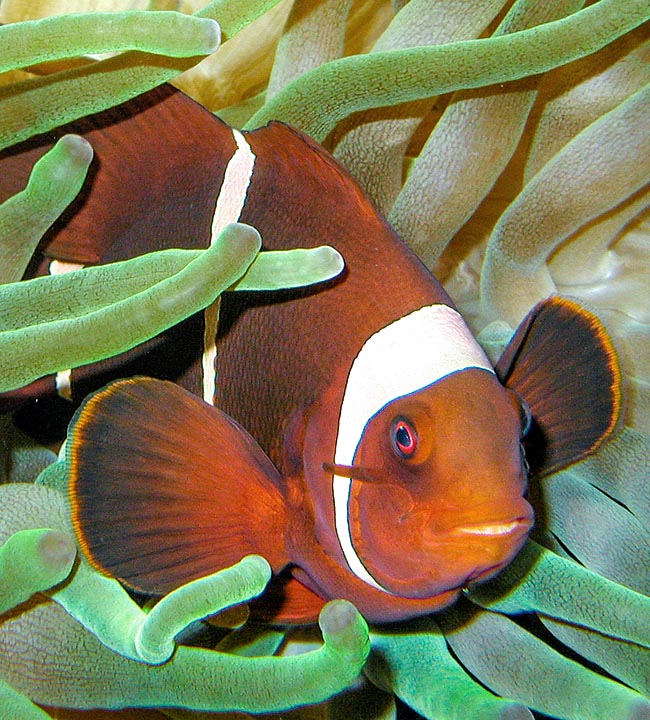 The Premnas biaculeatus is the biggest extant clownfish, mainly in symbiosis with the Entacmaea quadricolor © Giuseppe Mazza

It lives in the calm waters of the lagoons and on the inner side of the coral reefs, never under the 16 m of depth, where it finds the Entacmaea quadricolor, a symbiont marine anemone where it gets shelter, as do the Amphiprion, to avoid the predators.

With its 17 cm of length in the females, the Premnas biaculeatus is the biggest clownfish.

The males stop at 12-15 cm unless a later transformation in females. As a matter of fact, it is a protandrous hermaphrodite species. At birth in fact the fishes are all males but growing they may change of sex. Their livery, from bright red gets then darker on the sides tending to brown and finally becoming almost black with age. Anyway, are present in both sexes three white vertical bands edged black that totally wrap the body. The first, wider on the head, is at the level of the operculum, the second at about mid fish in correspondence with the small depression of the dorsal fin, and the third on the caudal peduncle.

Usually, the actinia hosts only one couple, but if the Entacmaea quadricolor is big, to the spouses, the only ones allowed to reproduce, may add other immature males of lesser size to form a small community headed by the female. When this one passes away, in a few weeks the reproducing male becomes female, whilst the second male in the hierarchy per size, takes its place. 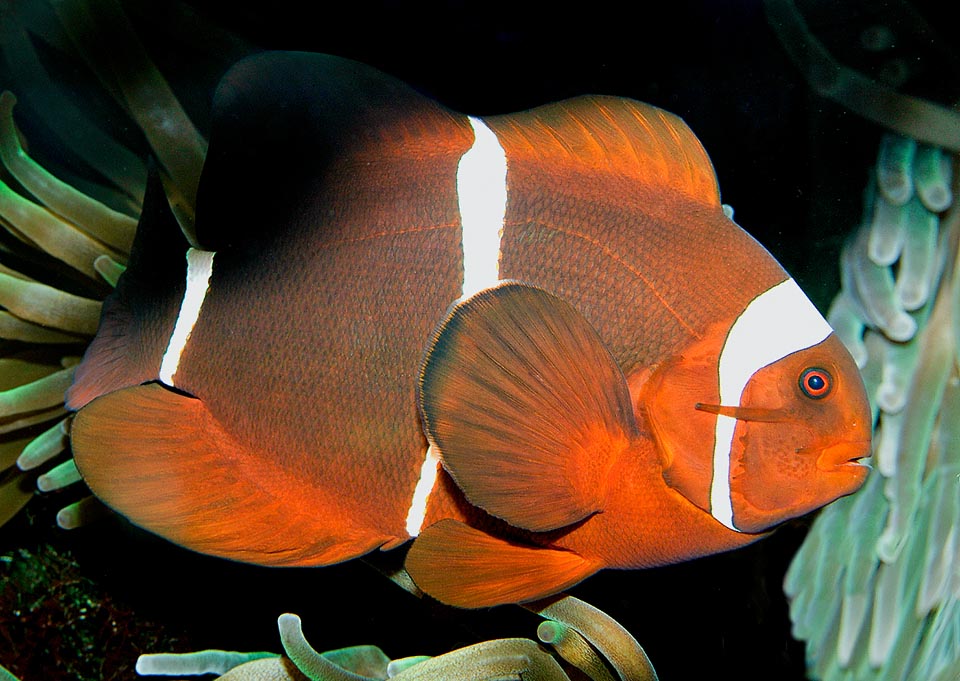 The females measure even 17 cm but the males, if not changing of sex, contempt of 12-15 cm. The anemone hosts the initial couple and the young non reproductive males. It differs from the other clown fishes, belonging to the genus Amphiprion, for the presence, on both sides, of a showy long spine under the eyes © Giuseppe Mazza

The Premnas biaculeatus nourishes mainly of plankton and of benthic algae. Moreover, it cleans the anemone of small parasitic crustaceans giving it in exchange feces rich of nitrogen that feed the algae symbiont of the host. Finally oxygenates it with its continuous diurnal movement around the shelter, driving out the fishes, such as the Chaetodon, that bite the tentacles and attracting the attention with its showy livery of small curious fishes that contribute to the diet of the Entacmaea quadricolor. The Maroon clownfish, from its part, is immune to the poison thanks to a protective mucus.

The reproduction takes place usually in an improvised nest placed at the base of the support of the anemone. The spouse, in the indifference of the lower ranking males, fecundates the 100-1000 eggs glued by the female and stands the watch to predators aerating them with the fins up to the hatching, usually occurring after 6-7 days in correspondence to the full moon or the black one, when the tide reaches its top and bigger is the dispersion of the larvae. They are already able to swim and hide after 1-2 weeks and the kids have a life expectancy of 6-10 years. 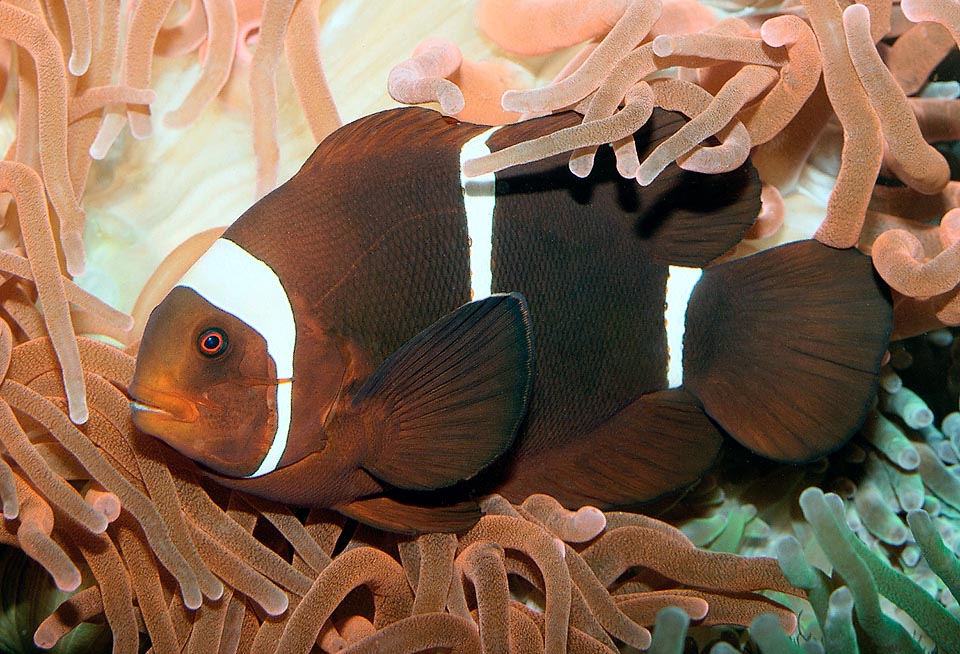 Apart the three white vertical bands edged in black, the females are darker on the sides, almost up to black and lay hundreds of eggs that hatch in the full moon © G. Mazza

Premnas biaculeatus has reproduced in captivity, but it is an aquarium fish relatively expensive, also because it is necessary to purchase it together with the anemone.

The resilience of the species is average, seen that are necessary 1,4-4,4 years for doubling the members decimated by the events. The vulnerability index, relatively low, marks nowadays (2020) 27 on a scale of 100.