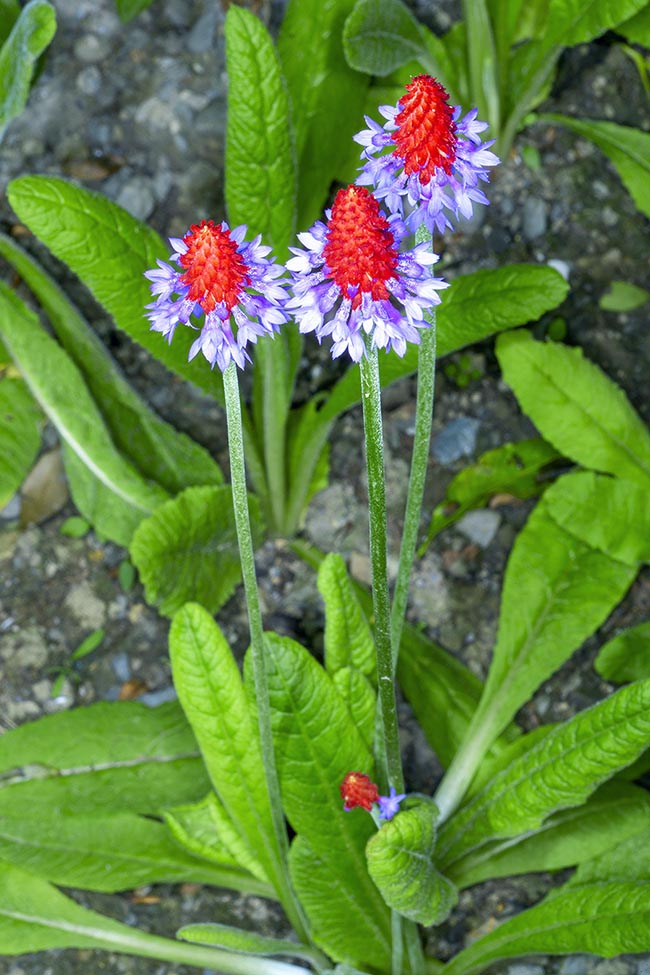 Endemic to the mountains of Sichuan and Yunnan (China), Primula vialii has an unmistakable inflorescence © Giuseppe Mazza

Easily identifiable by its striking conical inflorescences with red apex, Vial’s Primrose, Primula vialii Delavay ex Franch. (1891), is an alpine plant endemic to the southwest of Sichuan and north and northwest of Yunnan (China), where it grows in wet meadows between 2800 and 4000 m of altitude.

It belongs to the family Primulaceae, integrated in a strict sense by about 23 genera and almost 1000 species, mainly distributed in the northern hemisphere, with numerous species from mountainous areas.

This family is characterized by its gamopetalous flowers (that is, with fused petals), with epipetalous stamens (inserted on the base of the corolla but not on the receptacle) opposite to the corolla lobes and in the same number, ovary superior with free-central placentation (the ovules are fixed to a central axis within the ovary, which is unilocular, i.e., without septa) and fruit capsules.

In a broad sense, it contains 68 genera and almost 2,800 species (according to The Plant List, 2013) after being merged with three other families from temperate and tropical regions (Myrsinaceae, Theophrastaceae and Maesaceae).

According to the classification system of the Angiosperm Phylogeny Group (2016), this family belongs to the order Ericales, within the clade Asterides.

Primula comprises about 500 species from the temperate regions of the northern hemisphere, although some species are distributed in tropical mountainous areas. They are generally perennial herbs with simple glabrous to farinose leaves, forming a rosette, and with flowers arranged in umbels, racemes or spikes at the apex of leafless stems (scape).

The calyx is tubular or campanulate, often angled, 5-toothed. The corolla is formed by a cylindrical tube and a flat or campanulate limb, with 5 whole or emarginated lobes, white, yellow, pink, magenta or violet. The 5 stamens do not protrude from the corolla tube. The fruit is a globose to cylindrical capsule, dehiscent by valves or teeth and contains numerous small seeds.

Linnaeus, a practical man, created the genus Primula by simplifying the generic name Primula veris used by Tournefort and turning the latter into the scientific name for its type species, Primula veris L. The name comes from the Latin “primus” and “primulus” = first, for being one of the first plants to flower at the beginning of spring (Latin “ver, veris”).

Primula vialii was discovered in the Yunnan mountains by Pierre Jean Marie Delavay (1834-1895), french missionary, botanist, and indefatigable collector of plants in China. Delavay sent some 200,000 herbarium sheets to France, from which some 1,500 new species of plants were described, many of them by the botanist Adrien René Franchet (1834-1900). Franchet published the name of this species in honor of Paul Vial (1855-1917), also a missionary in Yunnan. 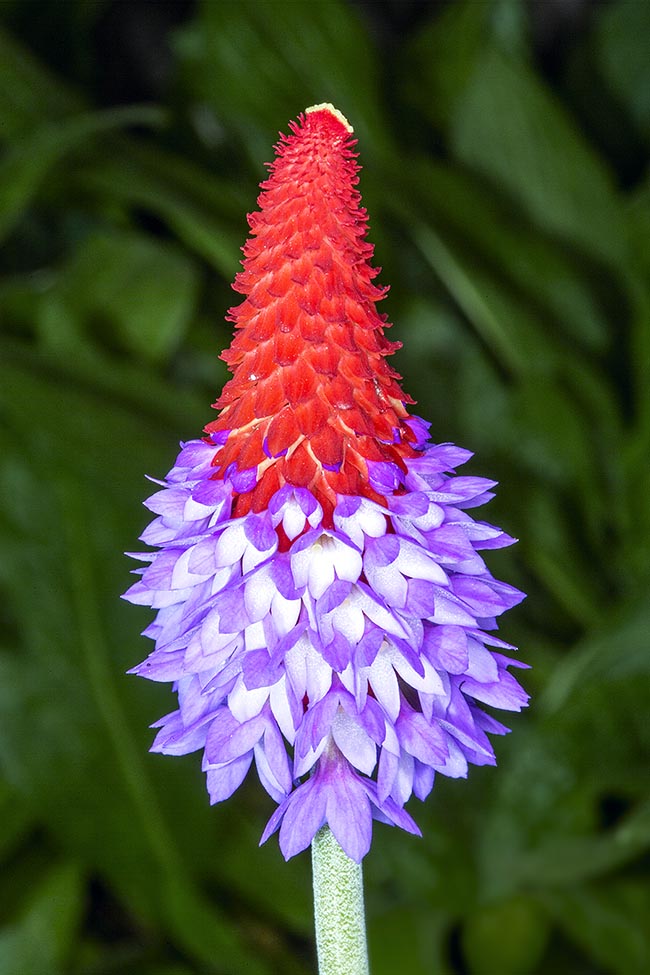 Similar to an orchid, it grows in wet meadows at 2800-4000 m altitude. It has given rise to several cultivars © Giuseppe Mazza

Some 300 species of Primula are known in China, many of them endemic to the mountains of southeastern China, a region considered as one of the 36 hotspots of biodiversity. New species of this genus (and many others) continue to be discovered in this region.

Primula vialii has erect, elliptical to oblanceolate leaves of 10-30 x 2-4 cm, light green, with winged petiole up to ½ the length of the lamina, which is pubescent, with a wrinkled surface and a rounded apex.

It belongs to a group of species with sessile flowers with a more or less zygomorphic calyx, facing downwards and spirally arranged in spicate inflorescences.

It is easily distinguished by the narrowly pyramidal shape of its dense spikes, up to 5 cm in length and with numerous flowers, and by the color contrast between the lower half, with opened pink-purple flowers and the upper half, with garnet-colored flower buds. The corolla is funnel-shaped and consists of a tube up to 9 mm long and a limb 5-6 mm wide, with elliptic lobes with acute apex. The calyx is wide and garnet in color.

The scape is robust and glabrous, somewhat farinose at the upper end, up to 60 cm in height. The spike elongates to twice or more when the capsules develop, which are globular in shape.

Due to the resemblance of its inflorescence to that of some orchids, such as Anacamptis pyramidalis, this plant is also called the Orchid Primrose (Italian: Primula orchidea; French: Primevère orchidée; English: Orchid primrose; German: Orchideenprimel).

Primula vialii, like many species of the genus Primula, presents two types of flowers (morphs) with styles of different lengths, so that the stigma is below (short-styled or thrum) or above (long-styled or pin) the anthers. All flowers on each individual plant share the same morph.

Generally, stigmas and anthers of opposite morphs are at the same height. This phenomenon, called heterostyly, favors cross-pollination between opposite morphs and is usually associated with a self-incompatibility mechanism that prevents self-fertilization.

It is considered a rare plant in its natural habitat, although it has not yet been evaluated according to IUCN criteria.

Due to its attractive inflorescences and the ease of propagation by seeds, Primula vialii is a popular plant among enthusiasts of alpine species. The seeds are sown in early spring on a moist but well-drained substrate rich in organic matter. It can grow on partial shade, on the banks of streams or ponds, or in sunny places as long as the soil remains moist. It blooms from June to August.

‘Alison Holland’ is a cultivar with white flowers and greenish calyces.